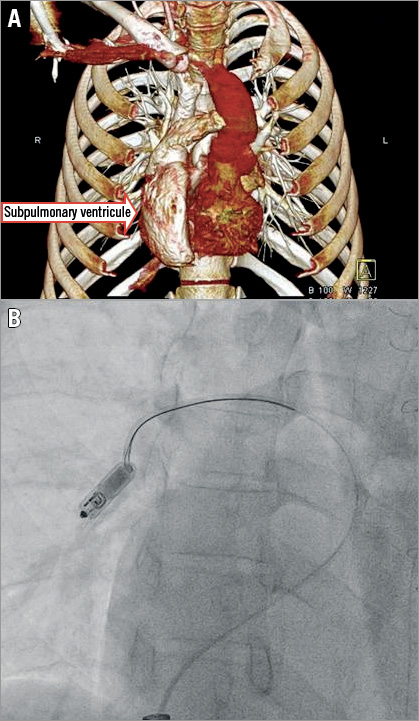 Use of the Micra™ leadless pacemaker (Medtronic, Minneapolis, MN, USA) continues to increase and is associated with new clinical challenges1,2; however, Micra escape during implantation has never before been experienced.

In a 30-year-old male with congenitally corrected transposition of the great arteries, ventricular septal defect, pulmonary stenosis and dextrocardia, after surgical ventricular septal defect closure and pulmonary arteriotomy (heart computed tomography with volume rendering reconstruction is shown in Panel A) and with permanent complete atrioventricular block, after many years of both epicardial and endocardial pacing, a decision to implant a leadless pacemaker was made.

Implantation was performed according to the manufacturer’s training recommendation via the right femoral access. An interventricular patch precluded a septal location, recommended as first choice and, after many repositions of the device, it was deployed on the inferior wall in the subpulmonary ventricle. As only the tether was released, the Micra changed its position slightly and the pacing threshold increased >5V, so repositioning with a LASSO® catheter (Biosense Webster, Inc., Irvine, CA, USA), using the technique described by Gerdes et al3, was attempted. An interaction of the steerable Agilis™ NxT steerable introducer (St. Jude Medical, St. Paul, MN, USA) and snare released the device and it floated into a primary right pulmonary artery (PA) branch with the retrieval feature facing upstream (Moving image 1). The left femoral venous access was used. A Micra introducer (23 Fr inner diameter, 27 Fr outer diameter) was introduced and its tip placed in the low right atrium (RA). A right coronary guiding catheter (JR4, 6 Fr, 100 cm, Launcher™; Medtronic) was used to pass into the left PA from the RA. A guiding catheter was then exchanged for the wedge pressure catheter over a stiff wire. With an air-filled balloon, attempts were made to pass the catheter over the wire from the RA into the PA and back, to ensure that passage between the tricuspid chordae was avoided. The wedge catheter was then exchanged back for the coronary guiding catheter, which was directed into the right pulmonary artery branch where the Micra had stopped. The catheter tip was positioned in front of the Micra. The 15-20 mm snare (125 cm, Multi-Snare®; pfm medical, Cologne, Germany) was then introduced over the catheter (through a y-connector). The Micra was snared around its retrieval feature (Panel B) and then easily withdrawn into the RA, pulled into the 23 Fr sheath and outside the patient’s body (Moving image 2). The same venous access was used to re-implant a new Micra device in the apical position. No complications occurred and the patient was discharged home.

In summary, Micra snaring and retrieval after complete tether removal have been described previously, though this concerned the device still fixed in the right ventricle3. We faced the very first experience of uncontrolled dislodgement to the pulmonary artery of a Micra pacemaker with subsequent safe percutaneous Micra docking and retrieval. Potential reasons for pacemaker escape were: an atypical subpulmonary ventricle endocardium structure and patch precluding implantation in the septal position, a Micra catheter loop too large for the inferior wall location, producing insufficient force to fix the Micra and slightly faster tether pulling against the resistance. A learning curve should be taken into account and extensive catheter flushing and heparinisation should be recommended. All steps of Micra implantation must be performed with extreme caution, especially in anatomically atypical cases.

M. Sterliński and A. Oręziak report receiving fees from Biotronik, Medtronic, St. Jude Medical/Abbott. The other authors have no conflicts of interest to declare.

Moving image 1. Micra escape from the right ventricle inferior wall to the pulmonary artery while snaring was being attempted. Recorded in the right anterior oblique view 50°.

Moving image 2. The escaped Micra pacemaker snared by the proximal retrieval feature and being pulled down from the primary right pulmonary artery branch to the Micra sheath introducer. Recorded in the right anterior oblique view 50°.