We present the case of an 80-year-old male with atrial fibrillation with stroke/transient aphasia despite oral anticoagulation and an implanted Amplatzer LAA occluder (St. Jude Medical, St. Paul, MN, USA) from an external hospital. Control by transoesophageal echocardiography (TEE) before discharge revealed that the device had migrated into the aortic arch, almost completely obliterating the lumen of the aorta. The occluder’s orientation was lobe proximal, disc distal (Figure 1A-Figure 1C).

The aim was to capture the distally localised micro-screw of the disc. The disc maintains a distance between the lobe with its sharp stabilising wires at the edge and the aortic wall, as it has a greater diameter than the lobe. 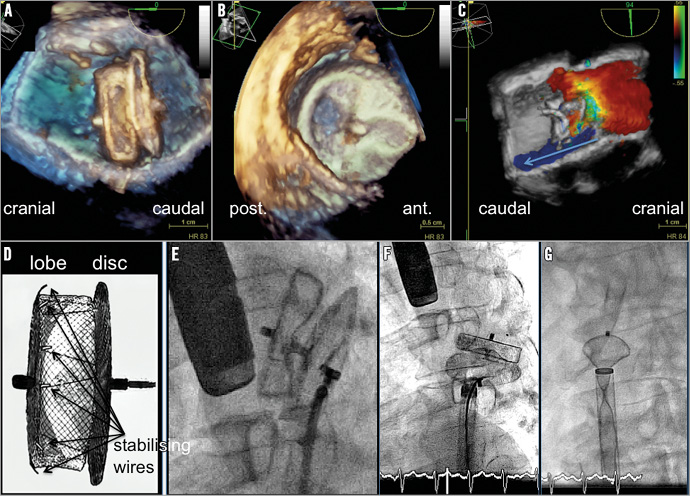 Figure 1. Multimodal imaging of the procedure. A-C) 3D transoesophageal echocardiogram (3D-TEE) demonstrating the occluder in the aortic long and short axis view. The occluder is localised within the descending part of the aortic arch. The diameter of the aorta is only 2 mm more than the width of the disc. The colour Doppler 3D-TEE demonstrates the reduced aortic flow passing the device. D) Construction of the Amplatzer Amulet left atrial appendage (LAA) occluder. The stabilising wires to fix the device within the LAA are marked (arrows). E) Fluoroscopic documentation of the device captured by a snare catheter at the micro-screw of the disc. F) The snare catheter gripped the micro-screw of the device from the side, which forced the device to move diagonally and therefore lateral to the entrance of the sheath. G) After further careful retrieval of the whole system (captured device, snare, sheath) into the abdominal aorta, the orientation of the device was optimised for retraction.