Aims: The primary patency of superficial femoral artery (SFA) stents is evaluated by measuring PSVR. However, each trial uses a different definition of PSVR. We investigated the impact of changing PSVR thresholds on the patency rates of SFA recanalisation with self-expanding nitinol stents.

Conclusions: PSVR definition may influence the reported long-term patency rate of a SFA stent. We should consider the definition of restenosis in each trial.

A single-centre retrospective study was conducted. Between 2003 and 2006, 76 consecutive patients (83 limbs) were treated using nitinol self-expanding stents (SMART; Cordis Corporation, Miami Lakes, FL, USA) for symptomatic SFA disease (Rutherford categories 2-5) that affected their quality of life in spite of exercise and optimised medications3. The patients gave consent to a follow-up DUS examination at Kishiwada Tokushukai Hospital. We excluded patients who underwent stenting for restenosis and those who presented with acute limb ischaemia. The study protocol was designed in accordance with the Declaration of Helsinki, and it was approved by the ethics committee of our hospital. Written informed consent was obtained from every patient.

Endovascular therapy (EVT) was performed percutaneously, mostly using a crossover technique with a 6 Fr sheath. Prior to the intervention, 5,000 units of unfractionated heparin were administered to maintain the activated clotting time at more than 250 seconds. A 0.014 inch or 0.035 inch guidewire was advanced and the lesion crossed. An optimally sized balloon was employed and dilated. The stent size was selected to be 1-2 mm larger than the diameter of the reference vessel. Aspirin (100 mg/day) and clopidogrel (75 mg) or ticlopidine (200 mg/day) were administered two days prior to the procedure and were continued for at least one month.

Patients received DUS within 30 days of the intervention and at six-month intervals thereafter. Lesion patency was evaluated by DUS examination.

High-resolution duplex scanning was performed on an ultrasound machine (Aplio; Toshiba Corporation, Tokyo, Japan) with a 7.5 MHz linear transducer by six investigators with at least two years of experience in peripheral vascular duplex scanning. PSVR was calculated by dividing velocity measured at the point of maximum stenosis by velocity in the closest adjacent normal vessel segment. The angle of incidence of the Doppler beam to the flow was maintained at less than 60 degrees. 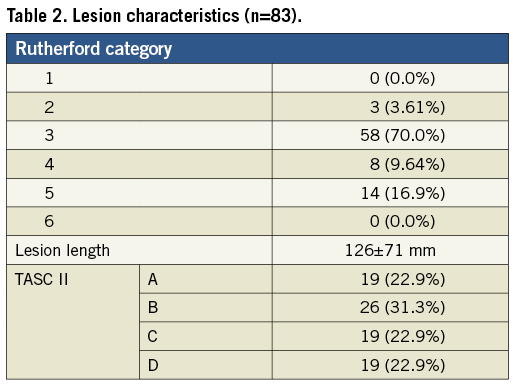 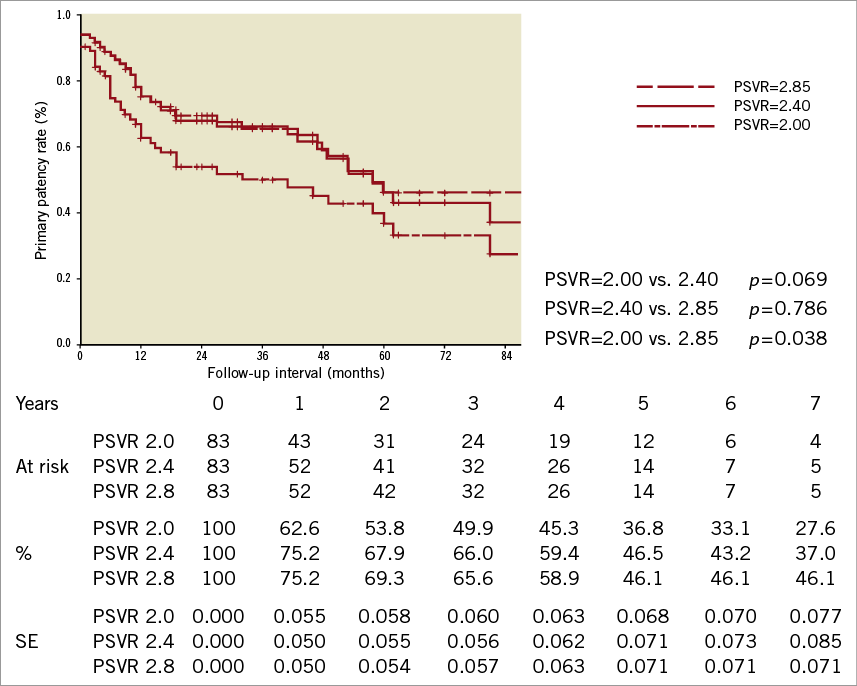 The use of EVT for lower extremity ischaemia has become widespread because of technological advances, and the strategy of revascularisation has shifted from surgical treatment towards EVT6-9. Considerable advances in EVT technology for SFA disease include the dramatic increase in the use of nitinol stents, which have become the standard of care to date because of the results obtained from randomised trials10,11.

Recently, many trials have been conducted on SFA stents, and some of these trials have been completed. We were able to select new-generation stents based on the results of these trials. When interpreting the results of recent SFA studies, we must consider the PSVR definitions used by each study. To clarify this confusion regarding PSVR definitions, we have conducted this study. There are conflicting data regarding the benefits of femoral stenting. Many studies are currently in progress to examine the use of other self-expanding stent platforms for patients with intermittent claudication and rest pain. However, each of these trials uses their own PSVR definition for the evaluation of the patency rate. In this report we show the impact of changing PSVR thresholds on the patency rates of SFA.

We have to do a rethink on the optimal PSVR to detect restenosis, but the problem with evaluating restenosis is that its definition is different in each trial. This could be the basis of confusing results in terms of the patency rate for each stent. However, each stent design has a different stiffness, which may influence the PSVR.

This was a retrospective study. The number of patients followed in the chronic phase was relatively small. This study might lack statistical power to confirm the differences between groups. Further investigation of new-generation stents is needed in the near future.

When we compare trials for the purpose of selecting a new stent that has a better patency rate with less restenosis, we should consider the definition of restenosis in each of the trials that we are examining.