Aims: To examine the efficacy and durability of an interwoven self-expanding nitinol stent in the treatment of complex femoropopliteal artery lesions in unselected patients.

Methods and results: Five hundred and twenty-seven limbs in 470 patients with femoropopliteal arterial disease were treated with SUPERA stents. Follow-up data were prospectively collected in a single-centre registry and were available for 439 patients (492 limbs). The patients were followed by Doppler ultrasound, stent roentgenograms, estimation of Rutherford-Becker class (RBC) and ankle-brachial index (ABI). Total occlusions were present in 277 limbs (52.6%) and 52.4% had either moderate or severe calcification. The mean lesion length was 126.4 mm. The primary patency (PP) rates were 83.3% after 12 months and 72.8% at two years. The secondary patency rates were 98.1% after 12 months and 92.0% at two years. Patency rates did not differ between superficial femoral artery (SFA) and popliteal lesions. Between baseline and a mean of 21 months of follow-up, mean ABI increased from 0.53 to 0.91, and mean RBC decreased from 3.0 to 1.9 (p<0.001 for both comparisons). Radiographs performed on 229 patients at a mean of 16.6 months confirmed the absence of stent fractures in all patients.

Conclusions: Over a two-year surveillance period, the patency rate and fracture resistance of SUPERA stents implanted for complex femoropopliteal artery disease were high.

Endovascular therapy is one option endorsed by current guidelines1,2 for the treatment of symptomatic femoropopliteal artery disease. However, data supporting specific therapies are still scarce.

There is some evidence that, particularly for non-focal lesions of the superficial femoral artery (SFA), patency rates after systematic primary stenting are significantly higher than after balloon dilatation and provisional stenting3. Based on the available clinical evidence4-6, implantation of nitinol stents into the femoropopliteal arteries has become a widely used technique overall resulting in improved clinical outcome of percutaneous procedures.

In contrast, there is still a relative uncertainty about the role of endovascular stenting in the popliteal artery and its efficacy in long lesions or calcified arterial segments. Particularly after treatment of long lesions, restenosis, kinking, compression and stent fractures remain an important concern. In the FESTO registry7, the incidence of stent fractures increased with lesion length, and major stent fractures were associated with restenosis. The same was observed in the DURABILITY I study4. In addition, a recently published 2012 article on the STELLA study for long lesions8 reported patency rates of 66% with a nearly 18% fracture rate, and the DURABILITY-200 study9 demonstrated a 65% patency rate with a 6% fracture rate.

The objective of this registry was to evaluate the efficacy and integrity of an interwoven vascular mimetic nitinol stent designed to withstand the compression, torsion, bending, lengthening and shortening found within the femoropopliteal segment. To derive both scientifically and clinically meaningful information for this “real-world” patient population, the registry intentionally allowed enrolment of a wide range of obstructions, including long lesions, total occlusions and highly calcified vessels, without pre-specified inclusion or exclusion criteria.

Five hundred and twenty-seven limbs in 470 patients with femoropopliteal artery disease were treated with percutaneous transluminal angioplasty (PTA) followed by implantation of SUPERA stents (IDEV Technologies, Inc., Webster, TX, USA) in one vascular centre between June 2007 and October 2011. The decision to implant SUPERA stents was left to the operator’s judgement, although the general indications after primary PTA were followed, including haemodynamically severe residual stenosis, flow-limiting dissection or elastic recoil.

The ABI was calculated and duplex ultrasound studies were performed, followed by angiography of the infrainguinal arteries to outline the vascular anatomy and define the lesion characteristics. The popliteal artery segments are defined as follows: P1 segment from intercondylar fossa to proximal edge of patella; P2 segment from proximal part of patella to centre of knee joint space; P3 segment (below knee popliteal artery) from centre of knee joint space to origin of anterior tibial artery. Degree of calcification was assessed routinely. It was graded on the basis of the amount of calcium deposits visible during fluoroscopy: a) mild for <5 mm calcium deposits in the vessel wall, b) moderate for >5 mm deposits, and c) severe for deposits filling up the entire vessel diameter.

In accordance with the institutional and local regulatory policies, all patients signed a written informed consent before undergoing the procedure.

There were no formal inclusion or exclusion criteria specified for this analysis other than that a SUPERA stent was implanted into the femoropopliteal segment to treat symptomatic de novo or restenotic lesions. Recipients of other stents during the index intervention were excluded from the analysis.

The SUPERA stent system included a 7 Fr, and in the last years a 6 Fr coaxial delivery system with the pre-mounted stent. A detailed description of the system and of its deployment method has been published previously6. All lesions were predilated, and balloon size was determined by visual estimation. While post-dilatation was left to the discretion of the operator, predilatation was generally recommended. Additional devices were used at the investigator’s discretion: Rotarex (Straub Medical AG, Wangs, Switzerland) and thrombolysis were used in lesions with thrombotic material. The Outback device (Cordis, Johnson & Johnson, Warren, NJ, USA) was utilised if crossing the lesion was not possible by conventional means. Inflow and outflow lesions were treated if they were significant.

The antithrombotic regimen was administered according to the usual institutional practices. Periprocedural anticoagulation with ≥5,000 U of heparin was recommended. Dual antiplatelet therapy with clopidogrel and aspirin was administered for at least four weeks after the procedure, with the recommendation to continue aspirin indefinitely.

All patients were evaluated before their discharge from the hospital, and were scheduled to return for ambulatory follow-up visits according to our institutional standards at six and 12 months after the index procedure and every year thereafter for five years. The angiograms were analysed with regard to lesion properties (lesion location, lesion length, vessel diameter, degree of stenosis and calcification) by a single investigator (AP). At the follow-up visits, patients underwent physical examinations, estimates of RBC, ABI calculation and duplex ultrasound studies for the detection of restenoses. Not all patients were willing or able to return for the follow-up examinations (Figure 1): eight patients with eight treated limbs died before the first follow-up examination, and 23 patients (27 limbs) were lost to follow-up for unknown reasons. Duplex ultrasound and clinical assessment were available for 364 of the remaining 439 patients (412 limbs out of 492). In 75 patients, clinical assessment was performed by telephone contact. The duplex ultrasound recordings were analysed by an investigator who was not involved in the initial treatment procedure. A peak systolic velocity ratio ≥2.4 (corresponding to a ≥50% decrease in vessel diameter11) was used for the diagnosis of binary restenosis. To confirm the integrity of the stent, plain roentgenographic images of the stented segment were obtained in 229 patients (304 stents). This assessment was part of our routine follow-up protocol until 2010 and was typically performed at 12 to 24 months after the index procedure. 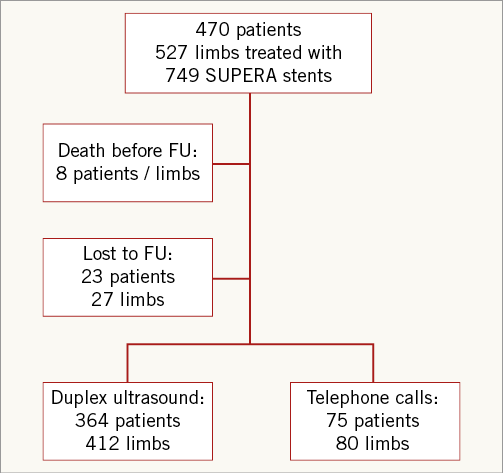 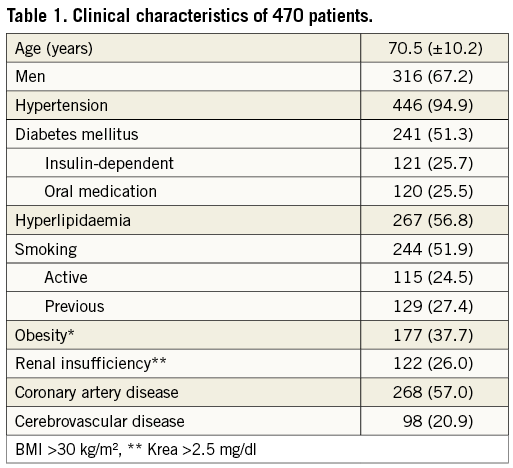 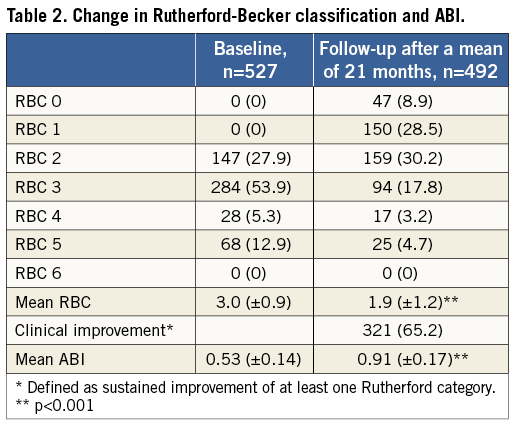 A visually estimated residual arterial stenosis <30% was achieved in 522 cases (99.1%). Procedure-related complications were recorded in 7.2% of the cases (Table 4). 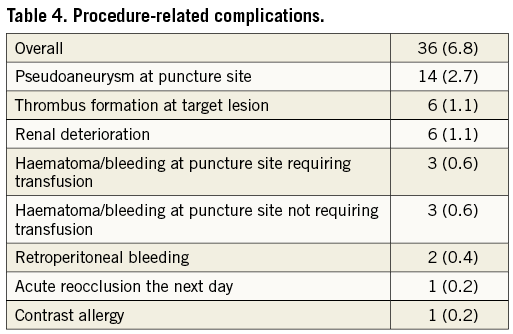 The Kaplan-Meier estimates of primary, assisted primary and secondary stent patency at 12 months were 83.3%, 98.1% and 88.8%, respectively (Table 5). At two years, primary stent patency, secondary stent patency and freedom from TLR were 72.8%, 92.0% and 79.0%, respectively. The graphic displays of cumulative rates of primary and secondary stent patency and freedom from TLR are shown in Figure 3A. The influence of patient or lesion characteristics and procedural details on primary stent patency was analysed using Cox regression analysis. Patients with in-stent stenosis (p=0.04; 12-month PP 67.3%), impaired below-the-knee (BTK) run-off via collaterals only (p=0.04; 12-month PP 66.7%), and retrograde recanalisation (p=0.03; 12-month PP 66.3%) had a significantly higher risk of restenosis. There was a tendency towards more favourable patency rates in shorter lesions (Table 5), although this did not reach significance (p=0.06). PP rates of the SUPERA stent did not differ between the popliteal segments (p=0.35) or between SFA and popliteal lesions (p=0.88; Figure 3B).

The ABI increased from 0.53±0.14 before the stent implantation procedure to 0.91±0.17 at 21 months (Table 3). These changes in RBC and ABI from baseline were highly statistically significant (p<0.001). Follow-up radiographs of 304 stents, obtained in 229 patients at a mean follow-up of 16.6 months, confirmed the absence of stent fractures in 100% of examinations.

We report on the midterm results of a prospective cohort of patients treated with SUPERA vascular mimetic stents for symptomatic femoropopliteal artery disease. The PP rates of 83.3% and 72.8% after one and two years of follow-up, respectively, are very encouraging and are favourable compared to those reported in other SFA stenting trials3-5,12-15.

Maintaining patency after recanalisation of complex femoropopliteal lesions remains one of the greatest challenges of endovascular therapy. The introduction of nitinol stents for treatment of the SFA has resulted in markedly improved acute and midterm results at least for lesions with a length up to around 15 cm3,5,13,15. For longer lesions patency results with standard nitinol tubular stents were less convincing, and the reported issue of stent fractures with these nitinol stents raised concerns about the suitability of stenting for these complex lesions7,14. 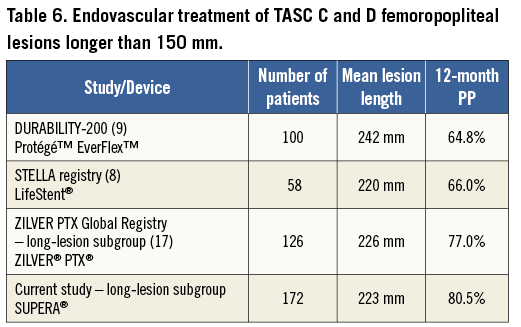 Besides lesion length and location in the distal femoropopliteal segment, several other factors added to the complexity of the lesions treated in this patient cohort: more than 50% of lesions were total occlusions, which are known to be associated with markedly higher restenosis rates18. This is a higher proportion of total occlusions than in other contemporary SFA stenting trials3-5,13,15,19. Despite the high prevalence of severe or moderate arterial calcification (52.4%), acute luminal gain was achieved in 99.1% of the cases, which is attributable to the high radial strength of the SUPERA stent.

In a previous analysis6 of its use in the femoropopliteal segment, the SUPERA stent has been shown to have very good patency rates up to two years. However, this analysis was confined to 107 patients. The present study was performed on a larger patient population of more than 500 limbs and thereby allows identification of variables that might influence the device’s patency. Shorter lesions showed somewhat better results in terms of stent patency, although this effect did not reach significance. The following factors were identified as significant predictors of patency loss: treatment of an in-stent restenosis, retrograde recanalisation and impaired infrapopliteal run-off. While outflow via the infrapopliteal arteries is a known factor influencing the outcome of femoropopliteal procedures20, little is known on the outcome of retrograde techniques and about the best treatment strategy for in-stent stenosis21. The need for retrograde recanalisation seems to be a marker of more complex lesion morphology. The lower patency rate for patients following retrograde recanalisation confirms results from former studies about retrograde transpopliteal recanalisation22. These conditions underline the broad all-comers intention of this study, which included patients presenting with a wide variety of complex lesions in the femoropopliteal arteries.

Treatment of femoropopliteal arterial disease using a self-expanding interwoven nitinol stent resulted in a favourable midterm patency rate and durability. The SUPERA stent proved to perform well in a large variety of patients and lesions, especially in long lesions, and in patients with tissue loss and with a large proportion of calcified arteries and total occlusions, with no stent fractures observed. Sustained clinical improvement and a low TLR rate underline the efficacy of this device for the treatment of symptomatic femoropopliteal artery disease and also for CLI patients. Limitations of the data presented include the retrospective single-arm, single-centre design of the analysis. However, the large number of patients and the broad clinical spectrum of included cases without pre-specified inclusion and exclusion criteria give a good “real-world” impression of the performance of the SUPERA stent in the femoropopliteal segment and is one of the largest reported cohorts to date on stent-based treatment in this vascular bed. Further evidence, in the form of randomised controlled trials, is needed to confirm these encouraging results.

D. Scheinert and A. Schmidt are consultants for IDEV Technologies. The other authors have no conflicts of interest to declare.