Conclusions: PES appears to be more efficient in reducing angiographic and clinical restenosis in dialysis patients compared with SES.

Patients with end-stage renal disease (ESRD) have been reported to have higher rates of mortality and other adverse cardiovascular events after percutaneous coronary intervention (PCI)1-3. Drug-eluting stents (DES) have reduced the incidence of restenosis and the need for repeat revascularisation compared with bare-metal stents (BMS)4,5. However, many clinical trials evaluating DES have deliberately excluded patients with ESRD such that data relating to PCI outcomes in these high-risk patients are lacking. Only some retrospective studies have reported that sirolimus-eluting stents (SES) failed to demonstrate lower angiographic or clinical restenosis rates compared to BMS treatment in dialysis patients6-9. It remains unclear whether there are differences in outcomes between patients treated with paclitaxel-eluting stents (PES) or SES in this subset of patients. The objective of this study was to investigate the clinical outcomes of DES in patients on dialysis between two-distanced time-frames, those of a late group receiving PES and an early group receiving SES.

From May 2004, SES (Cypher, Cordis, Johnson & Johnson, Miami Lakes, FL, USA) was adopted in Tsuchiya General Hospital (Hiroshima, Japan), and was implanted in 2,193 patients until the end of December 2008. Of these, 191 patients undergoing maintenance dialysis were treated with SES, and 184 patients were treated with SES alone for the treatment of native coronary artery disease. Dialysis was defined as regular haemodialysis or peritoneal dialysis for at least one month. Patients were treated with DES unless target vessel diameters were ≥4 mm or ≤2.25 mm, because these DES sizes were not approved in Japan. In patients presenting with acute myocardial infarction (MI), stent selection was left to the operator’s discretion. BMS were implanted in 51 dialysis patients prior to May 2007. After May 2007 and through the end of December 2008 , PES (TAXUS, Boston Scientific, Natick, MA, USA) was adopted, and was implanted in 343 patients. Because we had failed to demonstrate lower restenosis rates of SES than those of BMS in dialysis patients9, PES rather than SES were implanted in dialysis patients as a default strategy from May 2007. One hundred and three dialysis patients were treated with PES, and 95 patients were PES alone for the treatment of native coronary arteries. BMS were implanted in 23 dialysis patients after May 2007. Both artery or vein graft lesions were excluded, and primary PCI for acute coronary syndrome were included. We investigated 1-year clinical outcomes of 95 patients with PES alone, and 184 patients with SES alone between two-distanced time-frames. Written, informed consent was obtained from all patients, and the protocol had the approval of the local hospital Research Ethics Committee.

All interventions were done according to standard techniques, and all decisions concerning the PCI strategy were made by an experienced interventional cardiologist (YH) based on the morphology of the target lesions. If a patient had a highly calcified lesion detected by angiography or intravascular ultrasound (IVUS), rotational atherectomy (Rotablator; Boston Scientific, Natick, MA, USA) was performed prior to stenting. Procedural success was defined as an immediate percent diameter stenosis <50% without an associated in-hospital major adverse cardiac event (MACE). Aspirin (≥81 mg daily) indefinitely and thienopyridine (200 mg of ticlopidine or 75 mg of clopidogrel daily) for at least six months were administered as an adjunct antiplatelet therapy.

Clinical follow-up information was obtained from medical records, by questionnaires sent to local physicians or by telephone contact. The Academic Research Consortium (ARC) definition of definite or probable stent thrombosis was used as the endpoint for stent thrombosis13. MI during follow-up was diagnosed as serum creatinine kinase levels >3-fold the upper limit of the normal range or the presence of new Q-waves on the electrocardiogram. Target lesion revascularisation (TLR) was defined as any repeat PCI or surgical bypass of the original target lesion. The target lesion was considered to be the area covered by the stent plus 5-mm margins proximal and distal to the edges of the implanted stent. We evaluated 1-year MACE including cardiac death, MI, stent thrombosis and TLR. When >1 clinical endpoint occurred in a patient, only the first event was counted for the event free survival analysis.

Baseline characteristics of the study population are listed in Table 1. 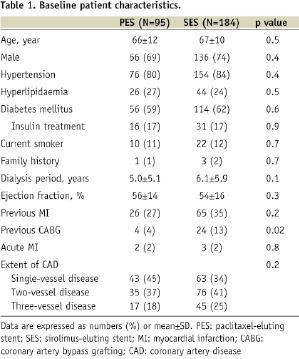 There was no significant difference except that previous coronary artery bypass grafting (CABG) was more common in the SES group (p=0.02). Importantly, more than 80% of patients had hypertension and approximately 60% had diabetes in each group. Angiographic and procedural characteristics are summarised in Table 2. 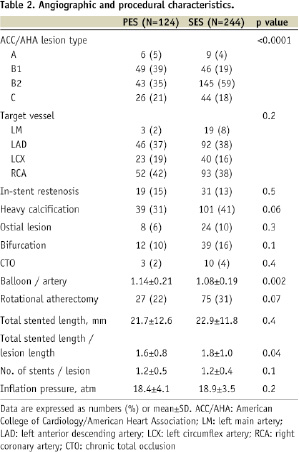 There were no significant differences between the two groups except for ACC/AHA lesion type, in which B1 lesions were more frequently observed in the PES group and B2 lesions were more frequent in the SES group (p<0.0001). In terms of procedure, balloon to artery ratio was larger in the PES group (p=0.002). The two groups were treated with similar total stented length. Total stented length per lesion length was larger in the SES group (p=0.04). Table 3 summarises the quantitative angiographic data at baseline and immediately post-procedure. 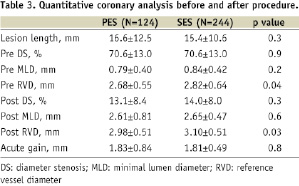 PES were more frequently implanted in small vessels compared with SES (p=0.04). There were no significant differences in post-procedure MLD between the two groups.

During hospitalisation, all cause death was more frequently observed in the PES group (p=0.004). In the PES group, six patients died (three of ischaemic colitis, one of hyperkalaemia, one of infection, and one of heart failure). In the SES group, one patient died of hyperkalaemia. However, both groups had low incidence of MACE (Table 4). 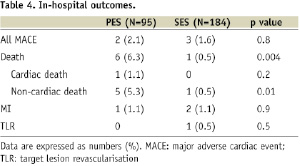 Six-month angiographic follow-up was obtained in 71% of the PES group and 75% of the SES group. The results are shown in Table 5. 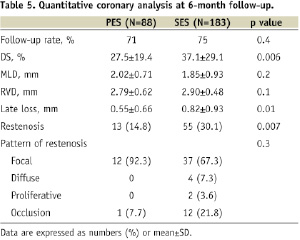 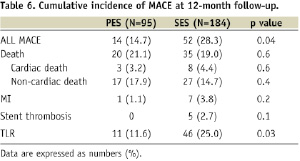 Cardiac death was observed in three patients in the PES group (two of heart failure and one of sudden death at 238 days after procedure) and eight in the SES group (three of heart failure, two of definite stent thrombosis, one of probable stent thrombosis, one of acute myocardial infarction, and one of sudden death at 180 days after procedure). Definite or probable stent thrombosis was observed in five patients of the SES group (two early and three late). All patients experiencing stent thrombosis had diabetes and four of them had undergone implantation of multiple stents. TLR was significantly reduced in the PES group (11.6% vs. 25.0%, p=0.03). Dual antiplatelet therapy was maintained in 79% of the PES group and 81% of the SES group at one year (p=0.7). Kaplan-Meier curves of cumulative incidences of MACE are shown in Figure 1 and there was a significant difference between the two groups in favour of PES (p=0.04). 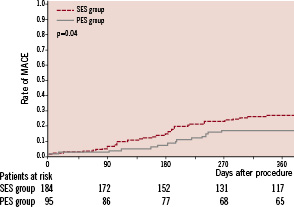 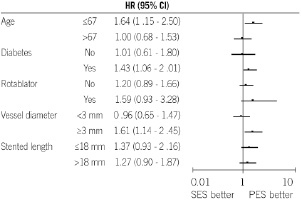 In patients who underwent rotational atherectomy prior to stenting, PES showed a trend toward lower incidence of MACE (11.1% vs. 30.7%, HR 1.59, 95% CI 0.93-3.28). Finally, multivariate analysis revealed that diabetes, smoking, age, and the use of SES were independent predictors of TLR (Table 7).

In this retrospective study of patients with renal failure undergoing maintenance dialysis, we found that the incidence of MACE in the PES group was lower than that in the SES group, mainly due to a reduction of TLR. According to a previous report, patients with renal insufficiency treated with SES have a significantly higher rate of MACE, especially if they are on dialysis (mild; 10.8%, moderate; 18.8%, dialysis; 38.7%, p=0.0002) at eight months following SES implantation, mainly due to high rates of target vessel revascularisation (TVR). In addition, there were progressive increases in late lumen loss at eight months (mild; 0.16±0.44 mm, moderate; 0.33±0.61 mm, dialysis; 0.81±0.88 mm, p<0.0001)14. In this study, the late loss in the SES group (0.82 ± 0.93 mm) was comparable to Nakazawa’s report14. In support of our findings, patients recruited in the TAXUS-IV trial with moderate renal insufficiency did not have an associated increase in 1-year MACE (normal; 9.7%, mild; 10.7%, moderate; 13.1%), TVR (normal; 6.9%, mild; 8.0%, moderate; 6.6%), or late loss (normal; 0.37±0.49 mm, mild; 0.42±0.53 mm, moderate; 0.41±0.45 mm) at nine months following PES implantation although patients with serum creatinine >2.0 mg/dl and patients undergoing dialysis were excluded in this study15.

The presence of heavy coronary calcification is also important. Among dialysis patients, treatment with rotational atherectomy prior to SES implantation was associated with a similarly high incidence of TLR to that with rotational atherectomy prior to BMS implantation, which suggests limited effects of SES in this particular population22. Stent under expansion is the most common mechanism of SES restenosis according to IVUS analysis, however, there are no data regarding the impact of stent under expansion on restenosis after PES implantation23. In the TAXUS-IV trial, 19% of lesions had moderate or severe calcification and the absolute angiographic restenosis rate after PES implantation in calcified and non-calcified lesions was similar24.

In this study, more than 80% of patients had hypertension and approximately 60% had diabetes in each group. In previous Japanese studies, among patients who were treated with DES and on dialysis, hypertension was observed as a comorbidity ranged from 55% to 87% and diabetes ranged from 55% to 73%7-9, which were comparable to the present study among the dialysis population. In-hospital mortality was higher in the PES group than in the SES group, mainly because of ischaemic colitis in three patients. A possible mechanism may have been micro- or macro-embolism from shaggy aorta. The reason why it occurred in the PES group was not known. However, the in-hospital cardiac death was seen only in one patient and none in the PES and SES group, respectively. Also, the numbers of events were very low. The excessive non-cardiac death might be a random occurrence.

Paclitaxel is a microtubule-stabilising agent with potent activity against smooth muscle cell proliferation, migration, and signal transduction25. The mechanisms by which PES might be superior to SES in dialysis patients remain unclear. However, the antirestenotic effects of paclitaxel may benefit dialysis patients who have thrombogenic and inflammatory coronary profiles especially in diabetic patients.

First, this study was a non-randomised retrospective single centre registry. There were some significant or borderline significant differences in baseline characteristics between the two populations. Second, a treatment bias also existed. Some procedural characteristics (balloon/artery, total stented length/lesion length, and rotational atherectomy) were significantly, or borderline significantly, different between the two groups. Third, TLR events in the present study included both clinically driven and angiographically driven events. Finally, the rate of follow-up angiography was relatively low because of the high mortality rates (>19% both in the two groups mainly occurred due to non-cardiac cause). The higher angiographic follow-up in the SES group compared to the PES group could be a bias for greater TLR in the SES group. To date, few clinical outcome data are available comparing DES stent types in dialysis patients. To the best of our knowledge this study is the first to highlight the favourable performance of PES in this challenging patient population. Nonetheless, further randomised, multicentre studies are required to confirm these observations.

In this retrospective cohort analysis, MACE and TLR appeared to be reduced at one year in PES-treated compared to SES-treated dialysis patients. The risk of stent thrombosis, MI and cardiac death was not significantly different between the two groups.