Aims: Due to the limitations of 12-lead ECG, occlusions of the left circumflex artery (LCX) are more likely to present as non-ST-elevation acute coronary syndrome (NSTEACS) compared with other coronary arteries. We aimed to study mortality in patients with LCX lesions and to assess the importance of coronary artery dominance on triage of these patients.

In patients with ST-segment elevation myocardial infarction (STEMI) rapid revascularisation with either primary percutaneous coronary intervention or fibrinolysis is of major importance to both survival and the risk of subsequent development of heart failure1,2. An acute myocardial infarction (MI) caused by occlusion of the left circumflex coronary artery (LCX) might, due to the limitations of standard 12-lead ECG, be classified more often as non-ST-elevation acute coronary syndrome (NSTEACS) than occlusions of the right coronary artery (RCA) or left anterior descending (LAD) artery. The sensitivity of the electrocardiogram is between 70-92% in patients with STEMI and acute occlusion of either the RCA or LAD. However, in patients with acute thrombotic occlusion of the LCX the sensitivity is much lower, because ST-segment elevation is only detected in 32-48% of these patients3-6. It has therefore been hypothesised that some patients classified as LCX-NSTEACS may, in reality, suffer LCX-STEMI, and as a result have worse outcomes than patients with either RCA or LAD occlusions who are treated with immediate revascularisation according to STEMI guidelines7-11.

To overcome the limitations of the ECG in identifying LCX occlusions the use of V7-V9 leads has been proposed5. However, the role of differences in anatomically dominant coronary arteries as to whether LCX lesions present as STEMI or NSTEACS remains unclear.

The Eastern Danish Heart Registry is a mandatory registry for all hospitals located in Eastern Denmark providing cardiac catheterisation and coronary revascularisation. The clinical database, Patients Analysis and Tracking System® (PATS; Dendrite Clinical Systems Ltd, London, United Kingdom), includes coronary catheterisation and coronary revascularisation databases. These databases have recorded coronary angiographies and PCIs since 1998. In this study, mortality data were obtained from the Danish Centralised Civil Registration System which is continuously recording vital events concerning the entire Danish population. Patient records include a personal and unique 10-digit number assigned at birth, resulting in an extremely high level of subsequent event tracing. The diagnoses of STEMI or NSTEACS were made according to the guidelines and used to triage patients in the catheterisation laboratory12. STEMI patients were referred to revascularisation according to angina symptoms and ST-elevation in two contiguous leads on the 12-lead ECG or new left bundle branch block. NSTEACS, on the other hand, were referred according to symptoms of angina, ECG changes (without ST-elevation) and/or troponin leak. The operating physician and assistants entered the personal 10-digit number, patient history, demographics, coronary angiograms, and PCI procedural data into the clinical databases in direct relation to the acquisition of the angiogram and PCI procedures.

All STEMI and NSTEACS patients examined using coronary angiography between December 1998 and November 2011 (n=20,504) were identified in the cohort. We used data from STEMI and NSTEACS patients with single-vessel myocardial infarction (n=7,304) who had coronary angiography performed and were followed for mortality for a median of 4.7 years (37,324 patient-years). We could not identify with certainty the culprit artery in NSTEACS multivessel disease. Thus, for correct identification of the culprit artery, we only included patients with single-vessel disease. Patients with culprit lesions in the left main artery and patients primarily treated with coronary bypass surgery were excluded. Patients below the age of 40 were excluded due to too few events and too little comorbidity. This study was approved by the Regional Scientific Ethics Committee (reference number 2007-58-0015).

To investigate the differences in short-term and long-term mortality which are expected due to misclassification of LCX occlusions we designed the following analyses. First, all LCX-STEMI lesions were compared with LCX-NSTEACS and, as sensitivity analyses, RCA and LAD lesions were compared between STEMI and NSTEACS. As another sensitivity analysis, we examined LCX-STEMI occlusions (99%-100%) with LCX-NSTEACS occlusions. Finally, as an exploratory analysis, mortality in LCX- NSTEACS lesions was compared with mortality in RCA-NSTEACS and LAD-NSTEACS lesions, in order to assess whether mortality in LCX-NSTEACS would be higher due to the presence of LCX-STEMIs in this group.

Patient characteristics are reported as means with standard deviations (SD) or frequencies expressed as percentages, as appropriate. The chi-square test was used for categorical variables and the Wilcoxon rank test for continuous variables. Survival analyses were performed using the Kaplan-Meier method, the log-rank test and Cox regression. Short-term mortality was analysed within the first 30 days while censoring all event times after 30 days (n=7,304). Independent analyses were performed to evaluate long-term survival in the subset of patients who survived the first 30 days (n=7,114). Cox regression analyses were adjusted for age groups (40-50, 50-60, 60-70, 70-80, >80), sex, dominance of coronary circulation, diabetes, hypertension, hyperlipidaemia, smoking, stroke, history of myocardial infarction, body mass index (BMI), and peripheral vascular disease.

Missing values in the predictor variables were imputed using a multiple imputation approach based on chained equations13. Multiple imputations of missing values were used because data were not missing completely at random, and therefore the complete case analysis is biased14. For completeness, complete case results are presented in the supplemental material (Online Table 1, Online Table 2). All imputation models included all predictor variables and outcome information in the form of the predicted cumulative hazard evaluated at the end of follow-up and the status at the end of follow-up (dead or alive) as recommended by White and Royston15. Results are presented as hazard ratios (HR) with 95% confidence intervals based on Rubin’s rule by pooling 100 Cox regression analyses based on 100 completed data sets.

A two-tailed p<0.05 was considered significant. All analyses were performed with R (R Foundation for Statistical Computing, Vienna, Austria); the multiple imputation analysis was carried out with the R-package, mice13.

MORTALITY IN STEMI VS. NSTEACS IN RCA AND LAD LESIONS 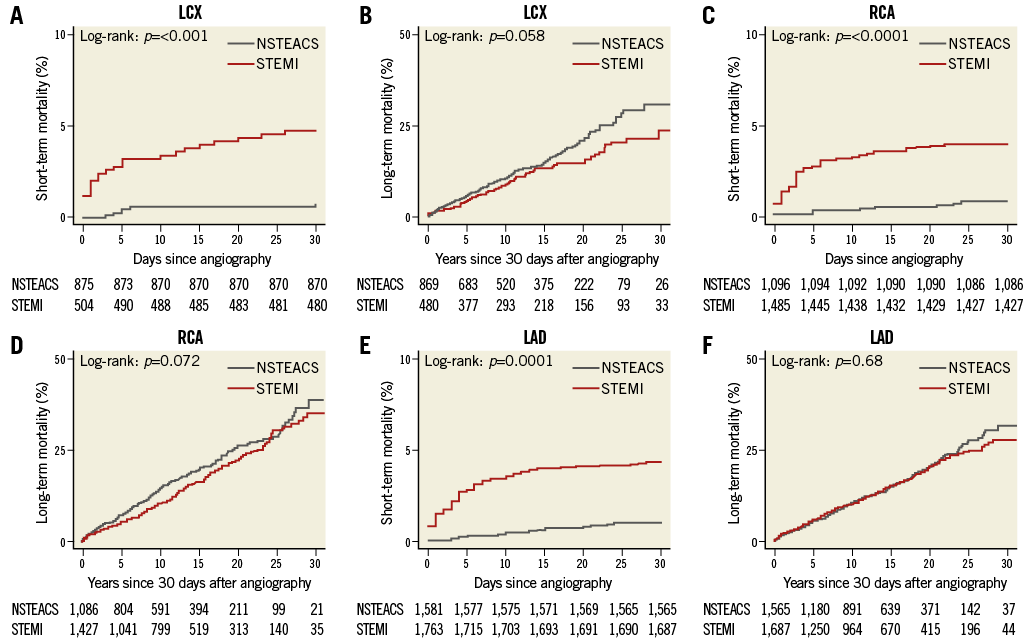 MORTALITY IN NSTEACS ACCORDING TO CULPRIT VESSEL LOCATION 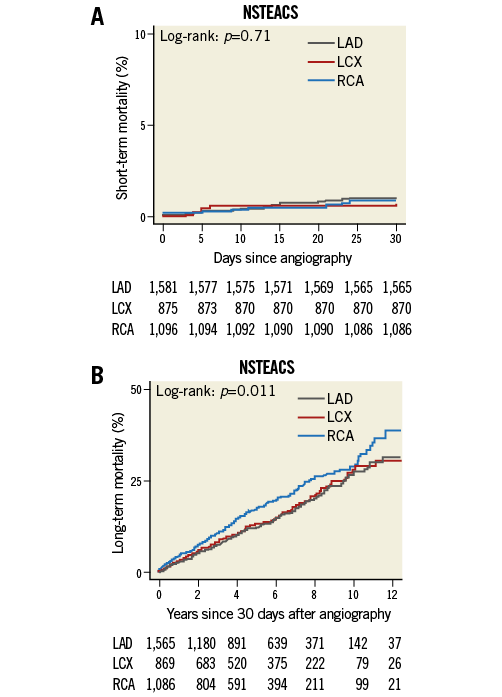 This study has three significant findings. The first main finding is that in patients with MI and left dominant coronary arteries LCX lesions often present as STEMI while LCX-NSTEACS lesions are mainly seen in right dominant coronary arteries. The second main finding is that patients with LCX lesions presenting as NSTEACS have lower 30-day mortality than patients presenting with LCX-STEMI. After 30 days, LCX-NSTEACS and LCX-STEMI patients have similar long-term mortality. Thirdly, no difference in mortality was seen when comparing LCX-NSTEACS with lesions in other coronary territories. Finally, our study confirmed previous studies regarding the uneven distribution of infarct-related arteries in STEMI, showing that LCX was the culprit in 13% of STEMIs compared with 25% in NSTEACS16.

We found that whether LCX lesions appear as STEMI or NSTEACS depends on the coronary anatomy. LCX-STEMI is more frequently seen in the left dominant coronary artery while LCX-NSTEACS is prevalent in the right dominant coronary artery. In a left dominant coronary artery, the posterior descending artery (PDA) comes from the LCX, while in a right dominant coronary artery the PDA comes from the RCA. Therefore, in a left dominant artery an acute occlusion of the LCX might be seen more often as ST-elevations in inferior leads of the ECG, while in a right dominant artery a posterior infarction due to an acute LCX occlusion might not be discovered by the electrocardiogram17. Another, more likely, explanation could be that perhaps the larger flow requirements in dominant LCX produce greater shear stress across the stenosis, resulting in more serious plaque rupture. It has previously been suggested that acute plaque ruptures leading to occlusion occur less often in the LCX territory than in the RCA and LAD due to the difference in wall shear stress between vessels18,19. It seems likely that right coronary artery dominance may provide a protective effect for occlusions of the LCX by minimising the infarct size. These results may not be surprising per se, but to our knowledge this is the first time this has been reported in a sufficiently sized study.

O’Keefe et al proposed that “if patients with acute LCX infarction without ST-segment elevation can be identified and revascularised, they will benefit as much as those with LAD or right coronary artery infarction with ST-segment elevation”10. Our study suggests that patients with STEMI had worse outcomes during the first 30 days subsequent to the myocardial infarction in all three vascular territories compared with patients with NSTEACS, with no difference in the long-term outcome between STEMI and NSTEACS - irrespective of culprit lesion location. The lower 30-day mortality in LCX-NSTEACS was also seen when we compared entirely occluded LCX lesions in NSTEACS with STEMI. This sensitivity analysis was conducted to make certain that comparison of occluded LCX-NSTEACS, which may be considered more high-risk than non-occluded LCX-NSTEACS lesions, showed similar results. The initial high risk of death in STEMI has been attributed to a relatively large myocardial area at risk and a large infarct size in STEMI16,20. In a study of fatal infarcts, Lee et al showed that the size of the infarct was directly related to the area at risk21.

This study also provided confirmatory knowledge about the distribution of infarct-related arteries in STEMI, showing that LCX as culprit in STEMIs is underrepresented compared with NSTEACS. The LCX is the culprit lesion in only 13% of cases compared with RCA and LAD being culprit lesions in 40% and 47% of cases, respectively. In five STEMI trials, Krishnaswamy et al found that LCX occlusion caused only 15% of STEMIs and that the LAD, RCA and LCX were equally distributed as culprit lesions in studies of NSTEACS22. The explanation for the low prevalence of LCX-STEMIs could be that 80% of patients have a right dominant coronary artery. However, previous studies have shown a uniform distribution of the culprit lesion in NSTEACS9,23. We found LCX to be the culprit in only 25% of cases, while RCA and LAD were the culprit lesions in approximately 31% and 44% of cases, respectively. A possible explanation for this difference could be that we restricted our report to focus on single-vessel disease only whereas other studies reported multivessel disease22-26.

As in any observational study, there is a risk of selection bias and residual confounding. We included patients who were examined with coronary angiography, and therefore we may have underestimated mortality among patients with LCX lesions who, for whatever reason, did not have angiography performed. An example could be referral patterns. LCX-NSTEACS patients who are potentially LCX-STEMIs could, in theory, be referred to the local non-PCI hospital without ever being referred to the PCI centre (either because they died, were too sick, or had absolute contraindications). Although this is probably a minor issue, we were unable to capture these cases.

However, since 2002, all STEMIs are revascularised with PCI in Denmark and in the vast majority of instances patients with NSTEACS receive PCI within 72 hours. Due to the small distances in Denmark, thrombolysis as a treatment of MI is almost non-existent.

Another limitation of the study is that the study population was constituted entirely of patients with single-vessel disease and the study may not, therefore, have identified all LCX-STEMIs which were misclassified as NSTEACS. On the other hand, this choice assured the location of the culprit artery in patients with NSTEACS. A final limitation is the change in treatment patterns over time. However, sensitivity analyses subdividing time periods between 1998 to 2004, and 2005 to 2011 did not suggest any marked difference in survival (data not shown).

The study was funded by the European Union INTERREG IVA Programme and the Novo Nordisk Foundation.