Aims: Percutaneous revascularisation triage has not been evaluated in randomised controlled trials of patients with non-ST-segment elevation acute coronary syndromes (NSTE-ACS) and multivessel disease. As a result, current guidelines are not available. The objective of our meta-analysis was to investigate the use of percutaneous coronary intervention (PCI) in culprit and non-culprit vessels.

Conclusions: No significant difference was demonstrated in the long-term risk of myocardial infarction and mortality between multivessel PCI and culprit vessel PCI. Therefore, multivessel PCI may be a safe and reasonable option for NSTE-ACS patients with multivessel disease.

We performed an electronic literature search from the beginning to January 2, 2014 in MEDLINE, Cochrane Library, Embase, ISI Web of Knowledge and Google Scholar, using the term “multivessel” paired with the following: “acute coronary syndrome”, “myocardial infarction”, “revascularisation”, “angioplasty”, “stents”, “invasive”, “culprit” “single-vessel”, “single vessel” or “percutaneous coronary intervention”. Abstract lists from the scientific meetings of the American College of Cardiology, the European Society of Cardiology, and Transcatheter Cardiovascular Therapeutics, as well as published review articles, editorials, and internet-based sources of information on studies of interest, including www.tctmd.com and www.theheart.org, were also reviewed.

All literature searches were independently reviewed by two authors (Qiao Y and Li WJ) to identify relevant studies which met the inclusion criteria. Disparities were resolved by discussion. Information was extracted using a standardised protocol and reporting form with regard to the study design, indicators of quality, baseline clinical characteristics, procedural details, and clinical and safety outcomes. For studies which reported results at multiple time points, the data from the longest follow-up time were included in the analysis. Authors were contacted in case of incomplete or unclear data.

The internal validity and quality of the included studies were appraised according to Newcastle-Ottawa Scales (NOS) for cohort studies, by two independent reviewers aware of the study origin and journal, with divergences resolved after consensus. This quality assessment tool consists of three domains, including selection of the exposed and unexposed cohort (maximum: four stars), comparability of the two cohorts (maximum: two stars), and outcome assessment (maximum: three stars)5,6 (Table 1).

Multivessel disease was defined as a significant stenosis in ≥2 major epicardial vessels in all studies, and significant stenosis was defined as >50% stenosis in all the studies except for one, which used 70%7. The endpoints of interest were all-cause mortality and major adverse cardiac events (MACE), which included myocardial infarction, unplanned revascularisation and mortality. Long term was defined as more than six months. Unless otherwise specified, mortality included both cardiac and non-cardiac death. MI, multivessel disease and culprit lesion were defined as reported in the studies.

Results from each trial were organised into a two by two table to permit calculation of effect sizes for multivessel PCI and culprit vessel PCI. All data were pooled at the study level, because patient level data were not available. Such pooling has previously been demonstrated to be valid for estimating pooled treatment effect8. Statistical heterogeneity of treatment effects between studies was formally tested using Cochran’s test (p<0.100) and the I2 statistic. We considered I2 >50% to indicate significant heterogeneity between studies9. Fixed-effect models were used to calculate across-study odds ratios (OR) with 95% confidence intervals of primary and secondary endpoints, if there was no significant heterogeneity, or for random-effect models10. The Begg and Mazumdar adjusted rank correlation test with funnel plot was performed to test for publication bias11. Statistical analyses were performed using Stata software version 12.0 (StataCorp, College Station, TX, USA). 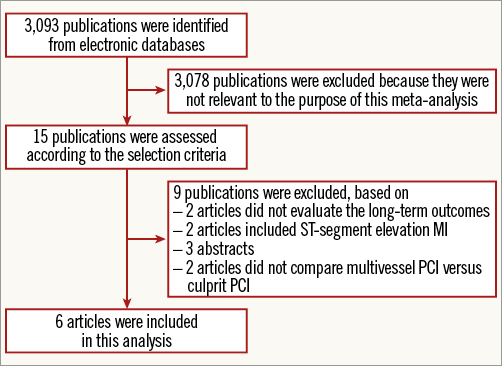 Figure 1. Flow diagram of the inclusion and exclusion process used in the meta-analysis.

Six controlled studies with 5,414 subjects were included in our meta-analysis7,17-21. Long-term follow-up was available in all studies. The main characteristics of the included studies are shown in Table 2. The baseline characteristics of the studies are listed in Table 3. Multivessel PCI was described as performing culprit and non-culprit vessel PCI during the same index hospitalisation. 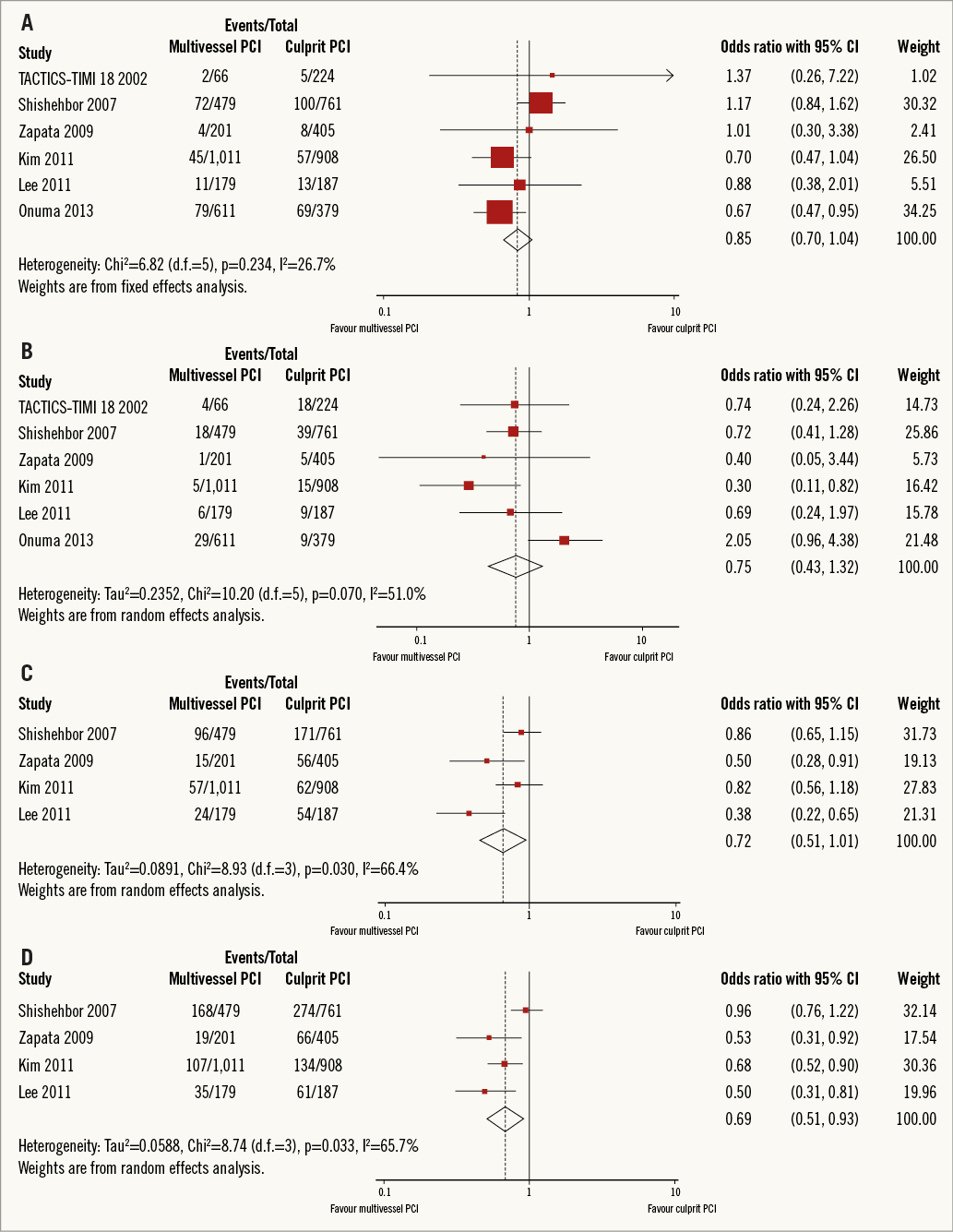 The incidence of myocardial infarction ranged from 0.5% to 6.1% in the multivessel PCI arm, and from 1.2% to 8.0% in the culprit vessel PCI arm. Multivessel PCI did not significantly decrease the long-term risk of myocardial infarction (OR, 0.75; 95% CI: 0.43 to 1.32; p=0.319) (Figure 2B) compared to culprit vessel PCI. This calculation was performed using a random-effect model because of significant heterogeneity across studies (I2=51%, p=0.070).

Major adverse cardiac events occurred in 9.5% to 35.1% of patients in the multivessel PCI arm, and 14.8% to 36.0% of patients in the culprit vessel PCI arm. Two studies were not included in this analysis because data on MACE were not available17,21. Multivessel PCI significantly reduced the long-term risk of MACE (OR, 0.69; 95% CI: 0.51 to 0.93; p=0.015) (Figure 2D) compared with culprit vessel PCI. This calculation was performed using a random-effect model because of significant heterogeneity of treatment effects across studies (I2=65.7%, p=0.033).

The main finding of this meta-analysis was that multivessel PCI was associated with a 36% reduction in unplanned revascularisation and a 31% reduction in the risk of MACE at long-term follow-up compared with culprit vessel PCI. No difference was observed in the risk of all-cause mortality or MI.

Myocardial revascularisation for NSTE-ACS relieves symptoms, shortens hospital stay, and improves prognosis. It has become the preferred choice, especially in high-risk patients. About 40%~60% of NSTE-ACS patients have multivessel disease, which is associated with a higher risk of serious cardiac events22-24. It is not clear whether stenting non-culprit lesions after culprit lesion PCI is beneficial in preventing future adverse cardiac events. There are concerns regarding the potential risks of contrast-induced nephropathy and periprocedural MI when performing multivessel PCI13. Patients presenting with ACS have widespread inflammation and are in a prothrombotic state. Hence, additional stenting may further increase the risk of stent thrombosis25. However, no randomised trial has been conducted to compare the safety and efficacy of multivessel PCI involving suitable non-culprit vessels with that of culprit vessel PCI.

In deciding the revascularisation strategies for performing culprit only or multivessel PCI, operators should consider important clinical characteristics including age, comorbidity, lesion characteristics, renal function, haemodynamics, costs, local reimbursement rules, time point and duration of the procedure, etc. However, the decision to perform multivessel PCI was made by the operators, and detailed information was not available in the studies included in our meta-analysis. Furthermore, cardiogenic shock in patients with multivessel disease is associated with increased hospital mortality26,27. The European Society of Cardiology guidelines28 recommend attempting multivessel PCI in selected patients with multiple critical lesions in the setting of cardiogenic shock. Only one study20 excluded cardiogenic shock patients, and other studies did not provide cardiogenic shock-related data in the included studies. All these factors may have influenced the final outcome of the meta-analysis because of the inherent defects of the studies included.

These results corroborate earlier observational studies demonstrating no major difference in the risk of all-cause mortality and MI in NSTE-ACS patients with multivessel disease treated with multivessel PCI and culprit vessel PCI. Moreover, multivessel PCI may be associated with significant reductions in MACE, mainly owing to concordant reductions in unplanned revascularisations. This study supports the use of multivessel PCI during the index hospitalisation as a safe option. Whether these effects apply to different patient subgroups and types of drug-eluting stent merits further investigation in a randomised trial.

This meta-analysis included both prospective and retrospective studies because no randomised trial was available. Study-level meta-analysis cannot overcome the inherent limitations of individual trials by pooling treatment effect estimates to generate a single best estimate. We could not pool multivariable adjusted risk estimates because only three studies were adjusted with a uniform adjusted model, which may also reduce the power of the meta-analysis. The inclusion of studies with different designs introduced heterogeneity into the results. Heterogeneity could be related to the different study criteria used for treatment and the different endpoint definitions. In most studies, PCI strategy was influenced by patient characteristics, which could not be corrected for. There were limited data regarding haemodynamics in the included studies, so subgroup analyses could not be performed. The confounding factors could not be adjusted because the adjusted model in individual studies varied, which may lead to bias. The results and conclusions should be interpreted with these limitations in mind.