Previous midterm follow-up reports after implantation of the Absorb™ everolimus-eluting bioresorbable scaffold (BRS; Abbott Vascular, Santa Clara, CA, USA) in stable coronary artery disease and acute coronary syndrome have shown an increase of scaffold thrombosis leading to an excess of the device-oriented composite endpoint (DOCE: a composite of cardiac death, target vessel myocardial infarction [TVMI], and clinically driven target lesion revascularisation [CD-TLR])1. In contrast, in the six-month primary report of ABSORB STEMI: the TROFI II Study (NCT01986803)2, which randomised patients with ST-elevation myocardial infarction (STEMI) to receive either the Absorb BRS or the XIENCE metallic everolimus-eluting stent (EES; Abbott Vascular), optical frequency domain imaging (OFDI)-derived healing score was comparable between the BRS arm and the EES arm. The aim of this report was to present the three-year clinical outcome results of the BRS and the metallic EES at the time when full resorption of the scaffold device can be expected.

The trial design and methods, as well as the study population, have been described in previous reports2. Follow-up information at three years was available in 100% of the study population (Figure 1). All clinical events were adjudicated by an independent clinical events adjudication committee. Time-to-event variables were compared by log-rank test. 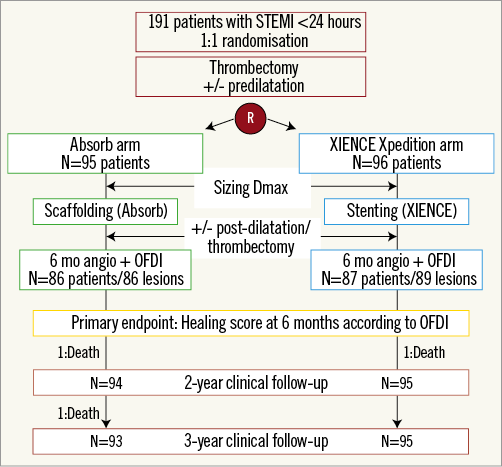 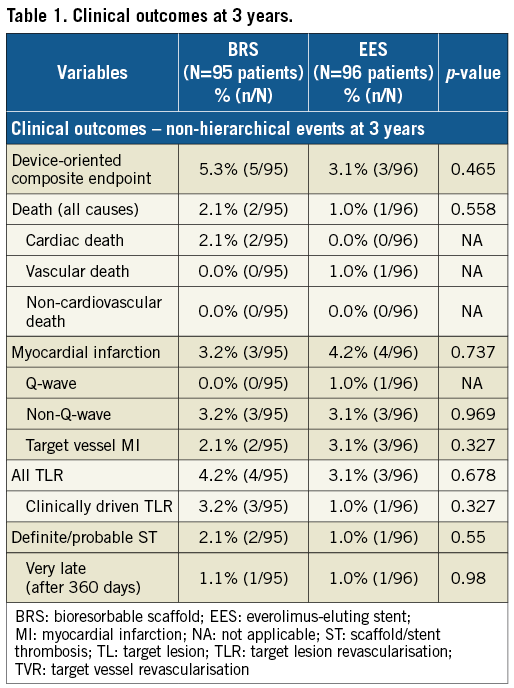 There were two cardiac deaths (2.1%) in the BRS arm: one was adjudicated as cardiac death on day 280 since no information was available as the patient died overseas. The autopsy of the second patient who died on day 999 revealed no evidence of scaffold thrombosis. There were no cardiac deaths in the EES arm.

Three years after implantation of BRS or EES, in the setting of primary PCI, the rates of DOCE and ST were low and not significantly different between both arms. It is of note that there were no cases of ST after two years, while most of the patients in both arms discontinued dual antiplatelet therapy between one and two years (Supplementary Table 1). The three-year clinical results are in line with the comparable OFDI-derived healing scores2 and neointimal quality3 at six months. In addition, the recent report in the subpopulation of the current cohort showed a better vasomotion in BRS than in EES and similar microcirculatory function as well as healing score at three years4.

Although routine thrombectomy is not recommended in the recent guidelines, in treating STEMI patients with BRS, thrombectomy could facilitate better scaffold sizing to achieve better long-term outcome.

The trial was not powered to evaluate clinical endpoints. The implantation technique reflects the state of the art at the time of enrolment in 2014 and did not take into account the more recent findings on BRS usage in terms of size selection, lesion preparation and deployment technique. It remains to be elucidated whether the comparative clinical outcomes in this study performed in STEMI patients will be maintained after three years.

Three years after implantation of BRS or EES, in the setting of primary PCI, the rates of DOCE and ST were low and not significantly different between both arms. The three-year clinical results are in line with the comparable healing scores observed at six months. However, the study was not powered to assess clinical endpoints.

The TROFI II trial was sponsored by the ECRI and supported with unrestricted grants from Terumo Europe N.V. and Abbott Vascular.

Supplementary Table 1. Proportion of patients on dual antiplatelet therapy at 1-, 2-, and 3-year follow-up.

Percutaneous coronary and structural interventions in women: a position statement from the EAPCI Women Committee