Methods and results: This observational and retrospective study included 235 consecutive STEMI patients treated with BRS, compared with 235 STEMI patients treated with EES from the EXAMINATION trial, by applying propensity score matching. The primary endpoint was a device-oriented endpoint (DOCE), including cardiac death, target vessel myocardial infarction and target lesion revascularisation at five-year follow-up. Device thrombosis, according to the ARC criteria, was also evaluated. Optical coherence tomography (OCT) analysis was also performed at five years in event-free BRS patients. The cumulative incidence of five-year DOCE was higher in the BRS group as compared to the EES group (13.2% vs 7.6%, HR 1.87, 95% CI: 0.94-3.44, p=0.071), mainly driven by a higher rate of TLR (7.6% vs 1.7%, HR 1.15, 95% CI: 0.44-2.30, p=0.004). The five-year definite BRS thrombosis rate was also higher as compared to EES (4.2% vs 1.2%, HR 3.49, 95% CI: 0.95-12.82, p=0.054). OCT analysis showed a high incidence of neoatherosclerosis in the BRS group.

Conclusions: The five-year event risk was higher with BRS versus EES in STEMI. This suggests that the probability of obtaining favourable results at very long-term follow-up is low. Whether better results will be obtained with new-generation BVS remains to be determined.

Analysis of data from four major randomised trials using poly-lactide-based BRS (Absorb BVS) have shown non-inferior outcomes to contemporary metallic drug-eluting stents in patients with stable coronary artery disease at short-term follow-up. However, they raised concerns about increased rates of target vessel-related myocardial infarction (TV-MI) and device thrombosis at long-term follow-up2,3. Of note, a number of BRS-related events in these trials were reported between one and three years –the period of active scaffold bioresorption4,5. Because of these concerns, the manufacturer withdrew the Absorb BVS from the market.

Nevertheless, other BRS with differing designs and drugs are still available on the market for use in clinical studies. One of these – a magnesium-based BRS – is currently being tested in ST-segment elevation myocardial infarction (STEMI), where their physiological advantages, such as late lumen enlargement and vasomotion, appear particularly appealing6,7. Previous studies on BRS in STEMI have shown contrasting results with either a non-inferior vascular healing response with a low rate of events or a higher rate of early device thrombosis at one-year follow-up8,9. However, all these studies are limited by short-term follow-up and lack of data beyond three years where the scaffold bioresorption may have a role in scaffold collapse with subsequent thrombosis10.

The EXAMINATION trial was an all-comer STEMI, multicentre, controlled and randomised trial, which randomised 1:1 a total of 1,498 STEMI patients to an EES (n=751) (XIENCE) or MULTI-LINK VISION® bare metal stent (BMS; n=747) (both Abbott Vascular)11,12. Those patients randomised to an EES were used for propensity score matching with an observational and retrospective cohort of consecutive STEMI patients treated with BRS in various institutions. The BVS-EXAMINATION study was performed according to the privacy policy of the various participating institutions and to their regulations for the appropriate use of data in patient-oriented research, which are based on international regulations, including the Declaration of Helsinki.

For the present analyses, individual data were pooled on a patient-level basis. Continuous variables are expressed as mean±SD and categorical variables are presented as absolute number and proportion (%). Details about propensity score matching analysis are reported in Supplementary Appendix 4.

All but one of the participating institutions agreed to perform five-year clinical follow-up and to provide follow-up data. For these reasons, out of the 290 consecutive STEMI patients treated with BRS implantation originally included in the one-year follow-up of the BVS-EXAMINATION study, 235 patients were finally included for five-year follow-up. By applying the aforementioned methodology of propensity score matching, all of the 235 BVS patients were matched with 235 EES patients from the EXAMINATION trial, as previously shown8. The distribution of patient demographics and procedural characteristics between the two matched groups was similar to the one previously reported8 (Supplementary Table 1).

Five-year follow-up was available in 100% of EES patients and in 98% of BRS patients, as four patients were lost at follow-up (Figure 1). 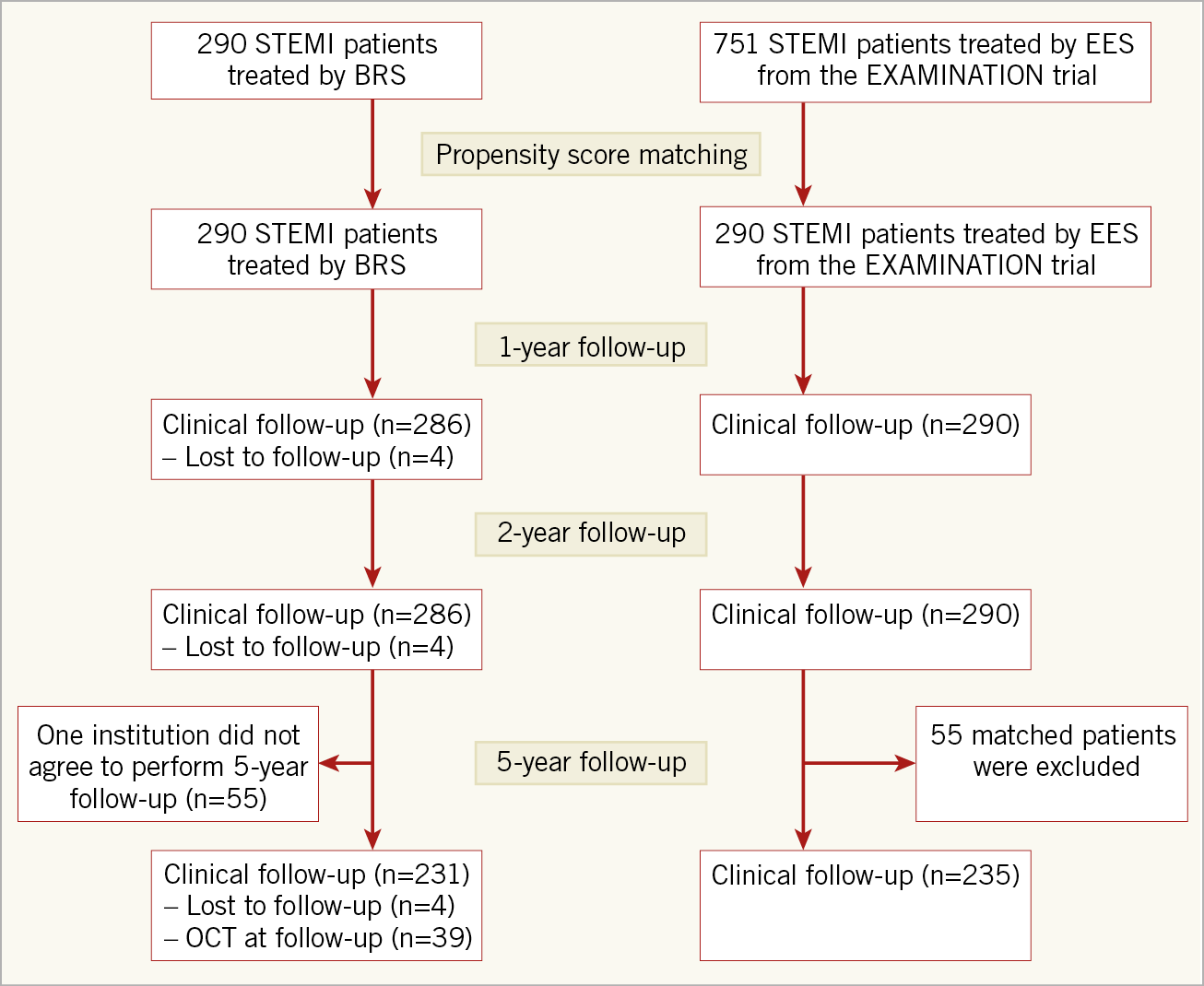 CLINICAL OUTCOMES BETWEEN BRS AND EES 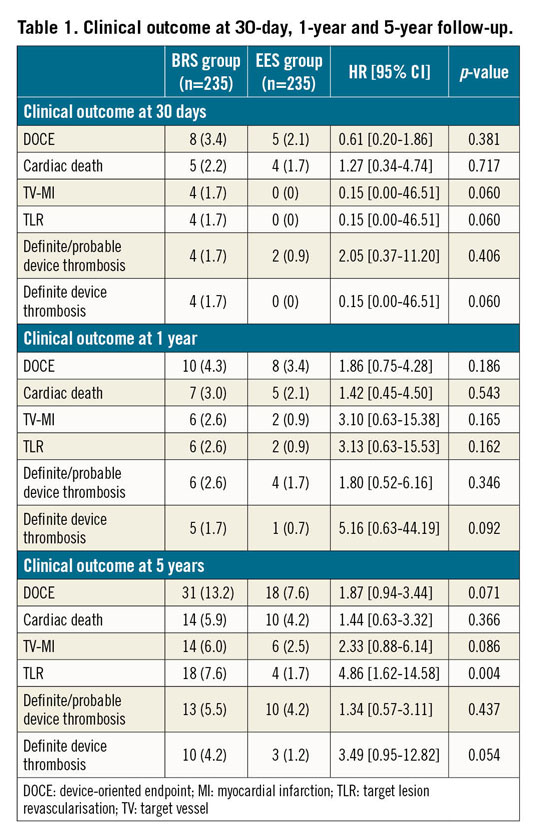 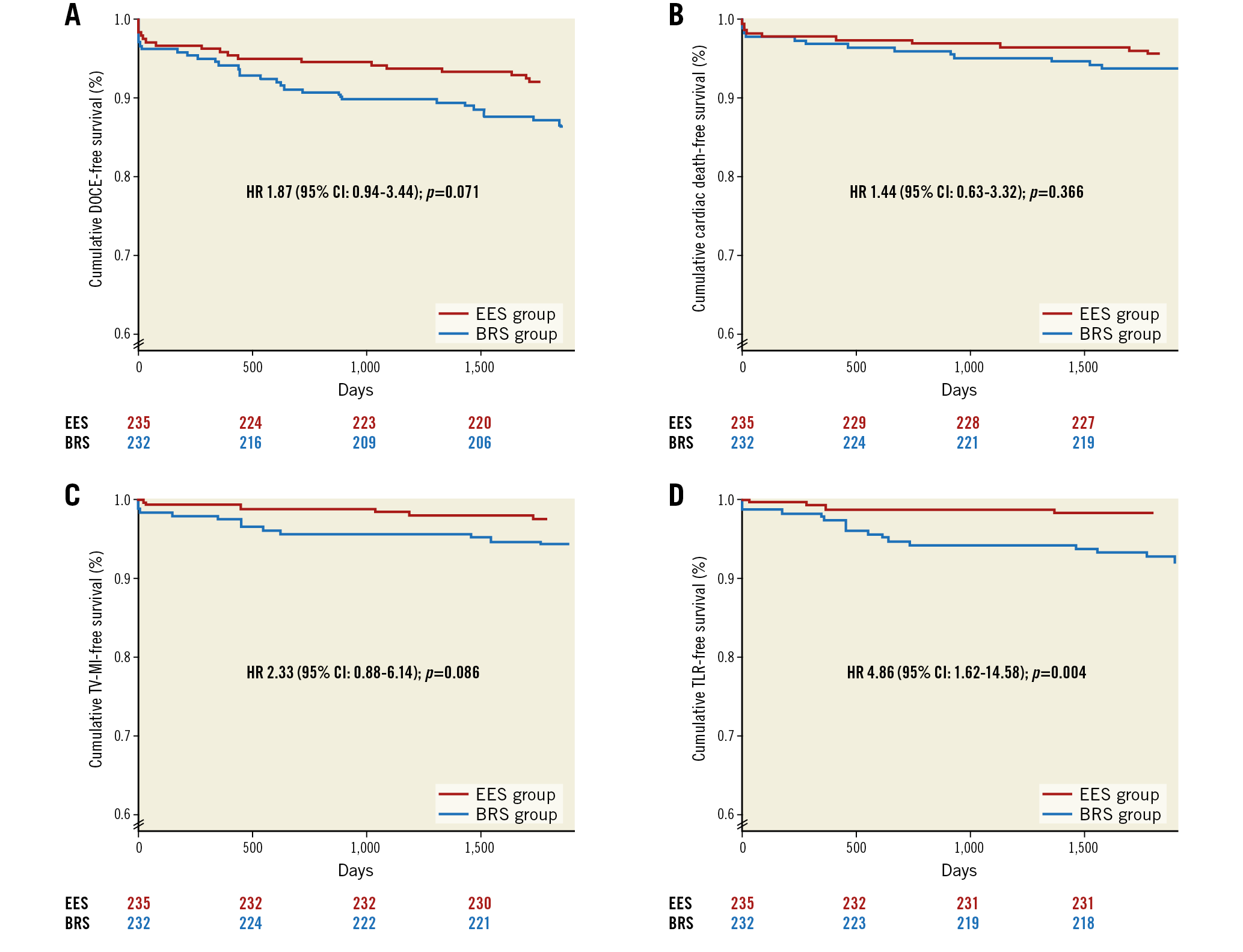 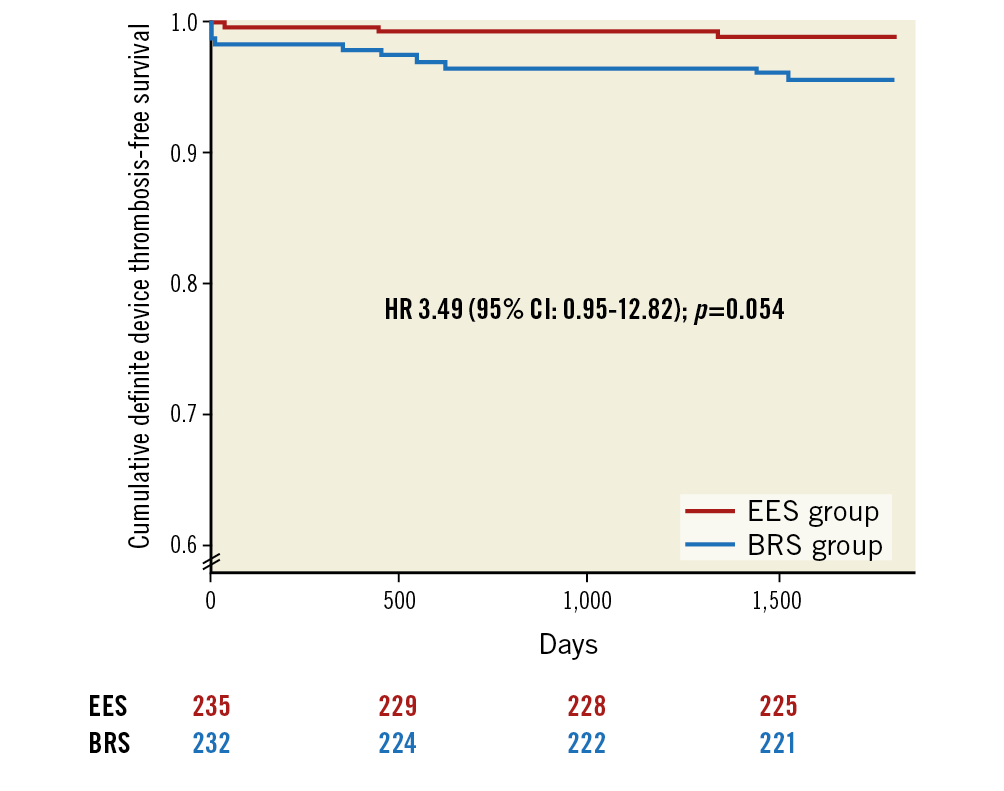 OCT data, as well as the combinations of lipid, calcification, and neovascularisation, as major atherosclerotic findings in this study, are shown in Table 2. 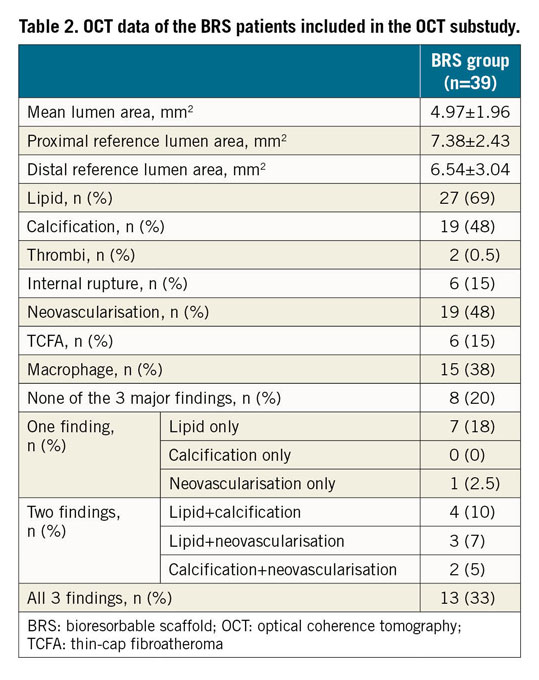 After initial enthusiasm in relation to bioresorbable scaffolds, long-term data together with BRS use in more complex lesions have shown not only a lack of superiority but even inferiority in terms of hard clinical endpoints as compared to drug-eluting metallic stents13,14. For these reasons, the Absorb BVS has been withdrawn from the market and the use of other BRS has been restricted to clinical studies15.

Against this background, the usefulness of BRS in STEMI is still controversial. From the clinical point of view, previous STEMI studies on BRS have shown comparable angiographic and OCT performance to everolimus-eluting metallic stents without a clear inferiority of BRS versus EES, with only higher device thrombosis especially in the early phase and without data beyond three-year follow-up, when scaffold bioresorption is complete8,9. The TROFI II trial, which is the only randomised STEMI trial of BRS versus EES, showed low rates of DOCE and device thrombosis at three years, in line with the favourable vascular healing process observed at six months16,17.

In this five-year follow-up of the BVS-EXAMINATION trial, we found a higher rate of DOCE in the BRS versus the EES arm, mainly driven by a higher rate of TLR. The difference in terms of TLR between the groups became more important between one and five years. The incidence of device thrombosis was also higher in the BRS versus the EES group; this difference was already evident in the early phase and continued to increase up to five years. No differences were found between the groups in terms of dual antiplatelet therapy at five years, with a very low rate in both groups.

It is noteworthy that device-related clinical events continue to accrue yearly and that, whereas almost 90% of the five-year EES TLR were due to device thrombosis, only 55% of the BRS TLR were caused by device thrombosis. This means that different mechanisms may play a role in determining these events between metallic and bioresorbable devices. Mechanical causes, such as scaffold dismantling, and also neoatherosclerosis should be considered. Whereas scaffold dismantling is known to be important for device thrombosis, neoatherosclerosis may play a role either in thrombosis or in restenosis10,19 (Figure 5). In the case of metallic stents, neoatherosclerosis was known to contribute to the so-called late catch-up phenomenon. Although BRS were created to reduce this phenomenon, neoatherosclerosis following BRS implantation is not only qualitatively similar to that of DES, mainly composed of lipid, calcification and neovascularisation, but also seems to have a higher incidence19,20. Whereas in the RE-EXAMINATION study the incidence of neoatherosclerosis in STEMI patients who received EES was 22.6% at five years, in the present study we found, for example, a higher incidence (79%) in STEMI patients treated with BRS21. This high incidence confirms a previous observation in a group of stable angina patients enrolled in the ABSORB EXTEND study with OCT analysis at five years19. Data from other BRS platforms would be interesting in order to understand whether this phenomenon is related only to a specific BRS or if it is a class effect. 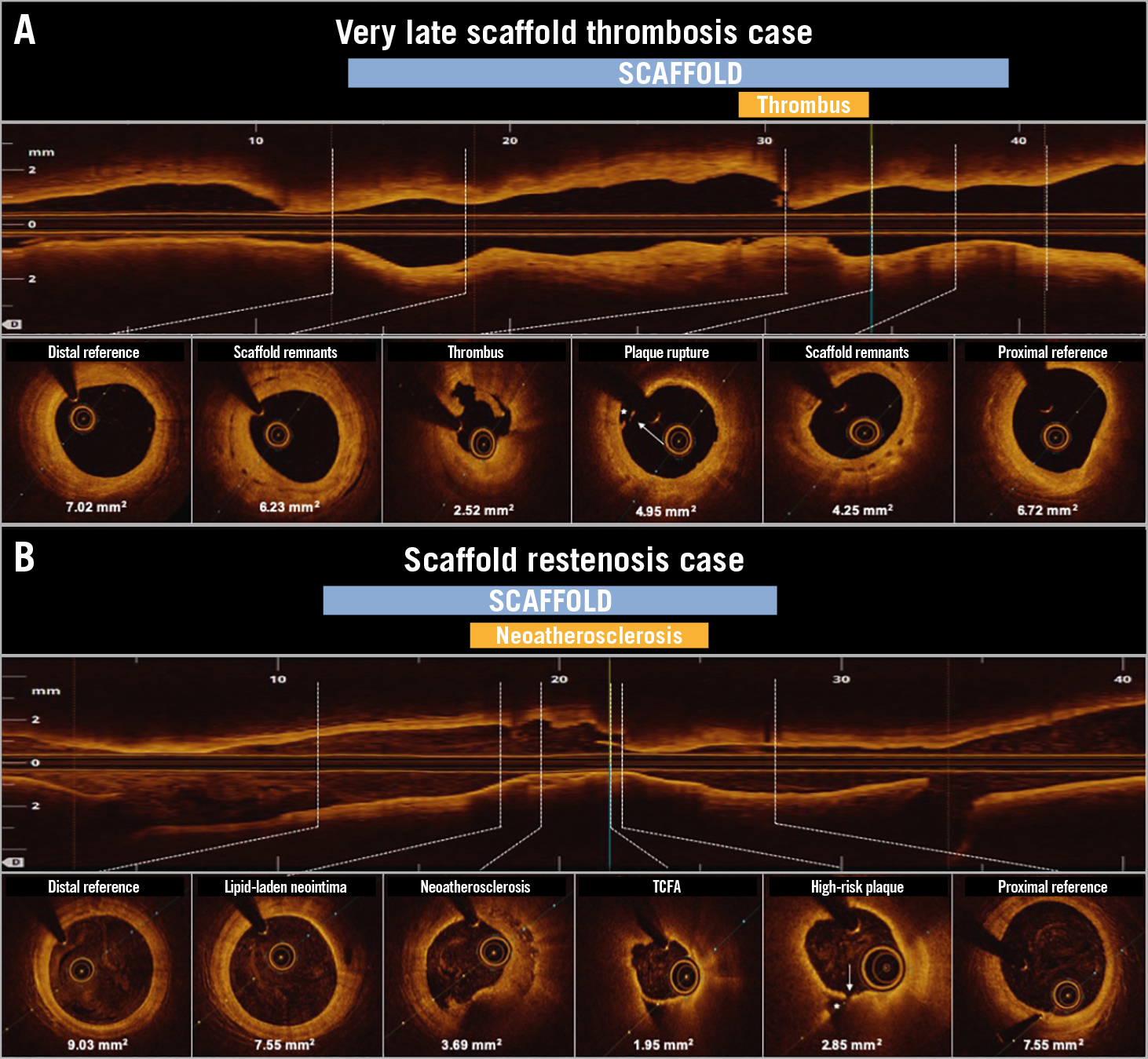 Figure 5. Examples of events caused by neoatherosclerosis following BRS implantation in STEMI. A) A case of BRS VLST at 1,550 days (4.25 years) after the index procedure. The main OCT finding related to the thrombosis was neoatherosclerosis with plaque rupture (white arrow and asterisk), visible also in the OCT longitudinal view. Near to the proximal and distal references, scaffold remnants were still observed. B) A case of scaffold restenosis due to neoatherosclerosis. A TCFA with cap rupture (white arrow and asterisk) was identified without thrombus. An FFR of 0.74 was measured. For both panels, in the longitudinal view the dotted lines correspond to the cross-section images. Minimum lumen area is shown per each cross-section. BRS: bioresorbable scaffold; FFR: fractional flow reserve; OCT: optical coherence tomography; TCFA: thin-cap fibroatheroma; VLST: very late scaffold thrombosis

Last but not least, a previous study suggested that, despite the increased risk of early events, BRS may still provide a theoretical net clinical benefit to patients in the very long term, but only if the risk of BRS failure beyond three years is substantially reduced as compared with EES22. However, our study shows that this event risk of BRS versus EES is maintained beyond four years, despite being performed in STEMI, a setting which is theoretically favourable to BRS17. Given this small degree of benefit that clinicians and decision makers may expect from the first-generation BRS at the current risk not only of device thrombosis but overall of target lesion failure, we guess that very long-term follow-up of the first-generation BRS has a very low probability of giving positive results. Whether different results will be obtained with new-generation BRS remains to be determined.

Several limitations of the study should be acknowledged. Due to the limited number of patients and events, and because the study was not randomised but based on a propensity score analysis, caution should be exercised in reaching firm conclusions. Dual antiplatelet therapy in STEMI patients with Absorb BVS implantation did not include guideline-oriented prasugrel or ticagrelor, and the duration was not according to the recommendations of the EAPCI Task Force. Of note, post-dilatation was performed in a relatively low number of patients. The nature of the clinical follow-up (clinical visit or phone call) differed in both clinical arms. Nevertheless, this study currently represents the largest cohort of STEMI patients treated with BRS compared with a control arm.

At five-year follow-up, STEMI patients treated with BRS showed a higher rate of DOCE compared with STEMI patients treated with EES, mainly driven by a higher rate of TLR, especially concentrated between one and five years. The incidence of BRS thrombosis was also higher as compared to EES. In event-free BRS patients, a high incidence of neoatherosclerosis, composed of lipid, including thin-cap fibroatheroma (TCFA), calcification and neovascularisation, was found at five years. Our five-year event risk of BRS versus EES suggests that the probability of obtaining positive results at very long-term follow-up is low. Whether better results will be obtained with new-generation BRS remains to be determined.