Switzerland: coronary and structural heart interventions from 2010 to 2015

In 2015, Switzerland had a population of 8.3 million inhabitants. Since the first coronary angioplasty performed by Andreas Grüntzig in Zurich in 1977, the number of percutaneous procedures has steadily increased. The aim of this report is to summarise the current state of catheter-based cardiac interventions in adults in the country and to detail trends between 2010 and 2015. Since 1987, the Working Group for Interventional Cardiology of the Swiss Society of Cardiology has collected annually aggregate data from all facilities with cardiac catheterisation laboratories in the country. In 2015, a total of 37 institutions covered 17 of the 26 Swiss cantons. Over the six-year period, there was a continuous increase in the number of coronary angiography and percutaneous coronary interventions (PCI) (median increase rate of 3.2%/year for coronary angiography and of 2.6%/year for PCI). Notable was the adoption of the transradial approach for PCI, going from a median rate of 17% in 2012 to 51.9% in 2015. With respect to structural heart interventions, the number of patent foramen ovale as well as atrial septal defect closures has remained stable, while the number of transcatheter aortic valve implantations and transcatheter mitral valve repairs has shown a fourfold increase.

According to the Swiss Federal Statistical Office, in 2015 Switzerland had 8,325,194 permanent residents (http://www.bfs.admin.ch). In 2014, cardiovascular disease was the main cause of death after eighty years of age and the second one (following cancer) between 37 and 79 years of age. Overall, cardiovascular disease accounted for 24.3% (124/100,000) and 26.7% (77/100,000) of all deaths in men and women, respectively. Swiss residents have an unrestricted access to emergency care and high-quality elective medicine. Health costs are covered by the personal compulsory insurance or by employer’s insurance in case of accident. Individuals who cannot afford to pay health insurance fees are subsidised by the government. Reimbursement of hospitalised patients is based on a “diagnosis-related group” classification while outpatient interventions have a dedicated reimbursement system.

Andreas Grüntzig performed the first percutaneous coronary intervention (PCI) in 1977 in Zurich1. In 2015, the country had 37 PCI centres covering 17 of the 26 Swiss cantons: five university hospitals, 16 non-university public hospitals and 16 private institutions. All the centres performed both diagnostic and therapeutic procedures and 17 (46%) had on-site cardiac surgery. Ten centres had an interventional cardiology training programme, based on the two-year model proposed by the European Association of Percutaneous Cardiovascular Interventions (https://www.escardio.org/static_file/Escardio/Subspeciality/EAPCI/Accredit_wg10_DiMario.pdf), and the accreditation of the Swiss Certificate in Interventional Cardiology by the SIWF (Schweizerische Institut für ärztliche Weiter- und Fortbildung) has been pending since 2016. The Working Group for Interventional Cardiology (www.ptca.ch) of the Swiss Society of Cardiology performs a nationwide annual survey on percutaneous cardiac procedures in adults based on aggregate data provided by each institution. Since 1987, based on a standardised questionnaire that has evolved over the years, all cardiology centres are asked to report yearly aggregate data on the number and type of procedures performed2. Since 2008, data have been publicly available at the website of the Swiss Working Group for Interventional Cardiology of the Swiss Society of Cardiology (www.ptca.ch). In the latest version of the questionnaire, 62 items covered, among other, information on the infrastructures, numbers of operators, availability of on-site cardiac surgery, number of angiographies (CA) and PCI, stratified for ST-segment elevation myocardial infarction (STEMI), non-ST-segment elevation acute coronary syndromes (NSTE-ACS), cardiogenic shock or cardiac arrest and stable coronary disease (CAD). In addition, information was available on single-vessel vs. multivessel PCI, access site, specific revascularisation techniques (e.g., rotational atherectomy, recanalisation of chronic totally occluded vessels), adjunctive techniques (e.g., use of intravascular imaging, distal protection devices), and use of mechanical circulatory support. From 2014, in-hospital mortality data for PCI were gathered and stratified according to the clinical presentation (STEMI, NSTE-ACS, stable CAD and cardiac arrest/cardiogenic shock).

With respect to structural heart interventions, information was available on balloon valvuloplasties, transcatheter aortic valve implantation (TAVI), percutaneous mitral valve repair (PMVR), closure of shunts as well as of paravalvular leaks and left atrial appendage occlusion (LAAO). Limitations of this report include the fact that the survey was based on aggregate data delivered by the centres on a voluntary basis and not subjected to audit. At times, centres did not deliver complete data on all of the items requested. 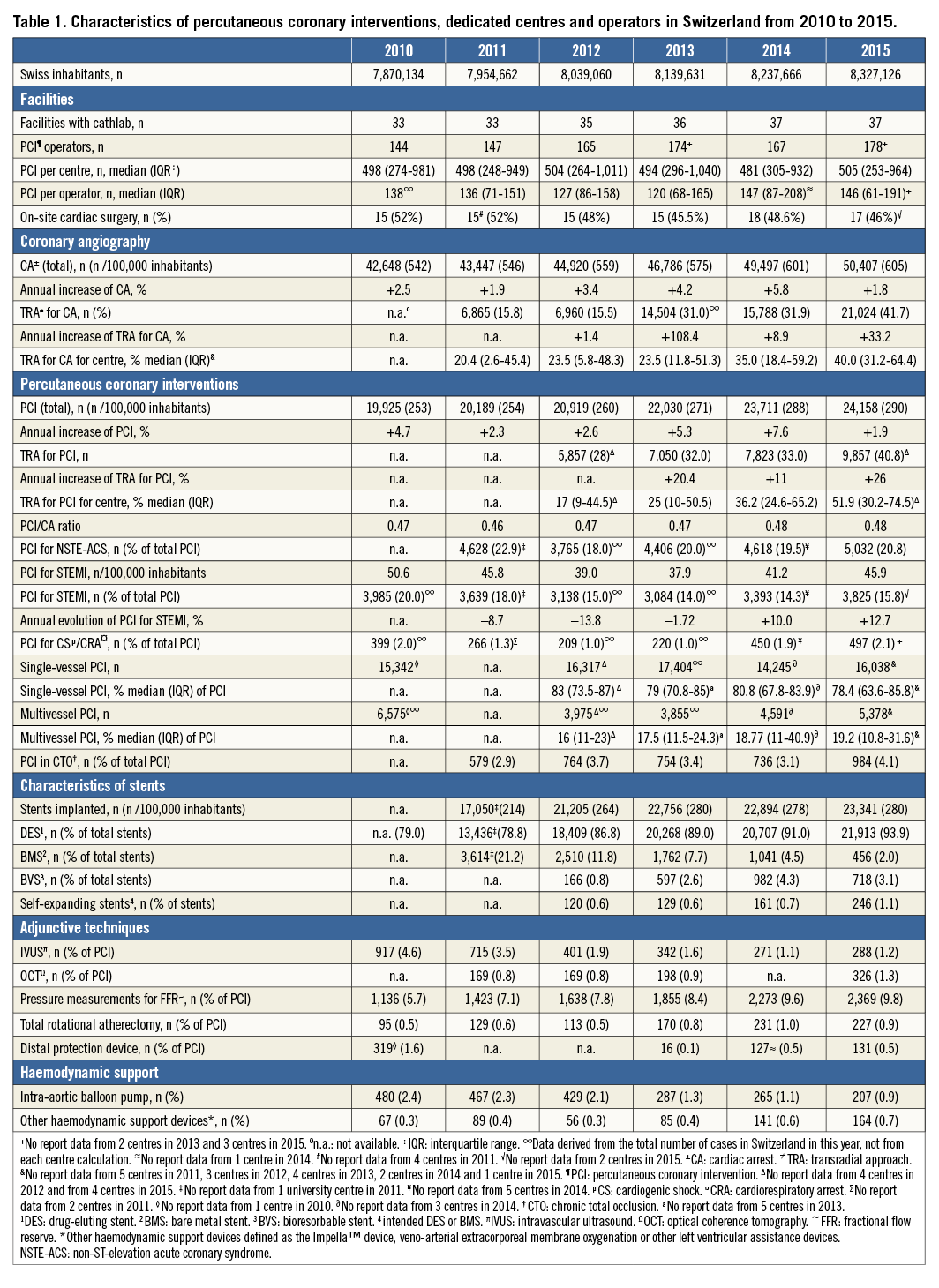 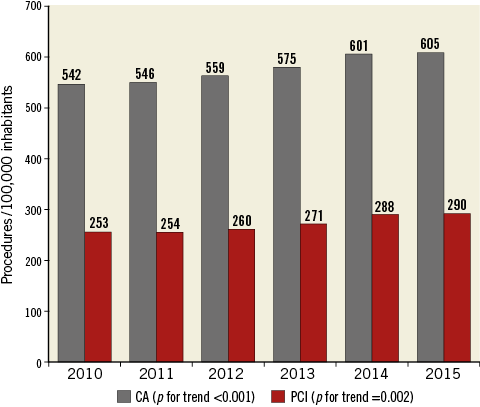 Concerning the adjunctive techniques and niche coronary interventions, over the studied period there was an increased use of intracoronary optical coherence tomography (OCT) (from 0.8% of all PCI in 2011 to 1.3% in 2015) and haemodynamic stenosis evaluation with fractional flow reserve (FFR) (from 5.7% in 2010 to 9.8% in 2015), while the number of intravascular ultrasound investigations decreased from 4.6% to 1.2% of all PCI. An increase in chronic total occlusion (CTO) recanalisation procedures was observed (from 2.9% of all PCI in 2011 to 4.1% in 2015), while rotational artherectomy remained a niche procedure (0.5% in 2010 and 0.9% in 2015). In summary, in the coronary field we observed a constant increase in CA and PCI procedures with a stable proportion between the two (roughly 2:1); a marked increase in TRA for CA as well as PCI, and the almost exclusive use of DES. Bioresorbable scaffolds, self-expanding stents, rotational atherectomy and OCT remained niche devices. Haemodynamic stenosis evaluation with FFR was limited to less than 10% of all PCI. CTO recanalisation procedure had a major proportional increase but remained confined to less than 5% of all PCI. Mortality data for PCI were available for 2014 and 2015 and the overall event rate was roughly 1%, ranging from <0.2% for stable CAD to approximately 30% for cardiogenic shock or cardiac arrest. 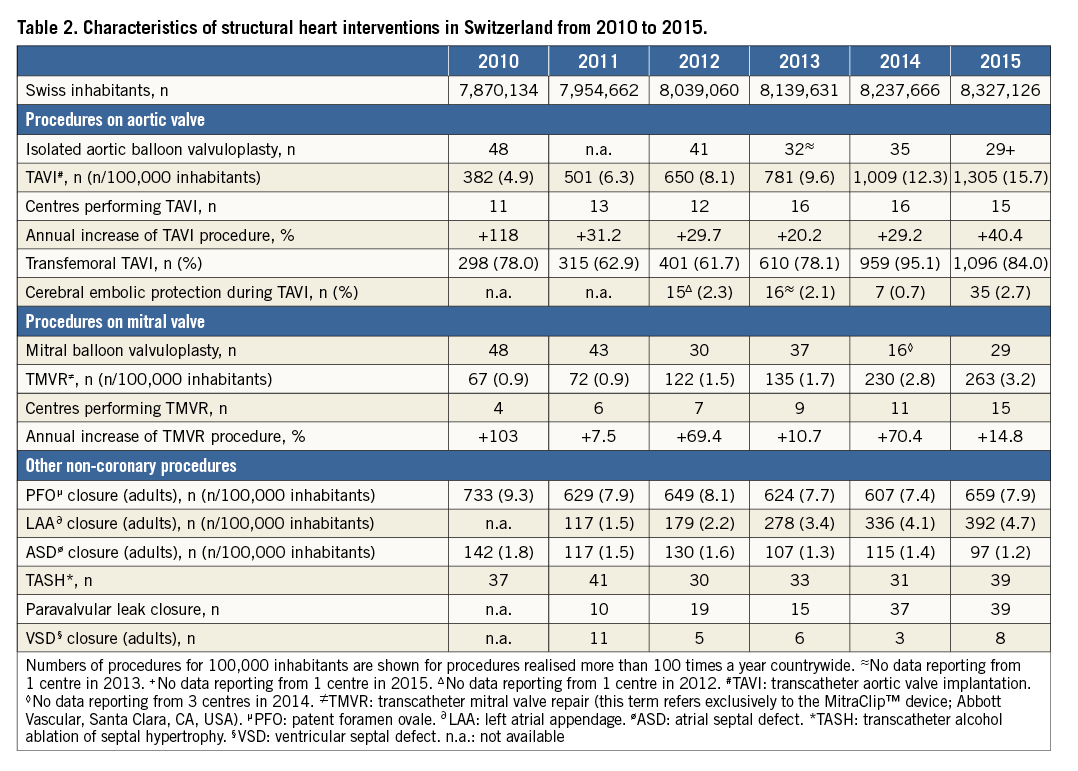 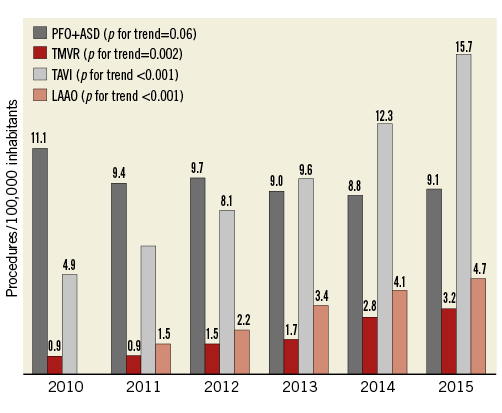 We noted an increase in LAAO, with a threefold increase in five years (from 117 in 2011 to 392 in 2015) and a fourfold increase of paravalvular leak closure (from 10 in 2011 to 39 in 2015), although both remained niche procedures in terms of total numbers. The number of PFO and atrial ASD closures remained roughly stable over the years, with 733 PFO closures in 2010 and 659 in 2015; the corresponding numbers for ASD closures were 142 and 97. Percutaneous septal ablation was performed in less than 40 cases a year. In summary, in the structural heart intervention arena, we observed a fourfold increase in TAVI as well as PMVR procedures. More details can be found in the two running national registries (Swiss TAVI and MitraSwiss)4,5. Despite the remarkable proportional increase in LAAO procedures, the overall number remains limited.

We are indebted to all representatives of the catheterisation laboratories participating in this survey. Furthermore we acknowledge the effort of all the centres which collected the survey data and completed the questionnaires.

Turkey: coronary and structural heart interventions from 2010 to 2015