Methods and results: This is an observational study. A total of 30 elective patients (15 treated with EES and 15 with BMS) were recruited. All patients underwent coronary angiography and intracoronary acetylcholine (Ach) test at different doses at six months after stent implantation. Quantitative coronary angiography analysis was performed to evaluate the changes in mean luminal diameter (MLD) of the segments distal to the distal stent edge after increasing doses of Ach. Both EES and BMS groups had similar baseline characteristics except for stent length (18.6±2.5 vs. 16.5±2.5 mm; p=0.033) and diameter (3.1±0.2 vs. 3.4±0.3 mm; p=0.007). The vasomotion test showed that EES had 3.14% of MLD decrease after Ach infusion and BMS had 2.35% of vasoconstriction (p=0.62). After adjustment for baseline characteristics, no statistical difference was observed between groups.

Conclusions: In our study EES implantation was associated with a low degree of ED and had a similar vasomotion response as compared to BMS. Prospective randomised investigations are warranted to confirm these findings.

From January 2012 to February 2013 all consecutive patients with successful implantation of an EES (XIENCE V; Abbott Vascular, Santa Clara, CA, USA) or a BMS with the same platform as the EES (MULTI-LINK VISION; Abbott Vascular) in the proximal or mid coronary segments were screened to participate in the study. The decision to treat with EES or BMS was left to the operator’s discretion. Among the 52 patients screened, 30 patients fulfilled the inclusion criteria and accepted to participate (15 in the EES group and 15 in the BMS group). All patients were visited at the outpatient clinic and asked to undergo an angiographic follow-up with an acetylcholine (Ach) vasomotion test according to the protocol.

Patients were eligible when >18 years and if they had undergone baseline coronary angiography due to silent angina, stable angina or unstable angina. The exclusion criteria were age ≥75 years, severe hypertension, stent restenosis, previous myocardial infarction related to the treated vessel, insulin-dependent diabetes mellitus, history of coronary spasm, ejection fraction ≤30%, previous bypass graft surgery, reference vessel diameter <2.75 mm and >4.0 mm, and stents >23 mm in length. All patients provided written informed consent and the protocol was approved by the ethics committee of our institution.

Coronary angiography was performed six months after stent implantation. All vasomotor drugs, such as beta-blockers, calcium-channel blockers, nitrates, angiotensin-converting enzyme inhibitors and angiotensin-II receptor blockers were discontinued 48 hours before the procedure. Endothelial vasomotion was estimated by measuring the coronary artery reactivity in response to a local Ach infusion. Since Ach causes endothelium-dependent vessel relaxation in standard conditions, a paradoxical vasoconstriction after the infusion of this substance is an indicator of ED11 (Figure 1). 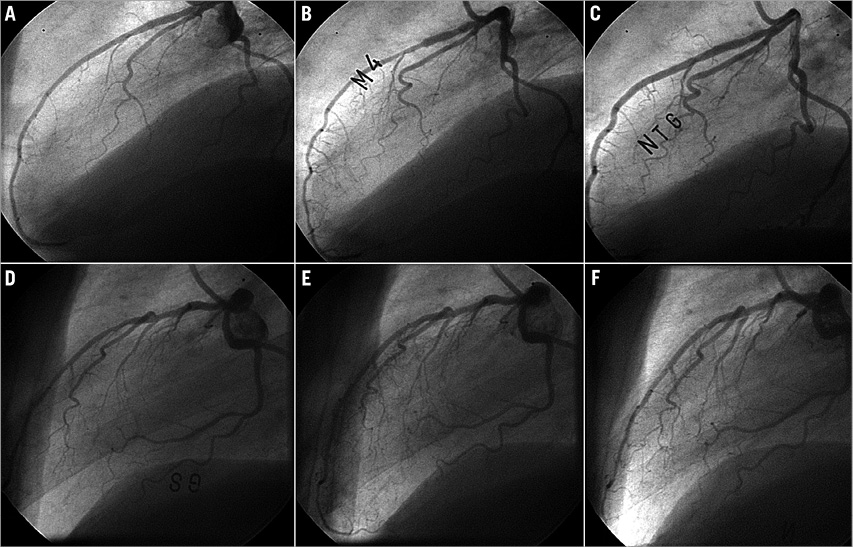 A 1.8 Fr microcatheter (FineCross™; Terumo Corporation, Tokyo, Japan) was advanced over a guidewire (0.014 inch) and placed in the mid portion of the stent. To determine baseline vasomotor response, physiologic saline was infused for 2 min through the microcatheter, and an angiogram was recorded. To assess endothelium-dependent coronary vasomotor response, the saline infusion was replaced by intracoronary infusion of incremental doses of Ach, with estimated intracoronary final concentrations of 10–8 mol/L to 10–6 mol/L. The duration of each infusion was 2.5 min. All infusions were delivered at a rate of 2 ml/min using a precision pump injector (Harvard Apparatus, Holliston, MA, USA). The final blood concentrations of Ach were estimated with the assumption that blood flow in the coronary artery was 80 ml/min12. Finally, to evaluate endothelium-independent vasomotor response, a nitroglycerine bolus (200 µg) was administered through the guiding catheter. Throughout the procedures, heart rate, systemic arterial pressure and ECG were continuously monitored.

At the end of each dose of Ach and after nitroglycerine bolus administration, an angiography was performed.

Quantitative coronary angiography (QCA) was performed from two orthogonal views that best showed the artery of interest, without overlapping side branches and with less foreshortening using the coronary angiography analysis software (CAAS) version 5.9 (Pie Medical Imaging, Maastricht, The Netherlands). Calibration of the system was based on dimensions of the guiding catheter. Measurements were performed by two blinded observers with an excellent agreement between both (consistency ICC 0.926, 95% CI: 0.901-0.957). Mean luminal diameter (MLD) of the segments distal to the stent was averaged for the two projections. The same segments were identified by anatomical landmarks and assessed after saline infusion, after each dose of Ach and after nitroglycerine (NTG) bolus. Changes in coronary diameter in response to Ach and nitrate coronary infusion were expressed as percent changes of MLD versus baseline angiograms.

ED was defined as a vasoconstriction of the distal segment of the stent at maximal dose of Ach beyond the variability of the method of analysis (4%), as previously described13.

Table 1 summarises the baseline clinical characteristics of the patients. No significant differences were found between groups. At six-month follow-up, there were no differences of medication among the groups except for clopidogrel, which was more frequently discontinued in the BMS group. Table 2 summarises the procedural characteristics. The EES group was treated with longer length and smaller diameter stents than the BMS group. The EES were more frequently post-dilated and used for the treatment of bifurcation lesions compared to BMS. 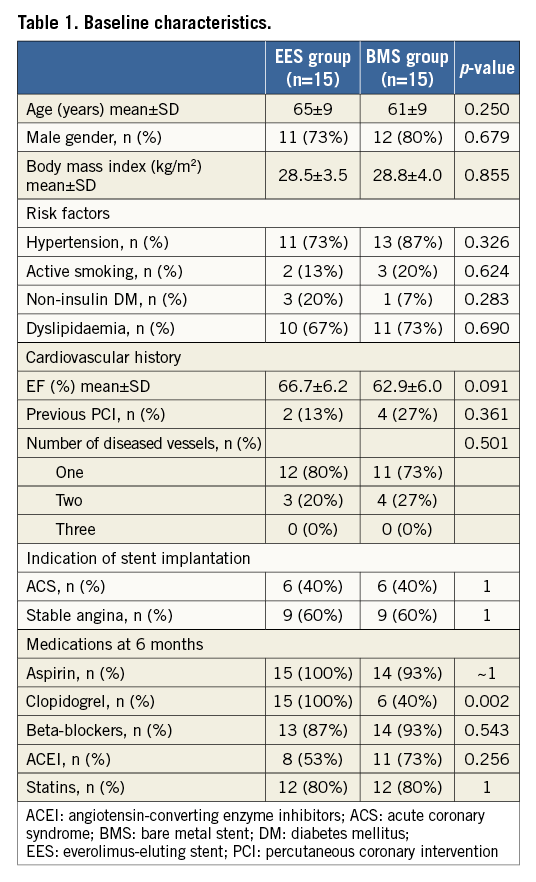 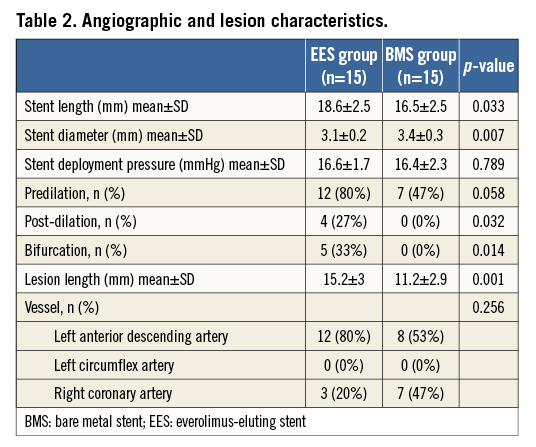 No changes were observed in mean aortic pressure and heart rate during the Ach infusion. QCA measurements showed a lower late lumen loss in the EES group compared to the BMS group (0.21±0.20 mm vs. 0.66±0.30 mm, p=0.001). No differences in baseline MLD of the distal segment of stents were seen. Although there were no significant differences between groups in any Ach dose, at the highest dose the EES group presented a non-significant trend towards greater vasoconstriction than the BMS group (–3.14±14.40 vs. –2.35±17.10, p=0.620). Results of the vasomotion test are summarised in Table 3. ED was observed in six (40%) patients of the EES group and five (33%) patients in the BMS group (p=0.705) (Figure 2). The magnitude of the estimated differences in vasomotor changes was mildly strengthened after adjustment for stent length, stent diameter and late lumen loss (Figure 3); however, the differences between EES and BMS remained non-statistically significant. There was no difference in the response to NTG infusion between groups. 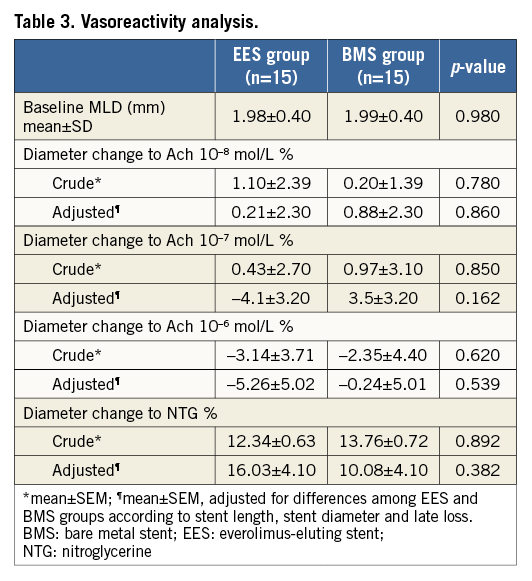 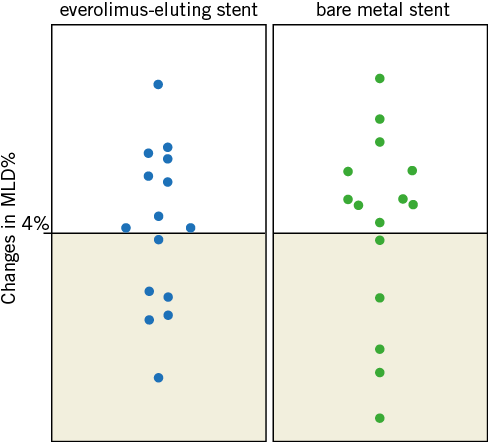 Comparing our study with other similar experiences, it is important to remark that the trial of Kim et al9, analysing ED of SES, ZES and BMS, used a higher dose of Ach. This fact may partially explain the important differences in vasoconstriction between this study and ours. Nevertheless, the Ach doses used in the present experience have been used in previous published studies13-15 and the capacity of these doses to generate a paradoxical response to Ach infusion has been documented. Therefore, although ED could be less magnified in the present experience, the dose of Ach seems to be enough to bring out significant endothelial function impairments.

On the other hand, the investigations of Fuke et al6 and Mitsukake et al16 evidenced a severe degree of ED six months after SES implantation, with the same estimated concentration of Ach in the coronary artery as used in the present study.

Further studies analysed ED after SES and BES implantation10,17 with other vasomotor reactivity tests, such as rapid auricular pacing or exercise. These trials also evidenced a severe degree of ED in first-generation DES compared to BMS or newer ones; however, the comparison of these experiences with ours is at least questionable.

ED was first reported after BMS implantation18 and initially associated with mechanical injury of the vessel; however, multiple trials demonstrated a severe ED after first-generation sirolimus-eluting stent (SES) implantation4,5. More recently published studies showed that second-generation ZES and BES displayed ED to a much lesser degree9,10.

As a significantly greater degree of ED was described after DES implantation, the idea that other causes, such as direct drug action or effects of the polymer, may play an important role was introduced19.

The pathophysiology of the ED is still under discussion, but all studies to date point towards less ED and faster endothelial structural recovery with the newer DES, because of the lipophilicity of newer drugs with a more localised effect and a better biocompatibility of the polymers19. Although the reasons for this observation have not been fully elucidated, ED seems to be related to in-stent reendothelialisation9, as some optical coherence tomography studies have pointed out, showing that increased strut coverage was associated with a lesser degree of ED20.

In fact, EES have demonstrated no differences in tissue coverage compared to ZES in in vivo studies, but a better endothelialisation than ZES and SES in animal-based studies21. These data support the results of our study, where EES showed the lowest degree of ED ever published.

A novel concept, recently described, with important implications that could be strongly related to ED and its clinical impact is neoatherosclerosis. Neoatherosclerosis is the development of atherosclerotic changes within the neointima1 and has been identified as one of the possible causes of very late stent thrombosis. In epidemiologic studies its incidence was significantly greater in DES as compared to BMS22. Although processes responsible for the development of neoatherosclerosis after stent implantation are multifactorial, it is largely accepted that an impaired endothelial function promotes this pathogenic process23. In this setting, it seems that newer stents such as EES, with a demonstrated better preservation of endothelial function, may cause neoatherosclerosis to a lesser degree, permitting a significant reduction of very late stent thrombosis rates.

Finally, it is important to point out that some evidence exists that clopidogrel may improve endothelial function24. In our study, all patients in the EES group were treated with clopidogrel when the Ach test was performed, while only 40% of BMS group patients were under clopidogrel treatment. This difference between groups could have had some impact on the results, underestimating endothelial dysfunction in the EES group. However, it should be noted that, in the BMS group, we did not find any differences in the Ach test results between patients with and without clopidogrel. This fact suggests that the action of clopidogrel over ED does not seem to be great enough to alter the present results significantly.

First, the present study has obvious limitations due to its non-randomised design and the small sample size, thus limiting the statistical power of the study results. Patients were treated with either EES or BMS according to the operator’s discretion. Therefore, all comparisons between both devices have to be read with caution and are only hypothesis-generating. Second, endothelial function was exclusively analysed in distal segments; however, it is well known that ED is more frequently observed distally to the stent segment. In our series, all patients had most of the lesions located in the proximal segments of the epicardial coronary vessels. Third, diabetes mellitus has been associated with a higher rate of ED. In our series, a total of four were diabetics. However, there were no significant differences between both groups, and insulin-dependent patients were excluded per protocol, as these patients are those who can display ED to a more significant degree25. Fourth, measurements of the study were not performed in an independent core lab. However, analyses were performed by two blinded, independent observers with an excellent interobserver correlation, minimising possible bias due to this cause. Finally, it is important to point out that the relative magnitude of the influence of stent length, stent diameter and late loss is uncertain and could be non-linear due to the small sample size of the study.

This study provides evidence that EES implantation is associated with a low degree of ED and has similar vasomotion response to BMS. Prospective randomised investigations are warranted to confirm these findings.

An unusual complication of hip surgery: paradoxical coronary embolism of foreign material as a cause of acute MI