Portugal: coronary and structural heart interventions from 2010 to 2015

The aim of the present paper is to report trends in Portuguese interventional cardiology from 2010 to 2015. We studied data from the prospective multicentre Portuguese National Registry of Interventional Cardiology (RNCI) to analyse percutaneous coronary intervention (PCI) procedures and structural heart interventions from 2010 to 2015. A total of 73,977 PCIs and 780 transcatheter aortic valve implants were performed during the study period. Since 2010 there has been a 60% increase in PCI procedures and a twofold increase in primary angioplasty rates reaching 316 per million population. Significant PCI trends were observed, notably the increase of radial access, a reduction in restenosis indications, as well as an increase in stent use, including DES, in imaging and in functional techniques. Importantly, there was a fourfold increase in the TAVI rates reaching 29 per million population.

The aim of the present paper is to report trends in the percutaneous treatment of heart disease in Portugal, based on the description of the demographics and health system organisation and on the data analysis from the Portuguese National Registry of Interventional Cardiology (RNCI) of the Associação Portuguesa de Intervenção Cardiovascular (APIC, www.apic.pt).

We performed a transversal analysis regarding the 2015 cathlab status and studied the prospective multicentre data from the RNCI to analyse percutaneous coronary intervention (PCI) procedures and structural heart interventions from 2010 to 2015.

The Portuguese population is 10.3 million and there is a total of 27 catheterisation laboratories, seven of them private. A total of 19 public hospitals operate 24h/7d and run the primary PCI (pPCI) programme (Via Verde Coronária). A total of seven public centres have permanent on-site surgical departments of which five run valvular heart team programmes.

Since 2008, interventional cardiology has become a subspecialty whose certification is issued by the Ordem dos Médicos (Portuguese Medical Association) based upon the curriculum vitae and two years of training, ensuring a minimum number of procedures (250 therapeutic catheterisations, half of them as first operator).

Access to the public health system in Portugal is universal. Although the system itself is tax-funded, users may be required to pay an admission fee to emergency departments, to consultation clinics, for hospital admission or for specific examinations.

The majority of hospitals with fully operational catheterisation laboratories are part of the public health system and are thus financed by the yearly state budget for healthcare. The Portuguese public healthcare system is not reimbursement policy-based. Each year hospitals individually prepare a budget concerning the estimated expenditure for inpatient and outpatient diagnostic and treatment techniques. In matters of interventional cardiology, estimate numbers of diagnostic and percutaneous coronary intervention procedures, of special techniques –pressure wires and intracoronary imaging, atherectomy and ventricular assist devices– and a specific estimate of the number of structural intervention techniques must be determined. The yearly budget report is submitted to the office of the Ministry of Health for evaluation, including an analysis of any deviation from the budget of previous years. Hospital funding per procedure is also influenced by whether the patient was referred by another hospital or if the patient was admitted for a duration over twenty-four hours; if this is the case, the hospital will receive a different preset hospital admission fee. Final yearly funding to each hospital is established based on the individual analysis and discussion with the submitting hospitals. The growth of transcatheter aortic valve implantations (TAVI) has been subject to a specific analysis, and a national plan for specific funding of structural heart disease is underway.

The increasing number of private hospitals in Portugal has carried out growing numbers of interventional cardiology procedures in the private sector. The private sector receives payment from individual private insurances, and is not subject to state funding except under specific circumstances. As is typical of private insurance systems, the contracted individual policy may limit the type or extent of treatment. Reimbursement is made according to preset values for each procedure, special techniques utilised and the extent of hospital admission. Insurance coverage for interventional cardiology procedures is a growing field.

The RNCI was established in 2002 and is centralised in the National Centre for Data Collection in Cardiology (CNCDC, http://www.spc.pt/CNCDC/), under the aegis of the Portuguese Society of Cardiology (Sociedade Portuguesa de Cardiologia, www.spc.pt)1. The aim of this multicentre, voluntary, prospective patient registry is to provide a continuous record of percutaneous procedures and patient characteristics in Portugal, based on the Cardiology Audit and Registration Data Standards (CARDS). Data are continuously introduced and are available online at: http://www.spc.pt/RegistosNacionaisSPC2-4.

Changes in PCI characteristics of the population treated by PCI in Portugal between 2010 and 2015 are shown in Table 1. The number of PCI has increased 56% since 2010, paralleled by the number of procedures per operator. In absolute terms, pPCI rates almost doubled in this period, with a steady rise to 316 pPCIs per million (Figure 1). 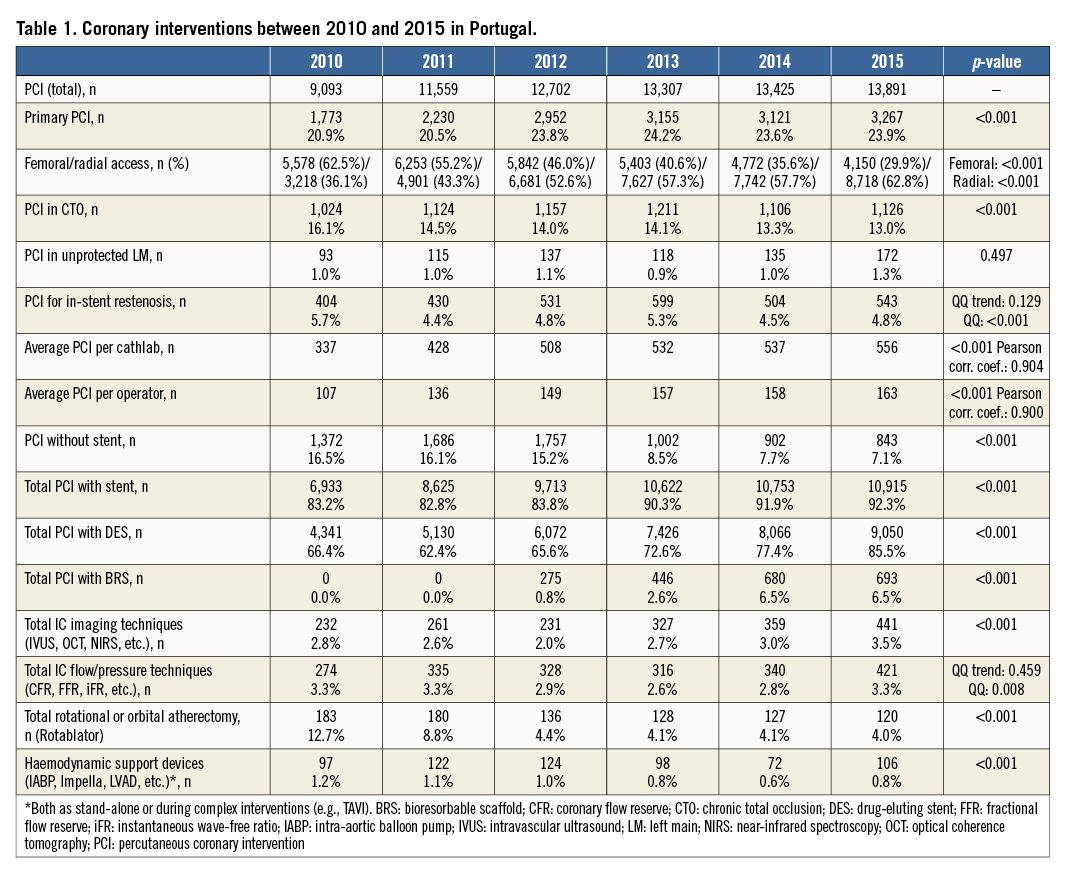 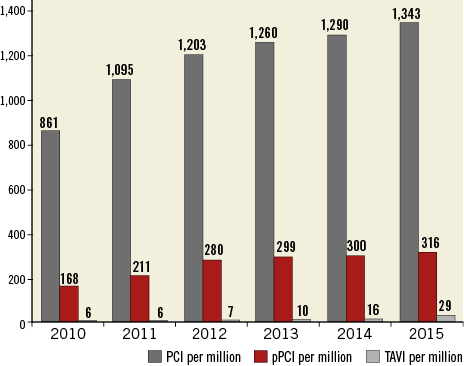 The predominant arterial access has inverted from femoral to radial, reaching 62.8%. In-stent restenosis (ISR) and chronic total occlusion (CTO) indications have decreased progressively. Several variables also increased their frequency, namely stent and DES use, respectively 92.9% and 85.5%. The rate of DES use was 66.4% initially and, since 2012, bioresorbable stents have reached 6.5%. Atherectomy peaked in 2010 (12.7%), followed by a steep fall (to 4.0% in 2015). Imaging and functional techniques have regained ground, reaching 3.5% and 3.3%, respectively, in 2015.

Structural heart disease interventions are depicted in Table 2. TAVI procedures remained steady at around 7 per million population until 2012 and increased thereafter, reaching 29 per million in three years. MitraClip® (Abbott Vascular, Santa Clara, CA, USA) procedures started in 2013 and are evolving quickly. The left atrial appendage closure registry is next in line but as yet there are no reliable registries for adult congenital procedures.

The Portuguese PCI network is wide and covers most of our territory, in particular for pPCI5. Operator productivity increased during the reported time period, leading to a higher number of PCIs, creating the hypothesis of lesser complexity as the ISR and CTO percentages diminished. Of particular note is the growing proportion of use of the radial approach and the decreasing rate of atherectomy procedures, which implies a change in terms of training and organisation. These indicators show the advantage of registries based upon patient-level data that allow hypothesis generation, as such variables enable a deeper and more comprehensive interpretation. It is also interesting to note the changing role of adjunctive diagnostic media, namely fractional flow reserve (FFR) and imaging, that seem to be regaining popularity.

Structural heart disease data are still scarce and the registry is undergoing data transfer from a spreadsheet to a specific and dedicated electronic platform. Available data currently demonstrate the preference for the transfemoral route for TAVI procedures.

This analysis has important limitations. Inclusion of data from all centres was achieved only in 2013, and the figures presented here are based on the patients included in the registry for specific years, which ranged between 97% in 2010 and 99% in 2015. Patients are not followed systematically, and the RNCI does not currently have either internal or external auditing.

In 2013 all Portuguese interventional cardiology centres were participating in the National Registry of Interventional Cardiology. PCI increased by twofold per million population and concomitantly we observed the growing importance of primary angioplasty and of the radial approach. Valvular percutaneous procedures increased by fourfold. Portuguese operator volume increase caused a generalised expansion of main percutaneous cardiac interventions from 2010 until 2015.

Serbia: coronary and structural heart interventions from 2010 to 2015