Percutaneous sympathectomy of the renal arteries: the OneShot™ Renal Denervation System is not associated with significant vessel wall injury

Aims: Renal artery denervation (RADN) is an emerging technique for the treatment of resistant hypertension (RH). However, the use of the available systems has been associated with vascular injury, resulting in vasospasm and vessel wall thrombosis. The OneShot™ System (Covidien, San Jose, CA, USA) is an irrigated radiofrequency balloon designed to reduce vessel heating and injury during RADN.

Methods and results: The aim of the present study was to evaluate the target vessel morphological features before and after renal ablation using the OneShot™ RADN system. In this prospective observational study, 12 renal arteries of patients underwent RADN using the OneShot™ RADN System. Pre-procedural and post-procedural optical coherence tomography (OCT) pullbacks were performed and evaluated. No evidence for vasospasm, oedema or intraluminal thrombus formation was detected. Limited arterial dissections, after RADN, occurred in three renal arteries and did not require additional treatments. A sustained reduction of office blood pressure levels was observed over six months of follow-up in all the patients.

Conclusions: This study demonstrates that, in a small patient population, RADN using the OneShot™ Renal Denervation System is not associated with arterial spasm or thrombus formation on the vessel wall.

Percutaneous sympathectomy of the renal arteries, or renal artery denervation (RADN), is an emerging technique for the treatment of resistant hypertension1.

The mid-term and long-term results, in terms of office blood pressure reduction, support the diffusion of this procedure in clinical practice. Registry data and small randomised trials have shown that RADN effectively lowers blood pressure in patients with treatment-resistant hypertension2,3.

It has recently been reported that the use of two commercially available catheter-based RADN systems is associated with a significant local and diffuse vasospasm, as well as tissue damage resulting in vessel wall thrombosis4. This vessel wall damage is probably caused by tissue heating resulting from radiofrequency (RF) energy delivery and could be responsible for atherosclerosis progression in the long term5.

Therefore, the aim of the present study was to evaluate the morphological features before and after renal ablation using the OneShot™ Renal Denervation System.

This was a prospective observational study conducted at the Clinica Montevergine, Mercogliano, Italy. Individuals were eligible for the study if they were ≥18 years old and had a primary and idiopathic cause of resistant arterial hypertension, defined as failure to achieve goal blood pressure (BP) (>140/90 mmHg for the overall population, and >130/80 mmHg for those with diabetes mellitus or chronic kidney disease) when a patient adheres to maximum tolerated doses of three antihypertensive drugs including a diuretic6,7. Patients were excluded from the study if the glomerular filtration rate was less than 45 mL/min or if the minimum renal artery diameter was less than 4 mm5.

All patients were on daily aspirin 100 mg or received 500 mg aspirin intravenously before starting the RNA procedure. No patient was on dual antiplatelet therapy at the time of the procedure. For anticoagulation, 70-100 IU/kg of heparin was administered before wiring the first target renal artery, with the intention of achieving an ACT of >250 seconds. Additional heparin was administered at operator discretion according to ACT values.

All procedures were performed percutaneously, with the patient under slight sedation, and using the OneShot™ Renal Denervation System (Covidien)5. The major components of the OneShot™ system are the irrigated RF balloon catheter and a radiofrequency generator (RFG) with an integrated pump.

The RF balloon catheter was placed in the distal lumen of the main renal artery over a conventional 0.014” interventional guidewire through a guide catheter (7 to 8 Fr).

A monopolar silver electrode is mounted on the non-compliant balloon in a helical configuration ensuring delivery of RF energy in a spiral pattern without the need to manipulate the catheter.

Radiopaque markers identify the balloon ends for positioning under fluoroscopy. Balloon catheters are available in 5, 6 and 7 mm balloon diameter sizes, providing the ability to treat vessels from 4 mm to 7 mm in diameter with a 20 mm landing zone. The balloon is inflated to nominal size at 1 atm with normal saline delivered by the pump integrated into the RFG. The inflated balloon stabilises electrode contact with the renal arterial wall. During ablation, saline seeps from irrigation holes, which are present along the electrode, and cools the treated part of the arterial wall. A single, two-minute, 25W RF ablation was delivered to each artery.

In total, 12 renal arteries were evaluated. In each renal artery, two pullbacks were routinely obtained pre-RNA and post-RNA. The OCT catheter was advanced over a conventional 0.014” angioplasty guidewire using a monorail lumen at the tip. Renal arteries were flushed of blood with Visipaque™ 320 (GE Healthcare Inc., Princeton, NJ, USA) at a flow rate of 8.0 mL/s. The acquisition sequence speed was 20 mm/s. Forty-eight pullbacks were performed before and after RADN. Only good to excellent quality pullbacks were included in the final analysis. Pullbacks with poor-to-moderate quality (vessel wall visible in less than 180 degrees; n=6) were excluded from the analysis. Optical coherence tomography pullbacks were analysed, using proprietary software, by two independent investigators blinded to the clinical and procedural characteristics of the patients. All pre- and post-procedural pullbacks were evaluated for local acute morphological vascular changes.

Oedema was defined as any significant endothelial-intimal notch detected on the luminal wall surface.

Vasospasm was defined by immediate loss of lumen area or lumen diameter in any part of the renal artery.

Intraluminal thrombus was defined as a protruding mass attached to the luminal surface with a diameter of 0.5 mm in at least three consecutive cross-sections.

Femoral sheaths were removed when ACT was <150 seconds. Access site haemostasis was achieved by manual compression in all patients.

A complete blood count, renal function assessment and fluid balance was obtained prior to hospital discharge.

All patients received a follow-up visit at one and six months. Clinical examination assessed overall general conditions, signs and symptoms, medication, hospitalisations or any type of complication occurring post procedure.

Baseline characteristics were summarised using frequency tables with count and proportion for each category, or mean and standard deviation (SD) as appropriate. We then performed paired t-tests for the pre- and post-comparisons for continuous variables. SPSS software (Chicago, IL, USA; Version 20.0) was used for all statistical analysis. A two-tailed p-value of 0.05 was considered as statistically significant.

Five patients were enrolled, two males and three females. The average age was 66.5±8.6 years. All patients had drug-resistant hypertension. Of the total number of patients included in the study, 80% had dyslipidaemia, 80% diabetes mellitus, 20% were current smokers at the time of inclusion, and 60% had known coronary artery disease or a stroke. Blood pressure at enrolment was PAS: 170±8.9 mmHg, PAD 87±4.5 mmHg, with a heart rate of 67±6 bpm. The average number of antihypertensive drugs was 4.2±0.4.

The median procedure time (from arterial access to final angiogram) was 78±8.3 minutes. In one patient, two accessory renal arteries were present and a denervation procedure was performed in each of them. As expected, denervation was accompanied by diffuse visceral non-radiating abdominal pain, which was managed by intravenous narcotic and sedative drugs. The pain did not persist after the radiofrequency energy application. The treatment was completed in all patients.

In total, 12 renal arteries were evaluated. Renal angiographic studies did not identify any focal renal artery irregularities immediately after radiofrequency energy delivery. In each artery two automatic OCT pullbacks were obtained before and after RADN. Cross-sections with excellent quality were drawn to calculate lumen diameters.

The OCT cross-sections did not show prominent vessel notches at the segments of the vessel where radiofrequency-derived energy had been delivered. In one case, intraluminal thrombus formation was detected (Table 1). Arterial dissections/disruptions after RADN occurred in three renal arteries (Table 1). Only one of these was evident at angiography and was class A, not requiring any additional treatment (Figure 1). 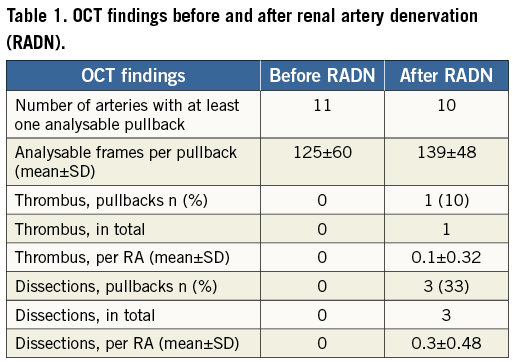 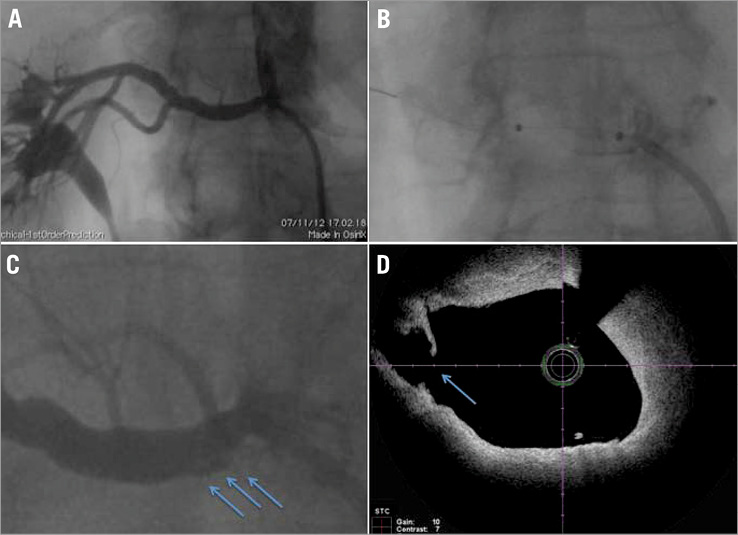 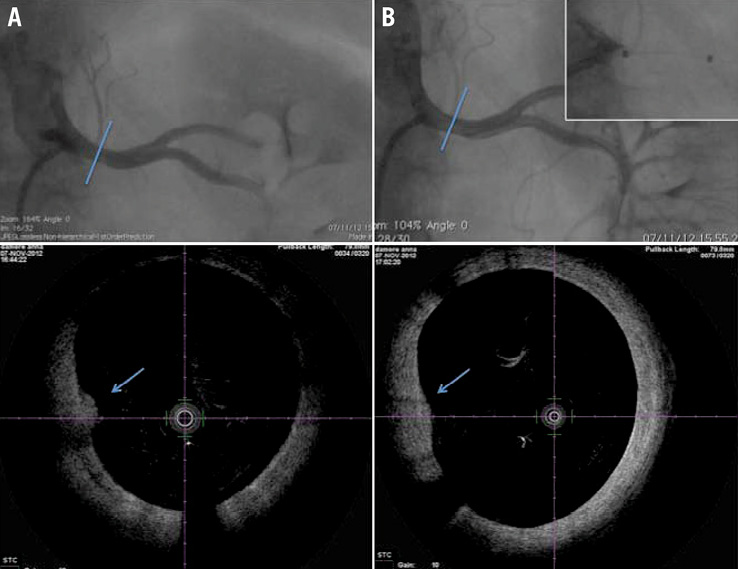 This study suggests that the use of the OneShot™ Renal Denervation System is able to reduce blood pressure levels over a mid-term follow-up in a small patient population and is associated with a limited amount of vessel wall injury.

Indeed, a recent report suggests that two of the commercially available RADN systems are associated with a significant local and diffuse vasospasm4.

In particular, OCT image reconstruction documented a circumscribed vascular spasm leading to a “string-of-pearls” feature, with a significant reduction in the mean renal artery diameter after RADN as well. Renal vasospasm can also result from catheter manipulation by the operator; however, the “string-of-pearls” pattern (encountered along the entire length of the treated renal artery) strongly suggests that such a generalised vasospasm of treated renal arteries most likely results from the mechanical stress induced by the ablation catheter tip or basket, respectively, and/or the applied radiofrequency energy itself rather than from catheter manipulation.

This “string-of-pearls” pattern was not detected in our study, and this is possibly related to the fact that the OneShot™ energy delivery balloon only inflates at 1 atm, thus providing a gentle apposition of the electrode to the vessel wall.

The use of other systems for RADN has also recently been associated with a significant amount of local tissue damage not apparent with angiography, i.e., oedema formation and thrombus generation at the sites of vessel ablation. This is probably related to the endothelial injury determined by the direct application of RF energy to the vessel wall and the consequent tissue heating. The OneShot™ system has the peculiarity that, during ablation, saline seeps from irrigation holes which are present along the electrode. Saline irrigation of the vessel wall is designed to mitigate damage to non-target arterial tissue.

The findings of our study suggest that the use of irrigation is efficient in reducing the incidence of thrombus formation at the vessel wall. In addition, local notches, which are signs of vessel wall oedema, were not detected.

We did observe three dissections after RADN. None of these was flow-limiting and no additional interventions were required. At this moment, we cannot tell if the dissections were induced by the balloon inflation or were related to vessel manipulation by the guiding catheter. It must be emphasised that an operator should be very careful in selecting the right balloon diameter and should be very gentle in handling the required guiding catheters (7 to 8 Fr).

At the time of writing this paper, we do not know if the absence of arterial injury associated with the use of the OneShot™ System will determine a better clinical outcome of the treated patients. Larger studies with short and long-term follow-up by OCT are now necessary to confirm the available data and to identify the pitfalls and advantages of each RADN dedicated system.

Moving image 2. Representative movie showing the OCT-based intravascular assessment of a renal artery after renal artery denervation using the OneShot™ System. A linear dissection of the atherosclerotic plaque is evident. The dissection is limited at the plaque and does not extend to the media.

Anxiety, depression, quality of life and stress in patients with resistant hypertension before and after catheter-based renal sympathetic denervation