Chronic total occlusion (CTO) lesions have been observed in as many as 16~18% of patients with coronary artery disease (CAD) referred for a coronary angiogram1,2. Previous studies have demonstrated that successful percutaneous coronary intervention (PCI) for CTO yields beneficial effects including symptom relief, improving quality of life, and improving left ventricular function3,4,5,6. However, even with emerging new techniques and novel devices, percutaneous treatment of CTO lesions remains a major challenge7.

In the present study, we evaluated the incidence, predictors, and management of microcatheter CC tracking failure in retrograde CTO-PCI.

Prospectively collected data for patients who underwent retrograde CTO-PCI performed at the Shanghai Institute of Cardiovascular Diseases, Zhongshan Hospital, Shanghai, were retrospectively analysed. Between March 2015 and January 2018, 371 consecutive retrograde CTO-PCI cases were screened from the database of the Chronic Total Occlusion Club, China (CTOCC). No attempted retrograde case was excluded. According to current clinical practice, only when patients displayed symptoms of ischaemia or when ischaemia was confirmed by non-invasive assessments related to occlusive coronary arteries was recanalisation therapy performed12,13. A total of four high-volume operators (>100 total CTO-PCI cases per year) and seven non-high-volume operators participated in the present study. Baseline characteristics, angiographic characteristics, procedural parameters, and in-hospital events were collected via electronic case report forms. The study complied with the Declaration of Helsinki. All patients provided informed consent for both the procedure and subsequent data collection and analysis for research purposes. The research protocol was approved by the ethics committee of Zhongshan Hospital.

CTO was defined as Thrombolysis In Myocardial Infarction (TIMI) grade 0 flow and the duration of coronary occlusion ≥3 months7,14,15. The J-CTO score was calculated according to the study reported by Morino et al16. CC grade was defined according to the report by Werner et al17. Tortuosity, as defined by McEntegart et al18 and CC score, as defined by Huang et al19 were adopted in the present study. Adverse channel entry and exit angles were defined using a cut-off angle <90°18. Morphological assessments of first attempted collaterals were recorded for retrograde wire tracking failure procedures. All of the angiograms were reviewed by at least two qualified interventional cardiologists. If there were any ambiguities in the evaluation of angiograms, the angiograms were then subjected to independent review by a third qualified interventional cardiologist.

All patients without a contraindication received dual antiplatelet therapy (aspirin and clopidogrel/ticagrelor). Heparin was introduced intravenously to achieve an activated clotting time of 300 to 350 seconds during the procedure. Selection of vascular access site was at the operator’s discretion, and bilateral coronary injections were performed to evaluate CTO lesion morphology. The retrograde approach was used as the primary approach or after failure of the antegrade approach. The retrograde approach was initiated by manipulating a floppy wire into a CC supported by a 150 cm microcatheter22, such as the Corsair™ (Asahi Intecc, Aichi, Japan), Finecross® MG (Terumo Corp., Tokyo, Japan) or other microcatheters. The wires used for CC tracking included SION® (Asahi Intecc), SION® black (Asahi Intecc), SION® blue (Asahi Intecc), SUOH 03 (Asahi Intecc), Fielder™ XT-R (Asahi Intecc), Fielder™ FC (Asahi Intecc), and Runthrough® NS (Terumo Corp.). After wire CC tracking success, microcatheter advancement through the CC was attempted. Utilisation of the retrograde wire technique depended on the patient’s coronary anatomy and general condition during the procedure. Generally, retrograde wire crossing and the kissing wire technique were preferred for short lesions, and the reverse controlled antegrade or retrograde subintimal tracking (CART) technique9,23 for longer lesions. After recanalisation, drug-eluting stents were implanted to achieve procedural success.

The data are expressed as the mean±SD for the continuous variables and as frequencies for the categorical variables. The comparison of continuous variables was performed by the independent Student’s t-test or the Mann-Whitney U test, as appropriate. Statistical analysis of the categorical variables was performed using Pearson’s chi-square or Fisher’s exact test (when at least 25% of values showed expected cell frequencies <5), as appropriate. Stepwise logistic regression analysis was conducted to identify the angiographic and procedural predictors. Univariate analysis was initially performed and univariate variables with p-values <0.05 were thereafter included in the multivariate model. P-values were two-tailed, and p<0.05 was considered statistically significant. The data were analysed using statistical software SPSS, Version 20.0 (IBM Corp., Armonk, NY, USA).

The baseline clinical characteristics are summarised in Table 1. In the present study, a procedural success rate of 76.5% (284/371) and a clinical success rate of 76.0% (282/371) were achieved. No deaths were observed. Three occurrences of Q-wave MI were adjudicated, two of which were related to the occlusion of diagonal branches proximal to left anterior descending artery CTOs; the third was due to stent implantation in the false lumen followed by subacute stent thrombosis. One patient was recommended for bypass surgery four days after the index procedure of a failed right coronary artery CTO-PCI. In terms of complications, the occurrence of donor vessel dissection and target vessel perforation was 0.8% (3/371) and 2.4% (9/371), respectively. Collateral perforations, consisting of 11 septal and 16 epicardial collateral perforations, occurred in 7.3% of all cases. A total of nine (2.4%) cases exhibited pericardial tamponade, and pericardiocentesis was performed in eight (2.2%) cases. One patient, in whom delayed pericardial tamponade was found, was only given conservative treatment due to gradually decreased pericardial effusion. 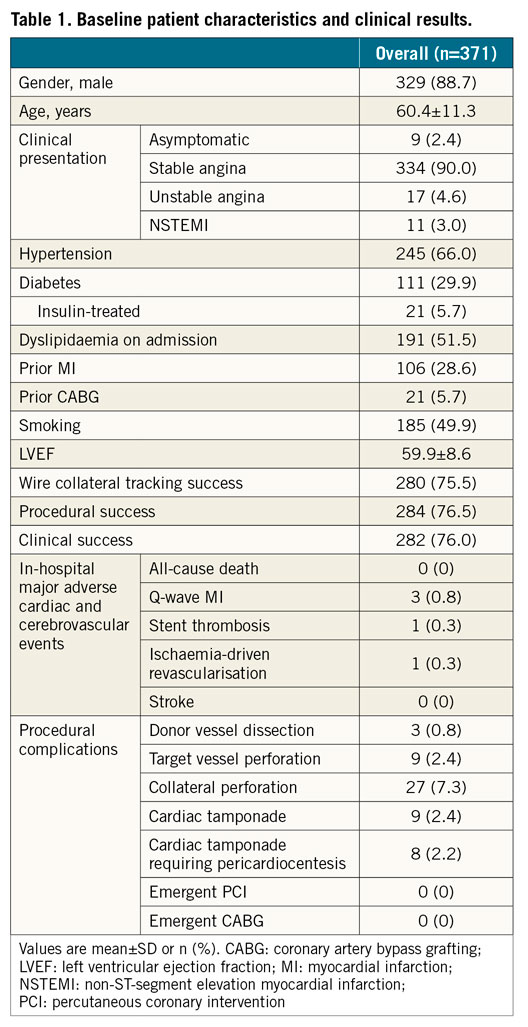 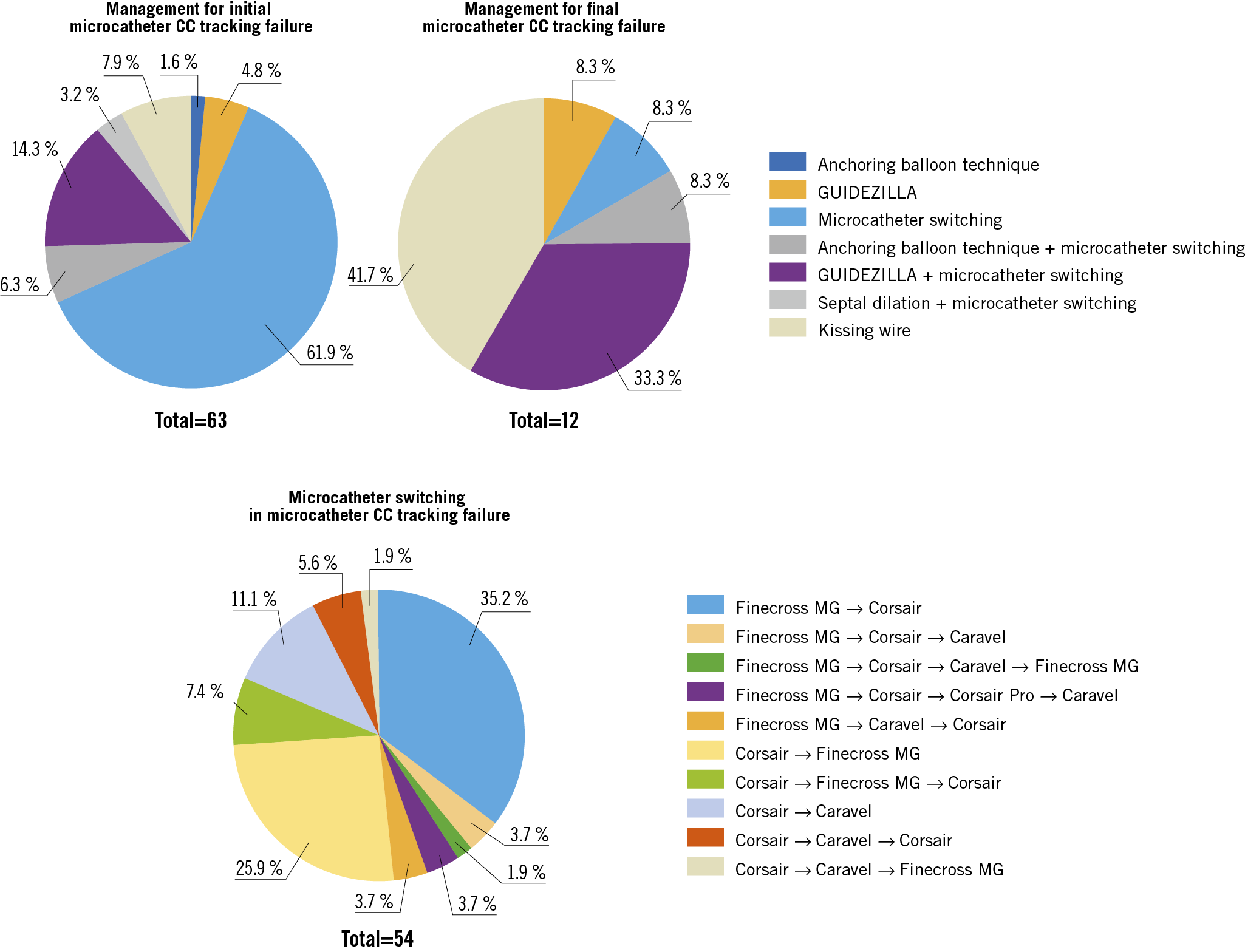 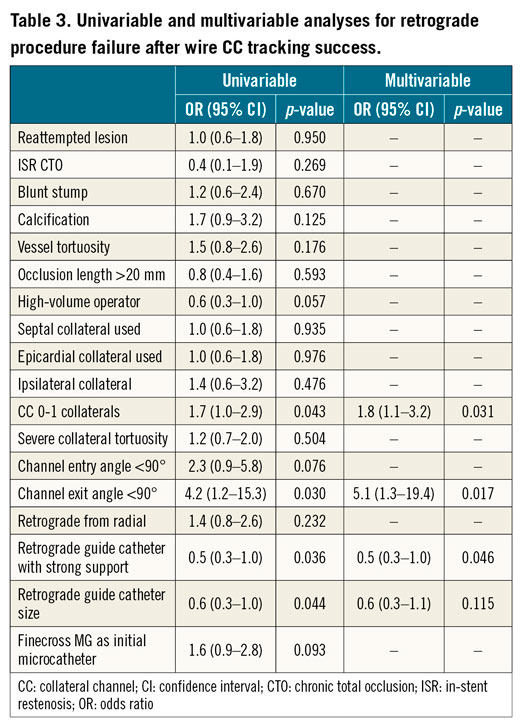 Regarding the back-up support of guide catheters, several items including retrograde access, retrograde guide catheter type and catheter size were analysed. The results did not show significant differences among these characteristics. However, we should exercise great caution in coming to this conclusion. In our daily practice, we found microcatheter CC tracking failure paired with weaker back-up guide catheters in some cases. Since guide catheter switching was always the second choice just after wire CC tracking success, selecting a retrograde guide catheter with extra back-up support played a pivotal role in the whole procedure. Simple and effective measures to increase guide catheter support present in the current study included the deployment of guide catheter extensions, such as GUIDEZILLA, and anchoring balloon technique. Another alternative was septal channel dilation using a small balloon at a low atm pressure. In the present study, septal channel dilation was performed in two procedures. One case used a small balloon and the other the THREADER™ micro-dilatation catheter (Boston Scientific). As a result, after management, the final success rate of microcatheter CC tracking achieved was 95.7%. The suggested management for microcatheter CC tracking failure is illustrated in Figure 3. It is very important to point out that, when the combination of the above measures fails, the kissing wire technique may be a reasonable option in some cases. Modified microcatheter rendezvous was also an option if the retrograde wire could cross the occluded segment. 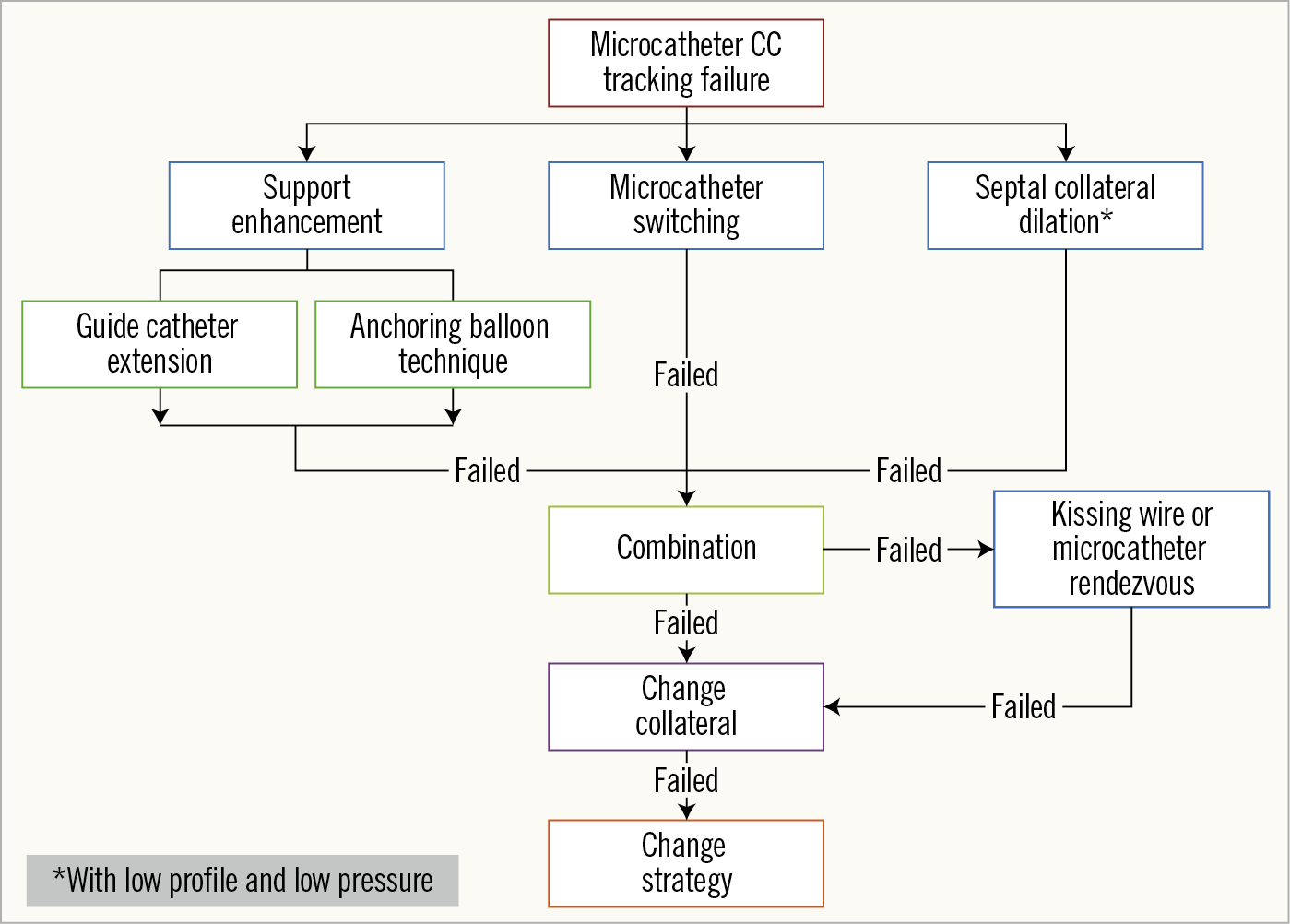 Several limitations of the present study should be mentioned. First, the retrospective, single-centre study design may have resulted in potential for bias in patient selection and interventional strategy. Second, both high-volume and non-high-volume operators were involved in this study. While there were no significant differences in procedural characteristics between the two groups, a higher J-CTO score (3.0±1.0 vs. 2.8±0.9, p=0.042) was noted in the high-volume operator group. The high-volume operator group also demonstrated a higher wire CC tracking success rate (79.3% vs. 64.6%, p=0.004) and overall procedural success rate (82.2% vs. 60.4%, p<0.001) (n=371). However, after wire CC tracking success (n=280), there were no significant differences in initial microcatheter CC tracking failure between high- and non-high-volume operators (Table 2). Third, the J-CTO score (3.0±1.0) in the present study was relatively higher than in some registries. This may be partly related to the specificity of the retrograde subgroup and heterogeneous evaluation among operators. Fourth, this study included a relatively small sample size and it may need a future large prospective study to validate its findings. Fifth, the average contrast consumption was 382.9±142.7 ml, which may be related to the high proportion of rescue retrograde approach use after a failed antegrade attempt (73.3%). Additionally, even with widely used perioperative hydration, more attention needs to be paid to control contrast consumption.

The authors would like to thank Steve Huang (Shanghai Institute of Cardiovascular Diseases, Zhongshan Hospital, Fudan University) for language editing support. The authors also wish to acknowledge the cardiac interventional specialists who contributed to the database of the CTOCC.