Methods and results: The COMPARE II study was a prospective, randomised, multicentre, all-comers trial in which 2,707 patients were randomly allocated (2:1) to BES or EES. The pre-specified endpoint at three years was major adverse cardiac events (MACE), a composite of cardiac death, non-fatal myocardial infarction (MI), or target vessel revascularisation (TVR). Moreover, the combined endpoint all-cause death or MI was analysed as a safety, and TVR as an efficacy measure. Three-year follow-up was available in 2,683 patients (99.1%). At three years, MACE occurred in 213 patients (11.9%) in the BES group and in 101 patients (11.1 %) in the EES group (p=0.57). The rate of the combined safety endpoint all-cause death or MI was 9.3% in the BES group vs. 8.4% (p=0.52), while the efficacy measure TVR was 7.6% in BES vs. 6.5% (p=0.27). Interestingly, definite stent thrombosis rates did not differ between groups (1.2% for BES vs. 0.8%, p=0.33).

Conclusions: At three-year follow-up, MACE as well as safety and efficacy measures including stent thrombosis were not statistically different between the biodegradable polymer-coated BES and the durable polymer-coated EES. ClinicalTrials.gov Identifier: NCT01233453

Drug-eluting stents (DES) with biodegradable polymers have been developed to address the risk of very late adverse events such as stent thrombosis, which have been partially attributed to the durable polymer responsible for controlling drug release. Although direct evidence remains scarce, durable polymer of first-generation DES has been linked to enduring inflammatory response at the implantation site, thereby resulting in: 1) delayed re-endothelialisation and/or late-acquired malapposition, both prone to thrombotic events, as well as 2) late restenosis due to increased neointimal proliferation1-9.

DES with biodegradable polymer have been developed to mitigate this dilemma and combine the best of both worlds, i.e., the efficacy of DES and the late safety associated with bare metal stents (BMS). Recent results have underlined the safety benefits of biodegradable polymer-coated DES when compared to first-generation DES in terms of a significant reduction in very late stent thrombosis events and associated composite clinical outcomes10.

However, newer-generation durable polymer-coated DES have also been designed to improve polymer biocompatibility and, currently, the cobalt-chromium everolimus-eluting stent (EES) with durable fluoropolymer is regarded, due to its safety and efficacy profile, as the gold standard11.

Patients were evaluated at one, six, 12, 24 and 36 months at the outpatient clinic or by post, e-mail or telephone regarding medication regime and adverse events. All sites were monitored. Reportable clinical events were adjudicated by an independent committee, blinded to treatment allocation. The sponsor of this study had no involvement in the conduct of the study, data monitoring, data analysis, or writing of the report. The corresponding author had full access to all the data in the study and had final responsibility for its publication. The study complied with the CONSORT 2010 Statement of the Declaration of Helsinki and was approved by all the institutional ethics committees of the participating centres.

The study was designed as a non-inferiority trial at one year with a non-inferiority margin of 4%. Based on previous reports of EES and BES stent study event rates, the inclusion of 2,700 patients, including 5% loss to follow-up, would result in a 90% power to detect non-inferiority according to the Newcombe-Wilson score method. The current analysis, including subgroup analysis across clinically relevant subgroups at three-year follow-up, was pre-specified per protocol. Categorical variables are presented as numbers and percentages and were compared with the Fisher’s exact test, due to the low prevalence of some baseline variables. Continuous variables were expressed as mean±SD or medians with interquartile ranges. Continuous variables were compared using the Wilcoxon rank-sum test. All analyses were performed according to the intention-to-treat principle. Time to the respective endpoint was analysed according to the Kaplan-Meier method and the log-rank test was applied to compare the incidence of endpoints between groups. The landmark analysis used the one-year landmark. Thus, patients who had experienced the event of interest during the first year following the index procedure were excluded from analysis.

All p-values were two-sided, and a p-value of less than 0.05 was regarded as statistically significant. SAS version 8.02 (SAS Institute Inc., Cary, NC, USA) was used for analysis.

In total, 2,707 patients (4,025 lesions) undergoing PCI were randomised 2:1 to BES (1,795 patients with 2,638 treated lesions) or EES (912 patients with 1,387 treated lesions). At three years, follow-up data were available in 1,780 out of 1,795 patients in the BES group (99.2%) and 903 out of 912 patients in the EES group (99.0%) (Figure 1). Detailed characteristics of baseline clinical, angiographic and procedural features have been previously presented13. Table 1 summarises the main baseline characteristics which were well balanced between groups. Briefly, the mean age was 63 years with 22% diabetic patients, 58% presenting with acute coronary syndrome (ACS), and 25% receiving multivessel PCI. Angiographic and procedural characteristics are displayed in Table 2. 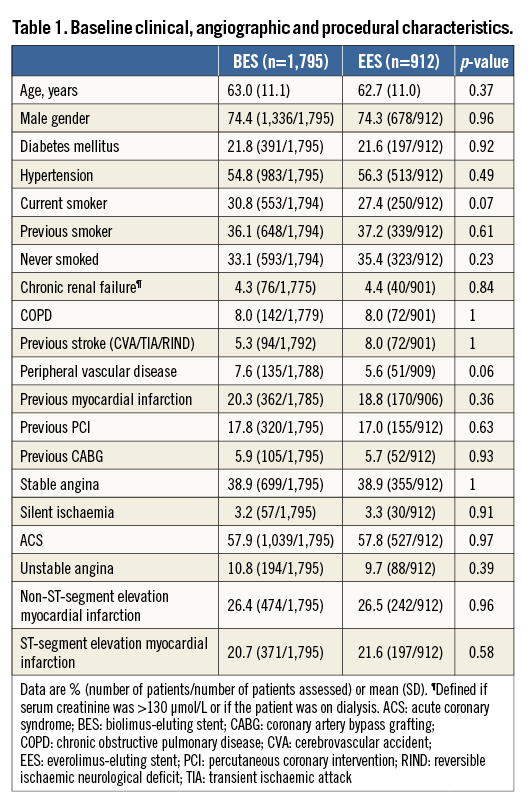 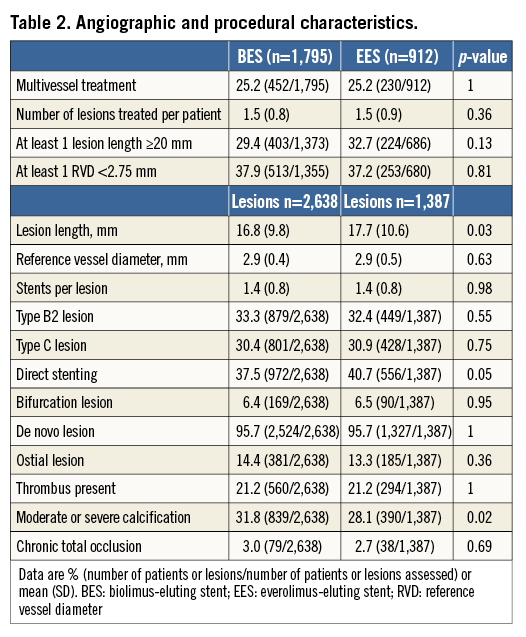 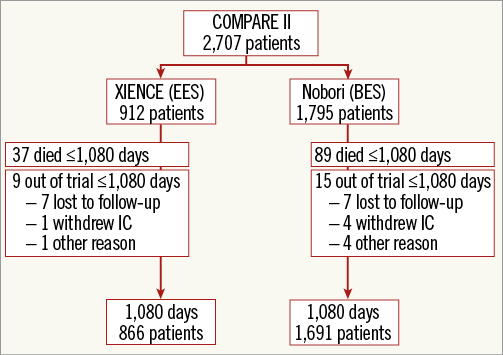 Of note, no differences were observed regarding DAPT adherence between groups through the three-year follow-up (Online Table 1).

Three-year clinical event rates are detailed in Table 3. The pre-specified composite outcome MACE (cardiac death, non-fatal MI or TVR) occurred in 213 patients (11.9%) in the BES group and in 101 patients (11.1 %) in the EES group (relative risk 1.08 [95% CI: 0.84-1.39], p=0.54). Other safety and efficacy endpoints including the device-oriented endpoint TLF as well as definite and definite/probable stent thrombosis were similar between groups. 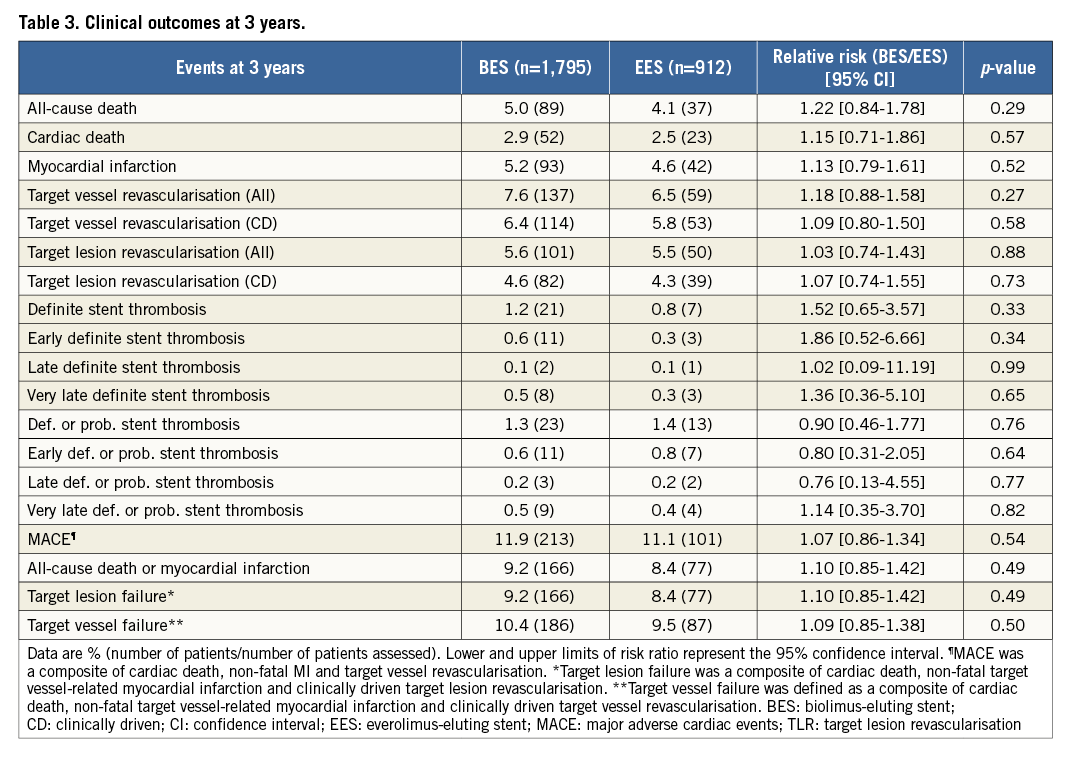 The Kaplan-Meier time-to-event curves for the endpoint MACE, as well as the individual endpoints cardiac death, MI, TVR, and stent thrombosis, are shown in Figure 2. 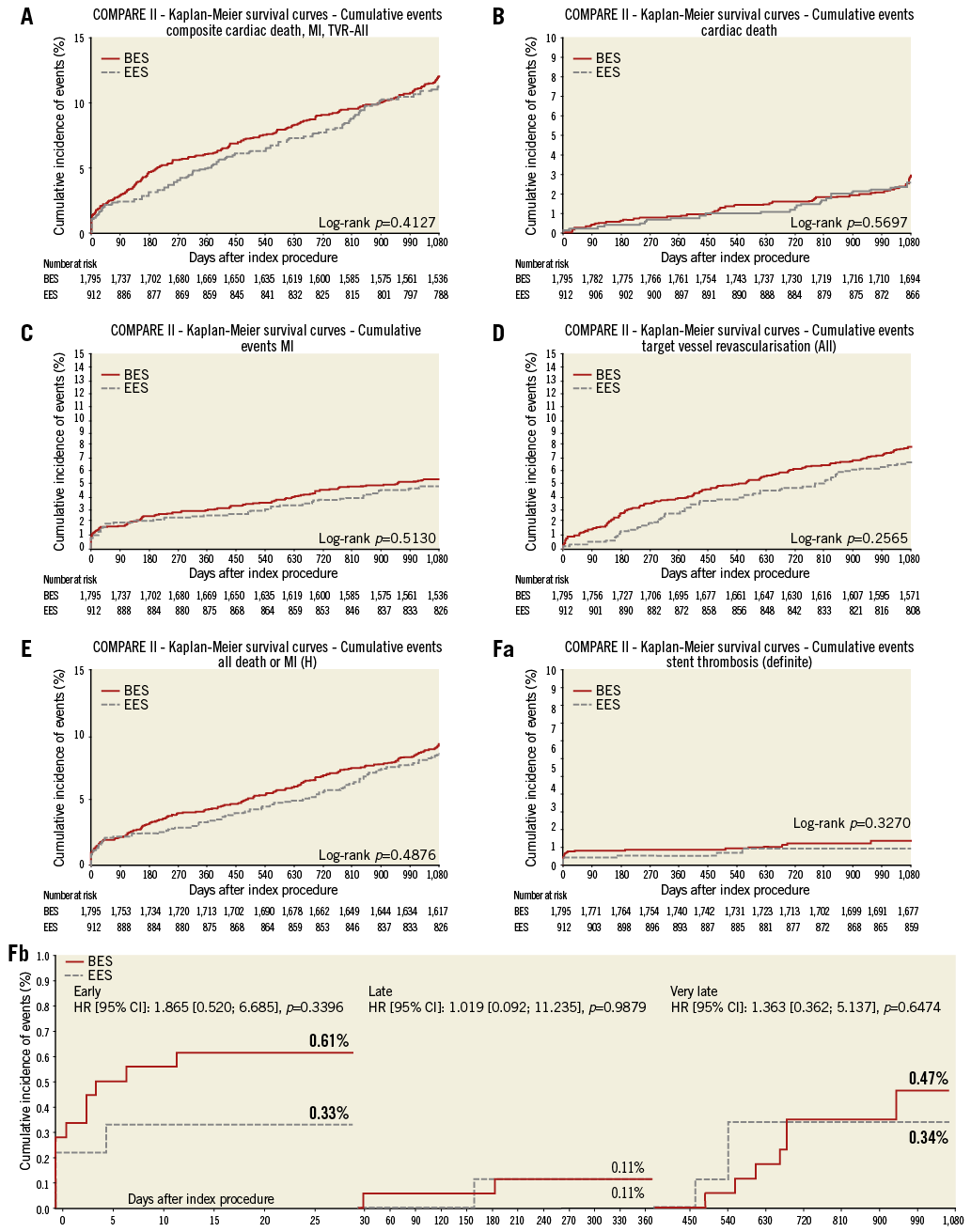 The one-year landmark analysis showed no significant differences in incremental event rates between one and three-year follow-up (Online Table 2).

The comparable clinical outcomes between stent groups held true over a wide range of subgroups (Figure 3). 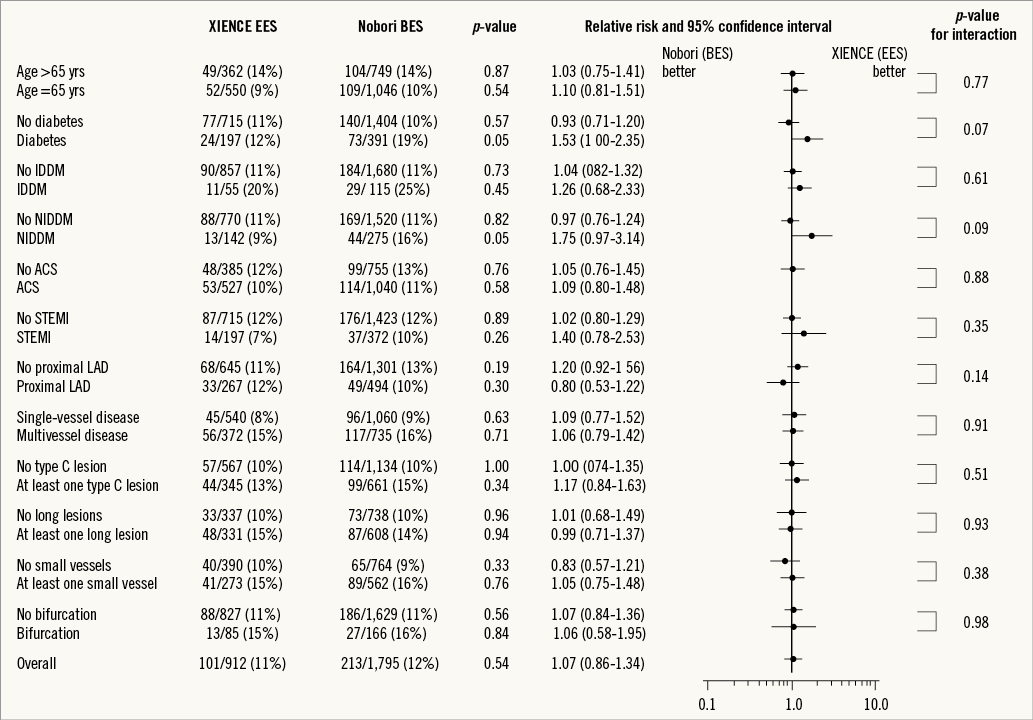 The present trial is one of the largest randomised studies of patients treated with biodegradable polymer DES in comparison to second-generation DES stents and the first to report on three-year follow-up. The principal findings of this trial are: 1) that the biodegradable polymer-coated BES (Nobori) has a similar safety and efficacy profile at three years compared to the gold standard durable polymer-coated EES (XIENCE or PROMUS); and 2) that landmark analysis did not indicate any benefit of BES over EES in terms of safety or efficacy beyond the first treatment year. Indeed, the event curves for the cumulative pre-specified endpoint MACE started diverging at three months but were superimposed again at three years.

To date, only one other study (NEXT) has evaluated exclusively the biodegradable polymer BES versus a second-generation DES in an all-comers PCI population, and recently confirmed equivalent clinical outcomes at two years between Nobori BES and XIENCE EES in a Japanese PCI cohort14. Whilst most event rates reported are comparable to the present study, a much lower definite stent thrombosis rate was observed in the NEXT trial with regard to both stent groups, which might be attributed to fewer ACS patients being included, as well as regional differences in patient and procedural characteristics.

In the present study, about 22% of included patients were diabetics. Subgroup analysis revealed a better outcome with regard to the composite endpoint MACE of diabetic patients treated with EES compared to BES, though the p-value for interaction was not significant (p=0.07). Limited data exist concerning diabetic patients treated with biodegradable polymer compared to newer-generation durable polymer DES. Results from the NEXT and ISAR-TEST 4 trials did not show any association of diabetic state and clinical outcomes at two and five-year follow-up, respectively. The results of the present subgroup analysis have to be regarded as hypothesis-generating, and warrant further investigation in a properly powered analysis.

Potential benefits in safety and efficacy measures of the biodegradable polymer-coated DES compared to the durable polymer DES are expected beyond the first treatment year after drug elution and polymer breakdown, leaving the bare metal stent platform in the vessel. Indeed, implantation of biodegradable polymer DES has been associated with more complete re-endothelialisation as well as preserved endothelium-dependent vasomotion when compared to first-generation SES3,19,20. However, a recent randomised comparison of BES (Nobori) and EES (XIENCE), using intravascular optical coherence tomography, reported similar stent coverage and apposition at six to eight months21. This note supports the observed similar clinical outcomes, in particular with regard to stent thrombosis rates.

Although designed as an all-comers study, only 26% of patients undergoing percutaneous interventions were enrolled in the study, so selection bias cannot be ruled out. The power of the present study was attenuated by the lower than expected event rates of the primary endpoints used for sample-size calculation13. Secondly, we report on a secondary endpoint, and testing of the primary endpoint at multiple time points other than the specified one-year primary endpoint is subject to the perils of multiple testing.

At three years, the combined endpoint MACE as well as the safety and efficacy endpoints were not statistically different in the Nobori biodegradable polymer-coated BES group compared with the current standard durable polymer-coated EES. Despite similar clinical outcomes, BES does not indicate any benefits, in particular towards reduction of very late adverse events, thus challenging the concept of biodegradable polymer coating. Whether differences in clinical outcome emerge beyond three years needs to be investigated.

The study was supported by a grant from Terumo Europe (Leuven, Belgium) and the Research Foundation of the Cardiology Department, Maasstad Hospital (Rotterdam, The Netherlands). 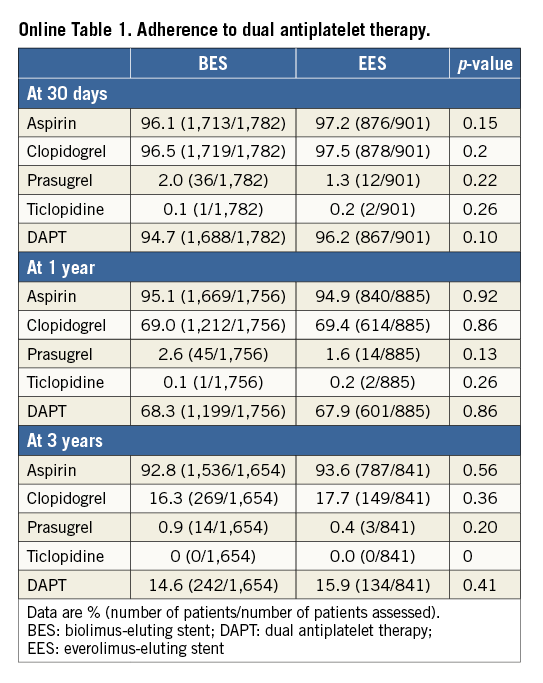 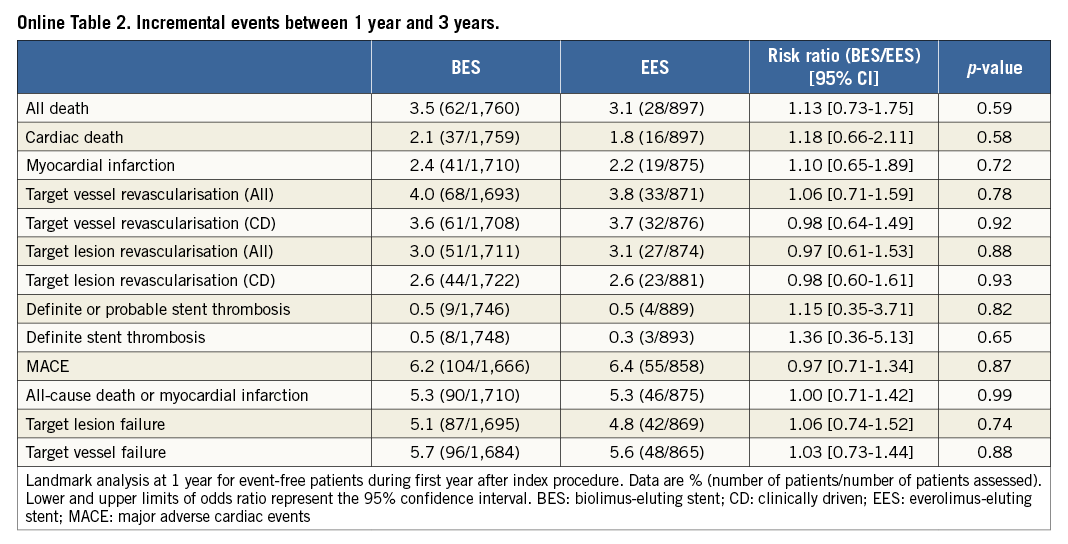