Aims: We aimed to evaluate the impact of delay from diagnostic pre-hospital electrocardiogram (ECG) to wiring of the infarct-related vessel (ECG-to-wire) >120 minutes on cardiovascular magnetic resonance (CMR) markers of reperfusion success and clinical outcome in patients with ST-segment elevation myocardial infarction (STEMI).

ECG-to-wire: time from diagnostic ECG to wiring of the infarct-related vessel

ST-segment elevation myocardial infarction (STEMI) is a major cause of morbidity and mortality in the Western world1. The recommended therapy for STEMI is reperfusion with primary percutaneous coronary intervention (primary PCI) to restore coronary blood flow as soon as possible2. This increases myocardial salvage, reduces infarct size and improves prognosis3,4. According to the recently updated guidelines, the time from STEMI diagnosis in the out-of-hospital setting to wire should not exceed 120 minutes, and initiation of fibrinolysis should be considered if PCI cannot be performed within this time window2. However, it is difficult to use a strict cut-off of 120 minutes on a patient-based level, and in many patients transferred for primary PCI with intended delay ≤120 minutes the recommended time limit may be exceeded. Since existing data on the effect of primary PCI in patients with time delay >120 minutes are post hoc analyses, the true impact of primary PCI performed beyond 120 minutes is unknown in the modern era of catheter-based revascularisation. Cardiovascular magnetic resonance (CMR) imaging accurately quantifies myocardial infarct size5, area at risk6, myocardial salvage index7, microvascular obstruction (MVO)8 and left ventricular (LV) function9 and can thus be utilised to assess treatment efficacy in STEMI patients. Therefore, evaluating these parameters and the clinical outcome may put into perspective the effect of primary angioplasty in STEMI patients undergoing late (>120 minutes) versus timely treatment (≤120 minutes).

Danish ambulances and emergency medical service helicopters are equipped for the acquisition of teletransmitted electrocardiograms (ECG), that are used for field triaging of STEMI patients to primary PCI. In this context, time of first ECG represents an exact time point of treatment initiation, and time from diagnostic ECG to wire (ECG-to-wire) serves as an accurate parameter for delay in treatment of STEMI patients.

The patients in this post hoc study participated in DANAMI-3 (The Third Danish study on Optimal Acute Treatment of Patients with ST-segment Elevation Myocardial Infarction), which has been described previously10. All patients in the present substudy were included at Rigshospitalet, Copenhagen University Hospital, Denmark, where CMR was performed. Rigshospitalet is the largest PCI centre in Denmark and performs primary PCI on a twenty-four hour, seven days a week basis. The hospital covers a population of 2.6 million citizens with transport distances of up to 175 kilometres. Patients were eligible if they had STEMI, were ≥18 years old and had acute onset of chest pain of <12 hours’ duration. None of the patients received fibrinolysis prior to the primary PCI. All patients provided written informed consent. The study was undertaken in accordance with the Declaration of Helsinki, and a local ethics committee in Copenhagen, Denmark, approved the protocol. The study was registered at www.clinicaltrials.gov (identifier: NCT01435408 and NCT01960933).

Time of diagnostic ECG and time of wiring of the infarct-related vessel were prospectively collected and stored at the Clinical Trial Unit of Rigshospitalet, Copenhagen University Hospital, Denmark.

A blinded observer analysed the images, using CVI42 (Circle Cardiovascular Imaging Inc., Calgary, Canada). A second observer reviewed all analyses. The epicardial and endocardial contours were manually traced, and the papillary muscles were incorporated as part of the LV cavity. The area at risk was defined as the hyperintense area on T2-weighted images. An area was reported as hyperintense when the signal intensity was >2 SD of the mean signal intensity of the normal myocardium. The infarct was defined as the hyperenhanced myocardium on the delayed gadolinium-enhanced images. A myocardial area was regarded as hyperenhanced when the signal intensity was >5 SD of the mean intensity of the normal myocardium. MVO was defined as hypointense core areas in the enhanced myocardium and included in the total infarct size. The salvage index was calculated as (area at risk-infarct size)/area at risk. Inter-observer reproducibility was assessed in 20 randomly chosen patients, and reproducibility for LVEF, infarct size and salvage index was considered highly acceptable11.

Differences between group means and medians were assessed with the Student’s t-test or Mann-Whitney U test according to normality for continuous variables. Categorical variables were compared using the chi-square test or Fisher’s exact test. Hazard ratios were calculated using Cox proportional hazards regression analyses, and the incidence of the combined endpoint of all-cause mortality and heart failure was presented using cumulative incidence curves. To adjust for potential confounders, a multivariable Cox regression analysis was performed adjusting for the following risk factors that are known to affect infarct size and/or outcome: age, sex, diabetes mellitus, hypertension, symptoms-to-ECG, Killip class, anterior infarct location, Thrombolysis In Myocardial Infarction (TIMI) flow pre-PCI, TIMI flow post-PCI and multivessel disease. The assumptions of proportional hazards and linearity of continuous variables were visually checked and deemed valid. Acute salvage index in four groups of ECG-to-wire delay (0-60, 61-120, 121-180 and >180 minutes, respectively) were compared by trend analysis using the Kruskal-Wallis test, and regression analyses were performed to assess the relationship between salvage index and ECG-to-wire as a continuous variable. In multivariable regression analysis, the effect of ECG-to-wire on salvage index was adjusted for the same variables as the survival analysis. Logistic regression analyses were used to identify predictors of small acute salvage index (<0.50). A predefined subgroup analysis of acute salvage index for patients with TIMI flow pre-PCI 0/1 versus 2/3 in the two groups of ECG-to-wire was carried out. Finally, interaction between TIMI flow pre-PCI and ECG-to-wire on salvage index and interaction between ECG-to-wire and randomised treatment (ischaemic post-conditioning and deferred stenting) on salvage index were assessed in analyses of covariance. A two-sided p-value <0.05 was considered statistically significant. All analyses were performed with SPSS software, Version 23.0 (IBM Corp., Armonk, NY, USA).

The study comprised 1,492 out of 1,620 patients enrolled in the DANAMI-3 trial at Rigshospitalet, Copenhagen, Denmark. Seventeen patients were excluded due to unsuccessful PCI, and 111 patients (8% in total) were excluded as the time of diagnostic ECG had not been recorded (Figure 1). A total of 304 patients (20%) had ECG-to-wire >120 minutes. Baseline characteristics are shown in Table 1. 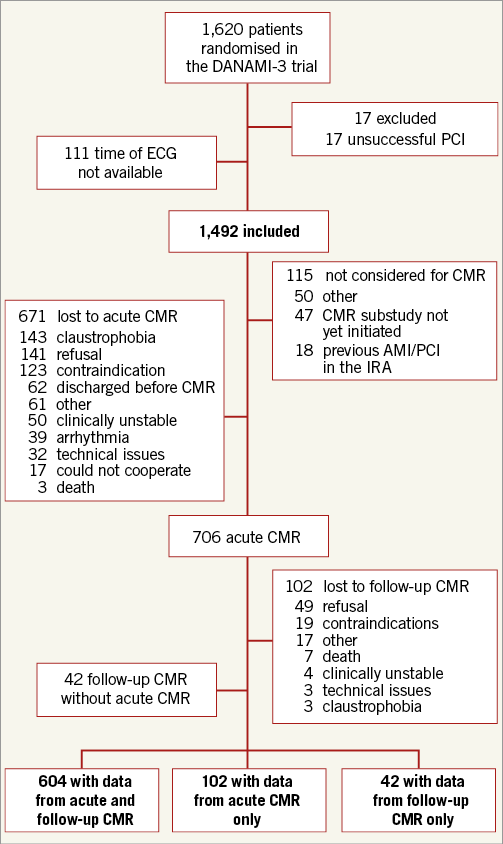 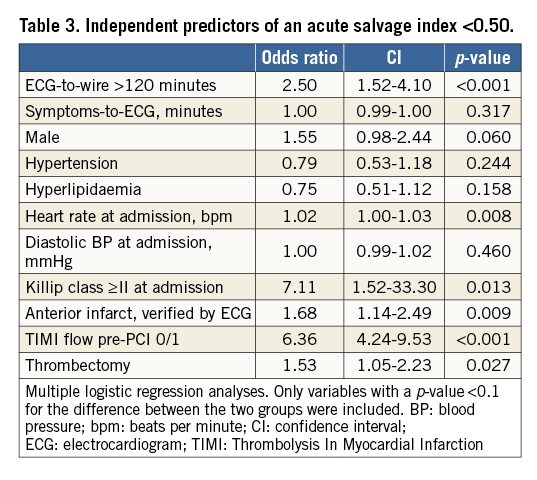 There was no interaction between ECG-to-wire and randomised treatment (ischaemic post-conditioning [p=0.197] or deferred stenting [p=0.149]) on the effect on salvage index.

The present study demonstrates for the first time that STEMI patients treated with primary PCI >120 minutes from diagnostic ECG have less myocardial salvage, larger infarct size and consequently a higher risk of all-cause mortality and heart failure. These findings support the current recommendation that PCI should be performed as soon as possible within 120 minutes to salvage myocardium. Importantly however, among patients with ECG-to-wire >120 minutes, 33% still experienced substantial myocardial salvage ≥0.50 and preserved LVEF, which indicates a marked effect of primary PCI also in these patients.

Time is a pivotal factor in successful treatment of STEMI patients12-15. Guidelines recommend that initiation of fibrinolysis followed by angiography, and PCI if indicated, should be considered in settings where primary PCI cannot be performed within 120 minutes of the STEMI diagnosis2. However, to the best of our knowledge, no clinical randomised trials have reported any beneficial effect of fibrinolysis or fibrinolysis followed by PCI compared with primary PCI alone regardless of delay. Different analyses using data from almost identical clinical trials concluded that acceptable PCI-related delays range from 60 to at least 120 minutes12-14. These delays were calculated on the basis of linear regression analyses plotting the absolute mortality benefit achieved by primary PCI compared with fibrinolysis against the observed PCI-related delay. However, the studies were hampered by inaccuracies in extraction of tabulated data, resulting in a possible underestimation of the maximal acceptable PCI-related delay13,15 and by a suboptimal treatment strategy in more than 50% of the patients who underwent primary PCI14. Of particular importance, after correction of the data, a repetition of the regression analysis did not document a statistically significant negative slope between increasing delay and loss of mortality benefit achieved by primary PCI15. This questions whether primary PCI ever becomes inferior to fibrinolysis regardless of delay. These results were also confirmed by the STREAM trial, which reported an increased risk of intracranial haemorrhage when using pre-hospital fibrinolysis followed by angiography versus primary PCI alone, but no difference in the composite clinical endpoint16. Thus, according to existing data, timely PCI is superior to fibrinolysis and the better outcome with primary PCI is levelled to be comparable with increasing time to wire but is at no time inferior to fibrinolysis. Our findings support recent 2017 guidelines that primary PCI should be initiated as soon as possible after a confirmed diagnosis of STEMI. However, our study also exemplifies that in a real-world setting it is impossible to ensure that all patients who are intended to undergo primary PCI within 120 minutes are actually treated within this time frame. Since it is inevitable that some patients will be treated with primary PCI beyond 120 minutes, it is important to evaluate the impact of primary PCI in these patients. In this perspective, our results suggest a considerable effect of primary PCI in patients with a delay >120 minutes, albeit the effect of pre-hospital fibrinolysis in patients with a delay >120 minutes is unknown.

The independent association between ECG-to-wire >120 minutes and increased risk of all-cause mortality and heart failure demonstrates that time to reperfusion mirrors salvaged myocardium and confirms the strong association between clinical outcome and infarct size7,17. However, 83% of patients with >120 minutes of reperfusion delay still did not suffer death or heart failure during 37 months of follow-up. This, in combination with the substantial amount of myocardial salvage and the relatively well-preserved LVEF (57% at three months), indicates that primary PCI offers robust results even beyond this timeline. Additionally, the effect of catheter-based revascularisation was independent of TIMI flow pre-PCI, which also points to an effect of late reperfusion. However, based on the present data, we are not able to determine whether fibrinolysis would have had similar beneficial effects.

Several studies have investigated the association between time intervals and myocardial damage using CMR or single photon emission computed tomography3,18,19. An imaging study showed that the salvage capacity of fibrinolysis decreased rapidly as time from symptom onset to treatment (treatment delay) increased, while the effect of primary PCI is less time-dependent18. On the other hand, a trial in primary PCI-treated patients reported a significant association between increasing treatment delay and increasing infarct size19. These conflicting reports may result from patient recall bias of symptom onset, pre-infarct angina with potential myocardial conditioning and the survivor-cohort effect4. A previous study used a more objective measure of delay (system delay; delay from first medical contact to PCI) and investigated its impact on myocardial salvage index3. These results are in line with ours, showing a substantial myocardial salvage in many patients despite a delay of more than 120 minutes.

This study is a post hoc analysis based on data from the DANAMI-3 trial in which the effect of ischaemic post-conditioning, deferred stenting and complete revascularisation was evaluated. Although no interaction was observed, unmeasured randomisation effects may be present. In addition, data from post hoc analyses should always be interpreted with caution. Secondly, almost 50% of the patients considered for CMR in the DANAMI-3 trial were lost. However, this does not necessarily impact on estimates of clinical outcome20. Thirdly, it would have been informative to include the patients with unsuccessful PCI in the analyses. However, data were not available. Finally, the study did not include data on fibrinolysis in STEMI patients, as our population was limited to STEMI patients treated with primary PCI.

This work was supported by the Danish Agency for Science, Technology and Innovation, and the Danish Council for Strategic Research (Eastern Denmark Initiative to Improve Revascularization Strategies [EDITORS], grant 09-066994).