How should I treat?

How should I treat subacute stent thrombosis in the context of brain haemorrhage with abciximab?

DIAGNOSIS: Subacute stent thrombosis in a patient with a recent cerebral haemorrhage secondary to aspirin, clopidogrel and abciximab infusion.

PRESENTATION OF THE CASE

A 56-year-old woman with a history of a cerebral aneurysm of 3.0 mm and breast cancer presented with sudden cardiac death. She was evaluated by emergency medical system personnel and referred for primary percutaneous coronary intervention (PCI) for an acute inferior myocardial infarction (MI) (Figure 1). The patient was placed in the cooling protocol for cerebral protection prior to being admitted for coronary angiography. 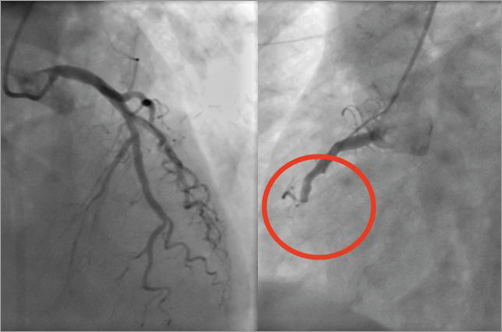 Coronary angiography revealed an occlusion of the right coronary artery (RCA). A bolus and infusion of abciximab were administered. Thrombectomy and bare metal stent implantation resolved the acute scenario (Figure 2). The patient showed a low weaning respiratory response and developed focal signs of neurological deterioration. An acute intracerebral haemorrhage was observed in the cerebral imaging (Figure 3).

A consensus on the antiplatelet treatment among the neurologist, haematologist and cardiology team indicated dual antiplatelet therapy with clopidogrel 75 mg and aspirin 100 mg daily.

Three days after primary PCI, during the “rewarming” phase, the patient developed agitation and haemodynamic deterioration. There was new ST-segment elevation in the inferior leads and a new angiography was ordered.

A new coronary angiogram revealed acute stent thrombosis (Figure 4). The initial approach included a loading dose of unfractionated heparin (100 UI/kg) and thrombectomy using the Eliminate™ aspiration catheter (Terumo, Tokyo, Japan). Despite multiple runs of thrombectomy, a large burden of thrombus remained on the angiographic image (Figure 5, Moving image 1). There was a clear contraindication to glycoprotein IIb/IIIa antagonist use, and the use of a different ADP inhibitor was controversial because of the intracranial haemorrhage which had previously developed. We therefore discussed the different therapeutic options. 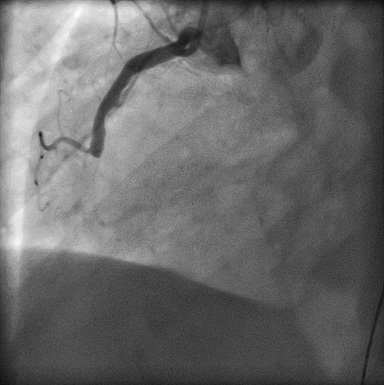 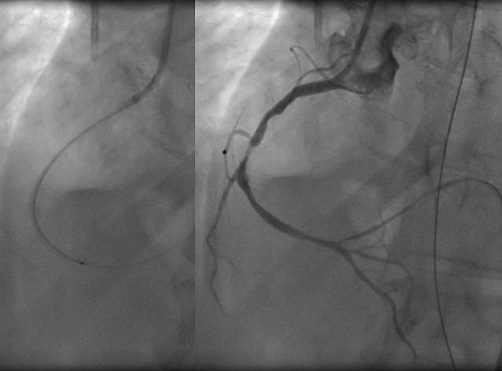 Figure 5. Runs of thrombectomy and image of persistent thrombus.

The case describes the dilemma of how to proceed after the re-opening of a subacute thrombotic closure of a recently stented coronary artery during primary percutaneous coronary intervention (PCI) with a residual large thrombus burden in a patient with an intracerebral haemorrhage. The indication for increasing the level of antiplatelet therapy in order to avoid a new coronary occlusion has to be weighed against the indication for ceasing all anticoagulation and antiplatelet therapy in order to limit the risk of aggravating the cerebral condition bringing the invasive cardiologist and neurologist into the strait guarded by Scylla and Charybdis.

Most coronary stent thromboses occur during the first month of implantation, and within the first days after bare metal stent implantation. The main predictors of acute and subacute stent thrombosis are edge dissections, stent undersizing and lack of (effect of) antiplatelet therapy1. In view of a possible lack of intestinal uptake of the thienopyridine in the present patient, inhibition of platelet reactivity should be assured. Although no details are given of the size or length of the implanted stent, it seems fair to suspect possible edge dissection, stent undersizing or underexpansion during the first intervention. Intravascular ultrasound (IVUS) and optical coherence tomography (OCT) will visualise these “complications” and, in case of underexpansion or need for additional stent implantation, mitigate the need for an increase in platelet inhibition. So, adequate stent coverage/expansion guided by IVUS or OCT should be the first treatment of choice. Even in case of considerable thrombus burden after adequate stent expansion, we would not recommend implantation of micronet mesh or other covered stents, which could probably alleviate the immediate intra-lesion thrombus burden and increase ST-segment resolution, but would probably not decrease the risk of a new stent thrombosis. Albeit tempting, in view of an increased risk of recurrent stent thrombosis in this patient with breast cancer, we do not find it advisable to increase the level of antiplatelet treatment using glycoprotein IIb/IIIa antagonists or more potent ADP receptor inhibitors, because cerebral recovery should be given highest priority. Coronary artery bypass grafting would also not be considered in this patient with a recent intracerebral haemorrhage. It is important to establish whether the intracerebral haemorrhage is subarachnoid and has a connection to the already diagnosed aneurysm, in which case acute coiling of the aneurysm should be considered in concert with the neurologist and neuroradiologist.

This is a really excellent case for discussion. Mild hypothermia is associated with impaired coagulation tests in laboratory conditions, including platelet activity2,3. Body temperature may thus have contributed to the intracranial bleeding in the setting of very intensive antiplatelet therapy and may also explain the coincidence of the “rewarming” phase and stent thrombosis.

As far as the episode of stent thrombosis is concerned, I would also have selected unfractionated heparin, but the dose used (100 IU/kg) seems to be relatively high. I agree that the risk of adding a glycoprotein IIb/IIIa inhibitor is excessive. There is evidence that the efficacy of oral clopidogrel medication is lower in critically ill patients4. Ticagrelor might have a theoretical advantage over clopidogrel from a pharmacological perspective; however, any clinical relevance in this setting is not known.

Platelet activity and coagulation may not be the only contributing factors to stent thrombosis. Vessel sizing during primary PCI is never easy as the infarct-related artery is typically affected by spasm. The stent/artery size is not reported by the authors but the stent size in Figure 2 seems to be similar to the size of guiding catheter and by my visual estimation appears rather small. Intracoronary imaging might be helpful in this setting to confirm or rule out stent undersizing. Another important factor would be the state of the inferior wall of the left ventricle. There are very few branches visible in the periphery of the right coronary artery in Figure 5 in comparison to Figure 2. The crucial question would be: “How much myocardium can still be salvaged?”.

I would not like to “dodge” the clear question asked by the authors. If I were the operator in this case, I would proceed with the following steps: 1) administration of verapamil intracoronary to prevent no-flow; 2) post-dilatation with a larger balloon within the previously implanted stent (most likely 3.5 or 4 mm diameter balloon; if vessel size was not clear, I would perform optical coherence tomography for sizing and apposition); 3) potentially a no-flow situation would need to be treated by another use of an aspiration catheter and distal injection of vasodilatation medication; 4) once the stent is post-dilated and good flow has been restored I would finish the PCI; 5) I would continue with aspirin 100 mg daily and switch from clopidogrel to ticagrelor 90 mg twice daily until the patient is extubated.

The overall patient interest should always remain the main goal. A haemodynamically stable patient with inferior wall myocardial infarction is likely to survive even without successful revascularisation. Should there be another episode of intracranial bleeding, then the risk of in-hospital death or long-term disability is very high.

The author has no conflicts of interest to declare.

How did I treat?

ACTUAL TREATMENT AND MANAGEMENT OF CASE

We decided to continue with a conservative approach by the use of antiplatelet therapy with clopidogrel and aspirin as prescribed. After a brief discussion with the rest of the team, we decided to place a distal protection device (FilterWire EZ®; Boston Scientific, Natick, MA, USA) (Moving image 2), then we fractured the remaining thrombus with continuous balloon inflation (Figure 6, Moving image 3). Angiographic control showed a good result, and there was no remaining thrombus in the in-stent segment; however, the flow to the posterolateral branch was TIMI 0. Interestingly, the patient remained clinically stable and no alterations were present in the ECG (Figure 7). A bare metal stent was then deployed in the proximal segment of the previous stent (Moving image 4). 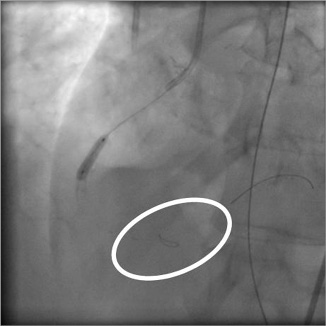 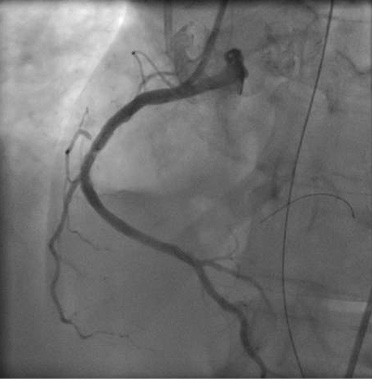 After removal of the distal protection device, flow to the posterolateral branch was restored (TIMI 3), and the nest of the device was filled with “red” thrombus and debris (Figure 8, Moving image 5- Moving image 7). 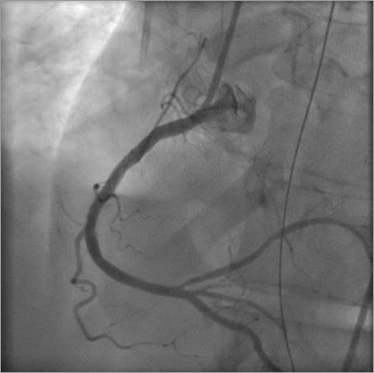 The cooling protocol ended after the described procedure. Eight days after the index procedure the patient was extubated without complications. CT-scan control of the brain haemorrhage showed improvement of the initial images. The patient made a good recovery during in-hospital stay without signs of motor or sensitive impairment, continued with dual antiplatelet therapy, and was discharged home after 27 days. No genetic analysis of clopidogrel response was performed because of lack of equipment during this period of time.

This case highlights the potential risks of the antiplatelet regimen administered in patients during acute coronary syndromes. Although there is no formal contraindication to glycoprotein IIb/IIIa antagonist use after prolonged RCP or cerebral arterial tree abnormalities, caution is mandatory when treating these high-risk patients. Usually, these patients have been excluded from safety trials.

Therapeutic hypothermia improves survival and confers neuroprotection in out-of-hospital cardiac arrest. It has been described in patients with concurrent ST-segment elevation myocardial infarction with a survival rate of 56%, and 92% of survivors discharged with a positive neurological outcome5. Recently, we described a higher than expected incidence of re-thrombotic events during the cooling and rewarming phase6. Thus, caution has to be exercised in patients requiring therapeutic hypothermia who are under current oral antiplatelet agents.

We could manage this uncommon situation by the strategy of repeated balloon inflation in order to fracture the thrombus and with the protection of a distal embolic protection device. Although the use of embolic protection devices in the setting of acute myocardial infarction has not been well demonstrated in clinical trials, in a scenario of a large vessel with high thrombus burden that cannot be removed by manual thrombectomy this strategy may be of help.

Moving image 4. Stent implantation at the mid segment of RCA.

Moving image 7. Angiographic results after removal of the FilterWire EZ®. Flow to the posterolateral branch was restored.