HOW SHOULD I TREAT?

How should I treat a TAVI-eligible patient with a left ventricular thrombus and rapid clinical deterioration?

INVESTIGATION: The day before the procedure the patient underwent an echocardiogram (as per in-house pre-procedural protocol). A large mobile thrombus was discovered at the left ventricular apex, and the TAVI procedure was cancelled.

MANAGEMENT: As the patient presented four weeks later with worsening symptoms of acute heart failure and could not be weaned from intravenous furosemide, the Heart Team decided to proceed with TAVI, trying to minimise wire manipulations throughout the procedure. An Evolut R system was implanted with no complications. Three days after the procedure, the patient was off intravenous diuretics and able to walk around the ward.

PRESENTATION OF THE CASE

An 89-year-old male with a history of symptomatic heart failure due to severe degenerative aortic stenosis (aortic valve area 0.7 cm2) and chronic renal failure (eGFR=25 ml/min/1.73 m2) was discussed by our institutional Heart Team in November 2015 and a transcatheter aortic valve implantation (TAVI) procedure was scheduled. The day before the procedure the patient underwent an echocardiogram (as per our in-house protocols) and a large mobile thrombus was discovered in the left ventricular apex (Figure 1, Moving image 1). This had not been present in previous imaging studies. The TAVI procedure was cancelled and the patient was discharged on acenocoumarol per os, with concurrent subcutaneous enoxaparin 0.4 mg twice daily until the international normalised ratio was >2.5. Follow-up was scheduled for three months later, with telephone contacts for acenocoumarol dosage adjustment. However, the patient presented four weeks later with acute dyspnoea, with worsening symptoms over the previous few days, without any changes in dietary salt intake or medication dosage reduction (on the contrary, antidiuretic treatment had been intensified by his physician to the maximal tolerated doses). He was admitted and started on intravenous diuretics. His symptoms improved but he could not be weaned from intravenous furosemide. A new echocardiogram showed a significant reduction in thrombus size (Figure 1, Moving image 2) but also a reduction in LV ejection fraction (from 30% to 20%) (Figure 2) and a marked increase in right ventricular systolic pressure (from 55 to 88 mmHg) (Figure 3). The Heart Team reassessed the case to decide among the three available options: i) treat and wait until the thrombus disappeared, with the patient in worsening functional status and essentially dependent on intravenous treatment, ii) proceed with TAVI, or iii) opt for surgical aortic valve replacement despite the high surgical risk. 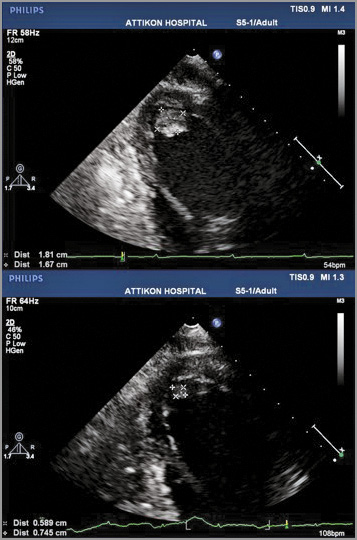 Figure 1. Transthoracic echocardiogram the day before the (cancelled) TAVI procedure (top), and the day the patient presented with decompensated heart failure (bottom). The thrombus had shrunk by more than 50% but had not completely dissolved. 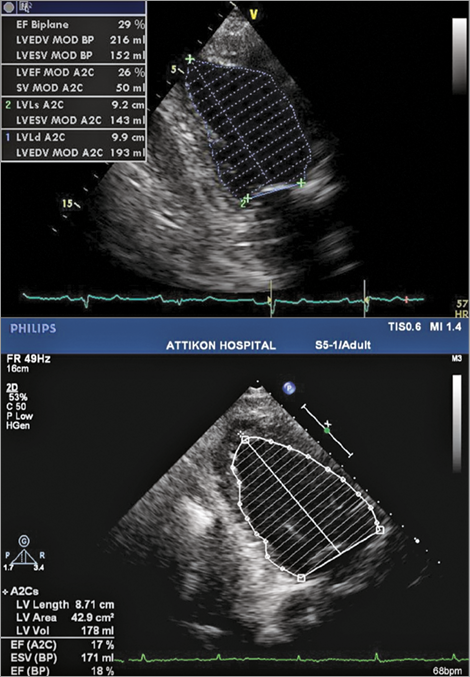 Intracardiac thrombi have been detected by transoesophageal echocardiography in up to 11% of patients referred for transcatheter aortic valve implantation (TAVI)1. Dense spontaneous echo contrast in the left atrium, which is also a risk factor for cardioembolic stroke, may be even more frequent and has been observed in up to 24% of TAVI patients1. The most frequent location of intracardiac thrombi in TAVI patients is the left atrial appendage (LAA)1, linked to atrial fibrillation, which is common among TAVI patients1. Thrombus formation has also been observed within the left ventricle (LV) in patients with previous myocardial infarction and/or LV dysfunction2.

In the present case of an 89-year-old male patient with critical aortic valve stenosis and severely depressed left ventricular function, a large mobile thrombus was discovered in the left ventricular apex. The TAVI procedure which had been scheduled initially was abandoned and the patient discharged on an oral anticoagulant. After four weeks, the patient was re-admitted with severe clinical and echocardiographic deterioration. The LV thrombus was still present, although significantly reduced in size.

The presence of intracardiac thrombi is usually considered a contraindication for TAVI1. Thrombus embolisation from the LAA may occur with rapid pacing and/or wire/catheter manipulations3. In the presence of LV thrombus, the risk of embolisation may be excessive since the stiff guidewire has to be positioned in the apex for transfemoral TAVI. A transapical approach may be impossible in the presence of thrombus in the apex. Embolic protection devices have been used to prevent periprocedural cerebral embolisation of atherothrombotic debris during TAVI4. Previous investigators have also described the successful use of filter protection in a similar case of an 86-year-old patient with LV thrombus not responsive to anticoagulation2. Interestingly, in this case the filter did not show thromboembolic material although the LV thrombus was gone after the procedure. Nevertheless, the patient did well without evidence of cerebral or peripheral embolisation2.

For the present patient with rapid clinical deterioration, there are three options. The first option is surgical aortic valve replacement with thrombus resection, preferably using a rapid deployment valve. In the present 89-year-old patient, the logistic EuroSCORE I is calculated as 25.21% (age, poor LV function). Previous data from the German AQUA registry showed that the in-hospital mortality of patients in such a risk class (EuroSCORE 20-30%) after conventional surgery exceeds that after TAVI (12.2% vs. 5.5%, p<0.001)5. Nevertheless, in selected patients, surgery may be an option but requires face-to-face evaluation of the patient by the Heart Team. We would probably choose the second option, which is intensive anticoagulation and deferring the TAVI procedure as long as possible. Since the thrombus had regressed well with four weeks of anticoagulation, we would hope that another cycle of four weeks may be sufficient to dissolve the thrombus completely. However, if the patient could not be further stabilised with medical therapy, a third option would be to perform TAVI with an embolic protection device (and intensive anticoagulation during the procedure). Even if this approach may prevent cerebrovascular accidents, it has to be taken into consideration that the risk of periprocedural major bleeding is increased, as is the risk of systemic/peripheral embolisation. Therefore, individual assessment and counselling of the patient and his family is a major task for the Heart Team.

First, I would have checked for another reason for this worsening situation. Serial troponin measures and a coronary angiogram would have allowed the ruling out of silent acute coronary syndrome and potentially changed the antithrombotic regimen.

If there was no concomitant coronary artery disease, I would bridge VKA to parenteral heparin and perform TAVI immediately, given the rapid dissolution of the apical thrombus. This thrombus appears organised, flat and at low risk of embolisation.

If there was concomitant coronary artery disease, I would treat the last remaining patent artery or the left main disease using DES, after loading with aspirin and clopidogrel. In a second step, I would perform TAVI after bridging VKA to parenteral heparin. From such an approach we may expect an improved left ventricular ejection fraction and potentially a better recovery and a higher benefit from the TAVI procedure.

Given the high risk of recurrence of the apical thrombus and the low ejection fraction, long-term oral anticoagulation following TAVI is recommended. I would therefore bridge parenteral anticoagulation to oral anticoagulation after the TAVI procedure once the patient has stabilised. This means no more sheaths in the body and no evidence of ongoing bleeding. I would recommend the use of a non-VKA direct anticoagulant, given their better safety profile in frail patients. I would advise very short-term triple therapy (less than one month) in case of concomitant CAD requiring percutaneous coronary intervention.

I would inform the patient and his relatives that the risk of procedure-related vascular events, including ischaemic stroke and major bleeding, is very high (more than 10%). This is because of the remaining thrombus, the need for switching from an antithrombotic regimen and the refractory heart failure. I would inform the patient that he would be at much higher risk if the procedure was postponed. Waiting for a longer time period may lead to worsening of the cardiovascular status, a higher-risk TAVI procedure with little expected benefit and possible final cancellation by the Heart Team due to poor life expectancy.

The choice of the TAVI device would be driven by anatomical considerations in this particular case.

How did I treat?

ACTUAL TREATMENT AND MANAGEMENT OF THE CASE

The Heart Team decided that the patient’s rapid clinical deterioration, without evidence of non-compliance or some other precipitating factor, required an immediate therapeutic response. The surgical option was deemed too risky, especially in view of the recent clinical decompensation. In addition, even if surgery was decided upon, there was still substantial risk of thrombus dislocation and embolisation. The “watchful waiting” approach was considered as an option that would expose the patient to all the risks of a long hospital stay and the high probability of a new clinical destabilisation. In a recent report regarding patients with severe aortic stenosis and acute heart failure, “urgent” TAVI appeared to be a feasible and viable option, with high procedural success6. Similar results have been reported after “emergency” TAVI in patients with cardiogenic shock due to severe aortic stenosis7. However, in this case the balance between the expected benefit from TAVI and the risk from a probable thrombus-related complication would have to be carefully assessed. The presence of left ventricular thrombus is generally considered a relative contraindication to TAVI, as the stiff wire that crosses the aortic valve may dislodge or “decapitate” a mobile thrombus, increasing the likelihood of an acute cerebrovascular accident8.

Finally, after having discussed the advantages and risks of each therapeutic strategy with the patient himself, it was decided to proceed with TAVI. The operators would try to minimise wire (Confida™ Brecker Guidewire; Medtronic, Minneapolis, MN, USA) manipulations, maintaining the large wire loop at the mid-ventricular level (Figure 4) throughout the procedure. To this end, a third operator was added to the deployment team, whose sole role was to watch and handle the wire during deployment so as to maintain it far from the left ventricular apex. Under general anaesthesia, an Evolut™ R system (Medtronic) was implanted through the right transfemoral approach, with no complications. Three days after the procedure, the patient was off intravenous diuretics and able to walk around the ward. There were no neurological symptoms or signs and no cognitive decline. Left ventricular ejection fraction, estimated pulmonary artery systolic pressure, and mitral inflow pattern were markedly improved (Figure 5). 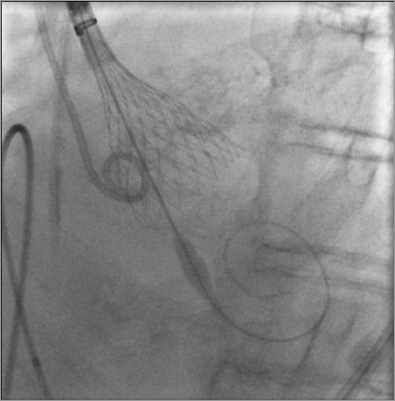 Figure 4. Deployment of the Evolut R valve. Special care was taken to keep the guidewire at the mid-ventricular level. 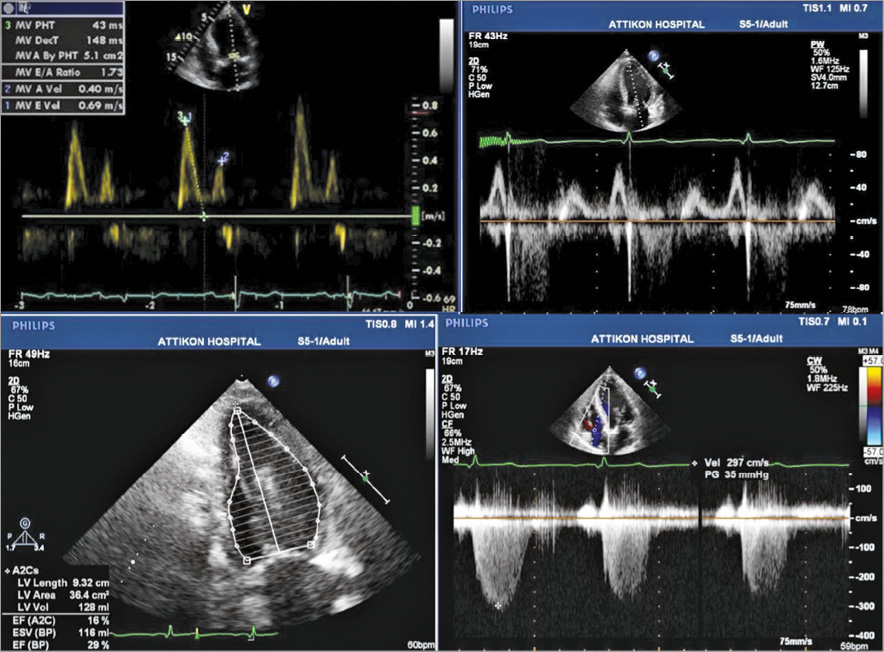 Moving image 1. Transthoracic echocardiogram on the day before the cancelled procedure. A massive thrombus was imaged at the left ventricular apex. The patient was started on acenocoumarol.

Moving image 2. Transthoracic echocardiogram following four weeks of per os anticoagulant treatment. The thrombus is smaller but still there.

How should I treat an asymptomatic aortic coarctation with a concomitant dissection of the descending aorta?