Advances in percutaneous coronary intervention (PCI)-related technologies have allowed patients with increasingly complex medical conditions to be treated with PCI, resulting in more challenging post-PCI management1. As appropriate antiplatelet therapy is a cornerstone of PCI management, assessment of thrombotic and bleeding risk is essential2,3. The Academic Research Consortium for High Bleeding Risk (ARC-HBR) initiative aimed to define HBR in patients undergoing PCI through literature review and clinical consensus, thus enabling more consistent and higher quality clinical study data collection and reporting, and facilitating appropriate clinical practice recommendations or regulatory decisions1,4. Although not fully validated, the ARC-HBR criteria are a convenient tool for use in clinical practice because they do not require scores to be calculated and include factors that are not traditionally considered as risk factors.

Previous studies in East Asian patients have reported different risk profiles for thrombosis and bleeding compared with Western patients5. A lower dose of antiplatelet therapy was recommended for patients in Asian countries, owing to concerns with respect to a greater risk of bleeding6. However, the ARC consensus document suggests that there is a paucity of data in East Asians, stating that more research is required to elucidate the applicability of the ARC definition of HBR to Asian populations1.

The PENDULUM (Platelet rEactivity in patieNts with DrUg eLUting stent and balancing risk of bleeding and ischeMic event) registry represents contemporary PCI practice, implementing a transradial approach and proton pump inhibitors (PPIs) in daily clinical practice7. The objective of this analysis was to evaluate the applicability of ARC-HBR criteria for Japanese patients participating in the PENDULUM registry, and to explore criteria related to HBR in Japanese patients.

The PENDULUM registry (UMIN 000020332) was a prospective, multicentre study of Japanese patients who underwent PCI in a real-world setting. The study protocol was approved by the appropriate ethics panel at each participating centre, and the study was performed in accordance with the principles of the Declaration of Helsinki and applicable Japanese guidelines. All patients provided written informed consent.

Full details of the PENDULUM registry have been described previously7 and are also provided in Supplementary Table 1. In brief, inclusion criteria were age ≥20 years, an indication for PCI with a second-generation drug-eluting stent (DES), and receipt of an antiplatelet treatment. The type and dose of antiplatelet drug administered to patients were at the investigator’s discretion. There were no limitations placed on the treatment of any complications arising during follow-up.

The primary endpoint for this analysis was the cumulative incidence of major bleeding at 12 months post index PCI. Major bleeding was defined as Bleeding Academic Research Consortium (BARC) types 3 and 58. The secondary endpoint was the cumulative incidence of intracranial haemorrhage (ICH). ICH was defined as a non-ischaemic stroke (e.g., cerebral haemorrhage, subarachnoid haemorrhage) with neurologic symptoms or with newly developed signs, and where the culprit lesion was detected by computed tomography or magnetic resonance imaging scans. Bleeding events were evaluated by independent assessment committees.

The PENDULUM registry7 was a prospective registry that was initiated in 2015, prior to the publication of the ARC-HBR criteria in 20191. Therefore, we have integrated the prospectively collected PENDULUM data into a post hoc retrospective criterion analysis; no additional data were collected for this post hoc analysis.

For individual ARC-HBR criteria and clinically relevant variables, the one-year cumulative incidence of major bleeding and ICH was estimated using the Kaplan-Meier method. Hazard ratios (HR) and 95% confidence intervals (CI) were generated with Cox proportional hazards regression models. Univariate and multivariate Cox proportional hazards regression models were used to identify independent predictors of major bleeding. Covariates included in the multivariate model were the ARC-HBR criteria, criteria which were considered to be clinically important, and the criteria that showed ≥4% cumulative incidence in the stratified analysis, which were not procedure-related but were clinically important. Discrimination of the bleeding risk score was assessed by C-statistics. The area under the curve as well as predictive BARC 3 or 5 bleeding probabilities were compared. All tests were two-sided with a 5% level of significance. Statistical analyses were performed using SAS, Release 9.4 (SAS Institute, Cary, NC, USA).

A total of 6,267 patients were enrolled in the PENDULUM registry, of whom 3,185 (50.8%) were in the HBR group and 3,082 (49.2%) were in the non-HBR group (Figure 1A, Table 1). The overall mean age was 70 years, and 37.1% were ≥75 years old. The HBR group included more patients who were older (≥75 years), had diabetes, and did not present with acute coronary syndrome (Figure 1B, Table 1). Baseline laboratory parameters are described in Supplementary Table 3. Dual antiplatelet therapy (DAPT) was continued for 12 months after index PCI in 72.4% of HBR patients and in 84.1% of non-HBR patients (p<0.001). Details of DAPT adherence over time are provided in Supplementary Figure 1. Except for some factors (age ≥75 years, moderate anaemia, and moderate chronic kidney disease), the proportion of patients with a single ARC-HBR criterion was only approximately 10% for each criterion; almost all patients had overlapping ARC-HBR criteria (Supplementary Figure 2). 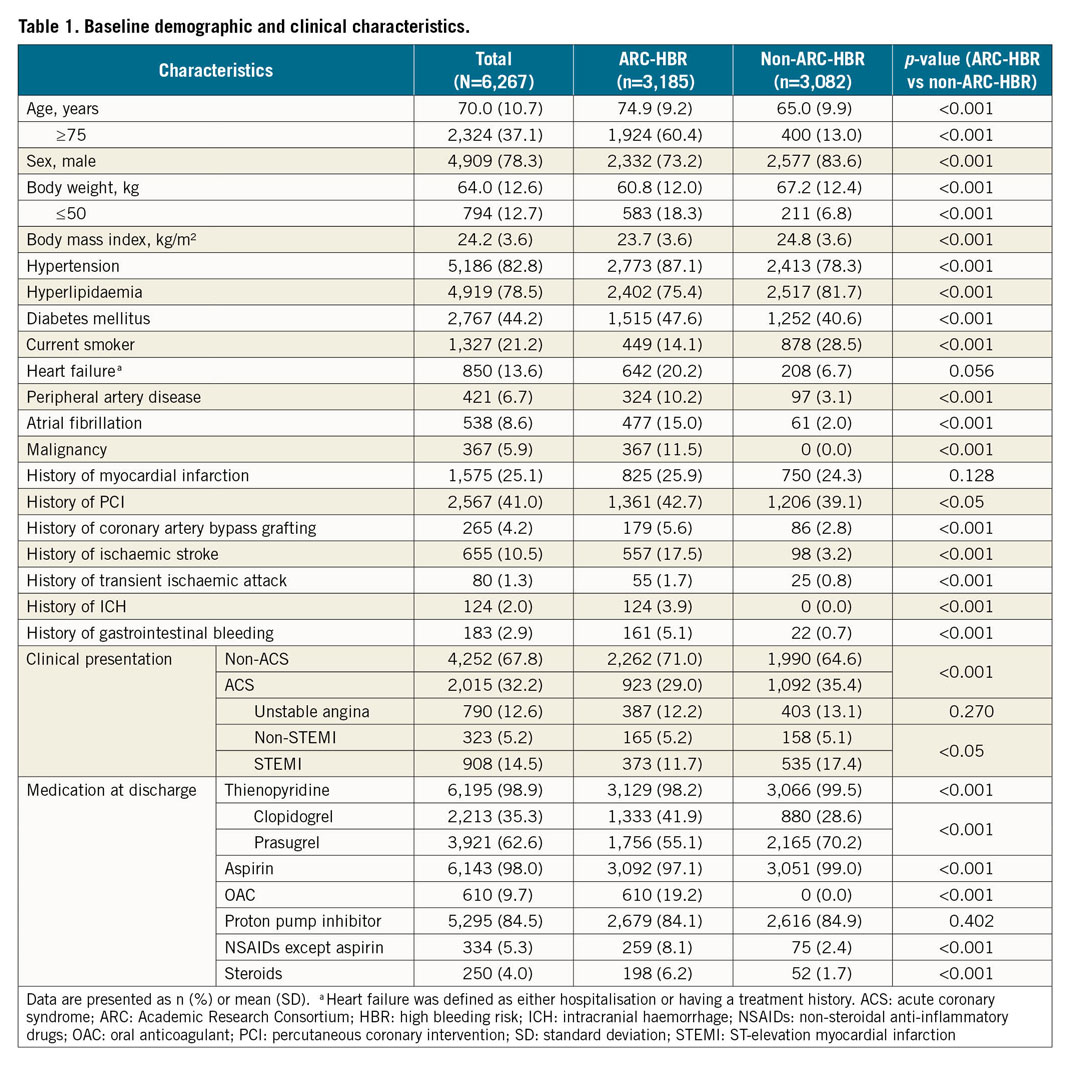 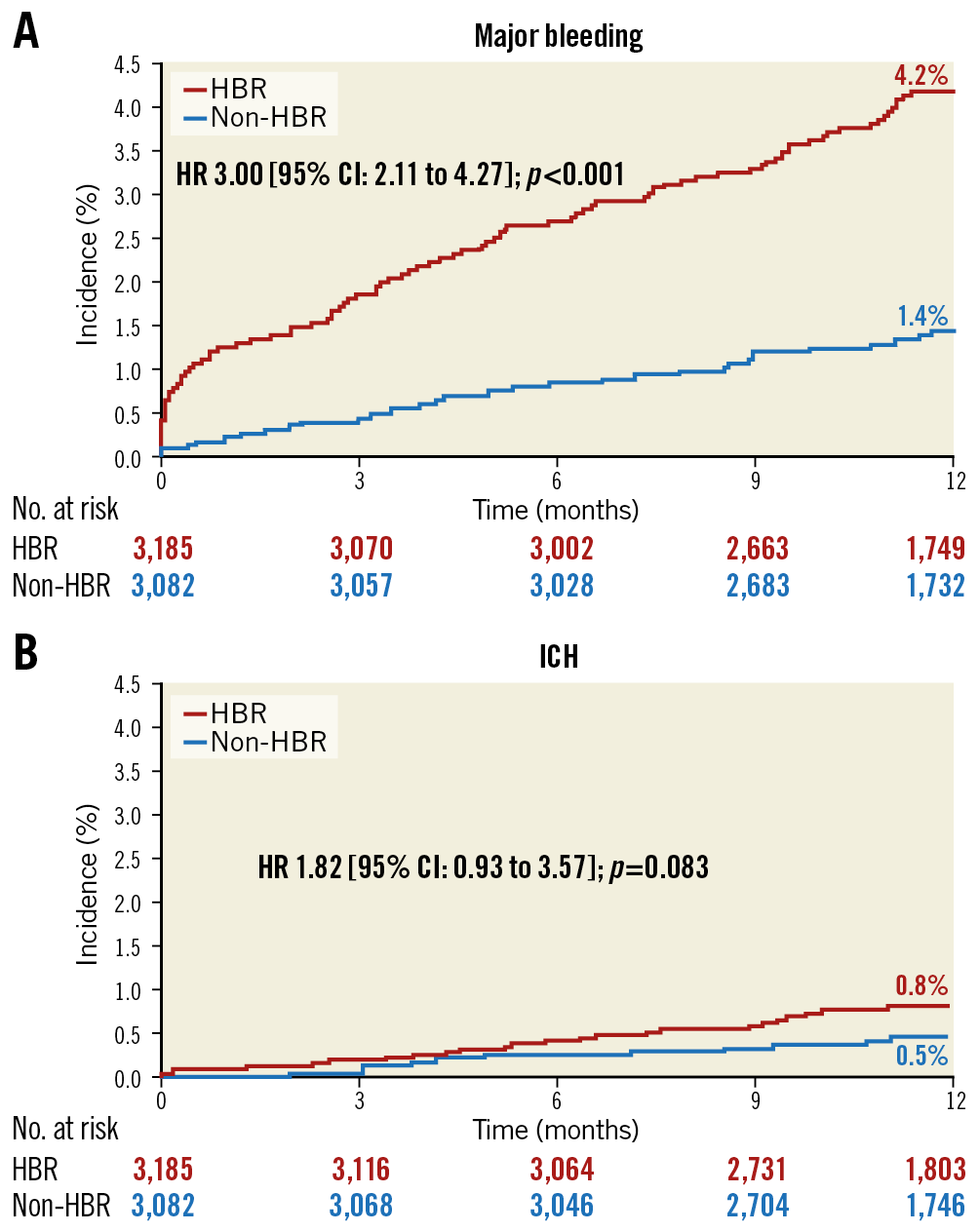 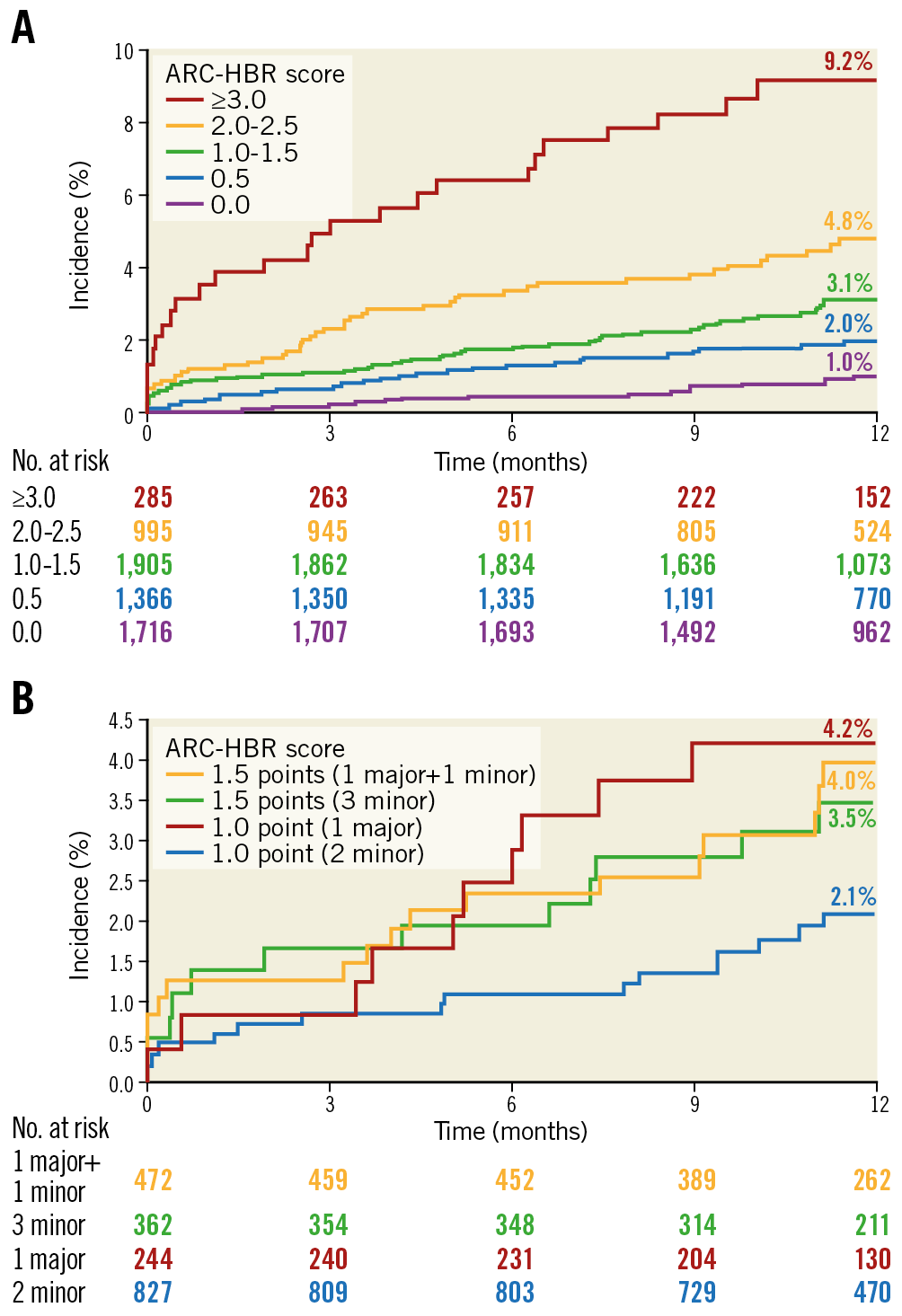 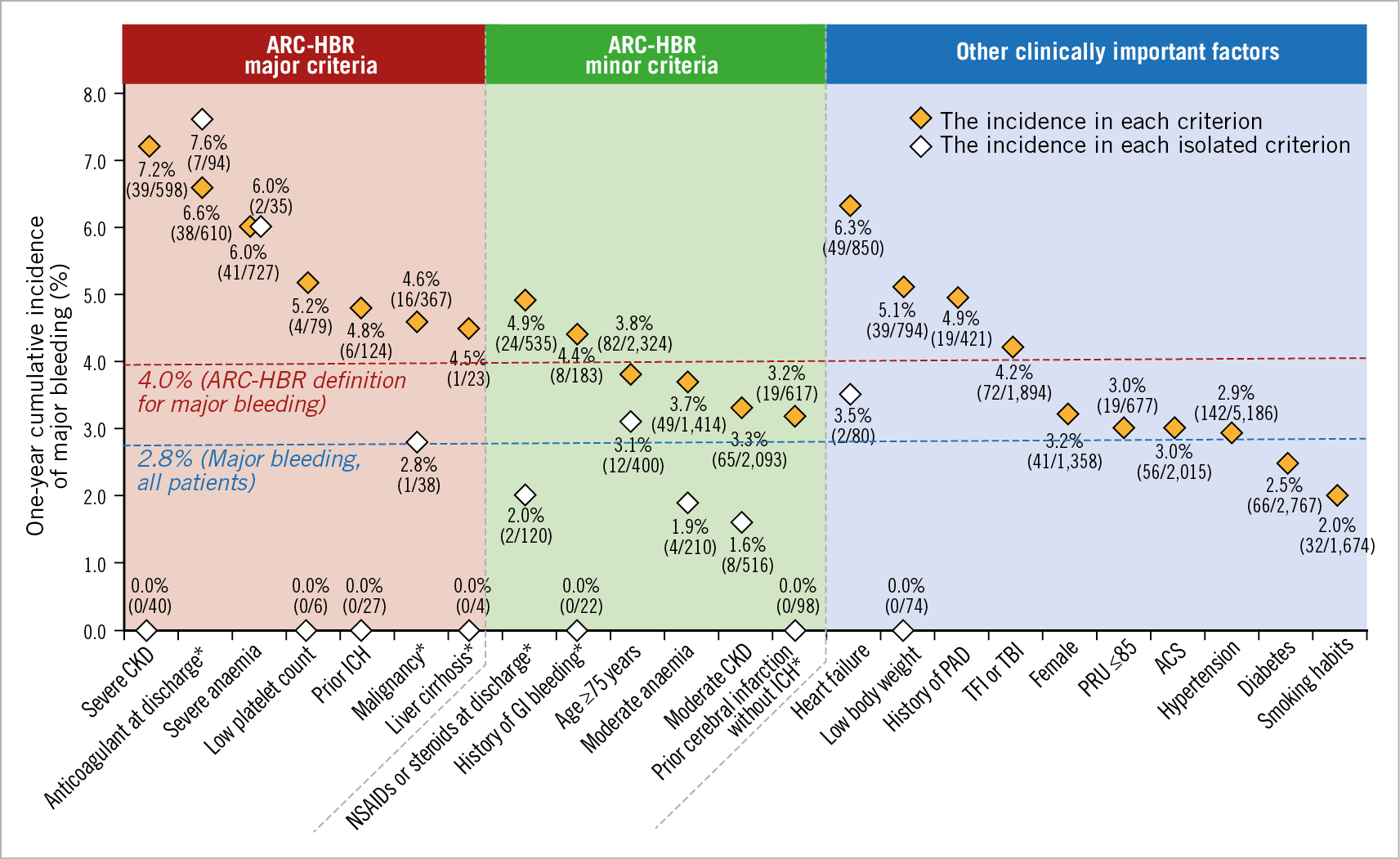 Based on the data indicating that, in addition to the ARC-HBR criteria, low body weight, heart failure, peripheral arterial disease, and non-radial approach were also associated with an incidence of major bleeding of ≥4%, univariate and multivariate analyses were used to calculate statistically significant independent predictors of major bleeding events (Table 2). 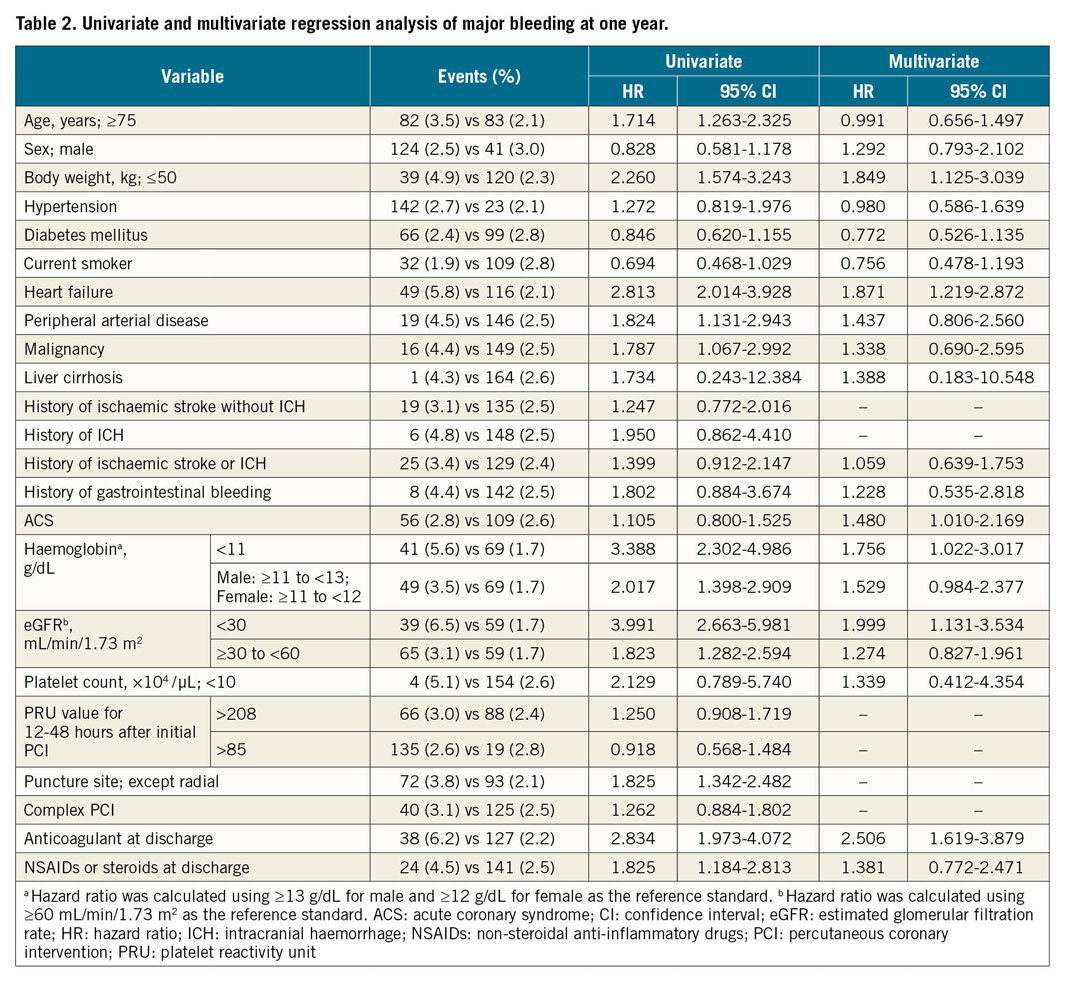 This study was the first to investigate the suitability of ARC-HBR in >6,000 Japanese patients receiving second-generation DES and enrolled in the PENDULUM real-world registry. The main findings of this study are the following: (i) approximately 50% of the Japanese patients who underwent PCI were classified as ARC-HBR patients, and the majority of HBR patients had overlapping criteria; (ii) the ARC-HBR criteria were suitable for Japanese patients in the contemporary PCI era, where patients are commonly managed with strategies such as lower doses of antiplatelet drugs6, a transradial PCI approach9, and use of PPIs; (iii) the multivariate regression analysis suggested that low body weight and heart failure are predictive factors for high bleeding risk but C-indices were not improved.

Ueki et al recently reported that approximately 40% of patients from the Bern Registry fulfilled the ARC-HBR criteria10. In the present study, 50.8% of patients (3,185/6,267) were found to have HBR. In previous reports, the proportion of HBR patients in Japan has been reported to be 43%11. Taken together, it can be assumed that the incidence of HBR is approximately 50% in Japanese daily practice. Patient characteristics were similar between our study and those in the Bern Registry; however, the proportion of patients with overlapping bleeding risk criteria was higher in our study than in the Bern Registry. Only 244 (3.9%) patients had a single major ARC-HBR criterion even though the prevalence of HBR was 51% in this study. Of 4,781 HBR patients, 799 (16.7%) had a single major ARC-HBR criterion in the Bern Registry10. This may suggest that Japanese patients are more likely to have overlapping risk factors. The elucidation of the real impact of each minor criterion warrants further study.

The incidence of major bleeding in our study was lower than that in previous studies. In the Bern Registry, the risk of BARC 3 or 5 bleeding was 6.4% in the HBR group and 1.9% in the non-HBR group10, and in the CREDO-Kyoto registry cohort-211 the risk of major bleeding was 10.4% versus 3.4%, respectively. There are several explanations as to why these differences might be possible. Firstly, the difference in patient demographics should be considered. It is well known that the incidence of major bleeding is higher in acute coronary syndrome patients. In the present study, the proportion of acute coronary syndrome patients was limited to almost 30% compared with almost 50% in the Bern Registry study. In addition, IIb/IIIa antagonist treatment is not available in Japan and the approved doses of antiplatelet regimens in Japan differ from those in other countries. Secondly, technical advances coupled with the improvement of medical management might contribute to the reduction of bleeding risk. It should be noted that the CREDO-Kyoto registry cohort-2 is almost 10 years old, and the procedures and medications used11,12 were different from those used in the present study. Additionally, the hazard risk of bleeding in HBR patients compared to non-HBR patients (three times higher) was in line with the CREDO-Kyoto registry cohort-2 and the Bern Registry.

A history of heart failure has been reported as an independent predictor of bleeding in the PENDULUM registry and CREDO-Kyoto registry cohort-27,11. This is likely to be related to the higher mean ages of enrolled patients in the PENDULUM registry and in the CREDO-Kyoto registry cohort-2 (70.0 and 68.2 years, respectively)7,11, compared with other registries discussed in the original ARC-HBR paper1. However, as our results are based on a post hoc analysis, the findings should be interpreted with caution. Indeed, most cases that met an isolated criterion did not demonstrate an incidence of major bleeding >4% and the cumulative incidence of major bleeding was similar. Furthermore, C-statistics did not improve with the addition of these factors. Further studies are warranted to assess the clinical impact of these factors in predicting major bleeding.

When comparing the HBR and non-HBR groups, there was a statistically significant difference in DAPT duration. Whether antiplatelet drug de-escalation is effective in reducing bleeding would require hypothetical testing. Even in patients with HBR, DAPT was used in 70% of patients after 12 months, and bleeding events were observed frequently. This strongly suggests that there is room for improvement.

This analysis has some limitations. First, the post hoc nature of the analysis means that not all variables from the original ARC-HBR definitions were collected, and we were unable to address some criteria (e.g., chronic bleeding diathesis and recent major surgery or major trauma within 30 days prior to PCI). The differences in the original ARC-HBR criteria and the modified version used in our analysis mean that the data from our study may not be directly comparable to other publications assessing HBR, limiting their clinical utility. Importantly, many of the ARC-HBR criteria were not available or were markedly modified, including our definition of gastrointestinal bleeding, which did not include hospitalisations or transfusion treatment. The incidence of bleeding was >4% in patients with prior gastrointestinal bleeding; therefore, it was included as a minor criterion in our study. Second, selection bias was inevitable, because this study was an observational study and not all patients undergoing PCI at each institution could be enrolled. Third, ARC-HBR defined major bleeding incidence as ≥4%; however, because East Asian and Western patients are reported to have different risk profiles for bleeding and thrombosis5, 4% may not be a suitable cut-off for Japanese patients. This requires further study. Fourth, all patients enrolled in this study were Japanese and, thus, the results may not be completely generalisable to other East Asian populations. Fifth, we did not use a quantitative description for heart failure in our study (e.g., ejection fraction). Instead, we defined heart failure based on hospitalisation or having a treatment history. Finally, the present study focused on the risk of bleeding in Japanese patients and did not assess the risk of cardiovascular events or mortality, although we can assume that such risks are also increased in patients with HBR. Further analysis is needed to understand and manage these additional clinical risks in HBR patients.