Conclusions: At five-year follow-up, the Nobori stent with a biodegradable polymer coating provided a similar safety and efficacy profile when compared to the durable polymer first-generation CYPHER stent.

SORT OUT: Scandinavian Organization for Randomized Trials with Clinical Outcome

The controlled release of antiproliferative drugs from coronary stents significantly reduced the risk of restenosis and the need for repeat revascularisation compared to bare metal stents1. However, first-generation drug-eluting stents (DES) with durable polymers have presented an increased risk of stent thrombosis (ST), especially very late ST after discontinuation of dual antiplatelet therapy2. Incomplete endothelialisation of the stent struts and positive vessel remodelling due to vessel wall inflammation were considered to be causal factors, probably triggered by the persisting polymer material of first-generation DES3. Biodegradable polymer DES were developed to overcome this problem by providing controlled drug release combined with degradation of the polymer. The biolimus-eluting Nobori® stent (Terumo Corp., Tokyo, Japan) was designed with a biodegradable polymer applied to the abluminal surface of the stent. After implantation and drug elution, the polymer is metabolised to water and carbon dioxide within nine months4.

The SORT OUT (Scandinavian Organization for Randomized Trials with Clinical Outcome) V trial failed to demonstrate non-inferiority of the Nobori as compared to the CYPHER® stent (Cordis, Cardinal Health, Milpitas, CA, USA) in the composite safety and efficacy endpoint and in occurrence of definite ST at nine-month follow-up5. In this study, we present five-year clinical outcomes.

The SORT OUT V study protocol has been described previously5. Briefly, SORT OUT V is a multicentre, open-label, all-comers study comparing the biolimus-eluting Nobori stent to the sirolimus-eluting CYPHER stent in treating coronary artery stenoses. Eligible patients were at least 18 years old, had chronic stable coronary artery disease or acute coronary syndromes, and at least one coronary artery lesion with more than 50% diameter stenosis requiring treatment with a DES. No restrictions were placed on the number of treated lesions, number of treated vessels, or lesion length. Exclusion criteria were less than one-year life expectancy; allergy to aspirin, clopidogrel, prasugrel, sirolimus, or biolimus; participation in another randomised trial; inability to tolerate dual antiplatelet treatment for 12 months; or inability to provide written informed consent. The study complied with the Declaration of Helsinki and was approved by the local ethics committee. All patients provided written informed consent for trial participation. Before implantation, patients received at least 75 mg of aspirin, a 600 mg loading dose of clopidogrel, and an unfractionated heparin dose (5,000 IU or 70-100 IU/kg). The recommended post-procedure dual antiplatelet regimen was 75 mg aspirin daily lifelong and clopidogrel 75 mg for one year.

Patients were enrolled by the investigators and randomly allocated to the treatment groups after diagnostic coronary angiography and before percutaneous coronary intervention. Block randomisation by centre was used to assign patients in a 1:1 ratio to receive the Nobori or the CYPHER stent. An independent organisation computer-generated the allocation sequence, stratified by gender, and presence of diabetes or ST-segment elevation myocardial infarction. Patients were assigned to treatment through an automated telephone allocation service. While operators were not blinded, all individuals analysing data were masked to treatment assignment.

We used clinically driven event detection based on national Danish registry data to avoid study-induced reinterventions5,7. An independent events committee, masked to treatment group assignment during the adjudication process, reviewed all endpoints and source documents to adjudicate causes of death, reasons for hospital admission, and diagnosis of myocardial infarction. Two dedicated percutaneous coronary intervention operators at each participating centre reviewed cine films for the event committee to classify ST and target vessel revascularisation (either with percutaneous coronary intervention or with coronary artery bypass grafting). In cases of different interpretations, the angiograms were re-evaluated to obtain consensus.

The trial was powered for assessing non-inferiority of the Nobori stent to the CYPHER stent with respect to the primary endpoint. Follow-up began on the date of the index percutaneous coronary intervention procedure. In analyses of each outcome, follow-up continued until the date of an endpoint event, death, emigration, or until five years after implantation, whichever occurred first. We constructed cumulative incidence curves for each endpoint, taking into account death as a competing risk. Additionally, we carried out landmark analyses to assess outcomes at one year and between one year and five years. Multiplicative interaction between subgroup and stent type was calculated with Wald statistics. We estimated differences between groups by calculating odds ratios. Patients who received the CYPHER stent were used as the reference group in the analyses. Odds ratios were calculated for MACE at five-year follow-up for pre-specified patient subgroups. All analyses were performed by intention to treat. We used SAS software, version 9.4 (SAS Institute, Cary, NC, USA) for all analyses. 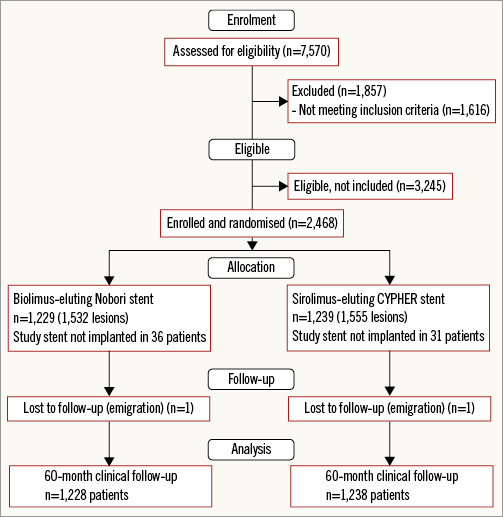 Figure 1. Trial profile of the SORT OUT V trial.

Baseline demographic and clinical characteristics in the two study groups are shown in Table 1. Overall, the treatment groups were well matched, but there were more patients with previous coronary artery bypass grafting in the Nobori stent group. 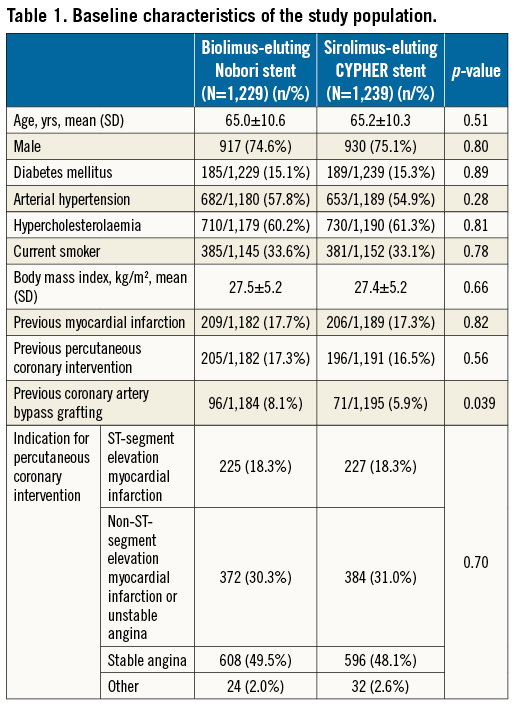 Table 2 presents the five-year clinical outcomes and the landmark analyses of events occurring within and after year 1. The Figures illustrate these outcomes and analyses for MACE (Figure 2), cardiac death (Figure 3), myocardial infarction (Figure 4), TVR (Figure 5), and definite ST (Figure 6). At five-year follow-up, clinical outcomes did not differ significantly between patients who received Nobori and those who received CYPHER stents (Table 2). Patients in the Nobori stent group had higher MACE rates within the first year (OR 1.23, 95% CI: 0.85-1.79; p=0.27) and lower rates beyond the first year (OR 0.82, 95% CI: 0.63-1.07; p=0.14). Findings for MACE rates were consistent across pre-specified subgroups (Figure 7).

Figure 2. Major adverse cardiac events in the SORT OUT V trial. A) Event rates of major adverse cardiac events (cardiac death, myocardial infarction, definite stent thrombosis and target vessel revascularisation) in the biolimus-eluting stent and sirolimus-eluting stent groups. B) Landmark analysis discriminating between events occurring before and after one year of follow-up. OR: odds ratio 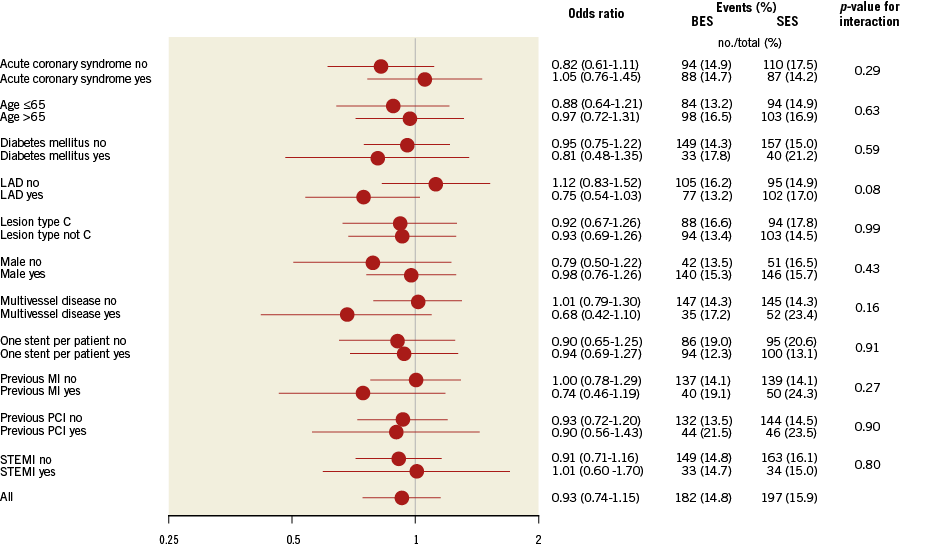 During the first year the Nobori stent group had a 0.8% definite ST rate. Recently, in the SORT OUT VII trial, we also found a higher one-year risk of definite ST in Nobori-treated patients (1.2%) compared to the biodegradable polymer sirolimus-eluting Orsiro stent (0.4%) (Biotronik, Berlin, Germany)8. The COMPARE II trial found similar numerically higher definite ST in 0.7% in the Nobori group compared to the durable polymer-coated everolimus-eluting stent group (0.4%) at one year9, as did the NEXT trial (0.25% in the Nobori arm compared to 0.06% in everolimus-eluting stents at one year)10. The Long Drug-Eluting Stent (LONG-DES) trial compared the Nobori and the durable polymer-based platinum-chromium everolimus-eluting stent (PtCr-EES) in patients with long (≥25 mm) lesions, and found 0.8% definite ST in the Nobori arm and none in the PtCr-EES arm11. Thus, Nobori stent treatment was associated with higher risk of ST during the first year in all these trials. The biodegradable polymer biolimus-eluting BioMatrix Flex™ stent (Biosensors Interventional Technologies Pte Ltd., Singapore) has similarities to the Nobori stent. Both stents are made of the same stainless steel alloy, have a strut thickness of 112 μm, are coated with the same biodegradable polymer and both elute biolimus A9. However, the Nobori stent utilises an ultra-thin non-degradable parylene-C coating between the struts and the polymer to assure polymer attachment, and the stents are mounted on different balloons and delivery catheters. The BioMatrix Flex showed fewer cases of definite ST during the first year compared to the comparator stent in LEADERS12,13 and in SORT OUT VI14. The reason for this difference in outcome is not clear but could be due to differences in the coating as well as differences in the balloon delivery systems. The studies further suggest that it cannot be justified to consider the Nobori and BioMatrix Flex the same stent as they were in the network meta-analyses15,16.

From one to five years we observed a very late ST rate of 0.27%/year (13 of 1,192) in the Nobori group, a rate almost similar to the NEXT and the COMPARE II trials17. The rate is slightly higher than reported for the BioMatrix Flex stent in LEADERS18 (0.16%/year, five of 804), but similar to the SORT OUT VI trial from year 1 to year 3 (0.33%/year, 10 of 1,497)19. Thus, the present data do not support that the permanent parylene-C coating gives rise to a higher risk of very late ST5. The very late ST rate with permanent polymer zotarolimus-eluting stents in SORT OUT III20 was only 0.02%/year (one of 1,162) and only 0.05%/year (three of 1,390) with the durable polymer-coated everolimus-eluting stent21. Therefore, in the SORT OUT trials, the thin-strut permanent polymer second-generation stents had lower risk of very late ST compared to both first-generation permanent polymer DES and third-generation stainless steel thick-strut biodegradable polymer stents. Further support for protection against ST by the use of thin-strut permanent polymer stents compared to a bare metal platform comes from the NORSTENT trial (The Norwegian Coronary Stent Trial)22. After six years, definite ST occurred in 0.8% in the DES arm (96% second-generation) compared to 1.2% in the bare metal stent arm (p<0.05).

All SORT OUT trials used the “registry-based randomised clinical trial design”5,7. Advantages include a reduction in cost because of the use of established registries and very high follow-up rates. Furthermore, it provides event rates in real-life patients whereas patients included in trials with routine follow-up may have more reinterventions. Although the Danish healthcare databases capture events for patients seeking medical attention, these records might underestimate event rates. Revascularisation is, however, registered in two registries, the Danish National Registry of Patients and the Western Denmark Heart Registry, and it is therefore unlikely that revascularisations can occur without being captured. A myocardial infarction can be missed if a misclassification of the diagnosis code occurs in a patient file (classified with a non-cardiac diagnosis) and consequently misreported in the Danish National Registry of Patients. However, all myocardial infarctions leading to angiography will be captured in the Western Denmark Heart Registry. Silent myocardial infarctions not leading to hospital admission will not be captured in our design in contrast to a conventional design where follow-up ECGs are required. A minor underestimation of myocardial infarctions should, however, not lead to bias on the differences detected between treatment groups, and the negligible loss to follow-up in the SORT OUT design probably compensates for this potential underestimation of myocardial infarctions.

The SORT OUT design has other limitations. Data for the duration of dual antiplatelet therapy are not collected. However, all patients were recommended to receive 12 months of dual antiplatelet therapy, and all patients received reimbursement of costs. We used broad inclusion criteria to include routine clinical care patients, but SORT OUT V included only 43% of eligible patients. This was mainly caused by some operators not being willing to include patients, whereas other operators included 80% of patients. A significant proportion of eligible ST-segment elevation myocardial infarction patients was not included and this raises concerns on external validity. Still, we found no interaction between ST-segment elevation myocardial infarction and stent group. It should be noted that we found very low rates of adverse outcomes, including very late stent thrombosis, for the CYPHER stent compared to some other trials (1.5% vs. 5.2% in LEADERS18). The better than expected performance of the CYPHER stent could be due to some difference in the study populations because of the low inclusion rate mentioned above.

We are thankful to Helle Bargsteen for her efficient help with all aspects of the trial.

This work was supported by equal unrestricted grants from Terumo and Cordis, Johnson & Johnson.