Letter to the editor

Coronary wedge pressure and collateral flow contribution: not a dichotomy!

We read with great interest the report by Akdeniz et al1, evaluating the impact of percutaneous coronary intervention (PCI) on distal microvascular resistance in patients presenting with non-ST-segment elevation myocardial infarction. The authors are to be congratulated for their extensive effort on this timely topic, since microvascular resistance is increasingly recognised as an important element in the diagnosis and prognosis of acute coronary syndromes2,3.

However, since, similar to epicardial coronary arteries4, microvascular resistance vessels without tone are known to be pressure-distensible, the finding that hyperaemic microvascular resistance increases upon revascularisation contradicts basic coronary physiological principles5, and may well be explained by the methodology applied by the authors. 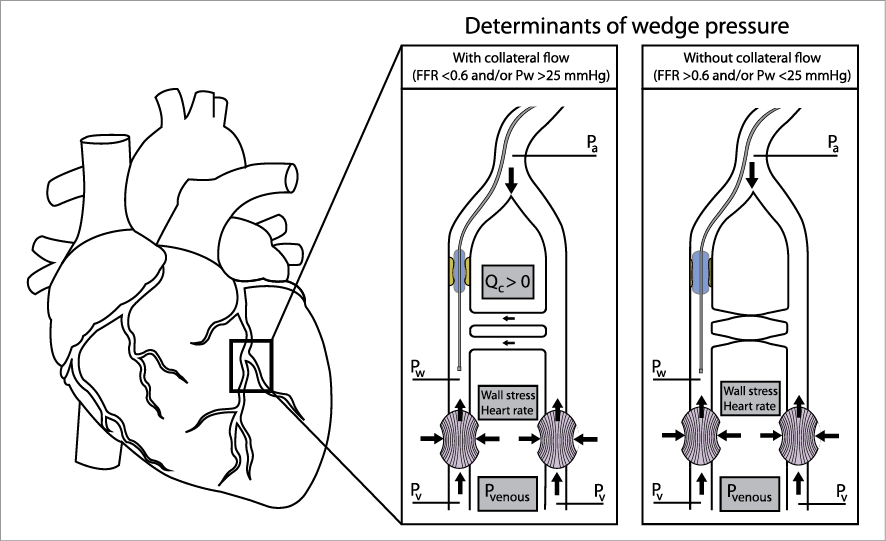 Although the report by Akdeniz et al illustrates the importance of further investigation on this subject, such investigations should apply a consistent methodology that does not iatrogenically obscure the results and lead to conclusions that are physiologically implausible. Considering the limitations of paramount magnitude associated with the use of coronary wedge pressure as an exclusive measure of collateral flow contribution, we would suggest calculating microvascular resistance without correction for assumed collateral flow, and re-evaluating the findings from a physiological perspective.

We thank Dr van Lavieren and colleagues for their interest in our work and for their precious comments. Dr van Lavieren highlights some of the potential limitations of our approach and focuses mainly on the way in which microvascular resistance was calculated in our study1. As they very appropriately point out, there is a lively debate going on about the accurate calculation of the microvascular resistance (MR) by using intracoronary pressure and flow measurements in the presence of epicardial stenosis. It can generally be accepted that the assumed contribution of collateral flow should be accounted for and thus coronary wedge pressure (CWP)-based correction for collaterals should be performed when assessing microvascular resistance in the presence of flow-limiting epicardial stenosis (FFR <0.80)2. On the other hand, there are some inherent limitations in performing CWP-based correction. We agree that the magnitude of CWP not only reflects collateral flow but is also affected by the chronotropic and inotropic properties of the heart3. The potential contribution of collateral flow is probably overestimated by incorporating CWP, particularly in patients with elevated wall stress (such as left ventricular hypertrophy). However, these factors produce a rather small effect on CWP in non-hypertrophied (normal) hearts3. In particular, CWP is most probably determined by collateral flow when it is above a threshold of 25 mmHg4, as the authors point out. In our patient population, while the mean value was reported as 30.5 mmHg, CWP values were above 25 mmHg in 27 of the individual cases (71%). Although the author states that the collateral flow contribution was shown to be negligible distal to the stenosis with an FFR >0.6, it is elegantly reported by the same group in a recent study that there is 16.5+10% overestimation in corrected MR for stenosis with FFR between 0.6 and 0.85. Furthermore, Yong et al2 demonstrated that corrected MR, which incorporated collateral flow, would be routinely overestimated to some extent by the uncorrected MR when the FFR value was below 0.80. In this latter report2, there was almost no difference between corrected and uncorrected MR values when FFR was >0.80. In our study population, there were 13 patients with FFR <0.60, 22 with FFR between 0.60 and 0.80, and only three patients with an FFR value above 0.80. Accordingly, we thought that, before PCI, correction of MR for collaterals by incorporating CWP into the simple formula would be appropriate. Furthermore, besides the haemodynamic significance of epicardial stenosis, it is also known that many factors may affect the magnitude of collateral formation which may contribute to the wide range of CWP values which might be found in patients with an FFR value between 0.60 and 0.80. Therefore, it seems reasonable to us that incorporation of CWP while calculating MR would be appropriate in the presence of haemodynamically significant stenosis (FFR <0.80).

Another important issue raised by the authors concerns the methodology we used in the calculation of MR before (in the presence of haemodynamically significant stenosis) and after PCI (after removal of epicardial stenosis). While we took into account collateral contribution as assessed by CWP in the presence of epicardial stenosis, we did not make correction for collateral flow after PCI with the assumption that establishing antegrade flow by removal of epicardial stenosis would abolish the contribution of collaterals. In a recent paper6 which showed no effect of PCI on MR in patients with stable angina undergoing PCI, while pre-PCI MR had been calculated with incorporation of CWP, after PCI no correction for collaterals was performed with the same assumption. In that paper, there was also no difference between mean post-PCI MR values calculated with or without CWP-based correction. The most probable reason for indifferent MR values found (corrected or uncorrected) at pre- and post-PCI phases could be the exclusion from that analysis of the patients who developed post-PCI myonecrosis6. However, when patients with periprocedural myonecrosis were not excluded from the trials, significant increases in mean post-PCI MR when compared to pre-PCI MR were clearly demonstrated7,8. These results are, indeed, in line with our paper in which we showed a significant increase in mean post-PCI MR in patients with non-ST-elevation acute coronary syndrome who developed periprocedural myocardial infarction after PCI.

It is known that post-PCI high MR values are related to higher troponin release and indicative of microvascular injury and loss of capillary integrity8-10 that is most probably caused by plaque disruption and distal embolisation following PCI. Accordingly, marked plaque burden reduction achieved by stent deployment in patients with unstable lesions most likely results in embolisation of plaque contents, which could help to explain our finding that MR increases upon revascularisation of unstable plaques in patients with non-ST-elevation acute coronary syndrome who develop myonecrosis after PCI.

Invasive measurement of microvascular resistance is increasingly recognised as an indispensable tool for interrogating coronary microcirculation. Especially after its prognostic importance became apparent in acute coronary syndrome settings, resolving the continuing controversy in its calculation and applying a consistent methodology across investigations has become more important.

The author has no conflicts of interest to declare.