A 68-year-old patient presented a long, type C coronary dissection after balloon angioplasty of a focal lesion in a distal marginal branch. Due to the small vessel size the dissection was left untreated. At angiographic follow-up the dissection had completely disappeared, but a localised restenosis was found in the proximal vessel. Optical coherence tomography (OCT) confirmed the complete healing of the dissection and revealed a normal vessel wall (restitutio ad integrum). This technique also provided unique insights into the underlying substrate of the proximal restenosis unravelling a complicated plaque with associated thrombus.

A 68-year-old man was admitted for unstable angina. He had a previous history of hypertension, hyperlipidaemia and cigarette smoking. The electrocardiogram showed sinus rhythm with negative T waves on the inferior leads. Coronary angiography revealed mild irregularities on the left anterior descending coronary artery and a 50% lumen diameter stenosis in the mid right coronary artery. The left circumflex coronary artery was a large vessel, and showed a highly eccentric and severe lesion (90% lumen diameter stenosis) in its proximal segment and another severe lesion (90% lumen diameter) distally located at the ostium of a small marginal branch (Figure 1A). Left ventricular systolic function was normal (left ventricular ejection fraction: 70%) and no wall motion abnormalities were detected. A bare metal stent (Driver 3x15mm; Medtronic, Minneapolis, MN, USA) was implanted in the proximal circumflex coronary artery with excellent result. Then the ostium of the marginal branch was dilated with a 2mm balloon at 14 atmospheres. Acomplex image of coronary dissection (Type C) was induced in this vessel for a total length of 15mm. Additional low-pressure prolonged balloon inflations failed to improve the dissection image. On quantitative angiography (Medis System; MEDIS, Leiden, The Netherlands), the distal reference vessel of this branch improved after intervention from 1.4mm to 2.1mm. Eventually, it was decided not to implant a stent due to the small vessel size and the presence of a TIMI 3 coronary flow (Figure 1B). The clinical course was uneventful and no enzymatic rise was detected. 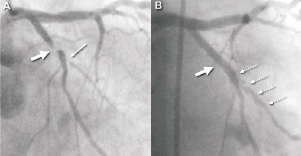 Figure 1. A) Severe lesion in the proximal circumflex coronary artery (arrow) and in the origin of a small marginal branch (small arrow). B) The proximal lesion obtained a good angiographic appearance after stent implantation (arrow), but a large type C dissection was induced in the marginal branch after balloon dilation (small broken arrows).

Six-month later the patient was admitted again after two episodes of prolonged chest pain at rest with a mild elevation of troponin I levels (0.10 ng/ml) but without significant electrocardiographic changes. A new coronary angiogram revealed similar lesions in the left anterior descending and right coronary arteries. The stent implanted on the circumflex coronary artery had an excellent angiographic appearance (20% lumen diameter stenosis) but a focal, severe, restenosis (90% lumen narrowing) was located at the ostium of the obtuse marginal branch (Figure 2). However, the rest of this vessel was normal with complete disappearance of the angiographic image of dissection. OCT (Image Wire, M3, Light Lab Imaging, Inc, Westford, MA, USA) showed a well expanded stent with fully apposed struts against the vessel wall and mild neointimal proliferation (Figure 2A). However, the ostium of the marginal branch presented a severe stenosis (minimal lumen area of only 0.5mm2) with a ruptured fibrotic plaque that was associated with a platelet rich thrombus (without light shadowing) slightly protruding into the lumen (Figure 2B). Of interest, the marginal branch showed a completely normal vessel wall appearance, without any suggestion of coronary dissection or endothelial disruption (Figure 2C). The focal restenosis was dilated with a 2.5mm balloon (prolonged inflations at low –10 atmospheres– pressure) with a good angiographic result and without any residual dissection visible on angiography. On quantitative angiography, the reference vessel of this marginal branch improved from 2.3mm to 2.6mm. After the procedure, OCT was repeated and showed a significant lumen improvement (minimal lumen area 3.5mm2) at the ostium of the marginal branch and several mild, angiographically silent, coronary wall dissections (Figure 3B). The possibility of stent implantation, to further improve lumen area at the ostium of the vessel, was considered but this option was eventually disregarded again taken into consideration the excellent angiographic and OCT results and also that the stent would necessarily jail the circumflex branch. The patient had an uneventful clinical course and at 1-year clinical follow-up he remained completely asymptomatic. 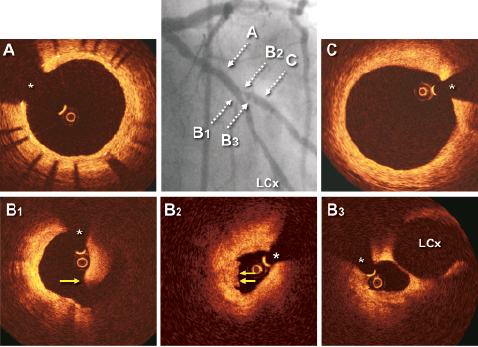 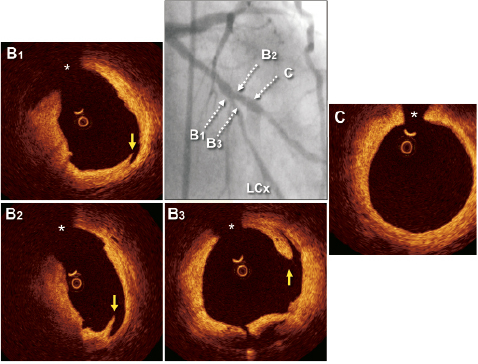 In our patient, a relatively long and complex residual angiographic coronary artery dissection completely disappeared at late angiographic follow-up. This is a relatively common finding, yet its underlying pathophysiology remains poorly understood1-5. In this case, OCT was able to confirm a complete vessel healing with the presence of a normal intimomedial layer at the previously dissected coronary segment. These findings demonstrate the ability of the coronary wall to completely recover (restitutio ad integrum) from a major vessel wall injury resulting in a coronary dissection. This explains the frequent disappearance or “sealing” of residual angiographic dissections at long-term follow-up1-5. Furthermore, in this patient, adequate flow restoration enabled a progressive increase in the reference lumen diameter of an apparently tiny vessel at first presentation, probably as the result of severe under-perfusion.

In our experience3,11, residual coronary dissections may be left untreated providing they remain stable, have a large lumen diameter and are associated with a normal coronary flow. Residual dissections appear to persist for a longer period of time after drug-eluting stent implantation4-5. Intravascular ultrasound studies have demonstrated that most residual edge-dissection (“pocket” dissections) visualised immediately after stenting are angiographically silent, and tend to disappear on intravascular ultrasound at late follow-up12. However, the resolution of this technique (150μm) is unable to detect minor disruptions or morphological changes in the vessel wall surface. Furthermore, in most cases, these intravascular ultrasound-detected edge-dissections occur at segments with significant plaque burden. Alternatively, OCT provides unique insights on vessel wall characteristics6-9. Its uniquely high axial resolution (15μm, ten times that obtained with intravascular ultrasound) allows detailed analysis of plaque composition and precise measurements of fibrous cap thickness6-9. In particular, OCT appears specially suited to visualise subtle disruptions of the vessel wall, and is more accurate than angiography to recognise small vessel dissections or intraluminal thrombus6-9. We previously demonstrated the diagnostic value of OCT in a patient with spontaneous coronary dissection10. In this challenging setting, OCT provides precise recognition of the coronary entry door, true and false lumen, and allows assessing the characteristics, location, extent and length of the dissection membrane, and appears to be of clinical value to guide subsequent therapy. OCT appears to be also of potential value in the clinical decision making process required during the treatment of “iatrogenic” coronary dissections.13

In our patient, OCT confirmed the presence of a normal vessel wall in the obtuse marginal coronary branch that previously suffered a long and complex dissection. Furthermore, OCT unexpectedly detected a complicated plaque with associated intramural thrombus at the site with a focal angiographic restenosis as well as mild, confined, dissections of the vessel wall after repeated balloon dilation. All these findings were unrecognised by angiography.

Our findings suggest that OCT provides unique insights on coronary dissections that complement angiographic findings. Our experience confirms the value of this technique to ensure complete resolution of this complication with adequate vessel wall healing and restoration of a normal vessel wall.

Moxy® drug-coated balloon: a novel device for the treatment of coronary and peripheral vascular disease