Aims: The vascular closure device (VCD) Angio-Seal is an easy-to-use system for the closure of arterial puncture sites after percutaneous coronary intervention (PCI), and allows for early mobilisation of the patient. However, little data are available about exercising early after the use of VCD’s in PCI patients.

Methods and results: A total of 230 consecutive patients were screened. Of these, 45 (20%) were excluded due to the inability to perform exercise testing, or anatomical conditions which prevented the insertion of aVCD. The 185 remaining patients (139 male, mean age 68±12 years) received Angio-Seal after PCI. After four hours, 30 patients (16%) showed a small local haematoma, 11 patients (6%) complained about minor –and one patient (0.5%) about strong– groin pain. There were no major bleeding complications, six pseudo-aneurysmata, and one arterio-venous fistula. Overall, nine patients (6%) showed moderate to severe groin problems. Patients without major complications underwent bicycle cardiopulmonary exercise testing the subsequent day. Exercise testing was performed up to 136±60 W in 176 patients (94%). Maximum workload was 104±33 W, peak oxygen consumption 17.6±5.1 ml/min/kg, and oxygen consumption at the anaerobic threshold 15.4±4.2 ml/min/kg. After exercise testing there were no cardiovascular complications noted.

Conclusions: In patients receiving VCD after PCI, exercise testing above the anaerobic threshold was feasible after Angio-Seal deployment in those patients with no complications after the use of the device.

In patients undergoing percutaneous coronary interventions (PCI), there is a rate of vascular complications of 0.8% to 5.5%1. While femoral sheaths sizes have been reduced, arterial compression and long-term dressing after PCI still bear tremendous discomfort as well as groin pain for patients. Furthermore, manual compression of the puncture site should be performed until activated clotting time is below 180 seconds2. Therefore, vascular closure devices (VCD) were developed to reduce access site bleedings, to improve patients’ comfort and to accelerate ambulation after PCI. Different closure techniques are applied: The passive and delayed closure method support manual compression with assistance or enhancement (patches), whereas active systems are either collagen based with or without anchor and suture, suture based, or staple/clip mediated systems3.

The haemostatic puncture closure device Angio-Seal (St. Jude Medical, St. Paul, MN, USA) is a quick and easy-to-use system. The impact on access site complications after the use of VCD following early exercise testing remains unclear so far. Therefore, the aim of this study was to evaluate the safety and reliability of VCD Angio-Seal during exercise testing early after patients received PCI.

Patients with common contraindications for Angio-Seal device deployment including severe calcifications of the vessel site, severe peripheral artery disease, puncture in the origin of the femoral profunda artery and marked obesity were excluded from the study3. Clinical exclusion criteria were an emergency intervention, and patients on continuous medication with oral anticoagulants.

All patients were loaded with clopidogrel 300mg, followed by amaintenance dose of 75mg prior to the intervention.

After insertion of a 6 or 8Fr sheath, unfractionated heparin was given until an activated clotting time-level (ACT) of 250s was achieved. Then, patients received PCI according to standard protocols8. After this procedure, an angiography of the accessed femoral artery was performed to rule out major risk factors for retroperitoneal haemorrhage, relevant peripheral stenoses of the common or the superficial femoral artery, or if the puncture site was located in the bifurcation of the profundal femoral artery9. In addition, this method identified patients with non-femoral artery sheath insertion for which the VCD utilisation was not proven10. Patients with strong tortuosity and/or calcification of the femoral arteries were excluded from the study. 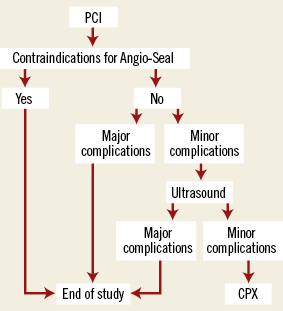 Angio-Seal was implanted when ACT was <300s after the end of the coronary procedure. In patients with more of this cut-off, protamine was used.

The Angio-Seal system is a collagen-anchor-suture mediated device, which is now available in the third generation. The placement of the Angio-Seal System was performed using the manufacturer’s recommended technique.

After insertion of the VCD, a circular groin dressing was applied and patients were immobilised for four hours. After this, the arterial puncture site was examined, and auscultation was performed. If there were no relevant complications, ambulation was initiated. Anticoagulation, either with unfractionated heparin or low molecular weight heparin, was restarted six hours after resolvement of the dressing. On the subsequent day, ultrasound and Doppler spectral analysis of the puncture site was performed in all patients.

Pain was categorised according to the Borg scale, with minor pain defined as Borg <5 and major pain as Borg ≥513.

Patients with no relevant complications as assessed by physical exam and ultrasound underwent bicycle cardiopulmonary exercise testing one day after the intervention (19.7±3.9 h [11-28h]). This was performed in an upright body position using a ramp protocol with an unload of two minutes, followed by an increase of 25W/min, at least until the anaerobic threshold was reached in order to avoid further complications11. Results from exercise testing were used in order to determine the individual pulse rate to optimise further exercising. The access site was inspected during and immediately after exercise stress testing.

Demographic and procedural data were prospectively collected using a standardised procedural data sheet. This included date and type of intervention, sheath size, procedure-related drug doses and number of previous interventions. Major or minor complications, as well as the time of events were recorded. Patients who underwent exercise testing were divided into two groups: patients without and patients with minor groin complications.

For comparisons between paired data the students t-test was used. A p-value <0.05 was regarded as statistically significant.

A total of 230 consecutive patients were screened. Of these 20 were excluded due to the inability of performing exercise testing and five due to a pre-existing diagnosis of peripheral vascular disease. After performing angiography, another 20 subjects were excluded due to anatomical conditions which prevented the insertion of a VCD (in five patients due to insertion of the sheath in the origins of the profundal femoral artery, nine patients due to severe calcifications and six patients due to severe tortuosity). Of the remaining 185 subjects, 161 (87%) had stable angina pectoris (CCS class 2.1±0.9) and 24 patients (13%) acute myocardial infarction (AMI) as per definition. Acute myocardial infarction was defined as any pathological elevation of troponin-I. All these 24 patients had marginal elevations of troponinI and were eligible for exercise testing. There was no patient with ST-elevation myocardial infarction (Table1). All patients were on continuous ASA and clopidogrel medication. 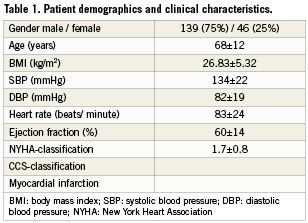 During intervention Glycoprotein IIb/IIIa-antagonists were applied in eight patients (4%).

All patients received a daily dose of 100 mg aspirin and 75mg clopidogrel.

For the angiography of the femoral artery, 11±2ml of contrast medium were used. In all patients a 6Fr device was implanted.

Immediate haemostasis was achieved in all patients with 22 patients (12%) showing a small local haematoma <5cm2. After removal of the sheaths, a light pressure dressing was applied around the puncture site to avoid cutaneous or small vessel bleeding.

The dose of LMWH on the same day and the following day in the morning was skipped.

After 4.6±0.6 hours, patients were mobilised, the dressing was removed, and the groin was inspected and auscultated. Vascular complications are listed in Table2.

None of the patients suffered periprocedural AMI, as assessed by CK-levels on day one after intervention prior to exercise testing. 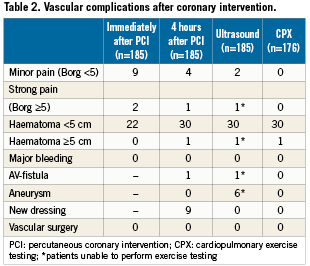 On the subsequent day, Doppler ultrasound of the puncture site was performed in all patients. Nine patients showed moderate to severe groin problems, thus only 176 patients (94%) underwent bicycle exercise-testing.

None of the nine patients not performing exercise testing received IIb/IIIa-antagonists. Of these, 2 patients had an ACT of 290 s when the sheath was removed. There were no other specific clinical signs in this patient group. Maximum heart rate was 108±24 beats per minute, maximum systolic blood pressure was 163±33mmHg and maximum diastolic blood pressure 80±17mmHg. 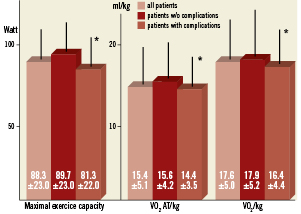 We studied the effects of exercise testing after deployment of the vascular closure device Angio-Seal following PCI in 185 patients. The major finding of our study was that exercise testing was feasible, even early after closure-device deployment, and could be performed safely and effectively without an increased complication rate in a selected population of patients, that had been first studied with vascular ultrasound.

Achieving adequate haemostasis is crucial for the prevention of access site complications in patients undergoing PCI3. The occurrence of vascular complications was an independent predictor of non-fatal myocardial infarction or death within one year after intervention14, and has been associated with a significant increase in mortality15. Advanced age, female gender, pre-existing vascular disease, emergent procedures, low body surface area4,8,14, diabetes, hypertension, and cigarette smoking15,16 are also associated with an increased bleeding risk.

Since the introduction of vascular closure devices, a reduction in bleeding complications and an increase in safety and effectiveness has been reported for the management of arterial access sites3,4,6,17. The immediate success rate has been estimated >95% after the use of collagen plug closure devices3.

In our study, Angio-Seal was deployed successfully in all patients. Vascular complications were seen in eight patients (4.3%), with large haematoma and AV-fistula in one patient each, and false aneurysms in six patients. This complication rate was in the range of other studies. Chevalier et al observed a complication rate of 5.9% in 306 high risk patients18. In a meta-analysis of 12,937 patients undergoing either manual compression or vascular closure, Arora et al reported complication rates of 2.4% after PCI and vascular closure with different devices6.

In a head to head comparison of 200 patients receiving a VCD or manual compression, Martin et al reported the lowest time to ambulation using Angio-Seal as compared to other systems or manual compression21. Recently Deuling et al prospectively compared Angio-Seal, StarClose (Abbot, Abbott Park, IL, USA), and manual compression regarding the efficacy of haemostasis, complication rates and safety of early ambulation. Since there was a significant decrease in immobilisation time with VCD, they concluded that early ambulation in patients after usage of vascular closure devices was safe22. Two recently published articles, which examined the safety and effectiveness of newer devices, showed similar results23,24. However, none of these studies tested early exercise after PCI.

There are some limitations of this study that need to be mentioned. First, there was no control group with early exercise testing after manual compression, since there were major concerns about bleeding complications in these patients. Secondly, our data represent results of a single centre study, with restrictions to patient selection for device deployment. Thirdly, our study was limited to acute data acquisition without long-term follow-up. Finally, we performed Doppler ultrasound before early exercise testing in our patients. Although this created additional costs and does not necessarily reflect clinical practice, Doppler ultrasound has been introduced as regular safety net to exclude relevant groin complications in our department.

Our findings showed that exercise testing above the anaerobic threshold early after Angio-Seal deployment in PCI patients was feasible without relevant vascular complications in a population of selected patients that has been studied first with vascular ultrasound. Angio-Seal appeared to be safe, with a low incidence of bleeding and a high safety profile confirmed by Doppler ultrasound examination. Therefore, Angio-Seal could be used in patients who should be mobilised and exposed to physical activation early after coronary interventions.

The authors have no conflict of interest to declare.