Methods and results: We analysed 141 unselected patients with unprotected LMCA stenosis: 72 were treated with SES and 69 with BMS. SES patients were younger, with a higher ejection fraction, had more often hypertension, family history and were more often smokers. The procedural success rate was 94.2% in SES group and 87% in BMS group. In SES group there were 2 periprocedural myocardial infarction (3%). 1 intra-procedural death (1.4%) and 1 in-hospital death (1.4%) and respectively 2 (3%),4 (6%) and 3 (4%) in BMS group. No incidents of stent thrombosis, stroke and emergent CABG occurred during hospitalisation in either group. SES patients showed a lower late lumen loss (0.5±0.8 mm vs 1.1±1.0 mm; p<0.05) and a lower nine-month angiographic restenosis rate (13.6% vs 24.3%; p=NS). The MACE free survival rate at 2 years was 83% in the SES group vs 55% in the BMS group (p<0.001).

Lesions in the LM are still considered a standard indication for surgical revascularisation1-3, unless several studies have demonstrated the safety and feasibility of unprotected LMCA intervention using BMS4-22. In effect the main limit of this approach is the in-stent restenosis (ISR), often associated with an increase of long-term mortality19. Recently, several studies and reports suggest that use of DES has been associated with a lower restenosis rate and with favourable clinical outcomes even though these studies included small number of patients and low rates of angiographic follow up23-29. The aim of the present study is to provide a further contribution in this controversial field reporting the clinical and angiographic outcomes of the use of SES in the treatment of unprotected LMCA stenosis and comparing the results with those of BMS in the same patients subset.

PCI procedure was performed when a suitable anatomy for stenting was present, associated with symptomatic LMCA disease or documented myocardial ischaemia. Patients with contraindication for double anti-aggregation or anticoagulation therapy were excluded. The informed consent was obtained in accordance with the Declaration of Helsinki.

Procedural characteristics included the following parameters: treatment of distal LMCA bifurcation with single or double stent; the utilisation of final kissing balloon for bifurcation lesions, debulking procedure (directional or rotational atherectomy), pressure wire or intra-vascular ultrasound (IVUS) guided revascularisations and use of intra-aortic balloon pump (IABP). Creatine kinase (CK) measurements were systematically performed on admission and every 3 hr. for the subsequent 24 hr., and then every 12 hr. for 2 days. The peak value of CK-MB and T troponin were estimated for each patient. Aspirin was administered to all patients before the procedure and indefinitely thereafter. A loading dose of clopidogrel was performed at least 4 hours before the catheterisation and the double anti-aggregation therapy (aspirin + clopidogrel or aspirin + ticlopidine) continued for at least 6 months. Glycoprotein IIb/IIIa inhibitor use was at the discretion of the operator.

In general, predilation was performed only in very tight lesions using undersized conventional balloons. In calcified lesions, a matched balloon to vessel size (1:1) was used. The stent deployment was achieved by inflating the delivery balloon at nominal pressure. In selected cases, the stented segment was then further dilated with high pressure balloon inflations, to achieve the optimal diameter. All the lesions has been fully covered; lesions involving ostium or shaft without involvement of bifurcation were treated with a single stent. Lesions involving bifurcation were treated as follows: stenting across left circumflex artery (LCX)-ostium, stenting across left anterior descending-LAD-ostium, kissing stenting and provisional T-stenting. No lesion was treated with crushing or culotte technique. Final kissing balloon dilation was performed in almost all patients. IVUS guidance was used in those lesions with a not completely convincing final angiographic aspect.

The follow-up ended for all patients on the 30th April 2005; the mean follow-up period for the whole population was 23.6±12 months (18±8 months in SES group; 29±10 months in BMS group). Periodical phone interviews and office visits were scheduled at 1, 3, 6 and 12 months and at the end of the follow-up period (April 2005). A coronary angiography was routinely performed after 9 months, or earlier if driven by clinical symptoms or documented myocardial ischaemia.

Procedural success was defined as revascularisation with a residual stenosis <30% at the QCA, without major intraprocedural or in-hospital adverse events (acute myocardial infarction, or AMI; death or emergent CABG).

Deaths were divided into cardiac and non cardiac; those that were not surely classifiable were considered as cardiac.

STEMI was defined as increase of Ck-MB 3 times over the upper limit of normal together with typical ST elevation at the ECG control.

NSTEMI was defined as increase of Ck-MB 3 times over the upper limit of normal without ST elevation at the ECG control.

Restenosis was defined as lumen reduction at the segment site (i.e. stent length plus 5 mm proximally and distally) >50% at the QCA.

Univariate analysis was performed to evaluate baseline clinical and angiographic differences in the two groups; multivariate analysis was performed to evaluate correlations between baseline clinical and procedural parameters and the recurrence of intra-hospital adverse events or MACEs during the follow-up. Data are expressed as mean±SD for continuous variables and as frequencies for categorical variables.

Difference between group were evaluated using chi-square and Student-T test. MACE-free survival distributions were assessed according to the Kaplan Meier method. To compare MACE-free survival between the two groups we used the Log-Rank test. All the analysis were performed using dedicated software (SAS and Statistica).

The baseline clinical and angiographic characteristics are summarised in Tables 1 and 2. 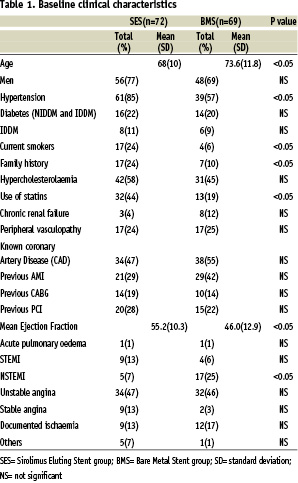 Procedural characteristics are shown in Table 3. 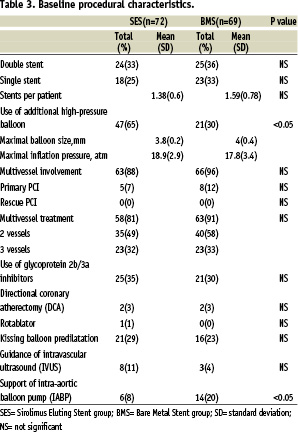 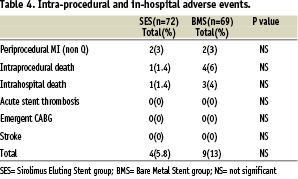 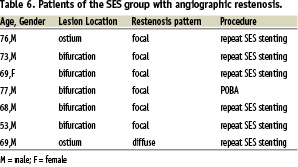 In the SES group restenosis occurred in 7 patients; 71% of restenosis (n=5) occurred in patients with bifurcation LMCA lesions; all the re-stenosis, except one, were found out at the nine-month angiographic control in asymptomatic patients; restenosis were all focal, except one, and all were successfully treated with a new SES implantation (Table 6).

Clinical follow-up information was collected in 100% of the patients in the SES group and 99% in the BMS group. The mean clinical follow-up duration was 18±8 months in SES group; 29±10 months in BMS group. Target lesion revascularisation at one year was performed in 6 SES patients and in 9 BMS patients (13.6% vs 24.3%, P=NS). No deaths or acute MIs occurred in either group. The MACE free survival rate at 2 years was 83% in the SES group vs 55% in the BMS group (p<0.001); see Figure 1 (Kaplan-Meier curves for two-years MACE-free survival in patients treated with SES and BMS. 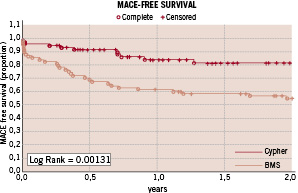 At the multivariate analysis the only variable related with a significant reduction of MACE was the use of SES (p=0.0024); on the other side, variable significantly related with an increased MACE incidence was the presence of bifurcation lesion (p=0.025).

Patients over 75 years, diabetics, with a poor EF (<35%) and High risk patients (EuroSCORE>6 and Parsonnet >15) had a slightly higher MACE incidence, though p value was not statistically significant in both groups (p=0.16 and p=0.09).

The findings of the present study show that in patients with coronary artery disease, SES implantation for the treatment of unprotected LMCA lesions is feasible and safe. In fact, it is associated with a low procedure-related complication rate and without subacute or late stent thrombosis. Compared to SES, BMS implantation is associated with a higher intra-procedural complication rate. This might be due to the fact that patients treated with BMS were elder and with lower ejection fraction. Long-term clinical outcome was also better in patients treated with SES likely due to the reduction of in-stent restenosis with the use of SES (13.6% vs 24.3%; p=NS).

In contrast with prior studies24,28 that included a large number of elective patients, this one can be considered a “real world” study: the population of the study were consecutive “all comers” patients including those with poor EF, with “very high risk” profile (EuroSCORE>13 and Parsonnet> 20), diabetics and patients who underwent primary percutaneous coronary intervention (PCI) for acute coronary syndromes (AMI or UA). This might explain the slightly lower procedural success rates of this study compared to previous studies and for this reason the results obtained in this study might be considered excellent, despite the high risk profile of our population. High-risk sub-groups indeed don’t move away significantly from the whole population in terms of incidence of MACE. The only negative predictor of MACE seems to be the presence of distal LMCA bifurcation lesion, though the rate of lesions involving bifurcation is significantly different in the two groups (58% in SES group vs. 70% in BMS group; p<0.05).

LMCA bifurcation lesions are still considered infeasible for percutaneous intervention both for the technical difficulties of stenting and the higher incidence of in-stent restenosis involving the large side branches (especially left circumflex artery). Several studies comparing the use of SES with historical controls32-34 for the treatment of LMCA bifurcation lesions, showed a very low restenosis rate in the main vessel and no benefit in terms of reduction of restenosis of side branch with the use of SES for both bifurcation branches (two stents) over single stent and balloon angioplasty for the second branch (provisional T stenting). Moreover, no superiority of single technique (T Stenting vs Coulotte vs Crush) has ever been demonstrated.

Thus, even in the era of the drug eluting stent the higher overall restenosis rate in bifurcation lesions remains a challenge. However the compelling results of this study and others32-34 showing very low rates of restenosis and TLR indicate that the treatment of LMCA bifurcation may become an achievable goal for PCI with SES.

It is indeed well known that in-stent restenosis leads more often to repeat interventions (PCI or surgery) and also might influence long term survival because might cause sudden death. SES has been shown to be very effective in suppressing intimal growth even in complex LMCA lesions (as documented also in the present study) reducing long term in-stent restenosis which is consequently translated by better long-term clinical outcomes.

While prior studies have demonstrated safety and efficacy of DES implantation on a relatively short-term period30,31, this study has prolonged the mean observational period up to 2 years, providing important confirmation of sustained safety and effectiveness of SES implantation for unprotected LMCA stenosis.

The major limitation of the present study is represented by the fact that some differences can be found in the baseline clinical and lesion characteristics between the two groups; patients belonging to BMS group are older, with a lower LVEF, more often presented with NSTEMI and more frequently were affected by distal LM stenosis. This means that the poorer outcome of BMS group might have been influenced by the higher risk profile of BMS patients and therefore that the superiority of DES shown in this paper could be less evident if the two groups were right balanced. Moreover these findings are based on a single centre observational study and that the number of patients is relatively small to generalise our results to all patients with LMCA lesions. Data deriving from long term and multicentre randomised study comparing SES implantation and bypass surgery are needed and will help us to clarify better the potentiality and the role of this approach.

The use of BMS for the treatment of ULMCA lesions is associated with a high events rate both in hospital and during FU period. On the other hand, SES implantation for the treatment of the same lesion subset in a “real world” population is safe and effective, with a very low procedure-related complication rate and with an extremely encouraging 2 years MACE free survival (83%) both for low risk patients and for high risk sub-groups.

Based on these findings and those already reported in literature, PCI for ULMCA with SES implantation should be suggested.