Methods and results: We conducted a multicentre registry focused on nonagenarians treated with percutaneous coronary interventions, gathering data from five tertiary centres in Spain. We included 38 patients with ST-segment elevation acute myocardial infarction who presented within 12 hours after symptoms onset and who were treated with primary percutaneous intervention. Mean age was 91.5 (90-98). Angiographic success was achieved in 90%, and TIMI 3 flow in 76% of cases. In-hospital mortality was 34.2%, concentrated in patients with major bleeding (100% vs. 31.4%), final TIMI flow grade <3 (71.4% vs. 22.7%), and Killip class > I at admission (53.3% vs. 21.7%).

Conclusions: Primary percutaneous coronary intervention in nonagenarians with ST-segment elevation acute myocardial infarction is associated with high rate of successful recanalisation of the infarct-related artery. Mortality is concentrated in patients with severe bleeding during hospitalisation, heart failure at admission, and final TIMI flow <3.

Ischaemic heart disease, and especially acute myocardial infarction,is a leading cause of death among patients all over the world1-3. Although the prevalence of coronary artery disease increases with age, elderly patients are under-represented in clinical trials. We are facing aprogressive growth in the elderly population; thus, the management of nonagenarians with coronary artery disease is an emerging challenge. Although primary percutaneous coronary intervention (PCI) is the standard of care for patients admitted with ST elevation myocardial infarction (STEMI), in very elderly patients there is a trend towards more conservative treatment, in addition to acknowledged underuse of invasive treatments and cardiovascular medications4,5.

Prior studies have revealed that age over 75 is associated with higher mortality and increased risk of complications of PCI6-9. Information from clinical trials shows that in spite of the higher rate of complications and mortality, older patients have enhanced clinical outcomes when treated with primary PCI10-12. We report the outcomes of a series of nonagenarians (age ≥90) admitted with STEMI and treated with primary PCI in five Spanish tertiary hospitals.

In five Spanish centres, we conducted a registry including patients ≥ 90 year-old with STEMI treated with primary PCI within 12 hours after symptoms onset. Patients with cardiogenic shock at the beginning of the procedure were also included. We retrospectively recruited 38 patients, who were followed-up during the hospitalisation period.

Once written consent for treatment was obtained from the patient or his/her relatives, PCI was performed in all cases by femoral access using a 6 Fr guiding catheter. All primary PCI were performed at five tertiary hospitals by senior interventional cardiologists. All patients received 300 to 500 mg of aspirin and a loading dose of clopidogrel (300 or 600 mg according to local protocols) before the PCI. Intravenous unfractionated heparin 100 IU/kg was administered at the beginning of the procedure, as well as additional doses if necessary to obtain an activated clotting time >300 seconds. Coronary stenting (either bare-metal or drug-eluting), thrombus aspiration catheter, intra-aortic balloon pump, and glycoprotein IIb/IIIa inhibitors were used accordingly to the physician’s preference in each individual patient.

Acute renal failure was defined as an increase of 0.5 mg/dl in plasmatic creatinine. Major bleeding was defined as one that required blood transfusion and/or was life-threatening. Recurrent myocardial infarction was defined as ischaemic-type chest discomfort lasting at least 30 minutes associated withre-elevation of serum troponin or creatinine phosphokinase valuestwo-fold the upper limit of normal at least 48 hours after the procedure; and/or new ST elevation or new pathological Q waves. Left ventricular ejection fraction (LEVF) was assessed by echocardiography just prior or following the procedure.

Statistical analysis was performed with SPSS 15 statistical package (SPSS Inc., Chicago, IL, USA). Continuous variables are expressed as means (standard deviation) and discrete variables as percentages, unless otherwise specified. No univariate or multivariate analyses were made due to the small sample size.

From January 2000 to January 2009, 38 patients aged ≥ 90 with STEMI treated with PCI within 12 hours after symptoms onset at five Spanish hospitals were included in the study. Baseline characteristics of the study population are presented in Table 1. Mean age was 91.5 ranging from 90 to 98 years. The prevalence of cardiovascular risk factors showed a low prevalence of diabetes, hypercholesterolaemia and smoking. Only one patient (2.6%) was a current smoker. The prevalence of other comorbidities was relatively low: chronic renal disease was present in 10.5%, active neoplasm in 7.9%, atrial fibrillation in 7.9% and previous stroke in 7.9%. No patient had a previous diagnosis of chronic obstructive pulmonary disease, and none of the patients had severe cognitive impairment. 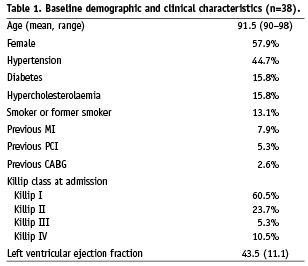 Angiographic findings and procedure details are shown in Table 2. Angiographic success was achieved in 90% of PCI. After revascularisation, final TIMI flow grade I, II and III was 10.3%, 13.8% and 75.9%, respectively.

The mean number of diseased vessels was 1.7, even so single-vessel disease was found in 44.7% of patients. Only one patient (2.7%) had absence of significant lesions at epicardial coronary arteries.

Culprit lesion was situated in proximal, medial and distal segments in 58.3%, 33.3% and 8.3%, respectively. The mean number of treated vessels at index procedure was 1.1; using a mean of 1.32 stents implanted per patient, most of them (83.8%) bare metal stents. Only three patients (7.9%) received glycoprotein IIb/IIIa inhibitors, all of them abciximab. 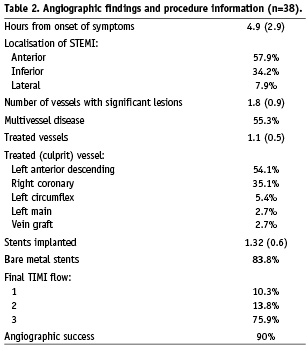 In-hospital outcomes are presented in Table 3. Remarkably, there were neither recurrent infarction, nor new target vessel revascularisation, nor stroke. Incidence of major bleeding was 5.4% (two patients with severe bleeding related with the puncture site, both receiving IIb/IIIa inhibitors), and 16.2% of patients suffered from acute renal failure. Four patients (10.5%) underwent a second PCI to treat a non-culprit vessel during the admission.

Despite previous data on the high rate of complications and failed PCI, in our series we achieved a high angiographic success rate (90%) and a high rate of final TIMI III flow grade (76%). These data show that primary PCI is technically feasible in nonagenarian patients, offering good angiographic results and a high rate of successful recanalisation of the infarct-related artery. The clinical benefit of primary PCI in elderly patients in comparison with thrombolytic therapy has been explained by a higher successful recanalisation of the infarct-vessel, a dramatic reduction of intracranial bleeding, and a reduction in the risk of mechanical complications13,14.

Although elderly patients have a high rate of in-hospital major complications6-9, in the present series we observed acceptable rates of major bleeding (5.4%) and acute renal failure (16.2%). The relatively low incidence of bleeding complications may be related with the low rate of IIb/IIIa inhibitor administration in this series. Probably, physicians involved in the procedures were concerned about the bleeding complications related with this type of drugs. There were no re-infarctions, strokes, or new revascularisations of the target vessel during hospitalisation. The prevalence of multi-vessel disease (55%) was similar to other series of patients treated with primary angioplasty15. The strategy of only culprit vessel revascularisation in most patients may have played a role in minimising interventional and in-hospital complications.

In-hospital mortality of nonagenarian patients with STEMI treated with primary PCI was 34%. Although this mortality rate is high, it may be considered acceptable, considering the high-risk profile of the study population6,9,16. Patients in Killip class I at admission, and those with final TIMI III flow had a good rate of survival (77% and 78%, respectively).

Current percutaneous coronary intervention (PCI) guidelines advise that age alone should not disqualify a patient for PCI17,18, although controversy still remains in the setting of cardiogenic shock19. Information from current registries demonstrate a significant survival benefit for elderly patients clinically selected for PCI20,21. However, their higher incidence of comorbidities and risk for bleeding complications should be taken into account when considering the need for PCI16. The low prevalence of severe comorbidities in our multi-centre registry (chronic renal disease 10%, neoplasms 8%, previous stroke 8%) reflects that patients referred for PCI were selected, and probably some nonagenarian patients with ST-segment elevation and severe non-cardiac diseases were managed conservatively in these centres and therefore were not included in this study.

Our study has several limitations. First of all it is indeed a small series, but is the longest published series hitherto of primary PCI in nonagenarians patients. Due to the relatively low number of patients included, we were not allowed to perform any univariate or multivariate statistical analyses that could have added interest to the study. Besides, the patients who underwent primary PCI were certainly a selected population, since patients with several comorbidities and/or bad cognitive or physical condition probably received more conservative treatment. Last, there is no control group with patients treated with thrombolysis; but even trials focused in the treatment of STEMI in the elderly included a very low number of nonagenarian patients.

Nonagenarian patients with ST-segment elevation acute myocardial infarction can be treated with primary percutaneous coronary intervention. This reperfusion strategy offers a high rate of successful recanalisation of the infarct-related artery, with low incidence of procedural complications. Mortality was high in the overall population, but it was relatively low in patients without heart failure at admission.