A 60-year-old male with a history of an old myocardial infarction was admitted to our hospital for coronary angiography due to stable angina with a positive exercise stress test. Panel G shows an 80% angiographic stenosis of the LCx with a filling defect, and luminal haziness, consistent with the angiographic features of a recanalised thrombus.1 OCT of the LCx (Panel H), shows signal rich, high-backscattering diaphragm-like protrusions, dividing the lumen to multiple small channels communicating with each other. Based on the angiographic appearance, we speculate that these diaphragm-like protrusions represent remnants of a late stage recanalised thrombus. The lesion was re-crossed without difficulty and stented successfully. 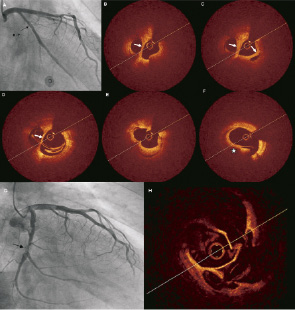