Aims: To use optical coherence tomography (OCT) to evaluate the time course, risk factors, and clinical implication of in-stent neoatherosclerosis.

Nevertheless, detailed in vivo information about neoatherosclerosis is limited, in that previous OCT studies were performed in small numbers of patients with variable symptoms or small numbers of lesions with variable amounts of neointimal tissue6-8. Therefore, the present OCT study was designed to investigate the time course, risk factors and clinical implication of neoatherosclerosis in a large number of mostly symptomatic patients with a significant burden of neointimal tissue.

From our institute’s OCT registry database, we identified 158 consecutive patients with >50% neointimal cross-sectional area (CSA) stenosis who were studied between January 2008 and July 2012. Among these patients, six patients were excluded, five due to poor OCT image quality, and one because of balloon angioplasty before acquiring OCT images. Consequently, a total of 152 patients with 128 DES- and 24 BMS-treated lesions were included in this study. The median time intervals from stent implantation to follow-up OCT were 22.4 (11.6-51.3) months in DESs and 130.4 (110.2-159.7) months in BMSs. The reasons for follow-up angiography were: 1) evidence of myocardial ischaemia or symptoms of coronary artery disease (n=126); or 2) planned follow-up angiography for other stented lesions (n=26). The selection of DES at the time of coronary intervention was at the physician’s discretion; patients were treated with 41 sirolimus-eluting stents (CYPHER®; Cordis, Johnson & Johnson, Warren, NJ, USA), 33 paclitaxel-eluting stents (TAXUS®; Boston Scientific, Natick, MA, USA), 29 zotarolimus-eluting stents (Endeavor® Sprint or Endeavor® Resolute®; Medtronic, Minneapolis, MN, USA), 16 everolimus-eluting stents (XIENCE®; Abbott Vascular, Abbott Park, IL, USA), and nine biolimus-eluting stents (Nobori®; Terumo Corporation, Tokyo, Japan). BMS and DES implantation was performed using conventional techniques. Unfractionated heparin was administered as an initial bolus of 100 IU/kg, with additional boluses administered during the procedure to achieve an activated clotting time of 250 to 300 seconds. Dual antiplatelet therapy (aspirin and clopidogrel) was recommended to all patients for at least 12 months after DES implantation, and for one month after BMS implantation. This study was approved by the Institutional Review Board of our institute, and written informed consent was obtained from each patient. At the time of OCT follow-up, the clinical presentations of the patients were acute coronary syndrome in 21 patients, stable angina in 105 patients, and no symptoms in 26 patients. Eight patients with stent thrombosis were included in the group of 21 patients with acute coronary syndrome. General inclusion and exclusion criteria of follow-up OCT procedures have been previously reported10.

Stent thrombosis was defined according to the recommendations of the Academic Research Consortium11. The timing of stent thrombosis was classified as late (31-365 days) or very late (more than 366 days) post index procedure. Target lesion revascularisation (TLR) was defined as a repeat percutaneous intervention or bypass surgery of the target lesions with the following findings: ischaemic symptoms or positive stress test and angiographic minimal lumen diameter stenosis ≥50% by quantitative coronary angiographic analysis or angiographic diameter stenosis ≥70% by quantitative coronary angiographic analysis without either ischaemic symptoms or a positive stress test.

OCT was performed with either the Model M2 imaging system or the C7-XR™ imaging system (LightLab Imaging, Inc., St. Jude Medical, St. Paul, MN, USA). In the former system (Model M2), the occlusion catheter was positioned proximal to the stent and a 0.014 inch wire-type imaging catheter was positioned distal to the stent. During image acquisition, the occlusion balloon (Helios; Avantec Vascular Corp., Sunnyvale, CA, USA) was inflated to 0.4 to 0.6 atm, and lactated Ringer’s solution was infused at 0.5 to 1.0 mL/sec. The imaging wire was pulled from distal to proximal with a motorised pullback system at 1.0 mm/sec10. The frequency-domain OCT system (Model C7-XR™) has been developed to generate frames at much higher rates and thus allow faster pullback speeds. OCT images were generated at 100 frames/sec while a catheter was pulled back at 20 mm/sec. A non-occlusive contrast medium was continuously flushed through a guiding catheter at a rate of 4 to 5 ml/sec for three to four seconds. With both systems, continuous images were acquired and stored digitally for subsequent analysis. OCT was performed immediately after successful and careful aspiration of thrombus in patients with intra-stent thrombus. When the attenuation caused by intraluminal material obscured the underlying neointima, the characteristics of neointima were identified proximal or distal to the intraluminal material.

All OCT images were analysed at a core laboratory (Cardiovascular Research Center, Seoul, South Korea) by analysts who were blinded to patient and procedural information. Cross-sectional OCT images were analysed at 1 mm intervals for quantitative measurement at the segment of >50% cross-sectional area stenosis of neointima: (neointimal CSA/stent CSA) ×100. Stent and luminal CSA were measured, and neointimal CSA was calculated as the stent CSA minus the luminal CSA. As shown in Figure 1, stented segments with >50% neointimal CSA stenosis were then assessed qualitatively to characterise neointimal tissue as: 1) homogeneous neointima, an uniform signal-rich band without focal variation or attenuation; 2) heterogeneous neointima, focally changing optical properties and various backscattering patterns; 3) layered neointima, layers with different optical properties, namely an adluminal high scattering layer and abluminal low scattering layer; and 4) neoatherosclerotic neointima that contains the following features - lipid-laden neointima, neointima with calcification or thin-cap fibroatheroma3,6,12,13. Lipid-laden neointima was defined as a signal-poor region with diffuse borders, and neointima with calcification was defined as a well-delineated, signal-poor region with sharp borders13. To distinguish layered neointima from lipid-laden neointima, we postulated that a signal-poor region that fully masked the stent struts behind the neointima was considered as lipid-laden neointima. The inter- and intra-observer agreement for assessment of neointimal tissue morphology in our laboratory has already been reported in a previous study14. A thin-cap fibroatheroma-like neointima was defined as neointima with a fibrous cap thickness at the thinnest part ≤65 µm and an angle of lipid-laden neointima ≥180°3,6,13. Neointimal rupture was a break in the fibrous cap that connected the lumen with the underlying lipid pool. Intraluminal material was defined as visible material inside the vessel lumen12. Microvessels were defined as well-delineated low backscattering structures <200 μm in diameter showing a trajectory within the vessel12. The criteria for the diagnosis of neoatherosclerosis were lesions with lipid-laden neointima, neointima with calcification, a thin-cap fibroatheroma-like neointima or neointimal rupture. 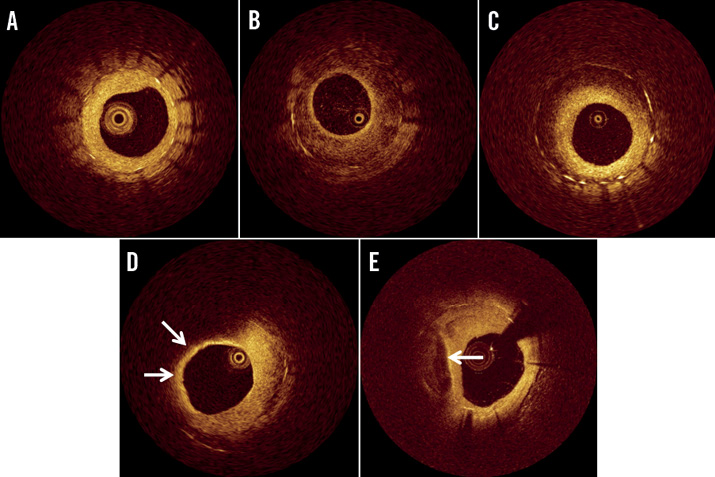 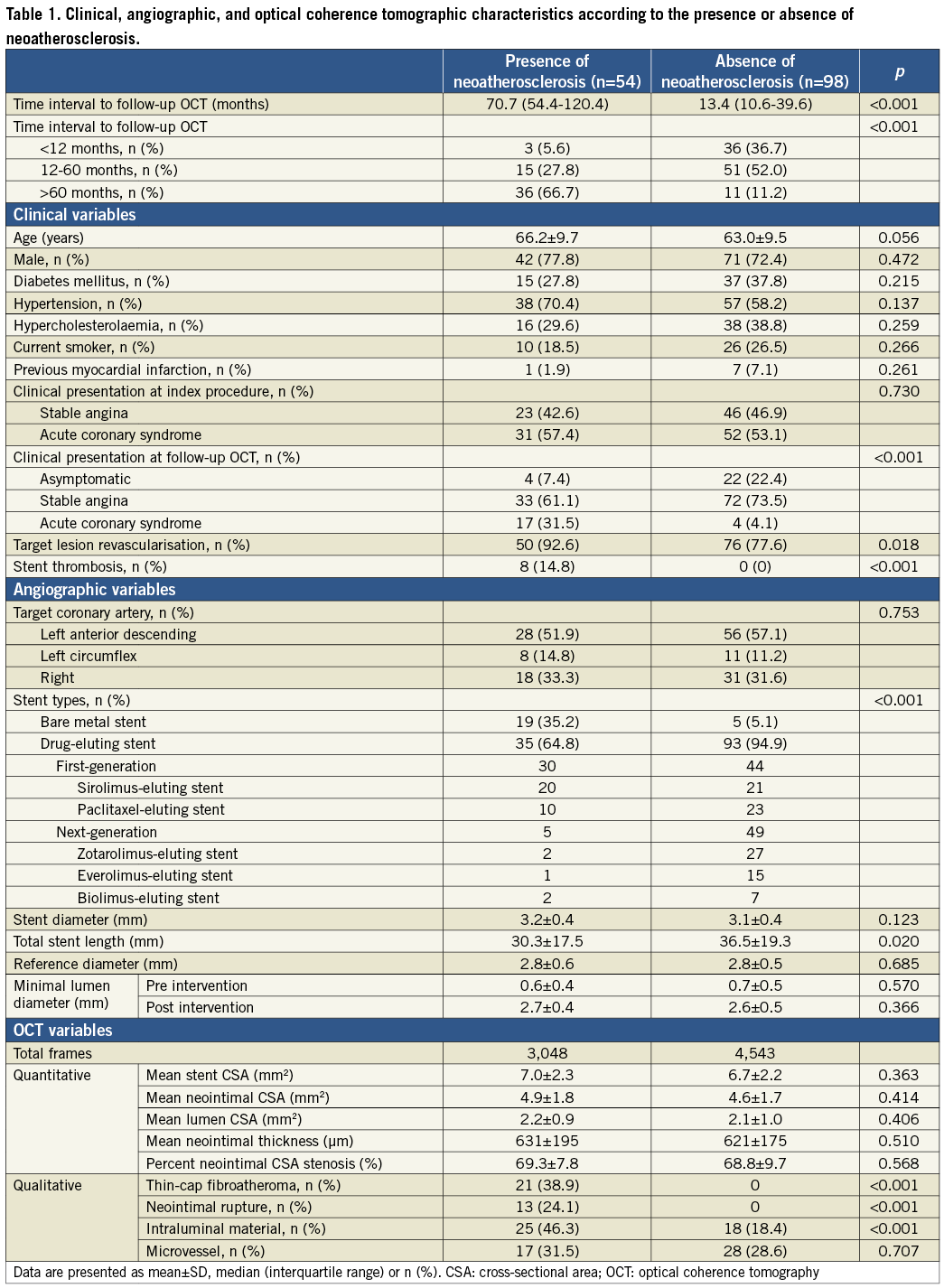 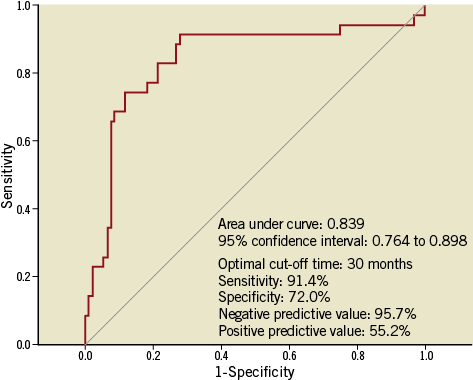 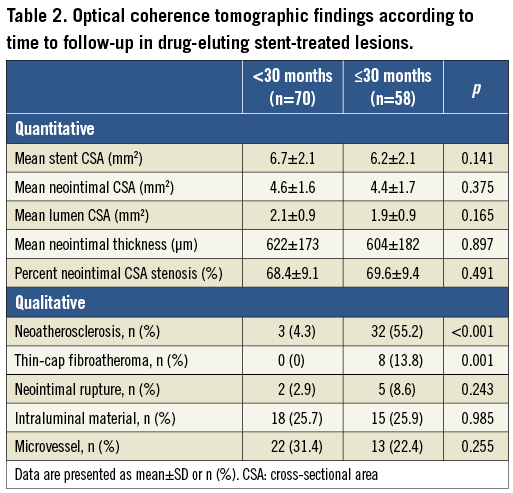 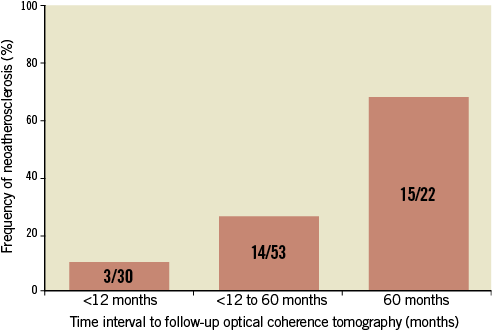 This study had several limitations. The study population was relatively small and there may have been some potential for selection bias. Direct comparisons between BMS and DES were not available due to the small number of BMS-treated lesions and the different time interval to follow-up between the two groups. Results from the present study suggest that next-generation DES might be superior to first-generation DES in respect of the development of neoatherosclerosis. However, further investigation should be mandatory because long-term OCT follow-up of next-generation DES was not yet available and there was a potential bias for the underrepresentation of the next-generation DES. The current OCT technology might have some limitations in the accurate assessment of neointimal tissue characteristics.

This OCT study suggested that neoatherosclerosis occurred in one-third of stented lesions with >50% CSA stenosis of neointima. Neoatherosclerosis might contribute to clinical deterioration of patients at a late phase after DES implantation. OCT could help to understand the mechanism of late stent complications and could drive the therapeutic option for in-stent restenosis.