Moxy® drug-coated balloon: a novel device for the treatment of coronary and peripheral vascular disease

The Moxy drug-coated PTCA/PTA balloon (Lutonix, Inc. Maple Grove, MN, USA) is a paclitaxel-coated balloon with a hydrophilic carrier to optimize the drug release onto the vessel wall. It represents an interesting alternative to drug-eluting stent (DES) for the percutaneous treatment of in-stent restenosis, de novo coronary lesions or peripheral artery disease.

Adoption of DES has reduced coronary restenosis rates to 7.9-8.9% at nine months1-3, but this benefit is compromised by a higher incidence of late and very late stent thrombosis4-8. The polymer component of DES may contribute to inflammation of the vascular layers9, eventually resulting in thrombosis10-12, and the anti-proliferative drug is eluted from the same metallic struts that should ideally be endothelialised, creating a drug-gradient that prevents proper neointimal healing. In this perspective, drug-coated balloons (DCB) represent an interesting alternative, since they don’t utilise polymers and the drug is distributed along the vessel wall without creating a peri-strut gradient.

DCB have three components: the balloon, the drug and the carrier, which is a critical component. The balloon is usually compliant or semi-compliant. The anti-proliferative drug is paclitaxel at a dose of 2-3µg/mm2 in all the currently available devices. Paclitaxel is markedly hydrophobic, therefore alone it has very limited transfer onto the vessel wall during the short time of a balloon inflation. However, once delivered to tissue it diffuses through the vessel wall and binds to fixed hydrophobic components of the tissue, becoming resistant to wash out and exerting a prolonged biological effect13. The carrier is the substance that enables the transfer of the hydrophobic paclitaxel onto the tissues of the vessel wall through a hydrophilic milieu. It plays a critical role in the pharmacokinetics and in the efficacy of the different devices tested. The carrier also determines the amount of drug lost in transit. Thus a carrier-free balloon will suffer negligible loss of paclitaxel (hydrophobic) during transit, but the drug transference to the vessel wall will also be minimal. The hydrophilic carrier (e.g., iopromide) increases transference rate of the drug onto the vessel wall13-15 but also loss of paclitaxel during transit.

Lutonix (Maple Grove, MN, USA) has developed a DCB with a proprietary hydrophilic carrier for coronary and peripheral applications.

Description of the Moxy DCB

The Moxy DCB is a standard angioplasty catheter with a highly specialised drug coating on the balloon portion. The device consists of a dual lumen shaft in two separate designs: rapid exchange (Rx) and over-the-wire (OTW), for coronary and peripheral applications, respectively. The coronary Rx system is compatible with 0.014” guidewire and 5 Fr guide catheters. The peripheral OTW system is compatible with 0.018” guidewire, 7 Fr guide catheters and 6 Fr sheaths.

The Moxy DCB is semi-compliant with a low-profile tapered tip (Figure 1). The balloon is made from a polyamide material capable of achieving high inflation pressures (>16 atm for Rx and >12 atm for OTW). Two radiopaque marker bands are located at the proximal and distal ends of the balloon to facilitate fluoroscopic visualisation of the DCB during delivery and placement. The proximal portion of the DCB catheter includes a female luer lock hub connected to the inflation lumen used to inflate and deflate the balloon. Each product has a balloon protector and stainless steel stylet to protect the balloon prior to use. 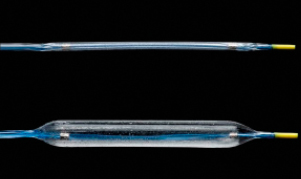 Description of the Lutonix drug coating

The Lutonix drug coating is a non-polymer based formulation consisting of the anti-proliferative agent Paclitaxel and a proprietary hydrophilic carrier that is designed to minimise the loss of drug during transit and to optimise the drug uptake by target vessel tissue during angioplasty. Paclitaxel is evenly distributed along the working length of the balloon at a surface concentration of 2 µg/mm2 (33% lower than other DCBs).The proprietary carrier was selected among more than 200 substances tested as the one providing the best coating uniformity, pharmacokinetic profile and transfer efficiency.

Treatment of ISR is currently a favoured indication for DCB, because the optimal therapeutic approach to ISR is still a matter of debate. Re-stenting with DES has proven to be superior to brachytherapy16,17 and to plain balloon angioplasty18,19, but it cannot be considered an optimal solution, because double stent layers have been associated to delayed neointimal healing20 and suboptimal clinical outcomes21.

Other DCB with paclitaxel at a dose of 3 µg/mm2 and hydrophilic carrier have proven to be superior to plain-balloon angioplasty for the treatment of ISR in randomised trials. DCB have less incidence of major adverse cardiovascular events (MACE), mainly due to a significant reduction in target lesion revascularisation (TLR), lower in-segment late lumen loss and lower rates of binary restenosis22,23. Compared to paclitaxel-eluting stents (PES), DCB have proven lower in-segment late loss and a statistically non-significant trend to lower binary restenosis and MACE, the latter mainly driven by the larger need for TLR with PES24. In the scope of these results, DCB has emerged as the best currently available therapy for ISR.

The Moxy DCB is currently being tested for the treatment of coronary ISR in an observational registry titled PERVIDEO I (ClinicalTrials.gov Identifier: NCT00916279).

The combination of DCB (paclitaxel-coated at 3 µg/mm2, hydrophilic carrier) with BMS results in larger inhibition of neointimal hyperplasia than sirolimus-eluting stent (SES) in animal coronary overstretch models25. However, this combination failed to prove non-inferiority vs. SES for the treatment of human de novo coronary lesions26.

The ongoing De Novo Pilot Study (NCT00934752) is a multicentre study assessing performance of the Moxy DCB in combination with a BMS (Multilink Vision; Abbot Vascular, Santa Clara, CA, USA) for treatment of de novo coronary lesions. This study incorporates a randomised, single-blind, open-label design to better understand outcomes based on the sequence of application (DCB first vs. BMS first) with OCT-derived neointimal volume as the primary endpoint.

A randomised clinical trial comparing a carrier-free DCB vs. PES for treatment of small coronary vessels (≤2.75 mm diameter) was prematurely stopped due to disappointing results of the DCB in an interim analysis27. Vessel recoil and the absence of a carrier to facilitate drug transfer might explain these results.

The PEPCAD I registry used a DCB with hydrophilic carrier for treatment of lesions in vessels with 2.25-2.80 mm of diameter. Cross-over to stenting or plain balloon angioplasty occurred in 30% of the cases. At six months follow-up in-segment late loss and binary restenosis were 0.28±0.53 mm and 19,0%, TLR 14% and MACE 18%. Only 10% of the cases suffered acute elastic recoil requiring bailout intervention28.

The feasibility of treating sequentially both branches of a bifurcation with DCB, followed by provisional stenting of the main vessel with BMS, has been tested in small series of patients29. There are no comparative data vs. other strategies and the report of two stent thrombosis has raised some concerns30 . The role of DCB for the treatment of bifurcations is still unclear. Moxy DCB is not being clinically tested for this indication to date.

Further evidence of DCB efficacy is being investigated in the LEVANT I multicentre, single blind, randomised, controlled trial (NCT00930813) which compares the Moxy OTW peripheral balloon vs. plain balloon angioplasty for the treatment of de novo femoropopliteal stenosis.

Tips and tricks for use

The following comments about tips and tricks for use of the Moxy DCB are based on current evidence but also in the personal experience of the main operators involved in the different clinical studies.

In order to minimise the transit time and hence the loss of paclitaxel, systematic predilation is recommended. This also minimises potential disruption of the drug coating from the mechanical stress during difficult lesion crossing. For the treatment of ISR, where the neointimal tissue is usually fibrotic and “slippery” for hydrophilic balloons, predilation is recommended and may require the use of non-compliant devices or cutting balloons. The aggressiveness of pre-dilatation may depend on the lesion characteristics (e.g., calcification) and indication (e.g., ISR vs. de novo lesions).

Although some studies suggest that paclitaxel diffuses into the vessel wall not only in a radial direction, but also distal and proximally following the longitudinal axis of the vessel35, it is somewhat unknown if this longitudinal diffusion is effective to prevent stent edge restenosis. Some clinical studies suggest that geographical mismatch (no drug delivery to a stented or injured vessel segment) is associated with restenosis and TLR36. Until more solid evidence is available in this regard, if the DCB is used in combination with a BMS for treatment of de novo coronary lesions, it is recommended to extend the balloon applications beyond the stent edges (2-5 mm).

The conformability of a balloon to the lumen shape of the vessel is better at low-pressure inflation, suggesting the possibility that transfer of paclitaxel may be optimal at lower atmospheres.

The authors have no conflict of interest to declare.

How should I treat a huge intra-mural haematoma of the ascending aorta after coronary angioplasty?