Looking back into the future: desirudin in acute coronary syndromes and coronary stenting

Although percutaneous coronary intervention (PCI) is a highly effective modality for the management of acute coronary syndromes, it can potentiate the existing prothrombotic state around lesion areas and lead to ischaemic complications. Adjunctive pharmacologic treatment with heparin reduces the risk of ischaemic events, but the utility of heparin is limited by its unpredictable pharmacodynamic effects and its inability to modulate fibrin-bound thrombin. Additionally, a potential risk of heparin-induced thrombocytopenia is associated with heparin use. Direct thrombin inhibitors (DTIs) have emerged as potential alternatives to heparin in patients undergoing PCI. Bivalirudin is a DTI indicated for use in PCI. Results from various studies have suggested clinical benefit associated with the use of bivalirudin, driven primarily by the reduction in bleeding risks compared with the standard treatment regimens. Of concern, however, is a significant increase in acute stent thrombosis with bivalirudin monotherapy compared with heparin plus GPIIb/IIIa inhibitors following primary PCI for ST-segment elevation myocardial infarction (STEMI). Desirudin is a highly potent DTI with greater binding affinity than bivalirudin for thrombin. This report provides a comparative overview of the pharmacology and clinical utility of desirudin and bivalirudin in the setting of PCI.

The majority of acute coronary syndromes (ACS) are caused by intracoronary thrombus superimposed on disrupted atherosclerotic plaque1. Platelets adhere to subendothelial proteins exposed at sites of plaque disruption where they become activated, release vasoactive and procoagulant substances, and aggregate2. The magnitude of the thrombotic process triggered upon plaque disruption is modulated by different elements that determine plaque and blood thrombogenicity. Exposure of tissue factor in the atherosclerotic plaque to flowing blood leads to increased thrombin generation, resulting in platelet- and fibrin-rich thrombus formation2. Such platelet aggregates can occur in response to spontaneous disruption of a vulnerable plaque, but they can also develop during percutaneous coronary intervention (PCI) in response to high-pressure balloon inflations and deployment of coronary stents3,4.

Modulation of thrombotic and coagulation potential is a key factor in improving early (<30 days) clinical outcomes and in preventing complications in patients undergoing PCI4,5. There is clear evidence that anticoagulation in addition to platelet inhibition is effective and the combination of the two therapies is more effective than either treatment alone6-8. To minimise the risk of ischaemic complications during and shortly after PCI, many adjunctive antithrombotic regimens targeting thrombin generation and/or activity have been investigated and are currently in use7-9.

Unfractionated heparin (UFH) has been widely used as the standard anticoagulant during PCI for more than two decades5. Heparin exerts its anticoagulant effect indirectly by binding to antithrombin, thereby dramatically enhancing the ability of antithrombin to inhibit coagulation system enzymes, particularly thrombin and factor Xa10. Yet there are several important disadvantages associated with the use of UFH. Due to its unpredictable, nonlinear pharmacokinetics, UFH exhibits a variable anticoagulant effect, variable binding to blood proteins and the vessel wall, and sensitivity to the inhibitory effects of platelet factor-410,11. Further, the heparin-antithrombin complex is not very effective in neutralising clot-bound thrombin and, in some patients, heparin causes an immunologic thrombocytopenia (i.e., heparin-induced thrombocytopenia [HIT]), which can result in immune-mediated thrombosis10,11. These limitations of heparin have spurred the development of anticoagulants with different mechanisms of action, with the goal of improving outcomes and safety for patients undergoing PCI.

One approach to overcoming some of the limitations of UFH took its cue from the European leech, Hirudo medicinalis, which produces hirudin, a direct thrombin inhibitor (DTI). Direct thrombin inhibitors comprise a class of anticoagulants that bind directly to thrombin and block its interaction with its substrates12,13. While UFH has the potential to induce platelet aggregation, DTIs indirectly inhibit platelet activity10,14-17. Potential advantages associated with the use of DTIs compared with heparin include increased efficacy via the ability to bind to and inhibit fibrin-bound thrombin12,13,18.

Several DTIs are currently approved for use by the European Medicines Agency (EMEA), namely the bivalent DTIs desirudin, lepirudin, and bivalirudin, along with the univalent DTIs argatroban and dabigatran (Table 1)19-30. Results from a recent meta-analysis of data from nearly 36,000 patients in 12 clinical trials indicated that DTIs were more effective than heparin in reducing death or myocardial infarction (MI) in patients with ACS, particularly in patients undergoing early PCI31.

Bivalirudin (Angiox®, The Medicines Company, Parsippany, NJ, USA) is currently the most widely investigated DTI in patients undergoing PCI32-36. When used in place of heparin plus planned glycoprotein IIb/IIIa (GPIIb/IIIa) inhibitors, it has consistently demonstrated a reduction in protocol-defined major and minor bleeding36-38. Major periprocedural bleeding has been identified as an important predictor of increased mortality36,38,39. Whether this apparent relationship between bleeding and risk of death is a cause-and-effect relationship or merely an association based on shared risk factors remains unclear. In the Harmonising Outcomes With Revascularization and Stents in Acute Myocardial Infarction (HORIZONS-AMI) trial, bivalirudin with provisional GPIIb/IIIa inhibitors significantly reduced all-cause and cardiac mortality at 30 days and at 12 months compared with heparin and planned GPIIb/IIIa inhibitors; however, these reductions occurred at the cost of a significant increase in stent thrombosis immediately following the acute intervention (first 24 hours). There are residual concerns about increased stent thrombosis in patients with ST segment elevation myocardial infarction (STEMI) undergoing primary angioplasty and cost issues associated with bivalirudin. The other DTI that has already been tested in PCI, desirudin administered as an IV bolus, may provide a valuable alternative.

Desirudin (Revasc®, Canyon Pharmaceuticals, Hunt Valley, MD, USA) is a selective and potent thrombin inhibitor that is currently approved for prophylaxis of deep venous thrombosis in patients undergoing orthopaedic surgery40. Results from completed studies showed that intravenous (IV) desirudin, with or without subcutaneous desirudin, reduced ischaemic events compared with heparin in patients undergoing PCI41-43. More studies are under way to further investigate the clinical utility of desirudin in this patient population. In this technical report, we examine the pharmacologic basis for considering desirudin over bivalirudin in patients undergoing PCI. The framework for further clinical evaluation of this issue is presented.

Rationale for desirudin in the management of patients undergoing PCI

Desirudin, a recombinant 65 amino-acid protein, has a binding affinity for thrombin greater than 10,000 times that of bivalirudin (desirudin, ki=10-13 moles; bivalirudin ki=10-9 moles)26,27. The mean terminal half-life of desirudin when given as an IV bolus is approximately 60 minutes22,44-46, allowing bolus-only administration in PCI, without the need for a continuous infusion. Desirudin has low allergic/immunogenic potential, even with repeated exposure47,48.

A high binding affinity for thrombin, rapid onset of action, and amodestly longer half-life compared with bivalirudin are characteristics that make desirudin well suited for use in patients undergoing PCI. These pharmacologic properties may be especially advantageous in high-risk patient populations with a high thrombin load.

Several key interventional trials have investigated the use of desirudin in patients undergoing PCI (Table 3). These studies were conducted during the early to mid-1990s when postprocedural anticoagulation was common and adjunctive use of GP IIb/IIIa inhibitors or thienopyridines was not41-43. Van den Bos and colleagues41 conducted a phase II trial in 113 patients with stable angina randomised to desirudin 20mg bolus followed by continuous infusion at a rate of 0.16mg/kg/hr, or to UFH 10,000U administered as a bolus and continued at a rate of 12U/kg/hr for 24 hours. The incidence of MI and/or emergency coronary bypass surgery was higher in the UFH group compared with the desirudin group (10.3% vs. 1.4%, respectively; RR, 7.6; 95% CI, 0.9-65.6). At 24hours post procedure, complete perfusion was present in all patients in the desirudin group compared with 91% in the UFH group, and ST-segment displacement was present in 4% of the patients treated with desirudin compared with 11% of UFH-treated patients41. 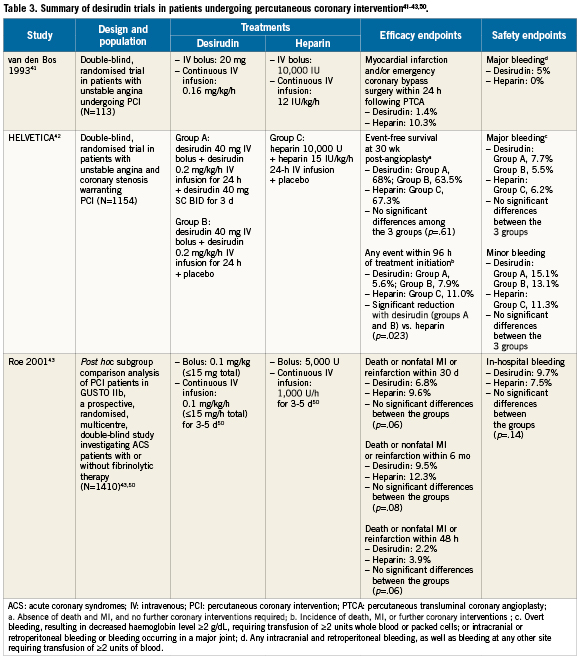 The Hirudin with Heparin in the Prevention of Restenosis after Coronary Angioplasty (HELVETICA) trial was a pivotal, multicentre, randomised, double-blind trial that randomised 1,154 patients with unstable angina undergoing PCI to either: (1) desirudin 40mg IV bolus plus 0.2mg/kg/h infusion for 24 hours; (2) desirudin 40mg IV bolus plus 0.2mg/kg/h infusion for 24 hours, followed by desirudin 40mg subcutaneously twice daily for three days; or (3) UFH 10,000U IV bolus plus 15 U/kg/h for 24 hours (Table 3)42. The primary efficacy outcome was event-free survival (absence of death, nonfatal MI, coronary artery bypass graft [CABG] surgery, use of bailout procedures such as stenting, or second angioplasty at previously dilated sites) at 30 weeks after angioplasty. Other clinical end points included incidence of early cardiac events and measures of safety, tolerability, and luminal renarrowing. The study investigators reported that desirudin was as effective as UFH in event-free survival at 30 weeks. Importantly, desirudin was associated with a significantly reduced incidence of early clinical events (within 96 hours of PCI) compared with UFH (RR in combined hirudin groups, 0.61; 95% CI, 0.41-0.90; p=.023) (Table 2). This benefit was particularly pronounced in the most unstable patients (those with Braunwald class III angina; RR in combined hirudin groups, 0.41; 95% CI, 0.21-0.78; p=.006). There were no significant differences observed between the treatment groups in the incidence of major or minor bleeding events.

An urgent or early invasive mechanical (reperfusion) strategy is recommended in patients with ST segment elevation acute coronary syndromes (STE-ACS) and with non-STE-ACS considered to be at high risk for developing major myocardial necrosis, or in those at risk for rapid progression to vessel occlusion. In patients with a high thrombus burden, facilitation of coronary intervention with potent “upstream” pharmacotherapy and thrombus debulking devices appears promising. Desirudin may be well suited to this interventional strategy because of its high affinity for thrombin, (including clot-bound thrombin) and a balanced risk of major bleeding, along with the practical advantages of a single-bolus only administration and an economical price. Further research is focused on the development of desirudin for contemporary PCI. Positive results from these trials may result in establishing desirudin as the anticoagulant of choice in PCI.

First, a dose-ranging study will evaluate two dosing levels of single-bolus desirudin (30 mg or 45mg) compared with standard regimens of UFH or bivalirudin. The primary efficacy outcome measure will include the 7-day combined incidence of death from any cause, non-fatal MI, and urgent target vessel revascularisation (coronary bypass surgery or PCI) due to myocardial ischaemia. In addition, non-CABG major bleeding occurring up to 48 hours after PCI will be assessed. Repeated blood sampling should allow for a detailed study of the coagulation profile and drug pharmacodynamics. In addition, secondary outcome measures will include area under the curve for high-sensitivity troponin. It is anticipated that this sensitive measure of myocardial damage may unmask important differences between the desirudin bolus regimens and bivalirudin. Our hypothesis is that the optimal desirudin bolus dose will provide superior ischaemic protection compared with bivalirudin owing to its higher binding thrombin-binding affinity and modestly prolonged half-life19,22,23,26,27,29. This study will aim to determine the optimal bolus dose of desirudin, balanced against UFH or bivalirudin, to pursue in a phase III outcomes trial.

Establishment of optimal antithrombotic and anticoagulant protocols remains a major goal for patients undergoing PCI, balancing the risk of ischaemic and iatrogenic bleeding complications. The short-acting nature of bivalirudin may contribute to a favourable safety profile compared with UFH plus GPIIb/IIIa inhibitors, but it may also limit its effectiveness in the prevention of acute stent thrombosis following PCI. The relative safety profiles of currently approved DTIs are unknown, as clinical studies involving direct comparisons of these agents have not yet been conducted.

Desirudin may prove to be a valuable competitor to bivalirudin in the management of patients undergoing PCI. Potential advantages of desirudin include ease of use, potential for increased efficacy owing to its increased binding affinity for thrombin, a modestly longer half-life, and its considerably lower costs. Because of these advantages, desirudin has the potential to become the anticoagulant of choice for the interventional community. Future studies will help to further characterise the advantages of desirudin in patients undergoing PCI.

Editorial support for this article was provided by Peloton Advantage LLC. No author received an honorarium or other form of financial support related to the development of this manuscript.