Patients with acute spontaneous coronary artery dissection (SCAD) are preferably managed conservatively given the good overall results shown with this approach1. In some cases, however, SCAD leads to compromised coronary flow, causing ongoing myocardial ischaemia and requiring revascularisation, generally by percutaneous coronary intervention (PCI)1. Bioresorbable vascular scaffolds (BVS) have emerged as an attractive option to avoid a permanent prosthesis and to allow vessel functional recovery in SCAD patients, who are generally young and have non-atherosclerotic arteries that tend to heal spontaneously1. However, first-generation BVS showed worse performance than benchmark drug-eluting stents2. Despite this, newer-generation BVS are expected to show improved outcomes in atherosclerotic patients and perhaps in SCAD patients2. We evaluated the long-term clinical outcomes of SCAD patients treated with first-generation BVS and provide data in this article to inform future decisions about platform choice. 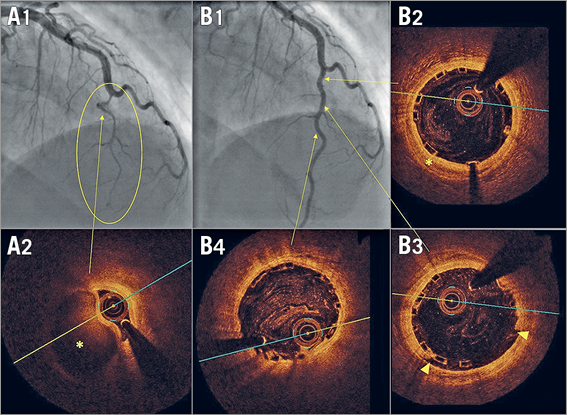 Figure 1. BVS implantation in a mid-LAD type 2 spontaneous dissection. A1) & A2) Angiography at presentation with a severely narrowed lumen (oval) due to the presence of a compressive haematoma confirmed with OCT (asterisk). B1) Angiographic outcome after implantation of two BVS at 10 atmospheres in which vessel straightening and distal calibre recovery are seen. B2) - B4) OCT cross-sectional views: well-deployed scaffold, intimomedial lamina rupture (B3: arrowheads) and residual intramural haematoma (B2: asterisk). 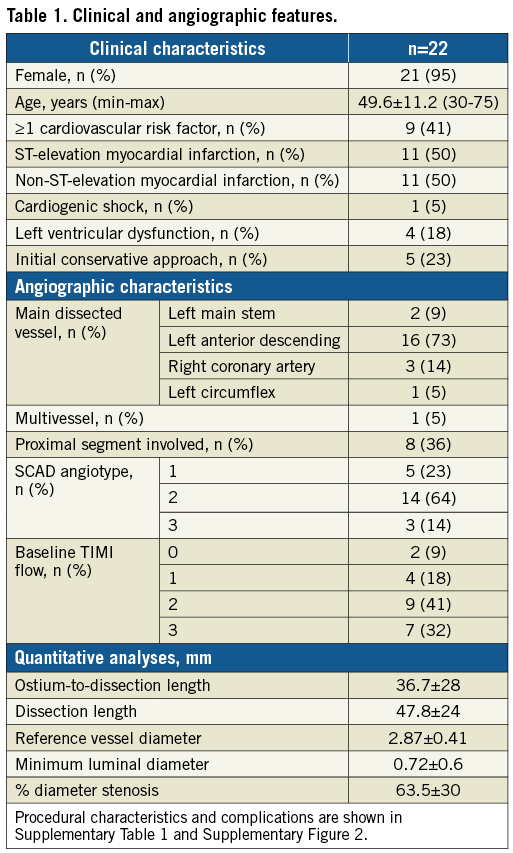 Clinical outcomes are shown in Table 2. The long-term median follow-up time was 3.46 years (IQR: 2.87-3.96; min-max: 1.78-4.82). Bleeding episodes were all minor, and predominantly related to menorrhagia that did not require transfusion or discontinuation of dual antiplatelet therapy (DAPT). Two patients underwent clinically driven repeat revascularisation after discharge: one patient underwent target vessel revascularisation (TVR) one year later for persistent typical angina and persistent dissection flap distal to the previously implanted scaffold, with subsequent resolution of symptoms; the other patient received target lesion revascularisation (TLR) at 13 months due to scaffold shrinkage (Supplementary Figure 3). No recurrent myocardial infarctions, SCAD, or deaths were seen. None of the patients scheduled for surveillance angiography showed findings leading to further intervention. 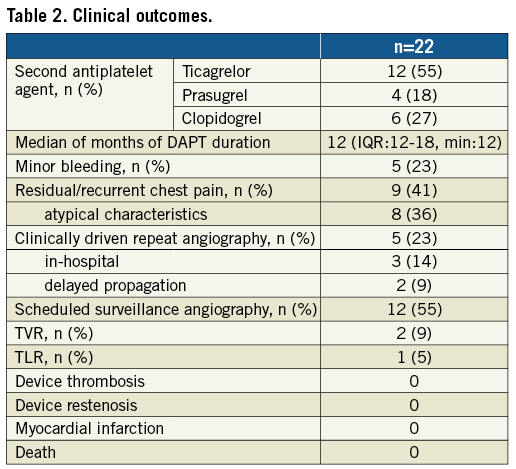 In this multicentre registry comprising 22 high-risk SCAD patients treated with BVS, two patients required repeat revascularisation in the long term, only one being attributable to device failure.

A number of published case reports or mini-series have already reported successful experiences with BVS in SCAD3-5. Ielasi et al reported no clinical events in 18 patients with an interquartile follow-up range of 6 to 28.5 months3. Our study shows the longest follow-up of a true high-risk SCAD population undergoing PCI with BVS. The proportion of ST-elevation myocardial infarction (55%), impaired Thrombolysis In Myocardial Infarction (TIMI) flow (68%), left anterior descending (LAD) or left main stem (LMS) (81%) and proximal segment involvement (39%) is similar if not greater than those observed in the previously published revascularisation series1,3,6.

Procedural complications (three propagations requiring extended stenting) and early events (two in-hospital revascularisations due to late propagation [Supplementary Figure 2]) were common in this series, in keeping with those observed in other published SCAD revascularisation series. We previously reported 19% procedural propagation in a large multicentre series of SCAD patients receiving PCI with stents (n=108)6, while Nakashima et al reported a rate of 24% of this same event within the PCI subgroup (n=34) of their multicentre series7. Moreover, early events during hospitalisation of SCAD patients treated with PCI are also commonly reported1,6.

The predilation, sizing, and post-dilation criteria for scaffold implantation, central to improving outcomes of BVS in an atherosclerotic population2, can be challenging in SCAD cases because of the risk of dissection propagation. In this regard, intracoronary imaging guidance is of paramount importance for a correct BVS deployment1. The use of intracoronary imaging was reasonably high in our series (86%), higher than in the series by Ielasi et al (50%)3. Finally, although a 12-month DAPT regimen was generally used here, a prolonged regimen may be beneficial for SCAD patients undergoing PCI, especially for those receiving BVS.

Owing to the rare nature of this condition, this is a small retrospective study lacking power to generalise its findings. Each case was selected at the operator’s discretion, and thus at risk of bias. However, baseline characteristics reflect the true high-risk profile of the overall cohort. Finally, the studied device is no longer available for clinical use. However, this experience might be regarded as a benchmark for newly developed BVS entering the market2.

Bioresorbable devices represent an attractive option for patients with SCAD who require revascularisation. In this series of high-risk SCAD patients treated with BVS, the long-term favourable outcome brings hope for the future use of new-generation bioresorbable devices in this population.

We are grateful to Vicente Peral, Santiago Jiménez-Valero, Tomás Cantón and Abtehale Al-Hussaini for contributing with patients to this registry. The authors thank Nilesh Pareek for helping in editing this manuscript.

J. Escaned and N. Gonzalo report consultancies and speaker fees at educational events for Abbott. D. Adlam has received research funding from St. Jude Medical for OCT research. The other authors have no conflicts of interest to declare.

Supplementary Figure 1. 3D quantitative coronary analysis of post-stenting plus delayed propagation of a haematoma to a proximal coronary segment.

The fate of spontaneous coronary artery dissection: insight from intravascular imaging at a late follow-up