Methods and results: Six hundred and twenty-five patients were randomised (2:1) to EES or SES in the multicentre XAMI (XienceV stent vs. Cypher stent in Primary PCI for Acute Myocardial Infarction) trial. The primary endpoint was cardiac death, non-fatal AMI or any target vessel revascularisation (TVR) at one year, with a planned follow-up of three years. At three-year follow-up, the primary endpoint was 8.0% for EES and 10.5% for SES (p=0.30). Cardiac death was low and comparable in both groups (EES: 2.5% versus SES: 2.7%; p=0.86), as was definite/probable stent thrombosis (EES: 2.3% versus SES 3.2%; p=0.60).

Conclusions: The event rate at three years in this all-comer, randomised, multicentre AMI trial was low, including stent thrombosis, with no significant difference between first- and second-generation DES. Registration of trial:http://www.trialregister.nl/trialreg/admin/rctview.asp?TC=1123 Candidate number: 2869; NTR number: NTR1123

The primary endpoint of cardiac death, non-fatal AMI or any target vessel revascularisation (TVR) at one year confirmed non-inferiority of the EES and suggested superiority with a low stent thrombosis rate in both stents1. We report here the three-year follow-up of this trial.

The design of the XAMI trial has been reported previously1. Six hundred and twenty-five patients with AMI were randomised (2:1) to receive EES or SES in this all-comer, multicentre, non-inferiority trial.

Randomisation, procedure, endpoints and definitions have been described previously1. The primary endpoint was major adverse cardiac events (MACE) at 12 months, consisting of cardiac death, non-fatal reinfarction or any target vessel revascularisation (TVR). The secondary endpoints were stent thrombosis, MACE and all-cause mortality at 30 days, one, two and three years.

Baseline characteristics have been shown previously1. Several characteristics indicative of the strength of the trial were: a short first medical contact to balloon time (75 minutes), over 50% of patients treated by radial access, and thrombectomy in over 60% of patients.

MACE rates are shown in Table 1 and Figure 1. MACE at three years was 8.0% for EES and 10.5% for SES (p=0.30). None of the individual endpoints was significantly different, neither was target lesion revascularisation (TLR) nor stent thrombosis (Table 1, Figure 2). 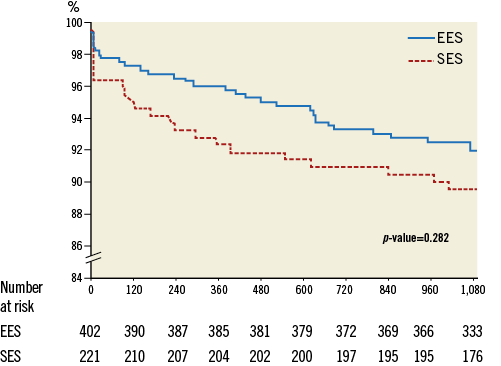 The overall cardiac death rate was low at 2.6%, as was TLR at 2.3% after three years. Beyond one year, five cases of definite stent thrombosis (four EES patients [1.0%] and one SES patient [0.5%]) were seen and there was no probable stent thrombosis. All these patients were still alive at latest follow-up. Dual antiplatelet therapy was used in 4% of patients at two years and <0.5% at three-year follow-up without significant differences between groups. With three withdrawals of informed consent and two patients lost to follow-up, the follow-up at three years was 99.2%.

The most important finding of this long-term follow-up of the XAMI trial is a low cardiac event rate and no significant difference in MACE or any individual endpoint.

The low event rates may have contributed to not demonstrating a significant difference between both stents after three years, next to the rather small sample size. These low event rates may be influenced by a “symptom-to-balloon” time up to 60 minutes shorter than other AMI trials2,3, only 7% of patients in Killip class >1, and a high percentage of thrombectomy and radial access. Long-term follow-up is mainly available from studies comparing first-generation SES or paclitaxel-eluting stents (PES) with bare metal stents in STEMI.

In a recent network meta-analysis of 22 trials including 12,453 randomised STEMI patients treated with BMS, first- or second-generation DES4, it was shown that first-generation SES performed significantly better than PES and BMS, with a significant reduction in cardiac death/MI and TVR. For EES, the data beyond one year are still very limited. Palmerini et al4 only report EES data up to two years of subgroup analyses of all-comer trials, showing no significant differences between SES and EES. The only dedicated randomised study is the RACES-MI trial5, randomising 500 patients to EES or SES, showing no significant difference in cardiac death, MI or TVR at three years.

VLST rates were low for both stent types. EES showed 1.0% VLST between one and three years. The HORIZONS-AMI trial reported a 0.9% VLST rate for BMS between one and three years2. This comparable risk of VLST in second-generation DES and BMS was also reported in the SCAAR registry6. However, the increased risk of VLST in older DES in SCAAR, also seen for SES in the RACES-MI trial5, could not be found in the XAMI trial, despite comparable trial size to RACES-MI. Higher GP IIb/IIIa inhibitor and thrombectomy use in XAMI may have decreased remnant thrombus, possibly reducing early and late stent malapposition. This might play a role in VLST and could be more important in thick strut stents like SES.

The limitations of the XAMI trial have been discussed previously1. The trial was powered for non-inferiority of MACE at one year. At one year, MACE rate curves diverged in favour of EES and statistical analysis pointed to superiority for EES; however, this significant difference was lost at three-year follow-up. This may also be partly due to the lower than expected event rate, decreasing the power of the study. The incidence of the primary endpoint was still 25% lower in EES than in SES, and it cannot be excluded that a much larger trial would have shown persistent superior results for EES at three years.

The XAMI trial is among the first to report the long-term outcome of a second-generation compared to a first-generation DES in AMI patients. The event rate was low for both DES up to three years, including VLST, without differences between both generations of DES in this trial.

The Cardiology Research Foundation of the Medical Centre Leeuwarden has received an unrestricted research grant from Abbott Vascular.

P. Smits has received speaker’s fees from Abbott Vascular and institutional research grants from Abbott Vascular, Boston Scientific, St. Jude and Terumo. A. van ‘t Hof has received speaker’s fees from MSD and Iroko Cardio, and is on the advisory board of AstraZeneca, The Medicines Company, Daiichi Sankyo and Lilly. The other authors have no conflicts of interest to declare.