Lessons from the real bench: non-BRS

Bench testing of stents used in bifurcations can provide information on the general properties that influence performance including crossing profile, radial strength, recoil, flexibility and radiopacity. Problems with device delivery can be clarified. Bench testing identified that side branch dilatation caused stent distortion and elucidated correction strategies. Bench testing led to a stent design change adding connectors between hoops to help overcome the clinical problem of longitudinal distortion. Testing on the bench can determine best deployment strategies and showed that a two-step post-dilatation strategy produced the best deployment with “crush” stenting. Scanning electron microscopy showed that withdrawal of a coronary guidewire trapped between a stent (or scaffold) and a mock arterial wall during a provisional side branch stenting strategy caused only mild linear polymer coating damage. Stent fracture can cause adverse clinical events and our repetitive bend test identified the stents most resistant to fracture. Causes of obstruction of the passage of a balloon over a wire through the side of a stent include damage to the catheter tip, complex cell geometry and inadvertent passage of a wire behind a strut. Bench testing plays a major role in validation of computer modelling of bifurcation treatments and flow alterations.

Bench testing of stents helps predict how they will perform in bifurcations. In its guidance for industry, the United States Federal Drug Administration stipulates that non-clinical (bench) testing should support the safety and effectiveness of intracoronary stents and their delivery systems (dsmica@fda.hhs.gov). The International Organization for Standardization publication, ISO 25539-2, documents minimum requirements for endovascular devices and the methods of test that will enable their evaluation. Such testing helps determine the limits to which a device can be pushed, such as evaluating the device at extreme dimensions, and to assess performance at the outer limits of physiologic variables such as blood pressure, vascular compliance, and anatomic types1.

Stent deformation and side branch dilatation

More than 15 years ago we were surprised that dilatation through the side of a stent caused distortion7. Similar distortion also occurs in bioresorbable scaffolds8. There is a good and a bad side to this distortion and, if the balloon follows a wire that crosses to the SB through a distal cell near the carina, there is best clearance of struts from the SB ostium and best support of the proximal rim of the ostium by struts (Figure 1), as has been described again recently9. We and others have described an SB dilatation strategy preceded by proximal optimisation which assists distal crossing8,10.The bad side of distortion (narrowing of the scaffold distal to the SB ostium, malapposition opposite the ostium) can be corrected by a number of post-dilatation strategies (Online Figure 2). With conventional kissing balloon post-dilatation (KBPD), the proximal markers of both balloons are aligned (Online Figure 2). The site of maximum dilatation and symmetry of stent expansion with conventional KBPD varies greatly11 because of variability in how the balloons wrap around each other (Moving image 1). Distortion may be best corrected with mini-KBPD8, also called minimal overlap11, where only a short length of SB balloon lies in the MB (Online Figure 2). With “snuggle” balloons (Online Figure 2), the SB balloon lies entirely within the side branch12. MB post-dilatation up to the carina (final proximal optimisation treatment) is being studied as a possible distortion correcting strategy (Online Figure 2)13. In addition, sequential SB then MB dilatation has been studied as an alternative to conventional KBPD where proximal optimisation has not been employed13.

Figure 1. The importance of the site of crossing with wire and a balloon through the side of a stent to the side-branch. Crossing to the side-branch with a wire and balloon through a distal cell close to the carina (A) produces better clearance of struts from the ostium (B) compared with crossing through a proximal cell. Usually the operator has little control over the site of crossing. 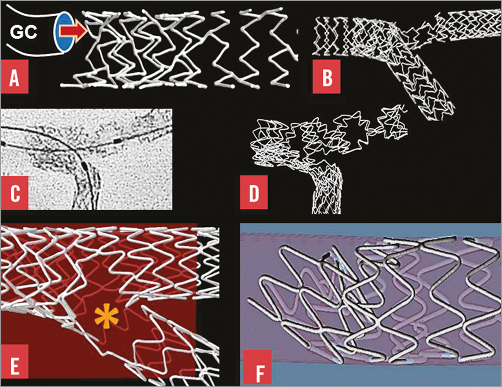 Figure 2. Bifurcation stenting and longitudinal stent deformation. A) A stent with two connectors between hoops was compressed by a guide catheter (GC) in a simulated left main coronary artery. B) A wire passed outside the main branch stent then re-entered the lumen. A balloon passing over that wire caused marked distortion on inflation. C) & D) This stent with two connectors between hoops was distorted by post-dilatation balloons. E) There was separation of stent struts (asterisk) with reduction in vessel support and antiproliferative drug application in this stent with only one connector between hoops. F) Compression of hoops, malapposition and obstruction were caused by a post-dilating balloon applying force to a proximal stent hoop.

Following clinical reports of longitudinal stent distortion14-17 and our bench observations in bifurcations (Figure 2), we identified that stents with only one or two connectors between hoops were more easily distorted than those with more18. We proposed additional connectors between the proximal hoops of the Element™ stent design (Boston Scientific, Marlborough, MA, USA) where distortion was most common18. We subsequently showed that the Premier™ stent (Boston Scientific), which is the same as the Element but with additional connectors between proximal hoops, has a reduced potential for longitudinal distortion19. The mechanism of marked distortion of a stent that was not visible on angiography is shown step-by-step in Online Figure 3. A wire had passed from the lumen of a main branch stent to lie outside the stent for a short distance before it re-entered the lumen. Inflation of a balloon following this wire caused the distortions (Online Figure 3). 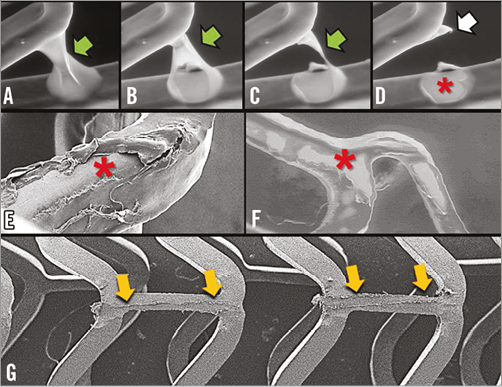 Online Figure 4 shows how balloon post-dilatation technique improves SB ostial metallic stenosis with the “crush” technique and how large gaps between stent struts can result when a balloon is inflated over a wire that has passed outside a stent and re-entered a lumen20. Bench testing can assist appropriate post-dilatation balloon size in, for instance, post-dilatation of stents deployed in the left main coronary artery21.

Drug-eluting stent (DES) polymer coating integrity can be studied by environmental scanning electron microscopy (Figure 3). With one first-generation DES design, polymer webs between adjacent struts may break, leaving areas bare of polymer and redundant polymer coating (Figure 3). In a different first-generation DES, regions of damaged polymer appear related to the deploying balloon (Figure 3). While withdrawal of a 0.014”coronary guidewire trapped between a stent and a mock vessel wall during a provisional SB stenting strategy may damage the polymer coating, the damage is relatively small so unlikely to cause adverse events (Figure 3).

Stent strut fracture which may occur with bifurcation stenting, especially with multiple stents, may lead to adverse clinical events22-24. We submitted six contemporary stent designs (n=15 of each design) to a repetitive bending test (Figure 4) and found that the BioMatrix Flex™ (Biosensors International, Singapore) stents all fractured between 10 and 100 thousand cycles, all the Vision® and Multi-Link 8™ (Abbott Vascular, Santa Clara, CA, USA) fractured between 100 thousand and 1 million cycles, and the Element and Premier (Boston Scientific) together with the Integrity design (Medtronic, Santa Rosa, CA, USA) did not fracture up to 10 million cycles (Figure 4)25.

Figure 4. Mean and SD of number of bend cycles to fracture for the six stent designs (n=15 of each) tested. The BioMatrix Flex was the most readily fractured and the Omega/Element, Premier and Integrity did not fracture. Panel A summarises the testing method where one end of a stent was fixed and the other moved to flex the stent by 13º. Red arrows indicate the ends of a fractured strut. The red arrows in panel B indicate ends of a fracture and the blue arrow damaged polymer26. Modified from EuroIntervention, 2014 Nov 25 (Epub ahead of print), Ormiston et al26. Coronary stent durability and fracture: an independent bench comparison of six contemporary stent designs using a repetitive bench test. Copyright 2014 with permission from Europa Digital & Publishing.

Obstructed balloon passage to side branch

Bench testing shows causes of obstructed balloon passage from lumen to side branch.

Causes of obstruction include a balloon tip catching on the strut of a complex shaped cell, a coronary guidewire passing outside a strut and balloon catheter tip damage (Figure 5). Solutions to obstruction include re-wiring the SB hoping to cross through a different site in the stent, repeat post-dilatation up to the carina and using a new balloon.

Our first phantoms were troughs cut in a perspex plate7. These secured the stent suboptimally during deployment and post-dilatation. Because there was no phantom material between the camera and stent, there was no light image distortion, and high-resolution images could be obtained. However, these phantoms were rigid, non-circumferential and very unlike a flexible, distendible tubular coronary artery1.

MicroCT allows phantoms to be made of a wide range of materials as they do not have to be transparent to allow conventional photography. For microCT imaging, initially we deployed stents in silicone block phantoms made by casting silicone over a metallic model of a bifurcation. Whilst these had radial flexibility compared with perspex, they did not have the longitudinal flexibility of a coronary artery. In addition, it was difficult to build anatomically accurate phantoms by casting.

We expect that bench testing information will improve with the use of more anatomically accurate phantoms. We used over 300 CT coronary angiograms to generate a statistical atlas of coronary anatomy with the aim of 3D printing anatomically correct phantoms. The relationship between the branch diameters follows Murray’s Law10,26. Materials used for 3D printing can have physical characteristics similar to those of coronary arteries and could be printed with stenoses.

We are comparing computer models of coronary flow with measurements of actual flow in an upsized physical model constructed according to Murray’s Law10 using magnetic resonance.

Bench testing has provided considerable insight into stent deployment and how different techniques might impact on clinical outcomes. Bench testing is essential to support the safety and effectiveness of coronary stents and their delivery systems. It can provide critical information on stenting techniques, how a device works, and whether there are likely to be concerns about device function, and it may predict clinical outcomes. 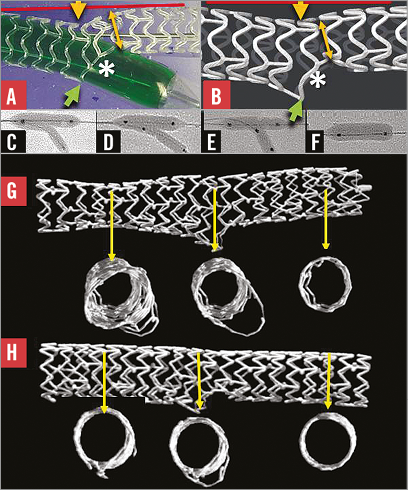 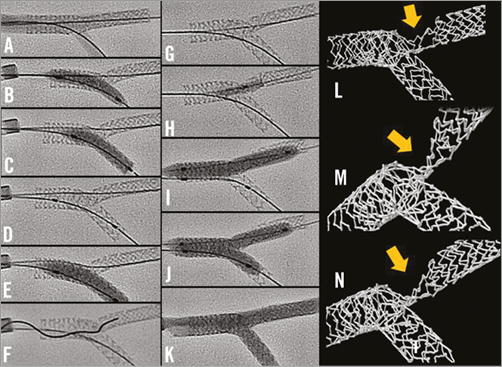 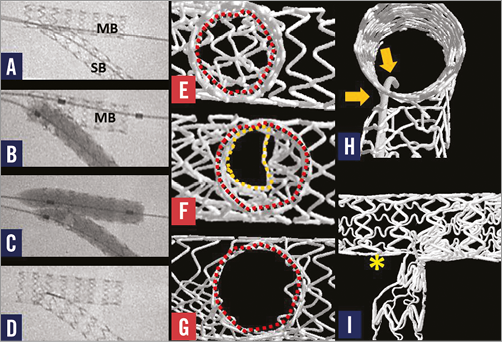 Moving image 1. The site of maximum dilatation and symmetry of stent expansion with conventional KBPD varies greatly11 because of the variability in how the balloons wrap around each other.