We describe the first use of transradial access renal denervation in a patient with resistant hypertension using a dedicated radiofrequency catheter (Iberis™; Terumo Medical Corporation, Tokyo, Japan). The system includes a generator and a 4 Fr single-use radiofrequency (RF) device which has to be introduced via a 6 Fr guiding catheter. Radiofrequency energy is delivered at the tip of the catheter. The system was CE approved in March 2013.

We report the case of a 76-year-old male patient (weight 84 kg and height 172 cm, body mass index of 28 kg/m2) with a past history of severe resistant hypertension. His hypertension had been diagnosed 15 years ago and, despite the use of four antihypertensive drugs (olmesartan 40 mg/day, thiazides 25 mg/day, isoptine 240 mg/day, nicardipine 40 mg/day), he experienced resistant hypertension. He was known to have had a previous lacunar stroke localised at the level of the left internal capsule leading to pure motor hemiparesis. He recovered completely from his stroke without neurologic sequelae. No cardiac, ophthalmologic or renal damage was identified (normal EF: 70% and glomerular filtration rate of 79 ml/min/1.73 m2 using the Modification of Diet in Renal Disease [MDRD] formula). According to recent guidelines1, secondary causes of hypertension were excluded and the patient was referred for a sympathetic renal denervation procedure.

His mean office blood pressure was 160/90 mmHg, despite being exposed to four antihypertensive drugs. The mean home-based blood pressure was 161/94 mmHg, and mean 24-hour ambulatory blood pressure monitoring (ABPM) was 151/92 mmHg (diurnal 163/99 mmHg, nocturnal 146/87 mmHg). He experienced a stroke attributable to lack of BP control. Given these features and taking into account recent guidelines2 the patient had an indication for renal denervation.

A CT scan excluded renal artery abnormalities, renal stenosis and renal aneurysms. Both arteries had a minimal length of 20 mm and a diameter above 4 mm. We decided to perform this procedure using the radial approach (Table 1). 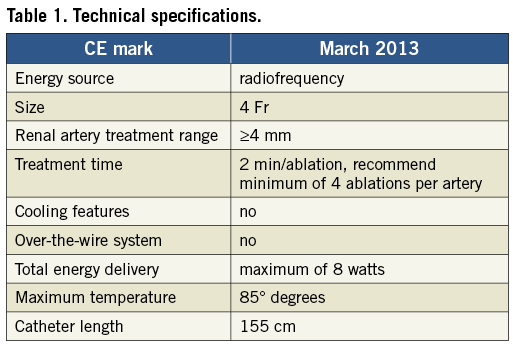 Using a new radial 6 Fr introducer sheath (Glidesheath Slender™; Terumo Medical Corp.), we performed a selective angiography of each renal artery with a 135 cm long guiding catheter with a multipurpose curve (Climber™; Terumo Medical Corp.) The length is appropriate to reach the renal artery from a radial access. The multipurpose curve is the most appropriate to perform renal artery engagement when the aorto-renal angle varies from horizontal to acute, thus allowing good coaxiality and strong support for the procedure. Moreover, the hydrophilic coating allows a better progression through a long and tortuous arterial access.

The Iberis™ system is an unipolar electrode catheter with a 155 cm long shaft and a flexible tip of 12 mm. This non-occlusive device uses a single unipolar electrode on the tip of the catheter to create a spot lesion using RF energy (Figure 1). The device is a non-over-the-wire system and has been designed for radial access. The shaft of the catheter is made of nitinol allowing a good progression through arterial tortuosity with high torquability. The device is connected to a handle with which you can rotate and flex the tip of the catheter. Contact with the arterial wall is achieved by deflexion of the tip by pushing the lever on the handle. As previously described, the pattern of denervation should be helical with a 5 mm distance between two spots of ablation. The helical pattern is assessed by a manual rotation of the handle. There is no cooling mechanism during the procedure and the electrode generates a temperature of up to 60° Celsius with an 8-watt energy delivery level for a two-minute ablation point.

The patient underwent RDN via the right transradial access with a pattern of ablation similar to the procedure reported by the SYMPLICITY investigators3 (i.e., helical pattern of spot denervation) using the dedicated transradial access Iberis™ Renal Sympathetic Denervation System (Terumo Corp.) for the first time.

In the present case, renal denervation was performed at eight points in the right renal artery and five in the left renal artery trunk (Figure 2A, Figure 2B). We did not perform OCT but no clear angiographic signs of dissection of thrombus were observed (Figure 3). The procedure was conducted under general anaesthesia and a bolus of 4,000 units of heparin was injected at the beginning of the procedure. Both the coaxiality of the MP guiding catheter and the flexibility of the curved tip allowed a stable position of the catheter during ablation. There were no prematurely interrupted RF applications. The total procedure time was 53 minutes and the amount of contrast medium used was 120 ml.

Figure 2. Features of denervation point pattern in right (A) and left (B) renal artery. 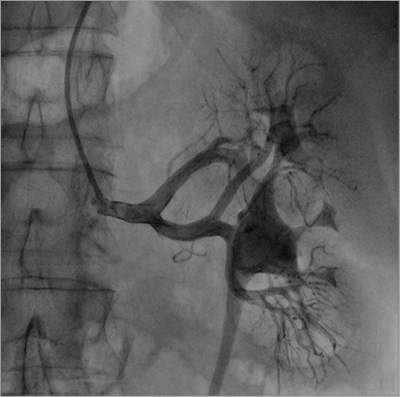 Figure 3. Final left renal artery angiography. No evidence for arterial dissection or thrombus after the procedure at five denervation points with a helical pattern.

The patient was discharged the day following the procedure without any complications. Clinical follow-up 15 days after RDN showed a decrease of office-based blood pressure to 145/80 mmHg without any changes in his drug regimen.

Renal denervation is a novel approach for the management of resistant hypertension2,3. This case underlines the feasibility and safety of a novel arterial approach based on radial access. Knowing the safety of the radial approach in the field of coronary interventions4, this alternative to the femoral access has the potential of an enhanced benefit/risk ratio. Moreover, this novel technique could have additional benefits for anatomical variations (e.g., acute aorto-renal angle) or for complicated femoral access5. Finally, a left radial approach could be even safer. Indeed, during diagnostic coronary angiography it has been shown that the left radial approach has a lower risk of brain embolisation than the right radial access6. It may be hypothesised that the left approach could be less deleterious than the right for the reasons stated above, since in the case of renal denervation the left approach will not pass through the aortic arch. Moreover, the left approach can avoid difficulties of catheter progression through an elongated aortic arch.

In conclusion, the availability of a dedicated radial radiofrequency renal denervation catheter expands the possibilities of being able to treat patients with similar efficacy to a femoral catheter, but probably with fewer expected complications. This needs to be further confirmed in ongoing trials such as the one stated in recent literature7.