Methods and results: All TAVI patients implanted up to September 2012 with a minimal theoretical five-year follow-up were included. Systematic clinical and echocardiographic follow-up was performed annually. New standardised definitions were used to assess durability of transcatheter aortic bioprosthetic valves. From 2002 to 2012, 378 patients were included. Mean age and logistic EuroSCORE were 83.3±6.8 years and 22.8±13.1%. Thirty-day mortality was 13.2%. Nine patients had SVD including two severe forms and two patients had definite late BVF. The incidence of SVD and BVF at eight years was 3.2% (95% CI: 1.45-6.11) and 0.58% (95% CI: 0.15-2.75), respectively.

Conclusions: Even though limited by the poor survival of the very high-risk/compassionate early population, our data do not demonstrate any alarm concerning transcatheter aortic valve durability. Careful prospective assessment in younger and lower-risk patients and comparison with surgical bioprosthetic valves are required for further assessment of the long-term durability of transcatheter valves.

Transcatheter aortic valve implantation (TAVI) is an established treatment for severe symptomatic aortic stenosis (AS) in patients deemed to be at high risk of surgical mortality or who are not suitable for surgery1. Improved devices and strategies, better patient selection and increased operator experience have made the procedure easier and safer2-6. Recent studies, PARTNER 2A6, PARTNER 2S37 and SURTAVI8, demonstrated non-inferiority6,8 or superiority7 of TAVI in comparison to surgery in intermediate-risk patients. Subsequently, a new indication was recently adopted for intermediate-risk patients in the 2017 revised US and European Guidelines1,9. Extension of TAVI to lower-risk patients is already in the pipeline with large ongoing randomised trials examining the value of TAVI in younger patients without major comorbidities: PARTNER 3 using the SAPIEN 3 (Edwards Lifesciences, Irvine, CA, USA) device, Medtronic Transcatheter Aortic Valve Replacement in Low Risk Patients using the CoreValve (Medtronic, Dublin, Ireland), NOTION-2, and UK TAVI trials. TAVI is currently at an explosive stage of expansion and, among the remaining issues, the question of long-term durability remains paramount. Some five-year data from the randomised PARTNER 1 trial10 indicate no evidence of premature structural valve deterioration (SVD) but long-term data >5 years are lacking. Very recently, standardised European definitions of SVD and bioprosthetic valve failure (BVF) in assessing long-term durability of transcatheter and surgical aortic bioprosthetic valves have been proposed11. Here, we aimed to assess SVD and BVF of balloon-expandable bioprosthetic aortic valves using the new definitions in a series of consecutive patients treated up to September 2012 and followed annually by echocardiography.

From April 2002 to September 2012, 378 consecutive patients had a balloon-expandable TAVI procedure performed in our university hospital centre. All patients were prospectively included in trials and registries. Systematic clinical and echocardiographic follow-up was performed on site in all patients at one month, one year and yearly thereafter. Whenever impossible on site, data were obtained from the referent cardiologist or at the patient’s residence. The last available echocardiographic evaluation was considered for analysis of non-fatal events. Very few of the 378 patients were lost to follow-up (five only for clinical follow-up and six for echocardiographic follow-up, including four from abroad).

All patients had severe symptomatic AS and had given their signed informed consent to participate. Inclusion criteria were: 1) from 2002 to 2004, patients treated for compassionate reasons, 2) from 2004 to 2012, patients considered inoperable or at high risk. The number of patients was limited on a yearly basis due to the scarce availability of the TAVI device related to the absence of reimbursement, to French regulations and strict eligibility criteria to be included in protocols.

All transfemoral procedures were performed using local anaesthesia and fluoroscopic guidance. A transseptal approach was mainly used in the first 40 patients, a retrograde transfemoral arterial approach using surgical cutdown until December 2009 and percutaneous closure (Prostar® XL; Abbott Vascular, Santa Clara, CA, USA) thereafter. Procedures have been described in detail previously12,13. Different types of valve were used: Percutaneous Valve Technologies (23 mm, 2002-2004), Cribier-Edwards (23 mm, 2004-2005), SAPIEN (23 and 26 mm, 2006-2009) and then SAPIEN XT (23 and 26 mm, from 2009, and 29 mm from 2012), the last three all by Edwards Lifesciences. The transapical approach became available in 2006.

BVF can be categorised as definite (i.e., autopsy, reintervention, severe haemodynamic SVD) or probable (i.e., valve-related death), and as early (i.e., up to 30 days) or late (i.e., >30 days) according to the timing of onset after valve implantation11.

Baseline and procedural characteristics are presented in Table 1 and Table 2. Mean age was 83.3±6.8 years and 45.9% were male. Patients were highly symptomatic, 75.1% in New York Heart Association (NYHA) Class III/IV, and they had severe and multiple comorbidities with a mean logistic EuroSCORE of 22.8±13.1%. Aortic stenosis was severe with an effective orifice area (EOA) of 0.68±0.19 cm² and a mean gradient of 49.8±16.6 mmHg. All devices used were balloon-expandable (Table 2). A transfemoral approach was used in 80.4% of cases and transapical in the others. Mean gradient decreased to 9.7±3.3 mmHg and EOA increased to 1.8±0.3 cm². Moderate/severe AR was present in 20 patients (5.6%) and severe AR in 2 (0.6%). Thirty-day mortality was 13.2%. Major complications are presented in Table 2. 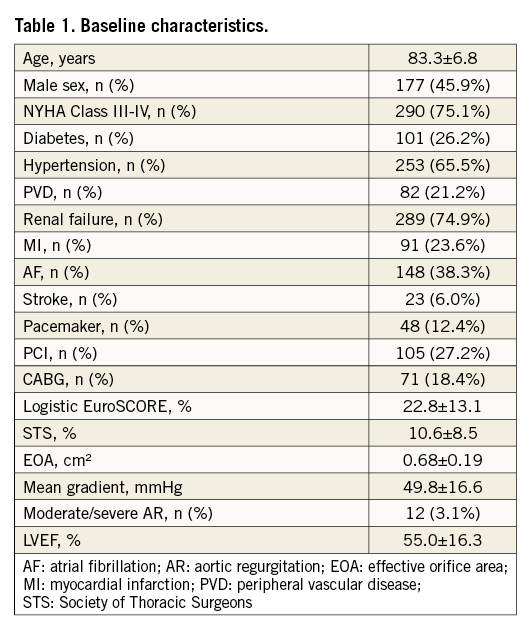 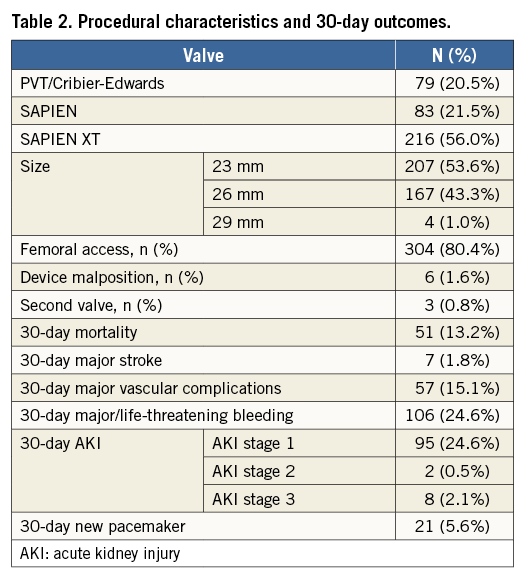 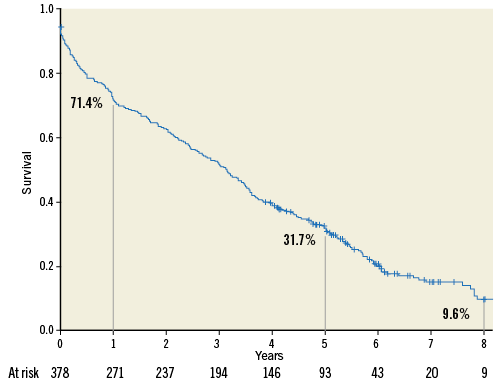 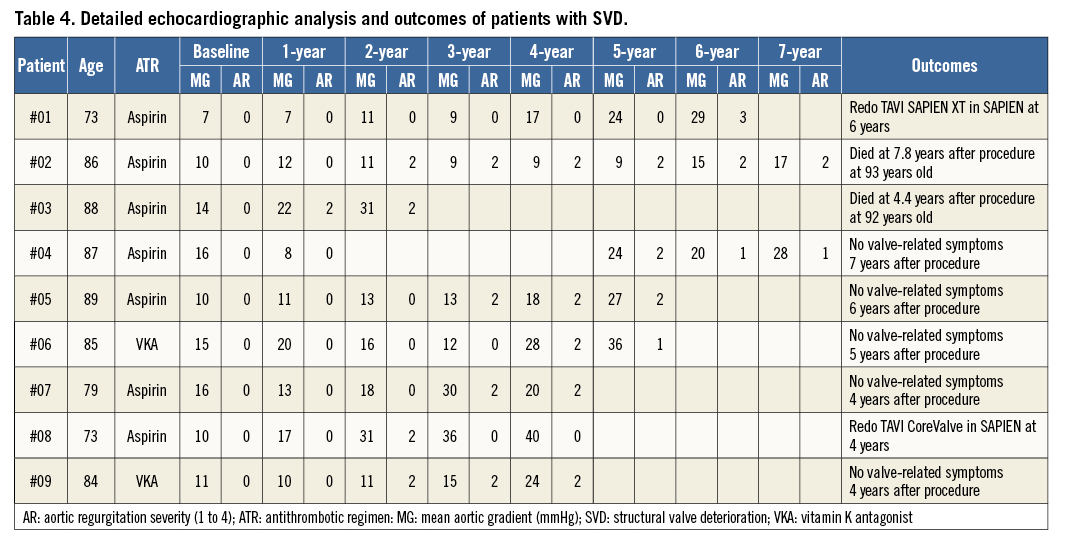 Interestingly, one of our patients has now reached 11-year follow-up without any sign of SVD, as demonstrated by clinical and echocardiographic evaluation performed by our team in 2017 at the patient’s home.

In the absence of long-term data on transcatheter valve durability (>5 years), we aimed to evaluate the outcomes and durability of TAVI in a prospective series of patients followed annually for up to 11 years and beyond using recent SVD standardised definitions. Our study demonstrated a very low rate of SVD and BVF after TAVI. Indeed, only nine patients had SVD and two patients had definite late BVF.

Importantly, our study is the only study 1) able to provide long-term follow-up on TAVI with patients included since 200214 from the first-in-man TAVI procedure and reporting up to 11-year follow-up (the first in Europe) and 2) using the new recent European definitions to define SVD.

While the risk of SVD in an elderly high-risk population should be weighed against the benefit of a less invasive procedure, durability represents one of the remaining major issues of TAVI at a younger age and in lower-risk patients, a population currently under evaluation in large randomised trials (PARTNER 3, Medtronic Transcatheter Aortic Valve Replacement in Low Risk Patients using the CoreValve, NOTION-2, and UK TAVI trials).

Data on durability are currently very limited which is inherent to a young technique, the characteristics of the population treated in the early years and the relatively recent worldwide adoption of TAVI.

The randomised PARTNER 1 trial compared SAVR and TAVI (SAPIEN device) up to five years10 and reported similar haemodynamic results between SAVR and TAVI and no increase in mean gradient over five years in a limited number of patients at risk. Two registries15,16 have reported five-year outcomes: these did not demonstrate any major concerns regarding durability in the short and/or medium term. These registries reported a rate of SVD of 3.4% and 4.2%, respectively, using different definitions and with few patients at risk. Of note, preliminary analysis of pooled data from our centre and Vancouver presented during EuroPCR 2016 overestimated the incidence of SVD. The main limitation was the definition used for SVD in this preliminary analysis. First, any aortic regurgitation (i.e., intravalvular and paravalvular) greater than or equal to grade 2 was considered as SVD, whereas paravalvular regurgitation is now clearly defined as non-structural valve deterioration. Second, any elevation of mean aortic gradient was also considered as SVD, whereas it is now specified in the consensus that it must be compared with baseline values obtained before discharge or 30 days after the procedure.

In contrast, SVD is a well-known risk associated with surgical bioprosthesis. Several large series have evaluated long-term survival and survival without reintervention. In a large series evaluating 2,405 bovine Carpentier-Edwards bioprostheses18, survival without reintervention was 98±0.2%, 96±1%, and 67±4% at 5, 10, and 20 years, respectively. In the Bourguignon series19 evaluating 2,758 Carpentier-Edwards Perimount bioprostheses (Edwards Lifesciences) using clinical and echocardiographic evaluation, SVD determined by strict echocardiographic assessment was reported in 157 patients on a cumulative follow-up of 18,404 valve-years. Of these, 123 underwent reoperation. All cases of SVD were late events. Actuarial freedom from SVD at 15 and 20 years was 78.6±2.2% and 48.5±4.6%, respectively. In the series by Johnston et al20 assessing SVD in 12,569 patients (81,706 patient-years), actuarial estimates of explant for SVD at 10 and 20 years were 1.9% and 15% overall. Surgical results are excellent in the long term in well evaluated bovine and porcine Hancock devices21 but others such as Mitroflow (Sorin [now LivaNova], Milan, Italy)22 have failed to demonstrate such durability, underlining the need to evaluate new devices and in particular transcatheter devices. Transcatheter devices have the specificity of combining a stent and a bioprosthesis either crimped on a balloon or contained within a catheter before deployment. Even though no data are currently available, few in vitro studies suggest mechanisms for inferior durability of THV devices23-25. After crimping and ballooning, the structure of the pericardium has been shown to be injured23. Non-circular deployment of the stent has also been described and could potentially lead to suboptimal coaptation of the leaflets and a possible association with increased risk of SVD24. Moreover, it has been shown in a fatigue simulation study that transcatheter aortic valve leaflets sustain higher stresses, strains, and fatigue damage compared to the surgical aortic valve leaflets25.

To address this question and compare durability between devices, there is a need for a definition of SVD not limited to survival without reintervention as used by the surgeons but rather a more precise and universal enabling evaluation of SVD across ongoing registries and studies and comparing surgical and transcatheter valves. Very recently, standardised definitions of structural deterioration and valve failure in assessing long-term durability of transcatheter and surgical aortic bioprosthetic valves have been proposed by the European Association of Percutaneous Cardiovascular Interventions (EAPCI) endorsed by the European Society of Cardiology (ESC) and the European Association for Cardio-Thoracic Surgery (EACTS)11. Bioprosthetic valve dysfunction is now classified as SVD, non-structural valve deterioration (paravalvular AR, prosthesis malposition, mismatch, embolisation), thrombosis, or endocarditis with a crucial role of imaging techniques. It is emphasised that echocardiography should be routinely performed early after TAVI (i.e., at 30 days) and for annual follow-up of all patients with bioprostheses26. Nevertheless, transthoracic echocardiography (TTE) presents certain limitations and is not always able to discriminate between central and paravalvular AR or between SVD and valve thrombosis in the presence of an elevated gradient27. These patients may require further investigation using multidetector computed tomography (MDCT) to overcome the limitations of TTE to provide anatomical and structural information.

The results of our study are limited by the sample size of a single centre and the low survival rate of this compassionate/high-risk population. Currently, the assessment of long-term SVD is almost impossible in the compassionate/high-risk population treated in the early TAVI era with very high mortality rates. Furthermore, there was no independent echocardiographic core lab in our study. Finally, it is well known that it may be difficult to differentiate SVD from other causes of bioprosthetic valve dysfunction, particularly valve thrombosis. We may therefore have overestimated the incidence of SVD since we did not confirm systematically the absence of valve thrombosis by multislice computed tomography. Despite these unavoidable limitations, our careful clinical and echocardiographic annual assessment brings important information and emphasises the importance of a universal definition of SVD for both surgical and transcatheter bioprostheses with prospective long-term assessment of all TAVI patients and using a standardised definition.

The durability of transcatheter valves is a major topic for discussion in the current context of extending indications to lower-risk and, in particular, younger patients. Our data, despite a limited number of patients at risk due to the unavoidable low survival rate of our compassionate/very high-risk population, are of potential interest concerning the issue of durability. Additional studies are required to evaluate SVD further in larger series including younger patients with longer survival and using standardised follow-up and definitions.

The authors are grateful to Nikki Sabourin-Gibbs, Rouen University Hospital, for her help in editing the manuscript.