Angiographic complexity of coronary artery disease according to SYNTAX score and clinical outcomes after revascularisation with newer-generation drug-eluting stents: a substudy of the BIOSCIENCE trial

Aims: We sought to assess the performance of drug-eluting stents combining an ultrathin cobalt-chromium platform with a biodegradable polymer across categories of increasing SYNTAX score (SS).

Methods and results: Patients included in the BIOSCIENCE trial and randomly allocated to treatment with biodegradable polymer sirolimus-eluting stents (BP-SES) or durable polymer everolimus-eluting stents (DP-EES) were categorised according to SS tertiles (low <8, medium 8-15, high >15). The primary endpoint, target lesion failure (TLF), was defined as a composite of cardiac death, target vessel myocardial infarction and clinically indicated target lesion revascularisation. The patient-oriented endpoint (POCE) included death, myocardial infarction, or any repeat revascularisation. The SS was available in 2,041 out of 2,119 patients (96.3%). At two-year follow-up, patients with an SS >15 experienced higher rates of both TLF and POCE as compared to patients with medium and low SS (14.5% vs. 8.1% and vs. 5.9%, p<0.001; 22.7% vs. 14.9% and vs. 12.4%; p<0.001), respectively. Comparable rates of the composite endpoints were documented for both stent types in each category of SS.

Conclusions: Increasing lesion complexity as assessed by SS was associated with higher rates of TLF and POCE in a contemporary PCI population with minimal exclusion criteria. BP-SES and DP-EES showed comparable performance across the entire spectrum of CAD severity.

Originally conceived as a scoring system for angiographic extent and complexity of coronary artery disease (CAD)1, the SYNTAX score (SS) has been correlated with the risk of adverse events after percutaneous coronary intervention (PCI) in patients receiving early- and new-generation drug-eluting stents (DES)2-4.

Refinements of the platform and the design of DES facilitated the treatment of increasingly complex CAD. Improved deliverability achieved by a reduction of strut thickness was paralleled by a decline of ischaemic events using biocompatible und biodegradable polymers5.

The effect of an ultrathin strut stent design in combination with a biodegradable polymer on clinical outcome according to SS is unknown.

In the present substudy of the BIOSCIENCE trial, we sought to explore whether the predictability of the SS is confirmed in a contemporary PCI population and whether the complexity of CAD, as assessed by SS, differentially affects clinical outcomes up to two years after PCI with BP-SES or DP-EES. Furthermore, we evaluated the performance of the logistic clinical SS, which combines anatomical SS with clinical features7, to predict survival in a contemporary PCI population.

The BIOSCIENCE trial was an investigator-initiated, multicentre, single-blind, randomised non-inferiority trial including patients with stable CAD and acute coronary syndromes (ACS) who were candidates for stenting. The trial design and criteria for inclusion and exclusion have previously been described8. The study complied with the Declaration of Helsinki. Written informed consent was mandatory for study inclusion. The study protocol was approved by the ethics committees of all participating centres. After diagnostic angiography, patients were randomly allocated (1:1) to treatment with BP-SES or DP-EES using a web-based system. All patients were clinically followed up at 30 days, 12 and 24 months.

The primary endpoint of this sub-analysis was the occurrence of target lesion failure (TLF), defined as a composite of cardiac death, target vessel Q-wave or non-Q-wave myocardial infarction (MI) and clinically indicated target lesion revascularisation (TLR). Secondary endpoints were a patient-oriented composite endpoint (POCE), including death, MI, or any repeat revascularisation, the individual components of the composite primary endpoint, and Academic Research Consortium (ARC)-defined stent thrombosis (ST). Endpoint definitions have been provided elsewhere6.

Calculation of SS, logistic clinical SS and statistical analysis are described in the Appendix.

Baseline parameters were well balanced between the two treatment arms across SS tertiles, except for a significantly higher number of previous cerebrovascular events among patients with medium SS in the DP-EES arm as compared to the BP-SES arm (7.3% vs. 3.5%, p=0.04) (Table 1). Angiographic features and procedural data are reported in Table 2. 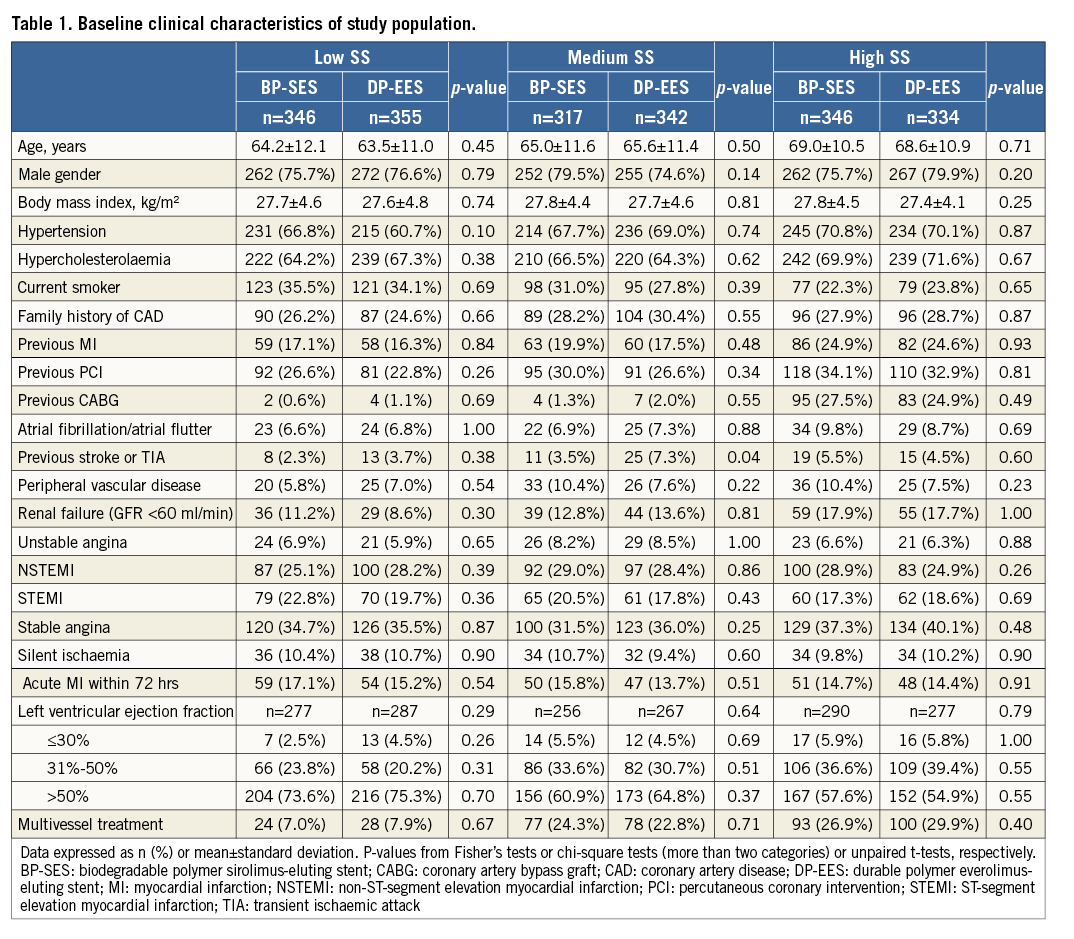 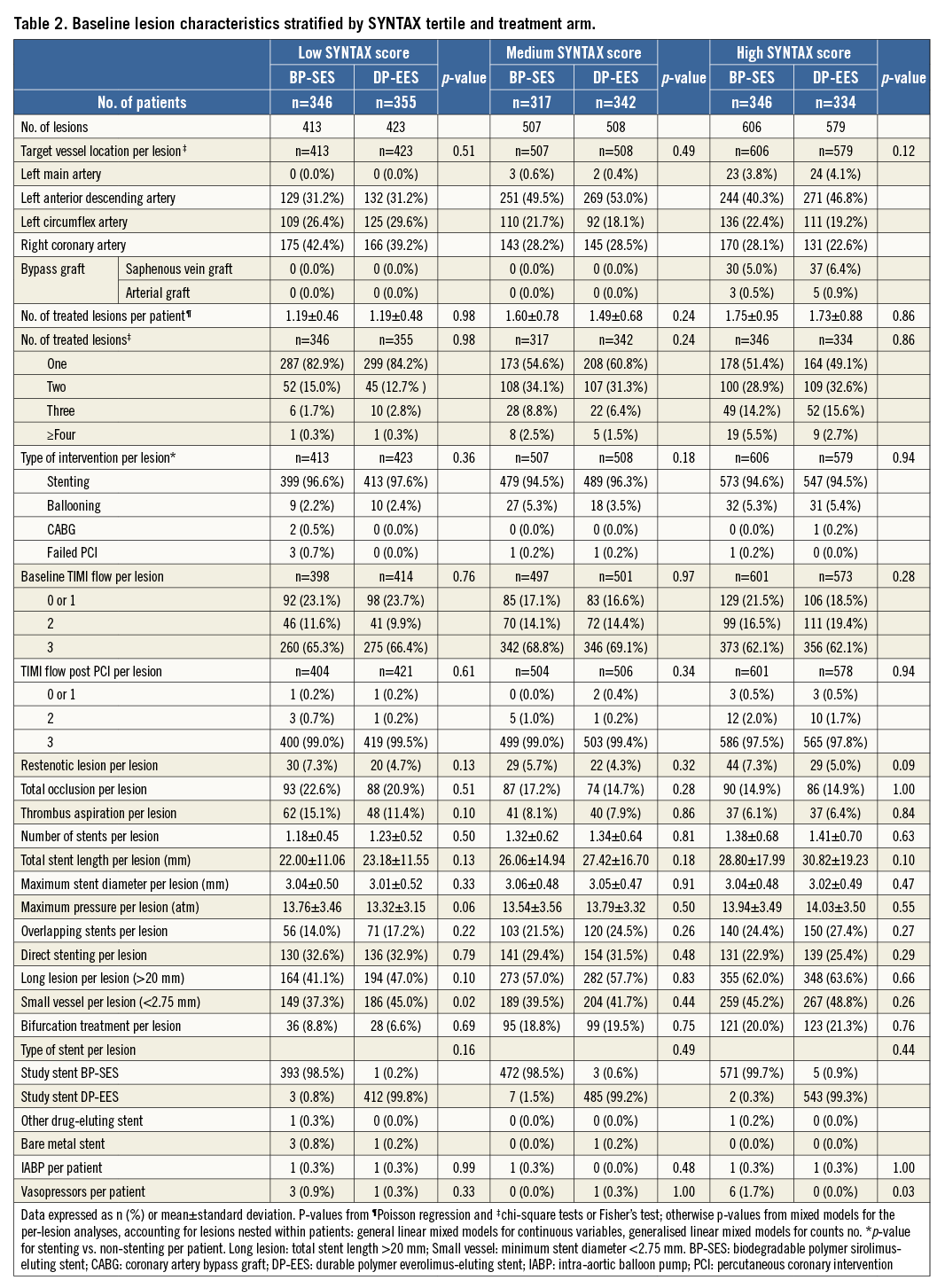 CLINICAL OUTCOMES ACCORDING TO CAD COMPLEXITY 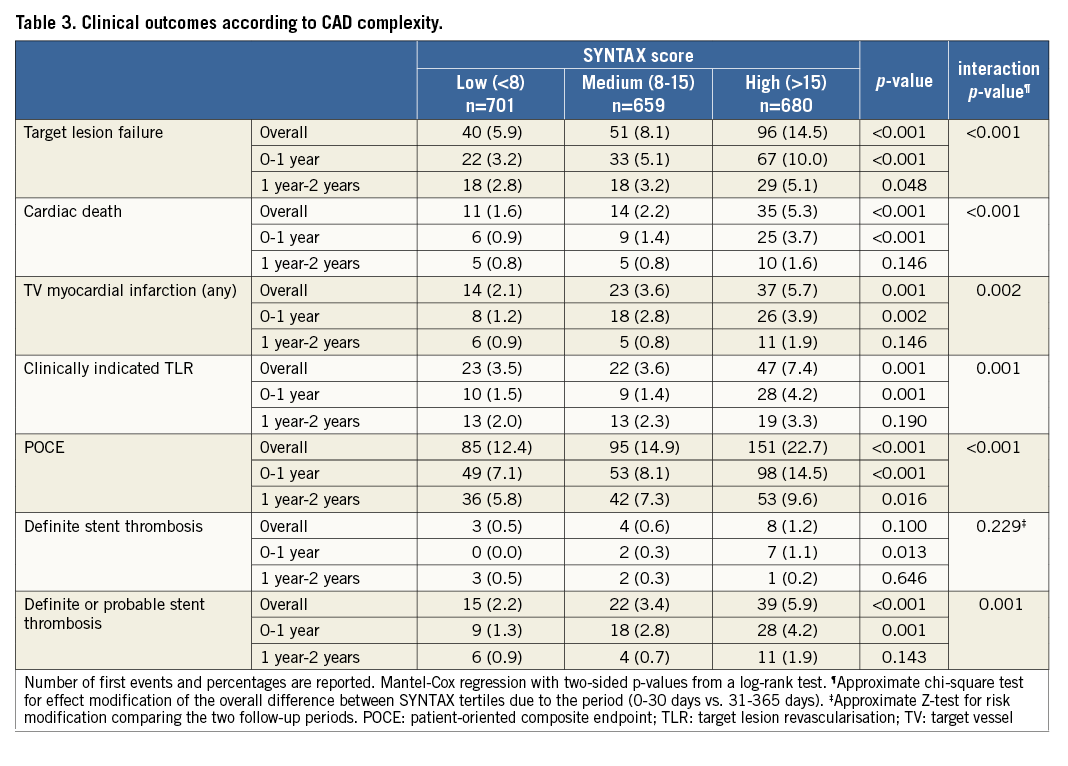 CLINICAL OUTCOMES ACCORDING TO STENT TYPE ACROSS SS TERTILES 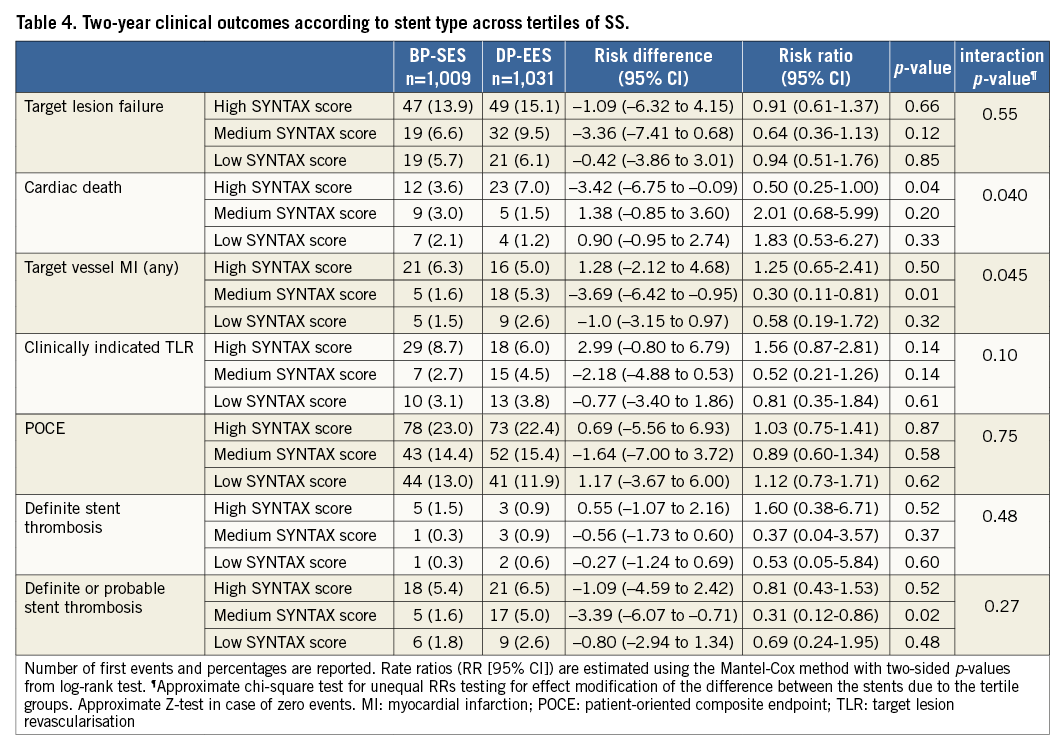 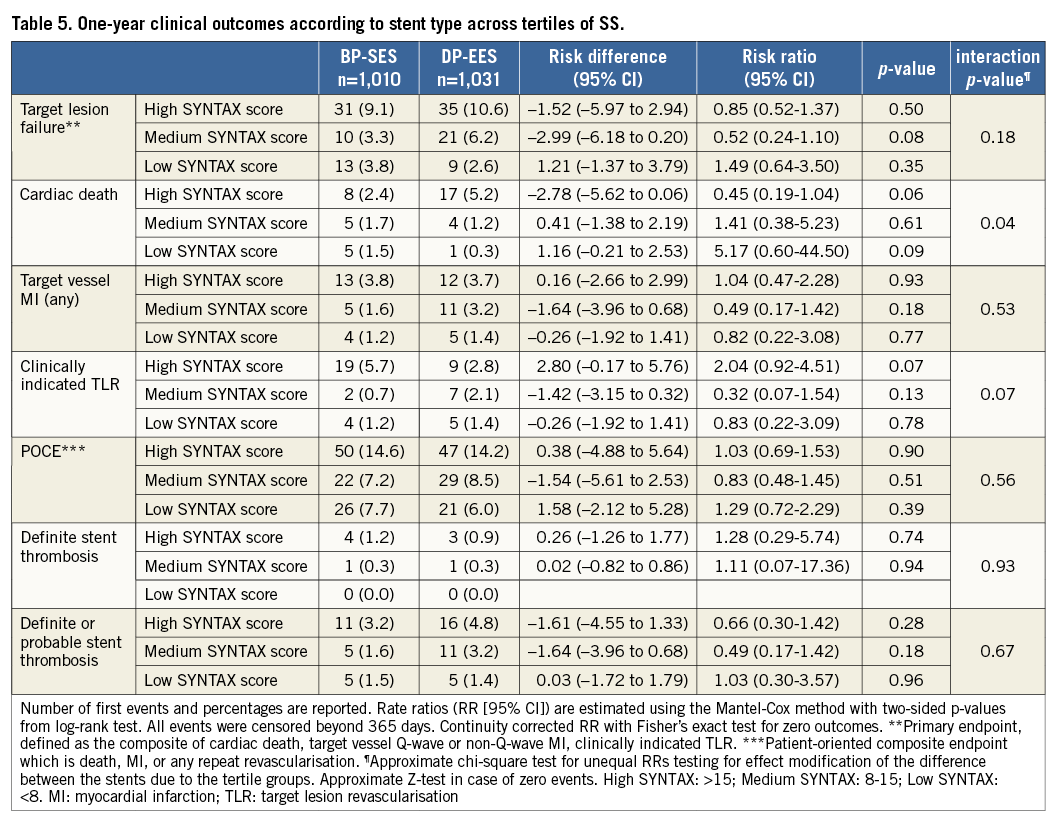 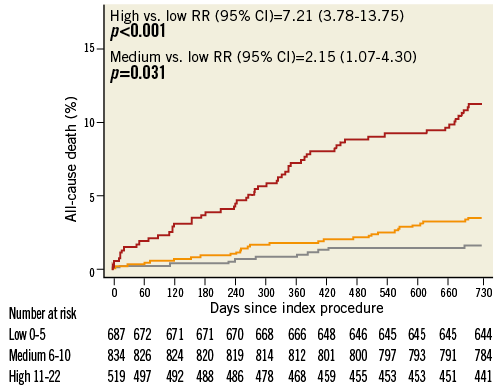 Figure 4. Performance of the logistic clinical SS. A) Area under the curve and discrimination measures. B) Calibration plots. The triangles indicate the observed frequencies by quintile of predicted probabilities.

The main findings of the present study are the following:

1. The predictive value of the SS is confirmed among patients undergoing PCI with new-generation DES.

2. BP-SES and DP-EES perform similarly across the entire spectrum of CAD complexity throughout two years of follow-up with regard to a lesion-oriented and a patient-oriented composite endpoint. Differences in individual endpoints across SS categories need to be evaluated in larger studies.

After its introduction as an angiographic instrument to grade the extent and severity of CAD1, the SS proved to be an effective predictor of clinical outcomes in several settings. Specifically, the paradigm relating high anatomic complexity (higher SS) with higher rates of adverse ischaemic events has been validated in patients undergoing PCI with early- and newer-generation DES9-11. In an ad hoc analysis of the RESOLUTE All Comers trial, the SS was identified as an independent predictor of adverse ischaemic events, with patients in the highest SS tertile experiencing higher rates of POCE, TLF, MI, repeat revascularisation and ST3. Similarly, major cardiac event-free survival was lower for patients in the LEADERS trial in the highest tertile of SS2. The present study confirms the prognostic value of the SS by documenting higher mortality and higher risk of adverse events among patients with SS >15. The validation of such a predictive role in a real-world population mirroring the currently increasing gradient of complexity for lesions and patients receiving DES supports the utility of implementing its use in current clinical practice.

Nevertheless, differences in the occurrence of the individual components of the primary endpoint have been detected within medium and high SS tertiles. We acknowledge that this subgroup analysis is underpowered and the observed results could be a play of chance, requiring a cautious interpretation. Indeed, the higher rates of target vessel MI and ST in patients with medium SS receiving DP-EES were not accompanied by a significantly increased rate of cardiac death. Moreover, there is no obvious explanation for higher rates of cardiac death among patients in the high SS tertile receiving DP-EES. A similar variability in the ability of SS to predict individual major outcomes has previously been pointed out3,12. It could be a consequence of the fact that the score includes several angiographic variables differentially affecting specific clinical endpoints. For example, the lesion length can be related to the occurrence of TVR whilst the disease of proximal vessels could be associated with sudden cardiac death14. On the other hand, it could be speculated that the peculiar features of the devices are responsible for the diverging outcomes. In this regard, the Orsiro stent represents the latest iteration of stent technology, featuring an ultrathin strut design with a biodegradable polymer aiming to overcome the safety issues of second-generation DES. Its safety and efficacy profile was reassuringly preserved in high-risk groups such as diabetic patients15. Moreover, a beneficial effect of BP-SES over DP-EES has been advocated in patients presenting with STEMI16. However, the limited numbers of patients included in the previous and current analyses prevent us from establishing definitely the effect of the refined stent design and biodegradable polymer on prognosis.

Although this study was mainly focused on the performance of BP-SES and DP-EES across the spectrum of coronary anatomy complexity, we additionally assessed the ability of the logistic clinical SS to predict two-year mortality after PCI. To the best of our knowledge, this analysis represents the first external validation of this score. We found a good performance in terms of discrimination and calibration. Notably, the Harrell’s C-statistic observed in our study (0.73) perfectly matched with the c-index in the derivation cohort (0.73), further corroborating the clinical utility of the logistic clinical SS.

The present analysis has several limitations. First, the sub-analysis was not pre-specified, and numbers are modest, compromising particularly the robustness of individual endpoint analyses. Second, the SS was evaluated retrospectively. However, assessors were blinded to the treatment arm and clinical outcomes, and inter- and intra-rater variability of calculated SS was low. Third, adherence to dual antiplatelet therapy was high in the present cohort and may have further obliterated potential differences across groups.

Increasing lesion complexity as assessed by SS was associated with higher rates of TLF and POCE in a contemporary PCI population. BP-SES and DP-EES performed similarly across the entire spectrum of CAD severity in terms of composite endpoints up to two years of follow-up. The observed differences in the occurrence of individual outcomes and the potential of the SS to discriminate stent performance are only hypothesis-generating and deserve further evaluation. The external validation of the logistic clinical SS confirmed the utility of combining clinical and anatomic variables for predicting long-term mortality after PCI.

The operators were trained for score calculation and blinded to randomisation and clinical data. They scored each coronary lesion with a diameter stenosis ≥50% from the baseline angiogram according to the instructions available at the SS algorithm website (www.syntaxscore.com). The SS of 30 randomly selected cases were reassessed by the same readers four weeks later, with evidence of high similarity between score ratings within a patient, and high reliability of individual patient ratings of the SS: intraclass correlation coefficients (ICC)=0.90 (95% CI: 0.80-0.95). Cases of disagreement were referred to the judgement of a third analyst and the final decision was reached by consensus. For patients with prior coronary artery bypass surgery (CABG), the CABG SS was applied. In-stent restenosis lesions were scored as de novo lesions.

All patients with available SS were included in the analyses. Baseline characteristics and clinical outcomes were stratified according to SS tertile (low <8, medium 8-15, high >15) and study arm (BP-SES or DP-EES). Continuous variables were expressed as mean±standard deviation (SD); categorical variables were summarised as frequencies (%). Cox regressions were used to compare the outcomes between stent types across SS tertiles. In case of zero events in one comparator group, we reported continuity-corrected risk ratios with p-values from Fisher’s exact tests. Survival curves up to two-year follow-up were constructed for time-to-event variables with Kaplan-Meier estimates and compared by the log-rank test. We assessed performance of the logistic clinical SS using measures of calibration and discrimination. The calibration (how well the predicted event rate agrees with the observed event rate over a range of scores) was graphically assessed with plots of predicted vs. observed mortality rates by quintiles of logistic clinical SS. The discrimination of the logistic clinical SS was assessed with the Harrell’s C-index for survival data, which measures the ability to distinguish patients who experience an adverse event from those who do not. Larger values indicate better discrimination. A p-value of <0.05 was considered significant, and all tests were two-tailed. All analyses were carried out with Stata Statistical Software: Release 13 (StataCorp LP., College Station, TX, USA).

Early coverage of drug-eluting stents analysed by optical coherence tomography: evidence of the impact of stent apposition and strut characteristics on the neointimal healing process