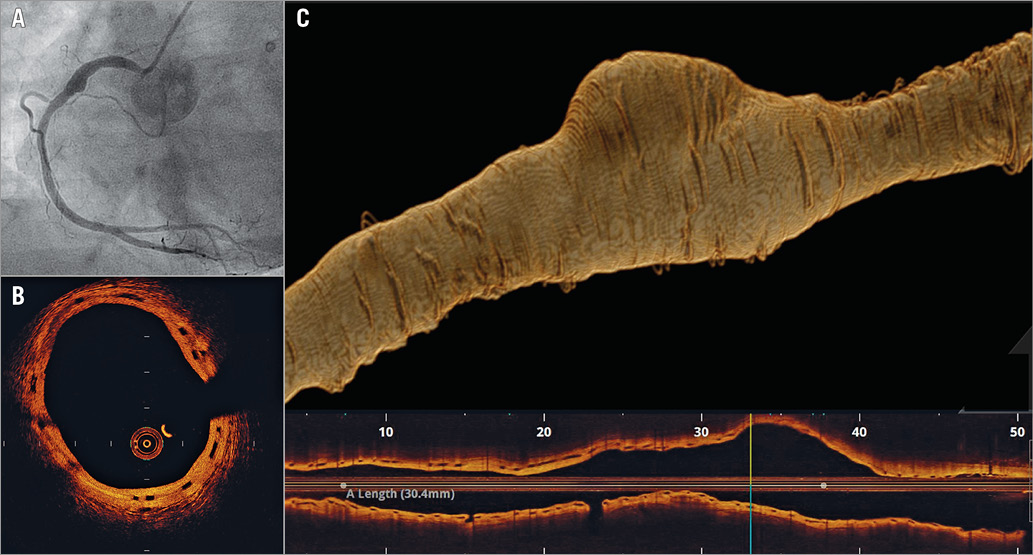 She re-presented with angina 21 months later. Angiography revealed a significant ostial RCA stenosis, with a localised coronary artery aneurysm within the scaffolded segment (Panel A). Pressure wire assessment yielded an FFR of 0.76 with a step at the ostium. Optical coherence tomography confirmed a large, acquired aneurysm at the point of minimal scaffold overlap (Panel B, Panel C). No malapposition was observed, and the scaffold appeared to have expanded with the vessel far beyond normal scaffold dimensions. A short drug-eluting stent (DES) was deployed to the ostium. The aneurysmal segment was managed conservatively with dual antiplatelet therapy (aspirin and clopidogrel).

This extreme form of positive remodelling in a BVS has not, to our knowledge, been described previously. The mechanism of acquired aneurysm following DES/BVS deployment remains unclear; however, hypersensitivity to the drug and/or polymer is possible. In this case, it is possible that “double-dose” everolimus at the point of BVS overlap may have been a factor in aneurysm formation.

J. Hill has received consulting fees from Abbott and St. Jude Medical. The other authors have no conflicts of interest to declare.