Methods and results: BIOSTEMI (NCT02579031) is a prospective, multicentre, randomised, controlled, superiority trial that will randomly assign 1,250 patients with STEMI undergoing PPCI to treatment with BP-SES or DP-EES. The primary endpoint of TLF, a composite of cardiac death, target vessel reinfarction, and clinically indicated target lesion revascularisation within 12 months, will be analysed with Bayesian models applied to the BIOSTEMI data set (n=1,250) using robust historical priors to incorporate historical information from the BIOSCIENCE STEMI subgroup (n=407).

Primary percutaneous coronary intervention (PPCI) is the reperfusion strategy of choice for patients with acute ST-segment elevation myocardial infarction (STEMI)1. However, PPCI during STEMI may predispose to stent malapposition due to stent undersizing and later thrombus resolution, thereby increasing the risk of stent thrombosis (ST) and in-stent restenosis2. In addition, vessel healing at the culprit site of STEMI is substantially delayed and may result in increased rates of late ST3. In this setting, early-generation durable polymer drug-eluting stents (DP-DES) were associated with substantial reductions in target vessel revascularisation (TVR) rates compared with bare metal stents (BMS)4,5, but this early benefit was offset by an increased risk of very late ST during subsequent years4,5, related to the persistence of durable polymers that results in chronic local inflammation, impaired endothelialisation and delayed arterial healing3.

The Orsiro DES (Biotronik, Bülach, Switzerland) is a novel biodegradable polymer sirolimus-eluting stent (BP-SES) consisting of an ultrathin-strut cobalt-chromium metallic stent platform and a unique hybrid combination of passive and active coatings32. The thin-layer, amorphous, silicon-carbide passive coating encapsulates the stent surface to reduce ion release from the metal stent platform and therefore minimises interaction with the surrounding tissue. The active coating contains a biodegradable poly-L-lactic acid (PLLA) polymer matrix that degrades completely within approximately 12-15 months and delivers sirolimus at a dose of 1.4 μg/mm2 with elution kinetics optimised to release in vivo over approximately 100 days32. In the Ultrathin-strut Biodegradable Polymer Sirolimus-Eluting Stent Versus Durable Polymer Everolimus Eluting Stent for Percutaneous Coronary Revascularisation (BIOSCIENCE) randomised trial, ultrathin-strut BP-SES were shown to be non-inferior to current best-in-class thin-strut biocompatible DP-EES with respect to the primary composite endpoint of target lesion failure (TLF) at one- and two-year follow-up22,33 in all-comers patients undergoing PCI. In the pre-specified subgroup of patients with STEMI, ultrathin-strut BP-SES were associated with significantly reduced rates of TLF during short- and long-term follow-up34,35 compared with thin-strut DP-EES. Based on these hypothesis-generating findings, we designed a large-scale, randomised trial to assess the clinical superiority of ultrathin-strut BP-SES over thin-strut DP-EES in patients with STEMI undergoing PPCI. 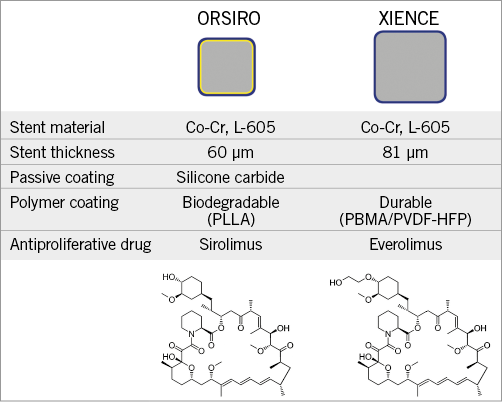 The primary objective of the BIOSTEMI trial is to investigate the study hypothesis that ultrathin-strut BP-SES are superior to thin-strut DP-EES in STEMI patients undergoing PPCI. The study will combine data from the previously initiated BIOSCIENCE study22 with prospective evidence from the BIOSTEMI trial using a robust Bayesian approach (Figure 2). The main features of the BIOSCIENCE and BIOSTEMI study designs and inclusion criteria are summarised in Supplementary Table 2. The Bayesian approach quantitatively combines data from the similarly designed BIOSCIENCE and BIOSTEMI studies, which allows a more precise estimation of the clinical performance of the two study stents for the treatment of patients with STEMI. The U.S. Food and Drug Administration (FDA) has recently recognised that Bayesian analyses may lead to smaller trials while still retaining full validity of the results, by making better usage of pre-existing high-quality evidence (Guidance for the Use of Bayesian Statistics in Medical Device Clinical Trials; issued on 5 February 2010 by the FDA). 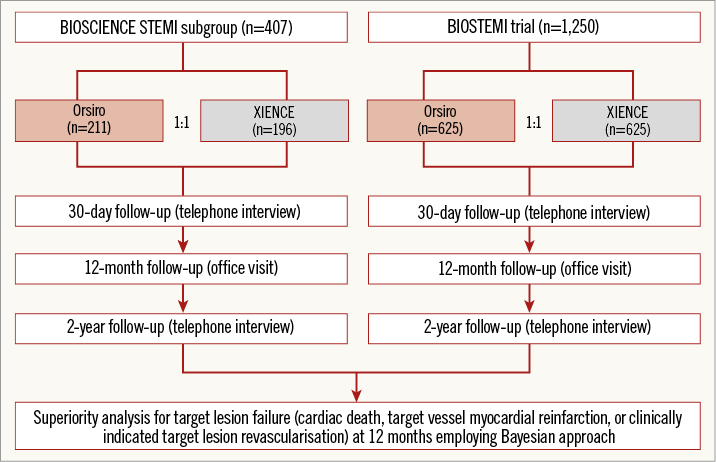 All subjects with STEMI within 24 hours of symptom onset and who qualify for PPCI according to current guidelines1 are eligible. Subjects with coronary artery lesions suitable for DES implantation will be enrolled according to the inclusion and exclusion criteria detailed in Supplementary Table 3.

After successful crossing of the acute infarct artery target lesion, patients will be randomised in a 1:1 ratio to treatment with either BP-SES or DP-EES. Random stent allocation will be performed using an electronic web database (Cardiobase, copyright by Department of Cardiology, CTU Bern, Switzerland, and 2mt Software GmbH, Ulm, Germany) and will be stratified according to study centre, diabetes status, and presence or absence of multivessel coronary artery disease.

PPCI will be performed according to current guidelines1. In patients with multivessel disease, revascularisation of all lesions in non-culprit vessels will be performed with the uniform use of the randomly allocated study stent within the same procedure or during subsequent staged procedures at the investigator’s discretion. Staged procedures for the treatment of non-culprit vessels are permitted within three months of the index procedure. There is no restriction with respect to type or number of lesions that are treated.

The schedule of measurements and follow-up plan are detailed in Supplementary Table 4. Patient data are collected in a web-based data entry system hosted at the CTU Bern. Data entry will be performed by the on-site study personnel. Central and on-site data monitoring will be organised by the CTU Bern according to a pre-specified monitoring plan. All electronic case report forms will undergo central data monitoring. On-site monitoring will be performed on the complete case report forms of the first 10 patients included at each participating site, followed by a random sample of 20% at each site. All serious adverse events will be submitted to the CTU Bern in a blinded fashion. Any death, myocardial reinfarction, revascularisation procedure, ST, cerebrovascular event, or bleeding complication will be independently adjudicated by a blinded CEC.

BIOSTEMI is a superiority trial powered for the primary composite endpoint of TLF within 12 months after the index procedure. New data from patients prospectively enrolled in the BIOSTEMI trial will be combined with historical data from the subgroup of patients with STEMI included in the BIOSCIENCE trial (BIOSCIENCE STEMI) that contributed to the primary clinical endpoint analysis22,34, employing a Bayesian approach based on robust historical priors (RHP). Compared to conventional meta-analytic approaches, RHP will down-weight historical information on the primary endpoint rates, if this information turns out to be inconsistent with the new data acquired on the primary endpoint rates, for each arm separately. The analysis method is based on Schmidli et al36 and adapted to the case of a single historical trial and estimation of rates and rate ratios (RR). A detailed description of the statistical analysis is provided in the Supplementary Appendix, Supplementary Table 5-Supplementary Table 7, Supplementary Figure 1, and Supplementary Figure 2.

All patients undergoing randomisation will be included in the analysis of primary and secondary clinical outcomes in the study arm to which they were originally allocated according to the intention-to-treat principle. The primary and secondary endpoints will be analysed with Bayesian log-Poisson models applied to new data from the BIOSTEMI patients with RHP that incorporate historical information from BIOSCIENCE STEMI patients. The individual observation time of each patient will be included in these models, and incidence rates and incidence RR will be provided. The RR will be reported as the median of the posterior distribution with two-sided 95% credibility interval (CrI). Superiority of BP-SES over DP-EES will be declared if the upper limit of the CrI is ≤1.

The BIOSTEMI trial is powered for superiority on the primary endpoint at 12 months using a robust Bayesian approach that incorporates historical information adopted by Schmidli et al36 and modified as detailed in the Supplementary Appendix. Power calculation was based on a Monte Carlo simulation, where information from the 407 BIOSCIENCE STEMI patients was included via RHP. Power was estimated as the number of simulated trials where superiority is declared divided by the total number of simulated trials. In BIOSCIENCE STEMI, an RR of 0.38 for BP-SES/DP-EES with respect to the primary endpoint TLF was observed at 12 months24,36. To be conservative, a less pronounced RR of 0.60, with an incidence rate for the primary endpoint of 4.2% in the BP-SES and 7.0% in the DP-EES arm, respectively, will be used for sample size calculation in the BIOSTEMI trial. We assumed a dropout rate of 5% at 12 months. With a 1:1 allocation ratio and a two-sided α=0.05, we found that enrolment of a total of 1,250 patients (625 per treatment arm) in the BIOSTEMI trial would provide more than 80% power to detect superiority of BP-SES over DP-EES.

Stratified analyses of the primary endpoint across major subgroups based on the BIOSTEMI subjects will be performed. Subgroup analyses of the primary endpoint will be performed with respect to diabetes, gender, age ≥65 years, BMI ≥30 kg/m2, multivessel disease, and chronic renal failure. Rates of cerebrovascular events and bleeding complications will be analysed according to the type and duration of the anticoagulant and antiplatelet strategies, as detailed in the Supplementary Appendix.

BIOSTEMI is an investigator-initiated trial supported by a dedicated research grant from Biotronik, Bülach, Switzerland. The authors are solely responsible for the design and conduct of this study and all study analyses. The funding source was not involved in the design of the study, is not involved in data collection and management, and has and will have no role in the analysis or interpretation of the study data.

Supplementary Table 5. Comparison of rate ratios and CIs obtained by frequentist and Bayesian methods with the vague prior given in eq.3.

Supplementary Table 6. Gaussian summary of the posterior log-rate (β) of TLF obtained from the historical data.

Supplementary Table 7. Type I error and power obtained by Monte Carlo simulation under several scenarios for the event rate expected in the new BIOSTEMI trial and for values of the weighting parameter.

Supplementary Figure 1. Graphical description of how the robust historical priors are constructed.

Supplementary Figure 2. Graphical description of how the primary endpoint and secondary endpoints will be analysed.