Chronic total occlusions (CTOs) represent the hardest anatomical challenge in modern day interventional cardiology with success rates inferior to the non-occlusive coronary artery disease (CAD). For over 20 years CTOs remained a field with very low attention despite the very high prevalence (30-40%) among patients with CAD with the majority of them referred for surgery or treated with medical therapy.

Over the last decade there were major advancements in antegrade techniques with the introduction of the parallel wire technique by Katoh and Reifart, the IVUS guidance pioneered by Suzuki, the STAR technique introduced by Colombo and, its recent refinements, the mini STAR by Galassi, the hydrodynamic recanalisation by Carlino and the limited antegrade subimal tracking (LAST) technique by Thompson.

The retrograde techniques have a long standing history. In the late 80s Hartzler introduced the retrograde dilatation of native artery stenosis proximal to the distal SVG anastomosis. In the early 90s, retrograde wire crossing of CTOs via SVG grafts were attempted. In the late 90s, the invention of bilateral approach led to the marker wire technique where the retrograde wire was used as a roadmap for the antegrade wire. In the early 00s, initial attempts to break the distal cap with balloons were attempted, and in 2005 Katoh pioneered in the field introducing the Controlled Antegrade and Retrograde subintimal Tracking (CART)1 technique establishing the modern era of the retrograde CTO recanalisation. Beyond the concept of retrograde dilatation within the occlusion to facilitate antegrade wire crossing the novelties introduced in this procedure were the targeted septal collateral crossing and balloon dilatation. A lot of tribute for these developments goes to Werner for his pioneering work on the classification and function of the collateral circulation2.

There are certain steps in the retrograde approach for CTO recanalisation:

Bilateral femoral puncture and bilateral contrast injection is a cornerstone step. The only exception applies to cases where the collaterals are ipsilateral (from the proximal part of the occluded artery to the distal) or epicardial collaterals connecting the LAD-LCX or in cases of left dominance where the septal collateral circulation is again connect the LAD and LCx both coming from the left main stem.

Guiding catheter (GC) selection is of paramount importance. Usually pre-shaped GCs, which provide good back-up support, are selected (EBU, CLS for the left system and AL2 and IMA for the right coronary artery). The traditional recommendation is 7-8Fr (which allows all possible techniques to be applied) mainly used in Japan and the USA but the use of 6Fr GC (better active support, safer puncture site) is very popular in Europe and in Canada especially in combination with the radial approach3. Certainly there is no consensus regarding the size of GC among the experts. Short (90-95 cm) or shortened GCs are sometimes necessary especially in long epicardial connections. The monitoring of the anticoagulation during the procedure is very important. An ACT should be measured every 30 min and should be maintained over the 300 sec to avoid any thrombotic complications in the donor artery which are potentially catastrophic.

Septal collaterals are the ones most often used (75 % of the cases). There are two techniques for crossing. The first is the collateral continuity establishment with tip contrast injection via a microcatheter and the second is the “trial and error” or “septal surfing” technique where septals are crossed in a blind fashion without contrast guidance. The use of epicardial collaterals has recently increased (up to 25%) due to the development of microcatheters dedicated for collateral crossing (Corsair; ASAHI Intecc., Aichi, Japan and FineCross™; Terumo Corp., Tokyo, Japan). Epicardial collaterals tend to be tortuous, but the key morphology for successful crossing is the vessel size and not the tortuosity. Dedicated hydrophilic coated/polymer jacket soft wires (Filder FC/XT; ASAHI Intecc., Aichi, Japan and Whisper; Abbott Vascular, Redwood City, CA, USA) supported by microcatheters are the most suitable for collateral crossing. Septal collaterals are safer to use compared to the epicardial ones as any complications related with their crossing are not usually related to serious adverse clinical outcomes.

In 2005 the CART technique was the breakthrough1. The principle of this technique was the retrograde dilatation of the occlusion, most often close to the distal cap, thus creating a large target (subintimal space) facilitating antegrade wire crossing. The main disadvantage of this technique was related to the need for septal dilatation with short balloons to enable material advancement, a procedure related to the majority of the complications. The development of dedicated microcatheters for collateral crossing such as the Corsair from Asahi and the Finecross from Terumo abolished the necessity for septal dilatation but also the capacity for retrograde dilatation of the occlusion shifting the field to the reverse-CART technique. The principle is the same as the CART technique with the difference that the subintimal space creation is done with antegrade balloon dilatations facilitating the crossing of the occlusion with the retrograde wire. Currently this is the dominant technique in retrograde CTO approach4. IVUS guidance for the connection of the antegrade and retrograde subintimal spaces5 significantly contributed to our understanding of these techniques, but didn’t get widespread adoption due to its inherent complexity and cost related issues. More recently, a variety of modifications of these basic techniques have been introduced such as the facilitation of subintimal space creation with stents (stent CART technique after septal over dilatation and the stent reverse-CART technique) introduced by Sianos (Figure 1) as well as the so-called “tip in methods” where the crossing wires (antegrade or retrograde) are targeting the inner lumen of microcatheters6 mainly aimed at the simplification of the retrograde approach. 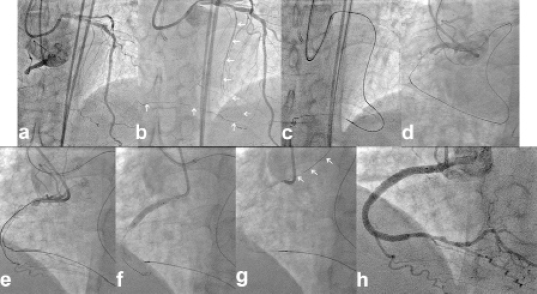 Figure 1. An example of a stent reverse-CART technique. a) An occluded RCA collateralised via septal collaterals from the LAD. b) The septal collaterals were crossed with a Filder FC wire (arrows) that reached the distal cup. c) A Corsair microcatheter easily crossed the septal channels. d) The retrograde wire followed a subintimal course and failed to reach the proximal true lumen. e) A Miracle3 wire from the antegrade route reached a right ventricular branch. f) After lesion predilatation with a TREK 2.5 x 20 mm balloon, two XIENCE Prime stents were implanted creating a stable lumen in proximal RCA. g) The retrograde wire easily crossed the stented proximal RCA reaching the accenting aorta (arrows). h) Final result after wire externalisation and additional stent implantation in the mid RCA.

Certainly retrograde techniques revolutionised the field of CTO recanalisation with reported success rates for the first time exceeding 90% and the predictive factors of success of failure, for the first time, were not related to the CTO itself, but only to the characteristics of the collateral circulation7. There are certain complications related to the retrograde approach concerning the occluded artery (dissection, perforation antegrade or retrograde) or the donor artery (spasm, dissection, thrombosis). Despite being very serious they are very rare. The most common complications unique to retrograde techniques are related to the collateral vessels (rupture leading to septal haematoma or communication with a cavity, tamponade or flow disruption leading to ischaemia, especially for epicardial collaterals), but they tend to be minor and easily treatable in the majority of the cases. With the development of dedicated materials for collateral crossing the incidence of these techniques has been drastically decreased.

Initially the retrograde approach was reserved for patient after antegrade failure on separate procedures. With our current level of experience the trend is to combine both approaches in the same procedure, shifting from one to the other as necessary, in order to have a successful CTO recanalisation, while keeping radiation, contrast and material consumption at logical levels. However, there is always an antegrade part, even in the most complex retrograde procedure.

Physician training and centre organisation are very important and currently there are not clear guidelines. The EuroCTO club is preparing the revised consensus paper establishing recommendations regarding these issues.

The retrograde approach represents a breakthrough in CTO recanalisation and should be regarded as a valid contributor to the armamentarium of the modern day interventional cardiologist. We should keep in mind that it has also has its limitations and complications. It requires adequate proctorship and training and is not a technique to be tried without an already good foundation in CTO PCI via the customary antegrade approach.