Aims: The aim of this study was to assess the safety and feasibility of manual removal of a non-occlusive coronary thrombus using an open filter device.

Methods and results: Between April 2006 and December 2011, 1,102 patients were treated percutaneously for acute coronary syndrome at our institution. Of these, nine (1%) had a large “cannon-ball” non-occlusive intracoronary thrombus, which did not improve with standard thrombectomy aspiration catheters. In these patients, we describe a novel technique of thrombus removal using the ev3 Spider™ filter device. Four patients had LAD thrombus, three had RCA thrombus, one LCX thrombus and one SVG thrombus. The primary endpoint of substantial or complete thrombus removal, prevention of no-reflow/slow flow phenomenon and achievement of TIMI 3 flow post stenting was achieved in all cases. Coronary dissection occurred in one case where the lesion was heavily calcified. There were no other complications related to the device.

Conclusions: This is the first case series describing the use of the ev3 Spider™ filter device for the removal of a large intracoronary thrombus refractory to conventional treatment. This was associated with a high procedural success rate and may reduce the risk of no-reflow in these cases.

Thrombosis plays a pivotal role in the pathophysiology of acute coronary syndrome (ACS). The presence of thrombus, detected with angiographic criteria, has been associated with suboptimal results in up to 15% of patients undergoing percutaneous coronary intervention (PCI) for ST-elevation myocardial infarction (STEMI) due to microembolisation and macroembolisation. Thrombus-containing lesions are associated with an up to sevenfold increase in periprocedural myocardial infarction and mortality compared to lesions without thrombus1. Large thrombus, defined as greatest linear dimension more than twice the vessel diameter not causing total occlusion, is a significant independent predictor for two-year mortality and in-hospital major adverse cardiac events2. When the thrombus is subacute and non-occlusive, it may be visualised as a defined filling defect and may be especially difficult to remove using thrombectomy devices. We have named such large, non-occlusive, well-circumscribed thrombi as “cannon-ball” thrombus (CB-T). In this study, we describe the technique and examine the effectiveness of an open filter device withdrawn across the thrombus to capture and remove such thrombi.

In this retrospective study performed between April 2006 and December 2011, of 1,102 ACS cases undergoing PCI, we identified nine patients (1%) with angiographic features of CB-T. We examined the success of thrombus removal by withdrawing an open filter device across the thrombus. The device used in all cases was the ev3 Spider™ filter device (ev3, Inc., Plymouth, MN, USA). This device consists of a filter wire and a delivery/recovery catheter. One of the advantages of this device compared to other distal protection systems is that lesion crossing is with a standard coronary wire which is exchanged for the filter wire. In this case series we describe an open filter “catch and grab” withdrawal technique to remove thrombus prior to balloon or stent deployment.

The following protocol was applied in all cases. All procedures were performed transradially using 6 Fr and 7 Fr guiding catheters. Cases of CB-T in which the target vessel was ≥3 mm (large enough to accommodate a Spider catheter) were selected. The presence of angiographic stenosis of ≥70% in the same target vessel segment but separate from the CB-T could have prevented the delivery of the device, and therefore these cases were excluded. Following the passage of one coronary wire to the distal vessel, aspiration using a simple aspiration device (Export® XT aspiration catheter; Medtronic, Minneapolis, MN, USA) was attempted in all cases. If this was unsuccessful, a second coronary wire was advanced across the lesion. An ev3 Spider™ filter device was then advanced over one of the wires into the distal vessel and its basket opened. The size of device was chosen to be one size larger than the distal reference vessel diameter (e.g., a 4 mm device for a 3.0 to 3.9 mm reference diameter). Following successful capture of the thrombus, the retrieval catheter was used to close the neck of the basket and the device was removed. If residual thrombus was present, the Spider device was reintroduced and the withdrawal procedure repeated. At all times the second wire remained in the distal vessel to ensure continuous access to the vessel. Following thrombus removal, PCI of the target lesion was performed in the usual way.

Recorded outcomes included angiographic assessment of thrombus removal, inspection of the contents of the basket following retrieval for thrombotic material, angiographic success at the target lesion site, final TIMI flow and angiographic evidence of embolisation, both immediately following thrombectomy and at the end of the procedure. The proportion of thrombus removed with the device was angiographically defined as nil, minimal (<30%), significant (30-70%), substantial (70%-90%), or complete in terms of thrombus volume, comparing the size of the filling defect angiographically before and after basket thrombectomy. The procedure was considered successful if TIMI 3 flow across the vessel was obtained and the patient’s recovery was good with no major cardiovascular adverse events, such as death or recurrent myocardial infarction. The procedural outcomes are presented in detail in Table 1. 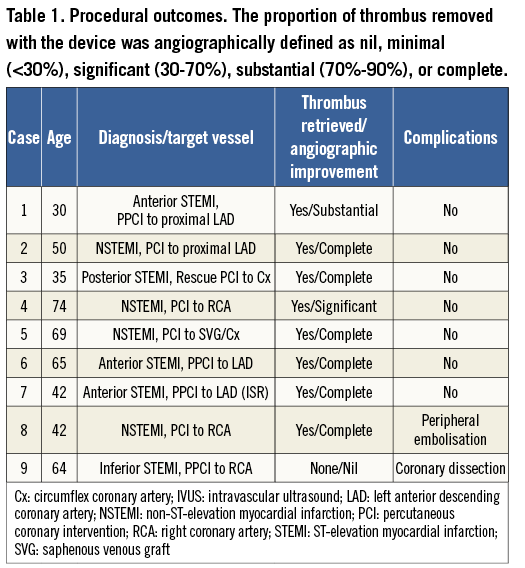 Three procedures were performed in patients presenting with STEMI undergoing primary PCI, one patient underwent rescue PCI (Figure 1), and five patients presented with non-ST-elevation myocardial infarction (NSTEMI) (Figure 2, Figure 3). Patients who presented with NSTEMI had TIMI 3 flow, while the remaining patients had TIMI 2 flow prior to intervention. All patients were male. The mean age was 53 years (range 30-69). Eight out of the nine patients were correctly diagnosed with CB-T during initial angiography. 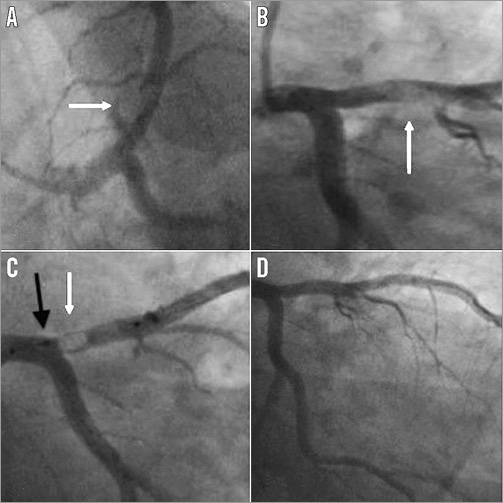 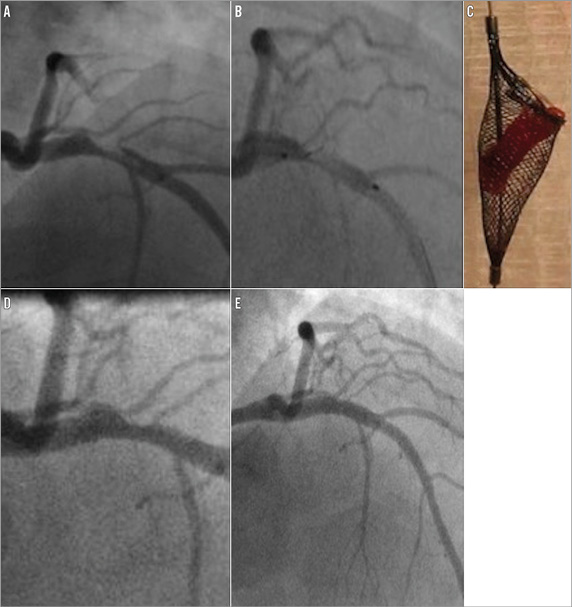 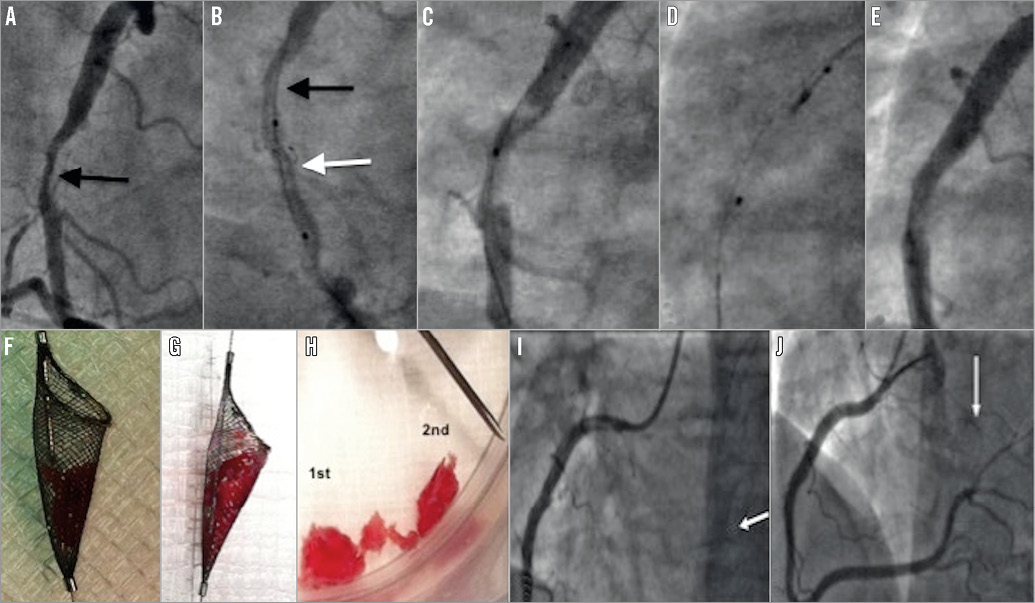 On angiographic assessment, complete thrombus aspiration using this technique was achieved in six cases (67%), and significant (>30%) or substantial (>70%) thrombus aspiration was achieved in one case each, respectively. In case 8 (Figure 3) the thrombus burden was substantial and required the passage of the filter device three times for complete removal of the thrombus. Following the final passage of the Spider device, a small thrombus embolised to a sub-branch of the posterior left ventricular branch. This small occlusive embolic thrombus was completely removed using an Export aspiration device (Medtronic).

Following removal of the Spider device and successful thrombus extraction, the culprit lesion was stented over the remaining second wire in all of these cases. Following stenting, there was TIMI 3 flow, a good angiographic result and no evidence of further embolisation in all cases. In case 9 (Figure 4), calcified atheroma was misdiagnosed as thrombus. The open basket got stuck as it contacted this lesion, pulling in the guide catheter. This caused a proximal vessel dissection which required a longer length of stenting than anticipated but with a good final angiographic result and TIMI 3 flow post stent deployment. The presence of the second wire in the distal vessel which maintained access across the stented segment was especially useful in this case.

This study examined the efficacy and safety of an open Spider device to remove well-circumscribed, non-occlusive coronary thrombus which we have described as “cannon-ball thrombus”, which is not amenable to removal using conventional simple aspiration devices. In all eight patients in whom CB-T was correctly identified, large volumes of thrombus were successfully removed. This allowed successful stenting in all cases with a good angiographic result and no subsequent in-hospital complications. Withdrawal of the open device itself was not associated with significant vessel trauma resulting in vessel occlusion or dissection, despite choosing a diameter larger than the lumen to ensure apposition. However, it should be noted that the vessel either side of the thrombus had, at most, mild disease. We therefore propose this as a safe and highly effective technique to remove this type of coronary thrombus which is both resistant to removal using other techniques and likely to cause major complications if directly stented or dilated with a balloon. Case 9 shows that it is also very important to differentiate calcified atheroma from CB-T and, if this is not possible angiographically, IVUS or OCT should be performed (Figure 4).

This was a small series, and alternative options such as conservative treatment, thrombolytic therapy, mechanical thrombectomy or covered stenting were not compared.

CB-T is an uncommon finding accounting for 1% of PCI procedures in patients with ACS. However, when encountered, conventional treatments are frequently ineffective and may lead to catastrophic distal embolisation. Withdrawal of an open filter device (Spider™; ev3 Inc.) is a simple and effective means to remove such thrombi, and was both safe and highly effective. We have described important procedural steps to optimise case selection and avoid complications.

High-speed rotational atherectomy using the radial artery approach and a sheathless guide: a single-centre comparison with the “conventional” femoral approach