Risk of stroke, atrial fibrillation, and major bleeding after mitral valve repair: the jury is still out

In large registries, the incidence of clinically overt stroke after TMVR is reported to be very low, ranging from 0.2% to 0.4% at discharge and from 0.7% to 0.8% at 30 days4,5,6,7. However, recent studies have revealed that cerebrovascular injury after TMVR as detected by neuroimaging is more frequent than expected and heterogeneous debris is invariably found in embolic protection devices when used during interventions8,9. Although still not well defined, the main mechanism of cerebrovascular injury during TMVR seems to be based on periprocedural embolism of acute thrombus, fragments of the hydrophilic coating of the device, air, and valve or atrial tissue9,10.

In this issue of EuroIntervention, Barros da Silva and colleagues pooled aggregate data from available observational studies and randomised clinical trials in a pairwise meta-analysis with the primary aim of defining the risk of short-term stroke between TMVR and SMVR and long-term stroke between TMVR and optimal medical therapy (OMT)11. Secondary objectives were the assessment of the risk of post-procedure atrial fibrillation and major bleeding between interventional strategies11.

The most important finding of this meta-analysis is that the risk of stroke in patients who underwent TMVR does not differ significantly from that of those who underwent SMVR and OMT11. Transseptal puncture and crossing to the left heart chambers with a large bore delivery system can entail a serious risk of periprocedural cerebral and systemic embolisation, and long-term consequences of paradoxical embolism through an interatrial septum defect – that remains unclosed in many patients several months after procedure – have been described elsewhere12,13. By showing no significant risk difference between treatments, current data do not suggest prioritising the individual risk of stroke among factors considered when deciding between TMVR and SMVR. By reviewing the available data from randomised clinical trials comparing TMVR with OMT, the limited number of early intervention-related events did not translate into an increased risk of stroke at 24 months3,14.

Overall, these results highlight the low incidence of stroke after TMVR but at the same time reveal that the available evidence on the topic is fragmentary and limited, as acknowledged by the authors. We combined the available data in a thought-provoking frequentist random-effects network meta-analysis to illustrate the challenge of drawing strong conclusions on the topic (Figure 1). 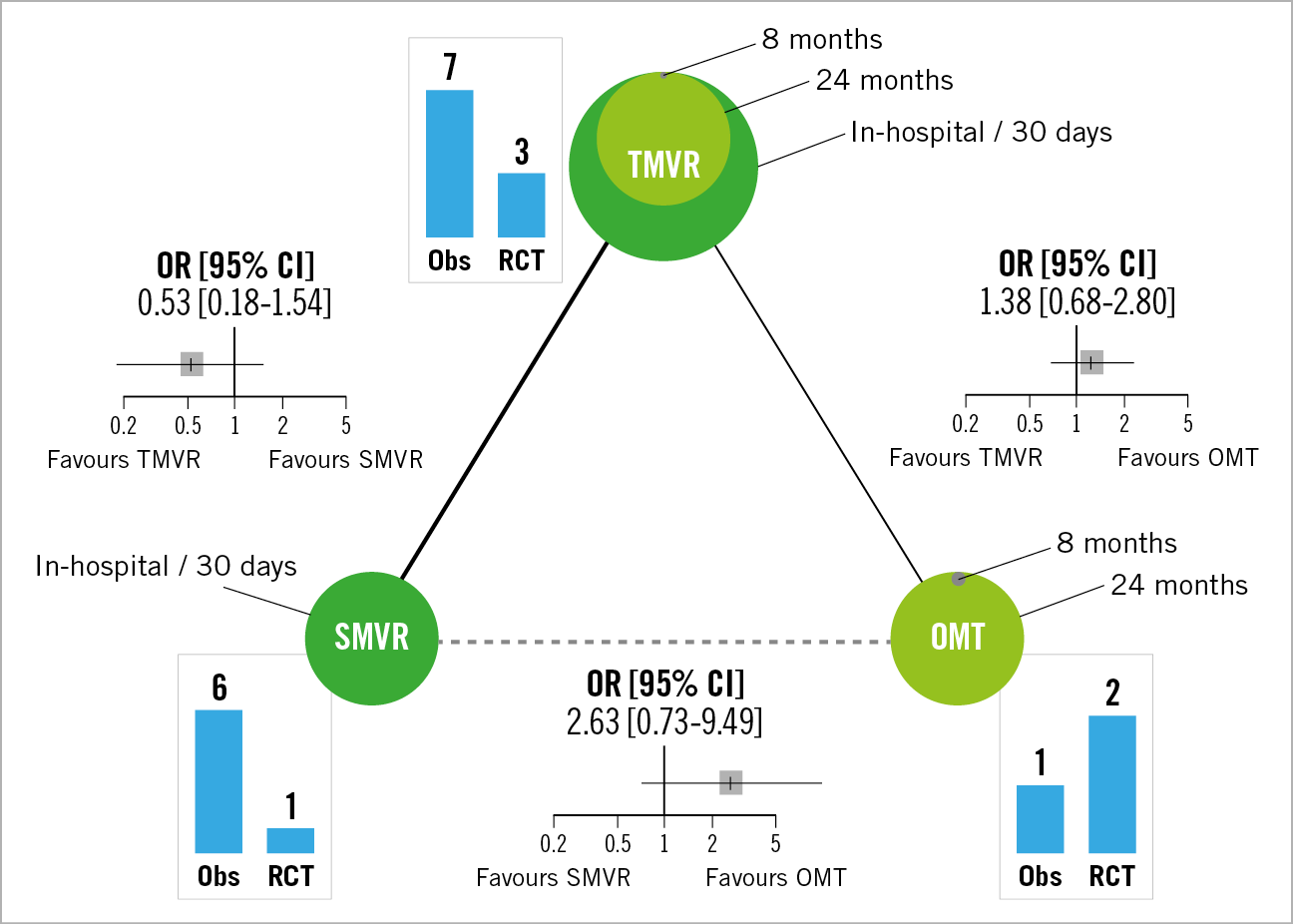 Figure 1. Risk of stroke after TMVR, SMVR, and OMT as illustrated by running a frequentist random-effects network meta-analysis. The available evidence is fragmentary and affected by significant limitations in terms of study design, sample size, follow-up length, and sources of bias. This thought-provoking analysis sought to highlight the limited value of meta-analyses compared with narrative reviews when information on the topic is scant and of low quality. Nodes are proportional to the number of patients. Within each node the surface is stratified proportionally to follow-up length. Histograms illustrate the number of arms from observational studies and randomised clinical trials contributing to each node. Solid lines describe direct connections between nodes and have thickness proportional to the number of contributing studies. The comparison between SMVR and OMT is only indirect (dashed line). CI: confidence interval; Obs: observational study; OMT: optimal medical therapy; OR: odds ratio; RCT: randomised clinical trial; SMVR: surgical mitral valve repair; TMVR: transcatheter mitral valve repair

The quantitative synthesis of data was biased due to the inclusion of observational studies – six out of seven for the direct comparison TMVR versus SMVR – and corresponding individual risk estimates had limited reliability since they do not take into account the imbalance in baseline characteristics between treatment groups (i.e., crude analyses). Moreover, the assignment of the treatment in these studies was dependent on several measured and unmeasured variables that probably subtend different individual risk profiles between and within groups. From a statistical point of view, even after pooling all the available data, the meta-analysis remains affected by limited power for the endpoint of stroke, and the use of hazard ratios to account for right censoring over follow-up would have been preferable for the analysis of long-term events. Importantly, any indirect assumption according to the results of TMVR versus SMVR and TMVR versus OMT is flawed because the first analysis refers to in-hospital or 30-day events, while the second analysis refers to approximately 8 to 24 months. The qualitative review of data revealed that in most studies the events captured were clinically overt and site self-reported. Independent adjudication of events and specialised neurological clinical and instrumental assessment were guaranteed only in randomised clinical trials3,14. In addition, the observational studies included in the meta-analysis showed generally limited quality and two reports might share the same data because they were derived from the same institute and group of authors11. Finally, considering that the absence of clinical signs of transient ischaemic attack or stroke after interventions does not exclude the presence of cerebral injury8, investigations employing the systematic use of neuroimaging in larger numbers of patients are still required to define the clinical and prognostic meaning of this phenomenon.

The secondary conclusions of the meta-analysis of Barros da Silva and colleagues are that post-procedure risk of atrial fibrillation and post-procedure risk of bleeding were lower after TMVR compared with SMVR11. Although these results are notable and a reasonable expression of the lower invasiveness of TMVR, their interpretation should take into account the following considerations. With respect to atrial fibrillation, the summary estimate is significantly influenced by two small retrospective studies showing striking risk reductions11. Overall, the retrospective design of the studies, the undefined duration of events, the unclear relationship between stroke history and development of atrial fibrillation after interventions – not possible to define without individual patient data – and the unknown consequences in terms of immediate and chronic therapeutic requirements enhance the need for higher quality data. With respect to bleeding, no uniform definition was used and, in some cases, the need for transfusions was considered an acceptable surrogate for a major event11. This methodological decision led to significant variations in the number of events across the included studies, although this limitation involved both treatment groups.

In aggregate, this updated meta-analysis shows higher or similar safety of TMVR compared with SMVR. In TMVR, the focus remains the selection of the proper cardiac and mitral valve anatomy and function to achieve a substantial reduction of mitral regurgitation and gain long-term benefits from the procedure3,14. Pending questions about the comparative efficacy and safety of TMVR versus SMVR will hopefully be addressed in the coming years by ongoing trials (e.g., REPAIR MR [NCT04198870] and MITRA-HR [NCT03271762]) and new devices (e.g., CLASP IID/IIF [NCT03706833]), while data about transcatheter mitral valve bioprosthesis implantation may expand current indications to the other subsets.

Myocardial fibrosis in severe aortic stenosis: how and when should we measure it?