Aims: To compare the feasibility, procedural and clinical outcomes after implantation of bioresorbable vascular scaffolds (BVS) in patients with calcified lesions.

The prevalence of coronary calcification (Agatston >0 on computed tomography) in the asymptomatic population is as high as 60% in males and 40% in females of different ethnicities6. Moderate/severe calcification was prevalent angiographically in 38% of lesions whereas intravascular ultrasound (IVUS) detected calcium in 73% of lesions7. Calcific lesions remain a challenge for the interventional cardiologist despite the advent of low-profile, non-compliant, high-pressure, bladed or scoring balloons. In tertiary centres, rotablation use is required in up to 5% of cases8. MACE rates after treatment of calcific lesions are higher compared to the general PCI population9, probably reflecting increased rates of incomplete revascularisation and more extensive coronary artery disease (CAD) in a population with a high comorbidity burden, particularly diabetes and chronic kidney disease (CKD). On some occasions, despite meticulous lesion preparation, optimal strut apposition is not possible10. The increased BVS strut thickness (leading to inferior deliverability) and reduced radial force (with time and expansion beyond nominal size) have raised concerns regarding the feasibility, performance and clinical outcomes of BVS in the treatment of calcific lesions. Use of BVS in patients with calcific lesions, however, would be of particular benefit as these patients tend to have more extensive disease requiring longer stents. Furthermore, even though restoration of vasomotion in a circumferentially calcified lesion is unlikely to occur unless an atherectomy strategy is employed, positive remodelling and partial vasomotion restoration would be expected in lesions with moderate non-circumferential calcification5.

Of all patients treated with BVS, those with at least one calcified lesion (defined as calcium arc >90° on IVUS or at least moderate lesion calcification on angiography in the absence of IVUS) were classified as the “calcific group”, whereas patients with no calcific lesions were classified as the “non-calcific group”. Angiographically moderate/severe calcification was defined as radiopacities noted with or without cardiac motion before contrast injection, generally compromising both sides of the arterial lumen7,13. In the study by Mintz et al7, moderate calcification angiographically exhibited a mean calcification arc of 165° on IVUS (in the current study the mean calcium arc was 183.5°). The cut-off of 90° was selected, as in previous studies it has been demonstrated that a calcium arc >90° is associated with reduced stent expansion and increasing use of rotablation14,15.

All patients were pretreated with aspirin and clopidogrel or ticagrelor or prasugrel and instructed to carry on with dual antiplatelet therapy for at least one year. Quantitative coronary angiographic (QCA) measurements were performed offline using a validated edge detection system (CMS, version 5.2; Medis Medical Imaging Systems BV, Leiden, The Netherlands) by an experienced interventional cardiologist (TN) not otherwise involved in the current trial and its outcomes; minimal lumen diameter (MLD), reference vessel diameter (RVD), and percentage of diameter stenosis were measured at baseline.

All continuous variables were tested for normality using the Kolmogorov-Smirnov test. Data are presented as percentages, mean±standard deviation (SD) or median (interquartile range). Differences in proportions were tested with the chi-square test or Fisher’s exact test, and differences in continuous variables were tested with the Student’s t-test or Wilcoxon rank-sum test for parametric and non-metric variables, respectively. Cumulative event curves were generated using the Kaplan-Meier method.

OUTCOMES IN PATIENTS WITH AND WITHOUT CALCIFIC LESIONS

The current study suggests that BVS implantation in calcified lesions is feasible, albeit at the cost of longer procedures and increased rates of periprocedural MI. Furthermore, it demonstrated acceptable short-term (one-year) MACE rates after BVS implantation in patients with calcific lesions. This comes at the expense of increased procedural and fluoroscopy times, increased use of IVUS, scoring balloons and rotablation, all of which facilitate meticulous lesion preparation and optimal stent apposition and expansion (Figure 2, Figure 3). 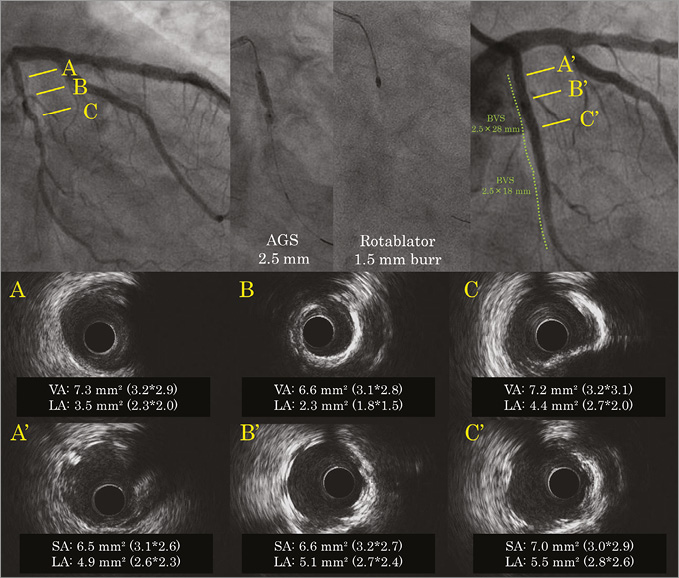 Figure 2. Angiographic and intravascular ultrasound (IVUS) images before (A, B, C) and after (A’, B’, C’) treatment of a left circumflex calcific lesion with bioresorbable vascular scaffolds. Baseline IVUS revealed a tight lesion with 180° of calcification and a minimum lumen area (MLA) of 2.3 mm2 (B) in the proximal left circumflex (LCx). The scoring balloon was unable to dilate the lesion, hence rotablation with a 1.5 mm burr was used. Final IVUS demonstrated a well-expanded scaffold with a lumen area of 5.1 mm2 and scaffold area of 6.6 mm2 at the MLA site (B’). AGS: AngioSculpt scoring balloon (AngioScore, Inc., Fremont, CA, USA); BVS: bioresorbable vascular scaffold; SA: scaffold area; VA: vessel area 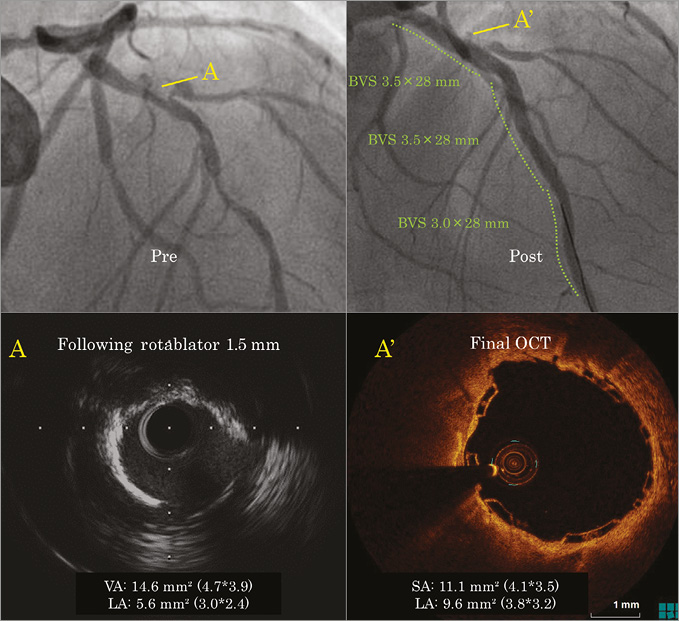 BVS are considered by many to be the fourth revolution in coronary intervention20. The temporary scaffold, which prevents acute recoil and neointimal hyperplasia in the initial phase after implantation, gradually disappears, liberating the vessel from the negative effects of a metallic cage3,21,22. This promising technology aims to eliminate the fear of late stent thrombosis and help in the restoration of physiological vasomotion, leading to late luminal gain and late expansive remodelling. The future absorption of BVS allows future grafting of stented segments, facilitates reopening of “jailed” side branches23 and disappearance of overhang at ostial lesions. These benefits are of particular importance in patients with calcific lesions, who often have extensive coronary artery disease requiring long segments of stents (full metal jackets). Future studies are needed to demonstrate whether there is partial restoration of physiological vessel motion and expansive remodelling in non-circumferential calcific lesions or in lesions with circumferential calcium treated with atherectomy, cutting or scoring balloons.

Despite the plethora of new-generation stents and adjunctive technologies, calcific lesions remain a challenge for the interventional cardiologist. In a subanalysis of the randomised controlled TAXUS IV trial24 (1,314 patients randomised to bare metal stent [BMS] vs. paclitaxel-eluting stent [PES]), Moussa et al demonstrated a significant reduction in late lumen loss in calcific lesions (n=247) treated with PES vs. BMS (0.26±0.56 vs. 0.51±0.48 mm, p=0.015). In a study from the SPIRIT II trial25, the efficacy of EES in patients with at least one moderate calcific lesion (68 patients), determined angiographically, was compared to those without any calcific lesion (144 patients). Late lumen loss was similar between the two groups at two years (0.40±0.47 mm in the calciﬁed group vs. 0.31±0.28 mm in the non-calcified group, p=0.54). No significant difference in two-year MACE rates was observed between the two groups (calcific vs. non-calcific: 10.9% vs. 4.4%, p=0.12). The numerically increased MACE rate was attributed to an increased ischaemia-driven TLR (7.8% vs. 1.5%, p=0.03). In a pooled analysis of seven first- and second-generation DES trials9, Bourantas et al revealed severe coronary calcification (assessed by angiography) to be an independent marker of three-year all-cause mortality (HR 1.33, 95% CI: 1.00 to 1.77, p=0.047) and the composite outcome of death, MI and any revascularisation (HR 1.18, 95% CI: 1.01 to 1.39, p=0.042). These worse outcomes in patients with calcific lesions may be partially attributed to suboptimal or incomplete revascularisation reflected in higher residual SYNTAX scores, a powerful determinant of prognosis26.

Treating lesions in non-compliant vessels increases the odds of stent underexpansion, and difficulties in device delivery may strip the polymeric material with ensuing compromise in local drug elution. Stent underexpansion may be subtle angiographically and overlooked in many cases. Hence, IVUS use and QCA are of utmost importance when treating calcific lesions. According to proposed strict criteria by de Jaegere et al27, excellent expansion is evident when the minimum lumen area in the stent is ≥90% of the average reference lumen area. In severely calcific long lesions, extensive decalcification using rotational or orbital28 atherectomy followed by extensive DES implantation appears less attractive due to increased rates of future TLR11. However, the advent of BVS may justify a decalcification strategy followed by bioresorbable vascular scaffold implantation for diffusely diseased, calcific arteries29. However, unlike the second- and third-generation DES, the delivery of first-generation BVS in calcified lesions can be more challenging due to their strut thickness (Absorb: 157×191/210 µm)30. Furthermore, when stretched beyond its designed limits and after partial bioabsorption as time goes by, a BVS may lose some of its radial strength and may be prone to acute or late recoil.

The findings of the current study alleviate some of these concerns, by demonstrating that BVS implantation is feasible in calcific lesions with acute gain similar to that of non-calcific lesions, albeit at the expense of increased procedural times, increased use of dedicated devices and increased rates of periprocedural MI. One-year MACE rates appear acceptable in patients with and without calcific lesions.

Limitations of the current study include the small sample size, the relatively short follow-up and the lack of routine angiographic and intracoronary imaging follow-up. Furthermore, operators used IVUS predominantly for complex lesions, hence this selection bias may have influenced procedural and intermediate-term outcomes.

In conclusion, this is the first study to demonstrate the feasibility of BVS implantation in calcific lesions with acceptable periprocedural and one-year outcomes. Meticulous lesion preparation and the use of dedicated devices, such as scoring balloons and rotablation, facilitate optimal stent expansion and apposition at the expense of increased procedural and fluoroscopy times and higher rates of periprocedural MI. Future large studies with long-term follow-up, including routine angiographic and intravascular imaging follow-up, are eagerly awaited to identify the role of BVS in the treatment of calcific lesions.