Macedonia: coronary and structural heart interventions from 2010 to 2015

The aim of this report is to describe invasive cardiology procedural practice in Macedonia during the period from 2010 to 2015. Details of all consecutive 39,899 patients who underwent cardiovascular, peripheral or structural heart procedures during the period from 2010 until 2015 were examined. Clinical and procedure characteristics, access site, procedural success and complications were analysed. The number of coronary angiographies increased from 5,540 in 2010 to 8,550 in 2015. Transfemoral access (TFA) was present in 4% of coronary angiographies in 2010 and had decreased to 1% in 2015. The number of primary percutaneous coronary interventions (PCI) for acute ST-segment elevation myocardial infarction increased from 763 to 1,175 and both chronic total occlusion and left main coronary artery interventions also increased over time. In 2015, the drug-eluting stent penetration rate was 65%. Structural heart interventions, including transcatheter aortic valve implantations (TAVI) were introduced in 2014 and 23 TAVI cases have since been performed. Transradial access was performed in 38,455 (96%) of all patients. Wrist access adoption in the majority of cardiovascular interventions is possible in all PCI centres in Europe if an appropriate national strategy is developed.

The Republic of Macedonia has a current population of close to 2.1 million inhabitants. Until 2014 there were only two percutaneous coronary intervention (PCI) centres in the country. Currently, there are seven additional (five public, two private), low-volume invasive cardiology centres. Two of these nine centres operate around the clock and three have on-site cardiac surgery. There are, altogether, 25 interventional cardiologists and 10 additional fellows in training.

Patients in Macedonia have unlimited access to treatment, and all procedures are covered by the national healthcare insurance. Basic information on all invasive cardiology and endovascular procedures performed within the country is tracked in a single, integrated nationwide electronic health record (EHR) system, and a detailed clinical interventional cardiology registry is currently under construction. Cardiac catheterisation laboratory directors were surveyed regarding their annual procedural volumes and case mix.

The University Clinic of Cardiology in Skopje is the largest volume interventional cardiology centre in Macedonia providing over 80% of all cardiovascular interventions. It is the only transcatheter aortic valve implantation (TAVI) centre. It serves as the main referral centre for primary percutaneous coronary intervention (PPCI) and complex procedures. It is a training centre with three catheterisation laboratories and 10 senior interventional cardiologists, performing approximately 6,000 catheterisations and 3,000 PCIs annually.

Using pre-specified definitions, clinical and procedural data are entered into a dedicated cardiac catheterisation laboratory database at the conclusion of each case by the University Cardiology Clinic operator and used to generate the official procedural report.

Internal audit of the data in the largest PCI centre in Macedonia is carried out on a monthly basis, but no external audit or quality control of entered data is available.

Nationwide, 39,899 patients underwent cardiovascular, peripheral or structural heart procedures during the period from 2010 to 2015. Overall procedures from the catheterisation laboratories in Macedonia are shown in the general table (Table 1). The vast majority of cardiovascular procedures were invasive coronary procedures, followed by endovascular peripheral interventions (1,183 or 2.9% of patients including carotid and subclavian artery stenting and interventions on the lower extremities). From 2010 to 2015, 96% of all procedures performed in cardiac catheterisation laboratories were via the transradial access (TRA). 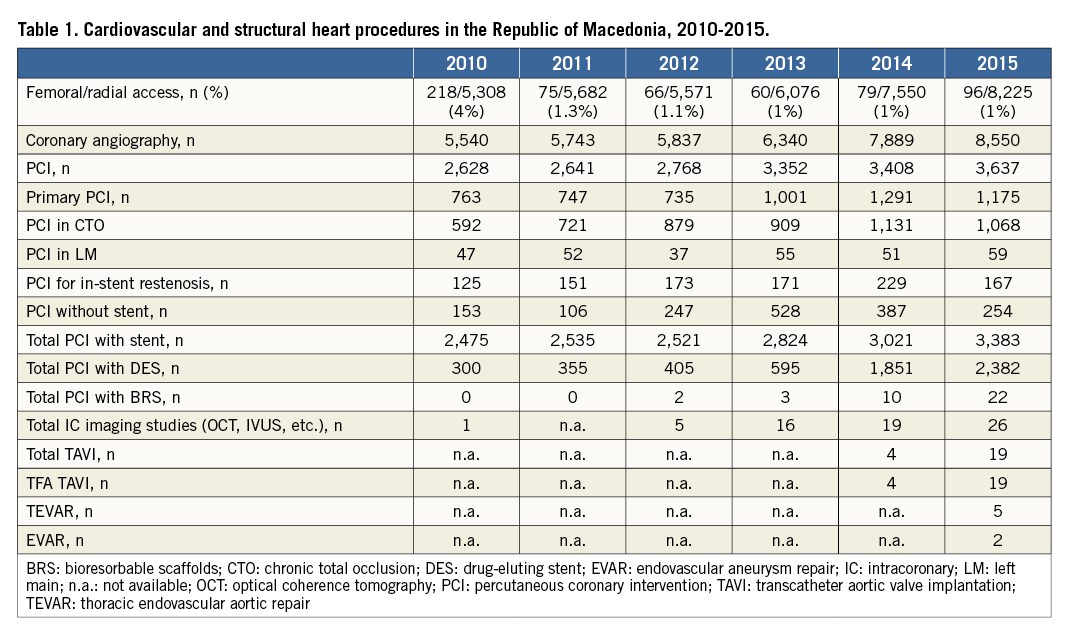 This was a nationwide study including all patients from a five-year period (January 2010 to December 2015) referred for cardiovascular angiography and/or intervention and structural heart procedures. All procedures were performed by experienced transradial operators (>500 diagnostic TRA procedures and >300 PCI procedures annually).

Decisions about clinical care were made on a case-by-case basis by the physicians caring for each individual patient. Basic information on procedural and patient characteristics was obtained from the national electronic health record system maintained by the Directorate for E-health within the Ministry of Health. More detailed information on the large subset of patients receiving care at the University Cardiology Clinic in Skopje was extracted from its cardiac catheterisation laboratory database.

PROCEDURE ROUTINE FOR ALL CATHETERISATION LABORATORIES IN MACEDONIA

Preprocedural retrograde radial arteriography was performed to define the radial artery anatomy from mid forearm to ulnobrachial anastomosis and to delineate ulnar artery anatomy as well, thus generating the access roadmap1. A solution of 3 ml of contrast diluted with 7 ml of blood was injected through the cannula or through the side arm of the sheath under fluoroscopy in PA projection. All patients since 2011 underwent RA angiography and, if there was some variation or tortuosity/spasm, it was negotiated under fluoroscopy control1.

Most anatomic variations, tortuous segments and loops can be traversed by “J” hydrophilic 0.025”-0.035” or by 0.014” guidewires under fluoroscopy.

The sheath was removed immediately after the procedure, regardless of the level of anticoagulation, and a compressive dressing (31%, n=9,540 of patients) or TR band (Terumo Corp.) (69%, n=21,308) was applied to the wrist. In order to decrease the rate of radial artery occlusion we applied patent haemostasis by using pulse oximetry to confirm haemoglobin oxygen saturation on the punctured radial artery (>90%), after haemostasis was obtained (during measurement UA was compressed manually). Compression was applied for an approximately three-hour period with gradual deflation of the TR band after the first hour.

Procedure time was defined as time from puncture until completion of the procedure.

Vascular access-site complications were defined as the occurrence of an aneurysm, fistula, haematoma or radial nerve injury.

Due to lack of sufficient data from other centres about risk factor distribution and procedural success and complications, we performed a subset analysis of the patients from the largest PCI centre in Macedonia which represented 80% of all cardiovascular and structural heart procedures in Macedonia.

The patient population was predominantly male (68%). The most common atherosclerosis risk factors were hypertension (55%), diabetes mellitus (18%) and smoking (25%).

Previous CABG was present in 241 (0.8%) patients and access was achieved predominantly through the right radial artery with cannulation of the left internal mammary artery (LIMA) with a Simmons II catheter or by using an IMA catheter and the method of cannulation of the LIMA from the right4.

Clinical radial artery spasm was present in 3.9% of patients. Access-site bleeding complications were present in 5.1% (n=1,579) of patients. Haematoma types 4 and 5 was present in 23 patients, and two (0.007%) of the patients needed vascular repair of the puncture site, but without further clinical consequences. No signs of hand ischaemia were detected at discharge or follow-up in any patient. There were no major access-site complications in the cases requiring femoral approach.

Structural heart interventions, including transcatheter aortic valve implantation (TAVI), were introduced in 2014 and 23 TAVI cases with the CoreValve/Evolut™ R (Medtronic Inc., Santa Rosa, CA, USA) have since been performed.

Thoracic and endovascular aortic repair (TEVAR and EVAR) procedures were started in 2015, with seven procedures carried out during the course of the year.

No left atrial appendage (LAA) closures and very limited patent foramen ovale (PFO)/atrial sepal defect (ASD) closures are performed in the catheterisation laboratories in Macedonia due to current reimbursement policies for these procedures from the national healthcare insurance.

TRA is now the preferred access site for PCI in experienced radial centres5. Considerable evidence supports conversion to the radial access for all angiographic diagnostic and interventional procedures, with an emphasis on decreasing access-site bleeding and vascular complications without sacrificing procedural success6-9.

Considering the recognition given by the European Association of Percutaneous Cardiovascular Interventions/European Society of Cardiology consensus document5, TRA should be the default approach for PCI in experienced transradial centres.

According to the national strategy, all catheterisation laboratories in Macedonia made an almost complete transition from TFA to TRA from 2007 to 201010. Since then, 96% of all cardiovascular interventions have been performed by TRA and no cases of hand ischaemia were registered post-procedurally or at follow-up.

However, femoral access expertise was preserved despite adopting the default radial-first approach. It was recently reconfirmed by the British Cardiovascular Intervention Society (BCIS) Registry that high-volume TRA PCI centres do not lose femoral skills over time11.

Nevertheless, it is important to emphasise the importance of providing sufficient TFA exposure so that operators/fellows do not lose their femoral access skills as they adopt the radial-first approach.

Our country has also adopted a strategy for routine preprocedural radial angiography before every cardiovascular procedure. We have shown that preprocedural radial artery angiography (in over 19,292 patients) provides a roadmap for successful arterial access and decreases the crossover rate, and bleeding and vascular complications. It enables a tailored approach based on RA anatomy and required devices (e.g., safe use of large bore sheaths)1.

From 2010 to 2015, the annual number of PCIs in general, and PPCIs in particular, increased by 40-50%. Structural heart disease procedures, principally TAVIs, were also becoming more frequent, but endovascular diagnostic and intervention procedures remain uncommon in Macedonia.

Macedonia has successfully adopted a national strategy of radial arterial access first, followed by routine radial arteriography, with excellent procedural technical success and vascular complication rates concomitant with the increase in procedural complexity. Our results should encourage other centres to implement the recent guidelines to increase the frequency of wrist access for invasive cardiovascular procedures.

Poland: coronary and structural heart interventions from 2010 to 2015