Aims: We sought to assess the impact of low-profile sheaths on vascular complications during transfemoral transcatheter aortic valve replacement (TAVR).

Conclusions: The introduction of lower-profile sheaths has dramatically reduced the incidence of vascular complications after transfemoral TAVR, thus enhancing the safety of the procedure.

Vascular complications are an important cause of morbidity and mortality in transfemoral transcatheter aortic valve replacement (TAVR)1,2. In early large registries/trials, transfemoral arterial access was associated with vascular complications in 11-18% of procedures1,3. Careful patient selection, with comprehensive analysis of the femoral and iliac anatomy (including identification of size, calcification and tortuosity), integration of multidetector computed tomography, and operators’ expertise have decreased these complications4-6. New-generation devices have incorporated lower-profile delivery catheter systems which go through ultra-low-profile sheaths (down to 14 Fr, which expand up to 16-18 Fr). Whether these new low-profile devices reduce vascular complication and bleeding rates in patients undergoing TAVR is unknown. We sought to assess the impact of low-profile sheaths (≤18 Fr) on vascular complications and bleeding during TAVR.

In this retrospective case series the current study population comprised a total of 375 patients who underwent transfemoral TAVR from January 2008 to November 2012. Of these, 204 (54.4%) underwent TAVR using 14-18 Fr sheaths (low-profile sheath [LPS] group), and 171 (45.6%) using 19-24 Fr sheaths (high-profile sheath [HPS] group). One hundred and four patients treated using surgical femoral cut-down or using a fully percutaneous approach before 2008 were excluded from this analysis in order to reduce the impact of the learning curve on the primary outcomes. All patients gave written informed consent.

Two types of expandable sheath were utilised. The Edwards eSheath features a dynamic expansion mechanism (DEM) that allows for transient sheath expansion during valve delivery. Immediately after the transcatheter heart valve passes through the sheath, the DEM allows the sheath to return to a low-profile diameter7. This reduces the time the access vessel is expanded, thereby hypothetically minimising the risk of vascular trauma. The 14 Fr SoloPath balloon-expandable introducer consists of a flexible, reinforced polymer sheath with a specially folded distal end (the sheath) pre-mounted over a central balloon dilatation catheter (the expander). The folded distal region of the sheath is small in diameter, thus facilitating passage even through calcified and tortuous arteries. Once inserted into the femoral artery and routed to the abdominal aorta, the SoloPath expander is inflated for 60 seconds, deflated, and then removed leaving a large central lumen (up to 21 Fr) extending from the proximal end to the distal end of the sheath.

Regardless of sheath size, femoral haemostasis was accomplished by percutaneous closure with either the ProStar XL or Perclose ProGlide devices (Abbott Vascular Inc., Santa Clara, CA, USA). Prophylactic placement of a crossover wire from the contralateral femoral artery8 or from the radial artery9 was not performed in any patient. Protamine was utilised occasionally in cases of persistent bleeding.

Peripheral access evaluation was accomplished with angiography of the descending aorta, iliac and femoral arteries, measuring the minimal lumen diameter to the level of the femoral head, and with multidetector computed tomographic angiography (MDCT) by measuring the minimal lumen diameter using a centreline technique. Fluoroscopic calcification was graded as none, mild (some calcification), moderate (the course of the artery can be seen without injection of contrast dye), or severe (heavily calcified iliofemoral arteries). MDCT calcification was graded similarly.

Continuous variables were presented as mean±SD and compared with the use of the paired or unpaired t-test, as appropriate, in case of normal distribution, or the Wilcoxon or the Mann-Whitney test, as appropriate, in case of non-normal distribution. Categorical variables were presented as counts and percentages and compared with the use of Fisher’s exact or χ2 test, as appropriate. Odds ratios (ORs) and 95% CIs were calculated for multivariate predictors of major and minor procedural vascular complications. Variables were included if they were found significant at 0.20 at univariate analysis and removed in a stepwise selection process on the basis of a significance level of 0.10. A two-sided p-value of less than 0.05 was considered to be of statistical significance. All data were processed using the Statistical Package for Social Sciences, version 17 (SPSS, Chicago, IL, USA). Outcomes were defined according to the Valve Academic Research Consortium (VARC)-2 definitions10.

Baseline clinical characteristics are presented in Table 1. The mean ages of the patients were 82.0±10.2 and 81.1±9.8 years in the LPS and HPS groups, respectively (p=0.397). The use of low-profile and high-profile sheaths over time is depicted in Figure 1. Patients who had transfemoral TAVR with low-profile and high-profile sheaths differed from each other with respect to two preoperative characteristics: female gender (54.9% vs. 21.1%, p<0.001) and prior myocardial infarction (19.1% vs. 30.4%, p=0.011). There were no significant differences in STS score, peripheral vascular disease, porcelain aorta, diabetes mellitus and prior percutaneous coronary intervention. Angiographically, patients within the LPS group had a lower mean femoral diameter (7.2±1.2 vs. 7.8±1.1 mm, p<0.001), and a lower sheath external diameter/minimal femoral artery diameter ratio (0.98±0.17 vs. 1.04±0.18, p=0.005). Similar findings were reported when the femoral artery diameter was measured by using MDCT (Table 1). 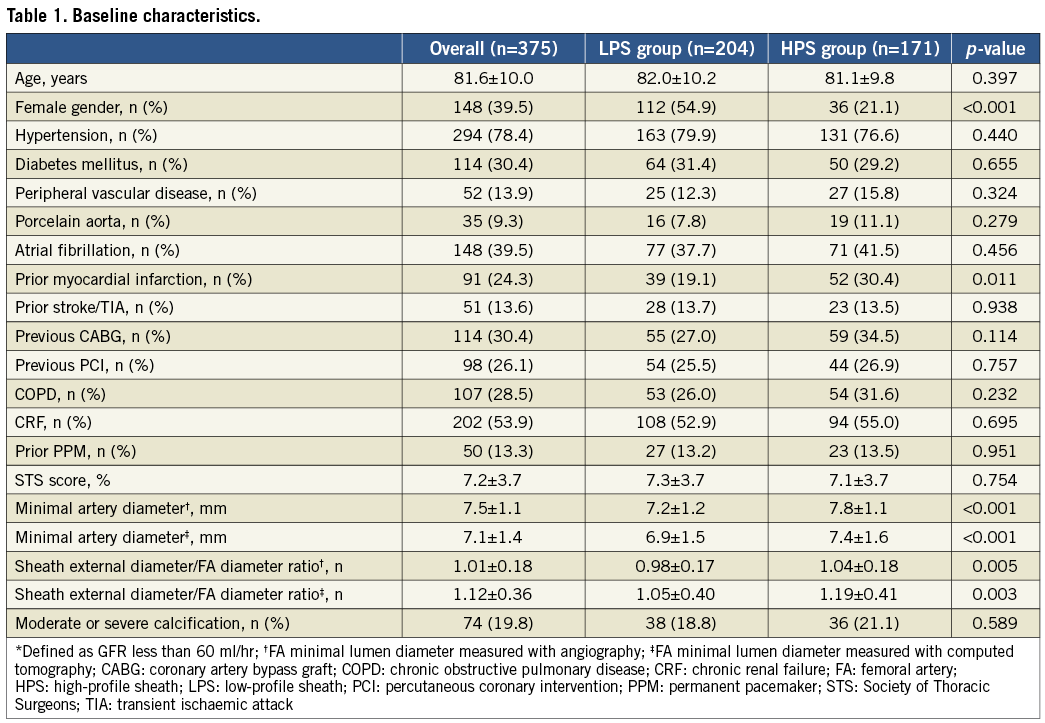 Figure 1. Use of low-profile and high-profile sheaths over time. 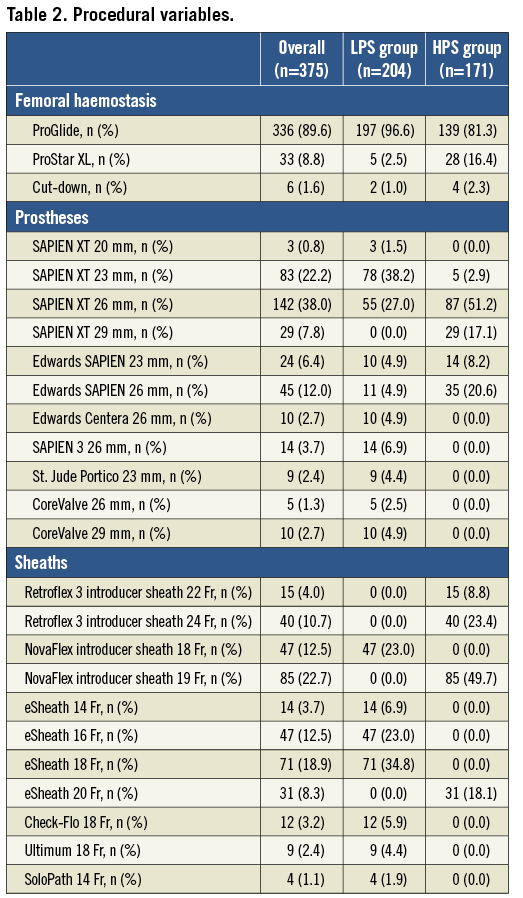 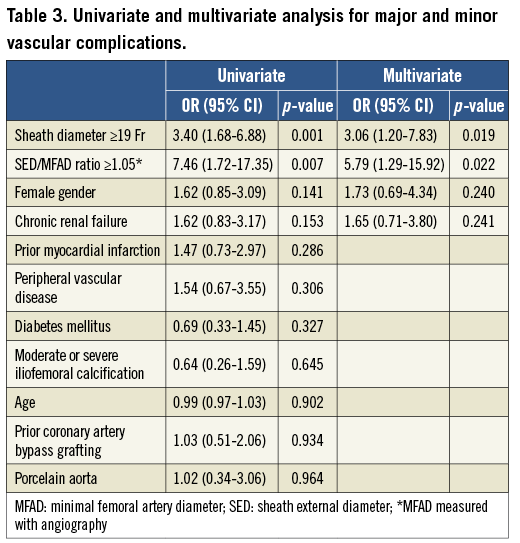 Figure 2. Difference in rates of VARC-2 defined vascular complications and bleeding between patients having transfemoral TAVR with low-profile (≤18 Fr) and high-profile (≥19 Fr) sheaths. 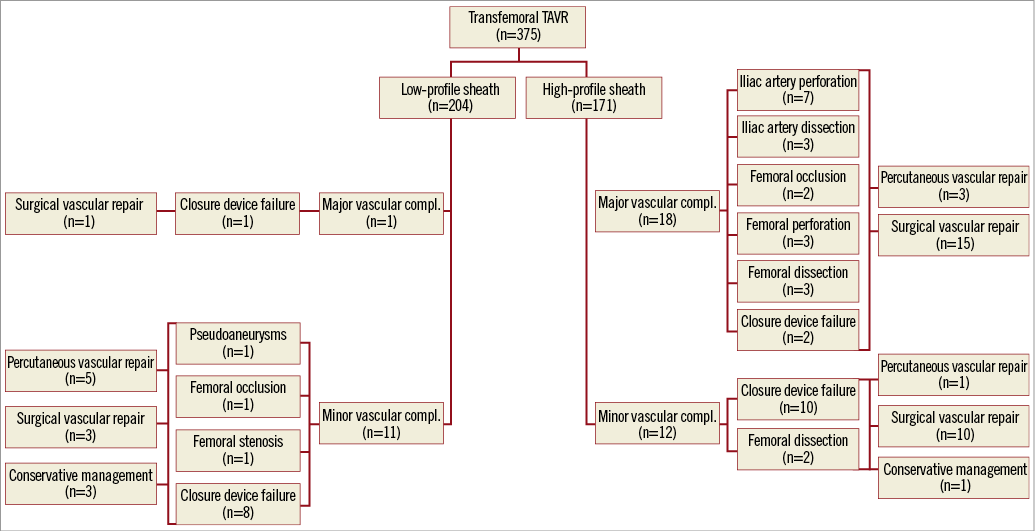 Figure 4. Difference in rates of VARC-2 defined vascular complications and bleeding between patients having transfemoral TAVR with expandable and non-expandable sheaths.

In-hospital clinical outcomes are summarised in Table 4. There were no differences between groups in terms of mortality (4.9% vs. 5.3%, p=0.874), myocardial infarction (1.5% vs. 0.6%, p=0.380) and VARC-2 defined acute kidney injury (Table 4). On the other hand, a significantly higher rate of disabling stroke was reported in the HPS group (0.5% vs. 1.7%, p=0.042). In keeping with a higher incidence of vascular complications in patients who had ≥19 Fr sheaths there was a trend to increased all VARC-2 defined bleeding rates between groups (4.9% vs. 8.8%, p=0.135) and a significant increase in the composite endpoint of life-threatening and major bleeding in the HPS group (3.4% vs. 8.2%, p=0.046). Finally, HPS patients had a longer mean length of in-hospital stay following the procedure as compared with LPS patients (5.0±5.0 vs. 6.5±6.3 days, p=0.032). Table 5 illustrates in-hospital outcomes in patients with versus without major vascular complications.

In contrast, unplanned vascular surgery was dramatically more frequent in the HPS group (14.6% vs. 1.9%). TAVR procedures using ≥19 Fr sheaths were associated with a more than threefold risk of any vascular complications, regardless of the presence of peripheral vascular disease, the severity of calcifications, and the ratio between minimal femoral artery and external sheath diameters. Prophylactic placement of a crossover wire from the contralateral femoral artery8 or from the radial artery9 was not performed in any patient. However, these approaches may be reasonable even in combination with low-profile sheaths in certain circumstances, such as when the iliofemoral system is unfavourable or in the presence of obesity. On the other hand, we found protamine administration after sheath removal along with temporary mild external compression particularly useful in cases of persistent oozing.

The vast majority of cases (65%) in the LPS group (44% of the entire population) were performed using the Edwards expandable introducer sheath. This sheath incorporates a compliant seam that allows transient expansion as the delivery catheter is passed through it7. The SoloPath introducer was used in only four cases. The 14 Fr SoloPath balloon-expandable introducer is another expandable sheath currently under evaluation. This novel sheath has been used for CoreValve implantation in the case of a heavily calcified iliac-femoral axis; however, no data on its effectiveness in reducing vascular events are available yet. In this particular subgroup of patients using expandable sheaths, the outcomes in terms of vascular complications were excellent with no report of major vascular access-site complications, and with 4.3% of patients having a minor vascular complication.

TAVR using low-profile sheaths was associated with a lower rate of life-threatening and major bleeds. Although this did not impact on in-hospital mortality in the current study, larger studies might be anticipated to demonstrate mortality benefit, as bleeding is a well-established predictor of poor late outcomes17.

This report is observational by nature summarising a single-centre experience and thus it is not disencumbered from the usual biases that stem from the non-randomised nature of the study cohort. In addition, the variety of different sheaths used may have posed an additional bias. Although we excluded patients from the very early experience with transarterial TAVR it is likely that there was a continued learning curve with respect to patient selection and the avoidance and management of vascular complications.

The introduction of lower-profile sheaths has dramatically reduced the incidence of vascular complications following transfemoral TAVR. The introduction of a very low-profile delivery system may allow application in a wider population of patients with smaller and more diseased peripheral arteries than has previously been the case.

J.G. Webb, J.G. Cheung, R.K. Binder, D.A. Wood and J. Ye are consultants for Edwards Lifesciences. The other authors have no conflicts of interest to declare.

Stent-related defects in patients presenting with stent thrombosis: differences at optical coherence tomography between subacute and late/very late thrombosis in the Mechanism Of Stent Thrombosis (MOST) study