Denmark: coronary and structural heart interventions from 2010 to 2015

Interventional cardiology in Denmark has been carried out since the mid 1980s. Interventional cardiology is only performed at a few high-volume centres. Healthcare coverage is universal and is essentially free of charge. Hospitals are mostly publicly owned and financed by fixed budgets and, in part, an activity-based funding system. Approximately 30,000 coronary angiographies (CAG), 10,000 percutaneous coronary interventions (PCIs) of which approximately 25% are primary PCIs, and 500 transcatheter aortic valve implantations (TAVIs) are carried out each year. The numbers of CAG and PCI have reached a plateau in recent years, whereas structural heart interventions, in particular TAVI, are increasing. Around 90% of all patients treated with PCI have a stent implanted, with more than 95% of these being drug-eluting stents. There is a low but increasing use of bioabsorbable scaffolds and drug-eluting balloons.

Interventional cardiology in Denmark has been carried out since the mid 1980s and has only been performed at a few high-volume centres. Since the late 1990s it has been mandatory for the interventional institutions to report their activity in two separate databases covering east (Web-PATS) and west Denmark (Western Denmark Heart registry [WDHR]), respectively. These databases contain all data on interventional procedures. Data on activity, mortality and complications are merged into a common Danish database (Danish Heart Registry [DHR]) supported by the Danish Health Authority, in order to supervise quality and facilitate research.

The joint European Society of Cardiology (ESC) and European Association of Cardiothoracic Surgery (EACTS) guidelines on coronary revascularisation were recently published1 and endorsed by the Danish Society of Cardiology with minor changes, thus securing uniform adoption and performance of interventional procedures throughout the country.

In Denmark, healthcare coverage is universal and is essentially free of charge. Hospitals are mostly publicly owned (approximately 99%), administered by the five regions, and financed by fixed budgets and, in part, an activity-based funding system.

There are three levels of institution performing interventional procedures: centres only performing coronary angiographies (CAG) (six institutions), so-called CAG satellites; centres only performing planned percutaneous coronary intervention (PCI) (two institutions); and highly specialised heart centres (four institutions) performing both primary PCI and elective PCI. According to the Danish Health Authority, a highly specialised heart centre needs a 24/7/365 presence from specialists in cardiology and cardiothoracic surgery, the presence of collaborating specialties, including intensive care units, teaching and educational abilities, performance of no fewer than 1,000 annual PCI procedures, and the ability to assess and perform complex and/or high-risk procedures. In addition, these centres should have multidisciplinary Heart Teams to aid decision making in patients with complex cardiovascular disease.

By law, patients are guaranteed a medical workup within one month. In patients with suspected stable coronary artery disease, the Danish regions are urged to guarantee a diagnostic evaluation within two weeks. Patients hospitalised with a non-ST-elevation myocardial infarction or unstable angina are referred for CAG within 48 hours. After the results of the DANAMI 2 trial2, primary PCI for ST-elevation myocardial infarction (STEMI) was immediately implemented as standard therapy, wherefore patients presenting with STEMI are evaluated with a dedicated prehospital triage programme and transferred immediately by ground or air transport to the nearest primary PCI centre. The programme has been described previously3. 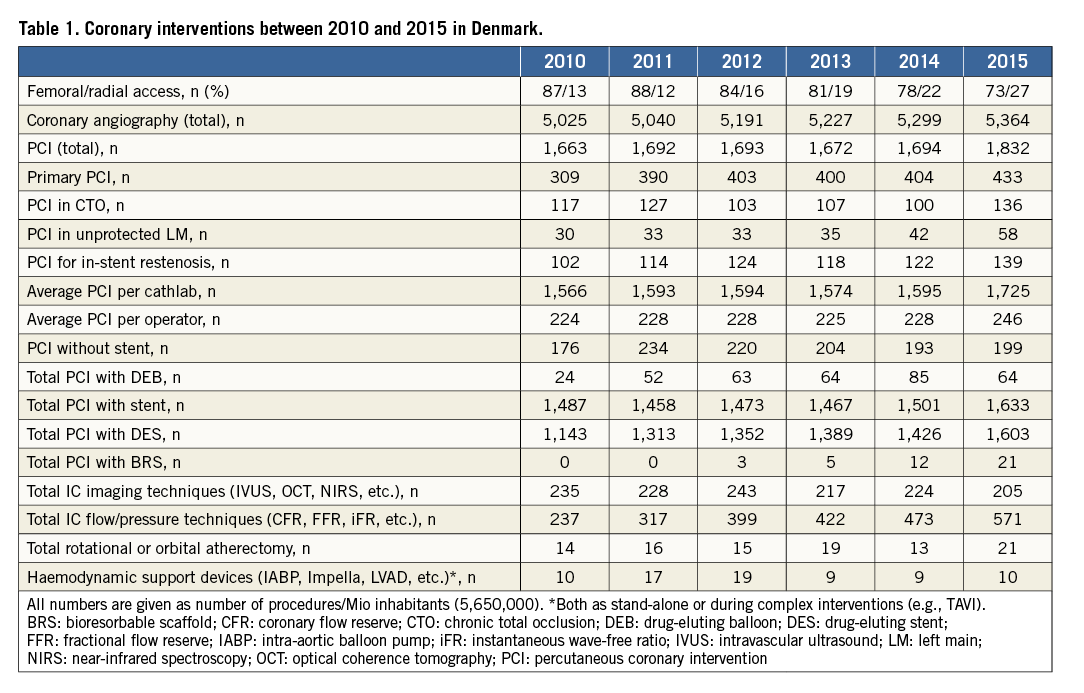 For many years the Danish heart centres have had a broad international interventional cooperation, with young fellows working abroad as part of their training and international fellows invited to develop their skills in Denmark.

In recent years, the number of CAG has reached a plateau at around 30,000 procedures a year. From 2010 to 2015 there was a small increase in the number of PCIs performed (from 9,847 in 2011 to 10,662 in 2015) and the number of coronary artery bypass grafts (CABG) has been stationary at around 2,000 procedures per year. The revascularisation rate (PCI/angiography) has remained almost unchanged over the period, with approximately 33% of the angiographies resulting in a PCI procedure. This figure is higher than that previously reported in Ireland (2004 to 2011)5, where the revascularisation rate had decreased to 27.9%. The reason for the higher rate might be due to non-invasive testing being used frequently before referring patients suspected for stable angina to coronary angiography. The proportion of revascularised patients in the setting of stable angina, non-ST-elevation acute coronary syndromes (NSTEACSs), and STEMI is stationary and equally distributed across the three patient groups. The adoption of radial access as the preferred access route for interventional procedures is increasing, though the femoral approach is still used in the majority of interventions. However, the use of the radial access more than doubled between 2010 and 2015. This evolution is expected to continue, making the radial approach the preferred access route in the near future as new generations of interventionalists are entering the field. Indeed, all fellows and recently trained operators are using radial access as the primary access site for their procedures. Fractional flow reserve (FFR) measurements are increasingly applied and are now used in approximately 40% of non-primary PCIs. The use of intracoronary imaging has essentially remained unchanged in the time period. All highly specialised centres started a CTO programme around 2010, such that the number of CTO PCIs performed in the period from 2010 to 2015 remained unchanged, with the proportion of CTO PCIs being around 25% of the total number of PCIs. Importantly, the centralised organisation of interventional cardiology is mirrored by the number of procedures per catheterisation laboratory and per interventional cardiologist. Indeed, a very high proportion of Danish interventionalists may be characterised as high-volume operators.

Most PCIs result in stent implantation with a very high proportion of drug-eluting stents versus bare metal stents. Drug-eluting balloons and bioabsorbable vascular scaffolds are only used in a very small proportion of revascularisations.

In the period from 2010 to 2015 there was a marked increase in the total number of structural interventions (Table 2). Indeed, TAVI procedures tripled (from 163 in 2010 to 527 in 2015) and LAA closure procedures have increased ninefold to a total of 79 in 2015. Importantly, femoral TAVI implantations have for several years mainly been performed under local anaesthesia. Patent foramen ovale closure was carried out more frequently in 2014 and 2015, whereas only minor changes in closure of atrial septum defects (ASDs) and ventricular septal defects (VSDs) were observed. Likewise, the number of percutaneous mitral valve interventions (MitraClip® [Abbott Vascular, Santa Clara, CA, USA] and balloon valvuloplasty) remained essentially unchanged.

Egypt: coronary and structural heart interventions from 2010 to 2015