Contemporary retrograde approach for the recanalisation of coronary chronic total occlusion: on behalf of the Japanese Retrograde Summit Group

Aims: The retrograde approach to CTO is promising, but questions remain with regard to its wider application and the potential risks. This study evaluated the feasibility and efficacy of retrograde recanalisation of chronic total occlusion (CTO) of the coronary arteries.

Methods and results: A total of 378 consecutive patients (previously failed PCI 32.0%) who enrolled in 27 institutions in Japan underwent retrograde recanalisation for CTO. We analysed the data on lesion characteristics, procedural materials, technique used, complications and clinical outcomes. Successful retrograde recanalisation was achieved in 70.4% and the overall procedural success was 83.6%. Collateral crossing was achieved via a septal route in 68.9%, epicardial in 27.2% and bypass grafts in 2.6%, respectively. The retrograde approach was completed with implementation of reverse CART in 42.5%, direct wire crossing in 23.1%, bilateral wiring in 22.7%, and CART in 11.7%. Major and minor collateral injuries and coronary perforations were noted in 1.3%, 10.3% and 2.9% of cases, respectively. Stroke occurred in 0.3%, QWMI and emergency PCI in 0.3% of patients with successful recanalisation.

Conclusions: Wider application of retrograde CTO PCI achieved a high rate of success in recanalisation with an acceptable rate of complications in Japan.

Despite the recent wider availability of certain devices, such as dedicated CTO wires, microcatheters, and re-entry devices1, and novel strategies, such as the parallel wire method2, intravascular ultrasound-guided PCI3,4 and the STAR technique5, they are used mainly by dedicated CTO operators. With the advent of drug-eluting stents and antiplatelet therapy, a marked reduction of target vessel revascularisation has been achieved compared with bare metal stents6. The same holds true in CTO PCI, from the procedure when the CTO was crossed with a guidewire and implanted with DES7.

Conventional antegrade CTO PCI remains suboptimal with a success rate of 65-70% worldwide8, 9, mainly due to the inability to pass the guidewire into the distal true lumen. A retrograde approach through well-developed collateral arteries was introduced to improve further the success rate of complex CTO10-12. In 2005, the CART (controlled antegrade and retrograde subintimal tracking) method was developed by Dr Osamu Kato: this consists of antegrade guidewire placement through the CTO site where retrograde balloon dilation creates a local subintimal dissection in order to facilitate wire crossing to the distal true lumen13. However, this novel approach is still limited in application to well-developed, accessible septal collateral channel cases. By 2008, the concept of a channel dilator materialised as the Corsair microcatheter (Asahi Intecc Co., Ltd, Aichi, Japan), which enables the operator to pass a guidewire to the distal end of the CTO through any type of collateral channel14. With this new microcatheter, reverse CART has gained popularity. Therefore, we studied how this series of evolving retrograde techniques has, in practice, been adopted in CTO centres in Japan, and we analysed the widespread utility with regard to the success rate, procedure-related complications and in-hospital outcomes.

From January 2009 to December 2009, planned PCIs were conducted in a total of 14,381 cases among the 27 institutions in Japan, and 1,542 (10.7%) cases were CTO PCI. Among them, 378 cases (24.5%; 378 CTO lesions) utilised a retrograde approach (Appendix 1). CTO PCI was indicated either for symptomatic relief or in the presence of ischaemia in the CTO distribution. The procedures were performed by board-certified interventional cardiologists, who had at least several years’ experience of CTO PCI and who had completed the retrograde course (the live demonstration and lectures) held in Japan. Informed consent was obtained in all cases according to the protocol of each institution.

CTO was defined as a lesion with TIMI flow grade 0 of >3 months duration, estimated from symptom onset, change in angina status, history of MI and previous angiography. Q-wave and non-Q-wave myocardial infarctions (MI) were defined as consistent ECG changes, of a greater than threefold increase of a cardiac enzyme (creatine kinase-myocardial band, CK-MB), with or without the development of Q-waves, respectively.

CTO anatomy was evaluated by simultaneous double injection. Major collateral channel injury was defined as a collateral channel rupture or perforation which required specific treatment, such as coil or own-tissue embolisation, or surgical treatment, whereas minor injury was defined as requiring no further treatment. Major adverse cardiac events (MACE) were defined as any of the following at the time of admission: death, stroke, Q-wave MI, or emergency target vessel revascularisation. The CK-MB was not measured routinely post procedure, unless symptomatic recurrence or haemodynamic instability developed. The retrograde approach was defined as CTO PCI with an effort to cross the collateral channels with a guidewire so as to reach the distal CTO. The procedural decision was completely at the operator’s discretion. Technical success was defined as an achievement of patent vessels, <30% residual stenosis and a TIMI flow grade 3. All CTOs, once crossed with a guidewire, were treated by DES unless otherwise indicated. The Corsair (Asahi Intecc Co., Ltd) is a microcatheter specifically designed for facilitating collateral channel crossing, retrograde wire control and CTO crossing.

All patients were pretreated with aspirin and clopidogrel or ticlopidine, and weight-adjusted heparin was administered to maintain activated clotting time (ACT) for >300 seconds. Double guide catheters (7 Fr or 8 Fr) were introduced both for the CTO and for the donor side of the coronary arteries. Contrast was injected simultaneously to evaluate CTO morphology and to focus on a potential collateral channel reaching the distal CTO. A soft polymer jacket wire over a microcatheter, an OTW balloon or a Corsair was inserted in alternating fashion through the collateral channel to reach the distal CTO segment, where a retrograde CTO crossing was performed with either softer polymer jacket wires or stiffer CTO wires. Some of the cases were treated with direct wire crossing, bilateral wiring (including kissing and knuckle wire techniques), but the wire tended to go into a CTO false lumen in most cases.

The baseline demographics, angiographic characteristics, procedural data and in-hospital events were prospectively collected on a standardised data sheet and retrospectively analysed. Data submission was on a voluntary basis, but data collection was encouraged to reflect all of the consecutive CTO PCI using the retrograde approach. Results were compared between patients who underwent successful retrograde PCI (retrograde success [RS], n=266) and those without successful PCI (retrograde failure [RF], n=112).

P-values of <0.05 were considered statistically significant and a logistic regression model was applied to identify the factors which contributed to retrograde procedural success. 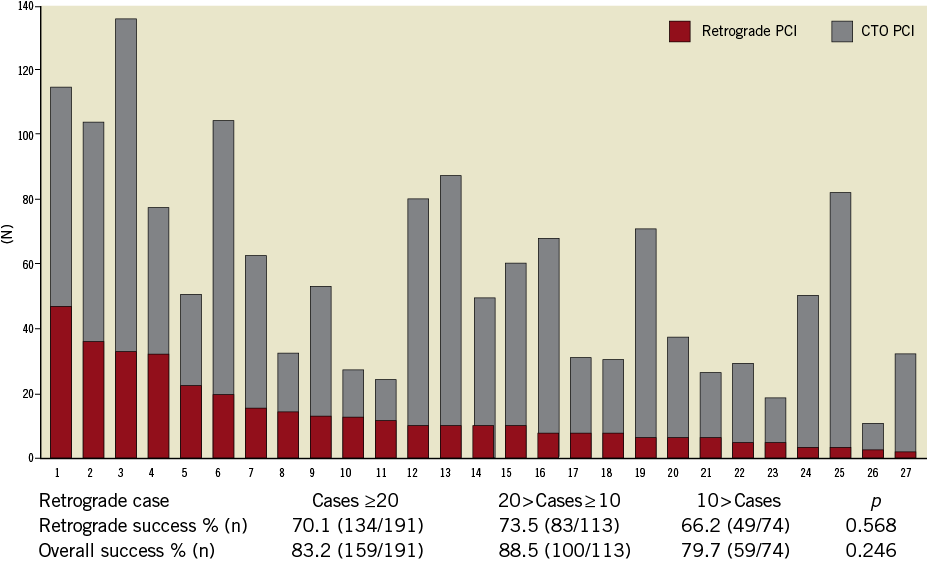 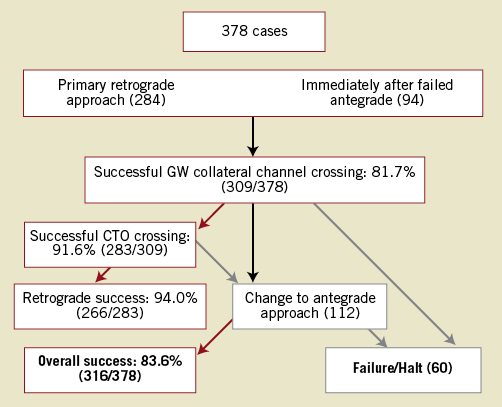 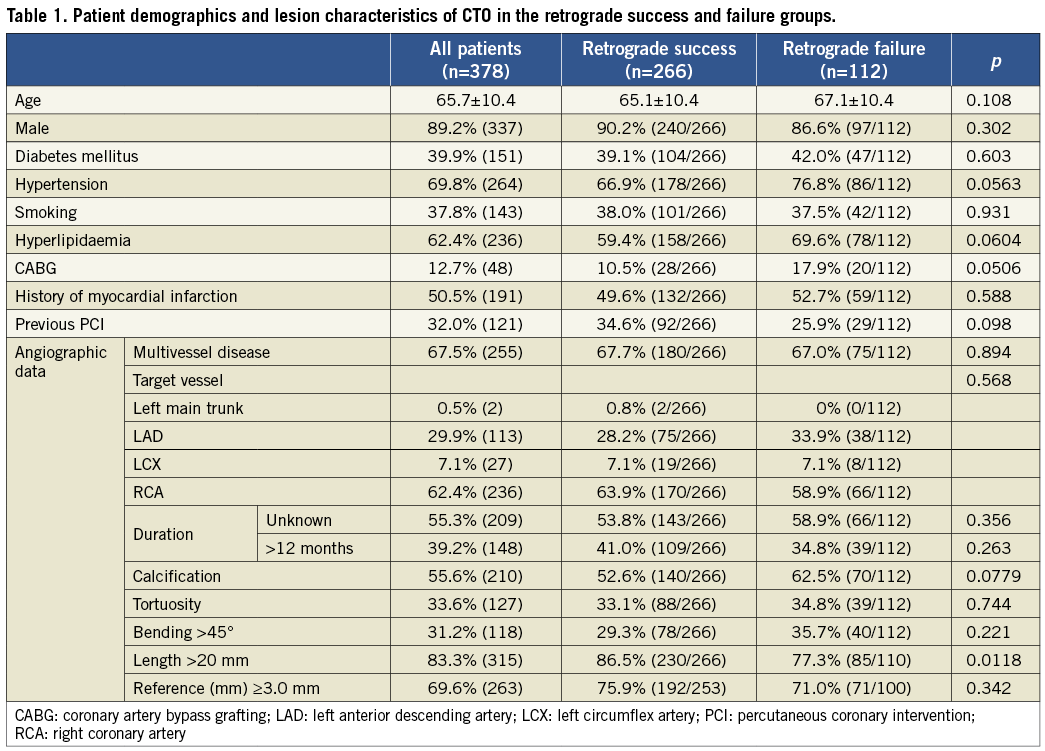 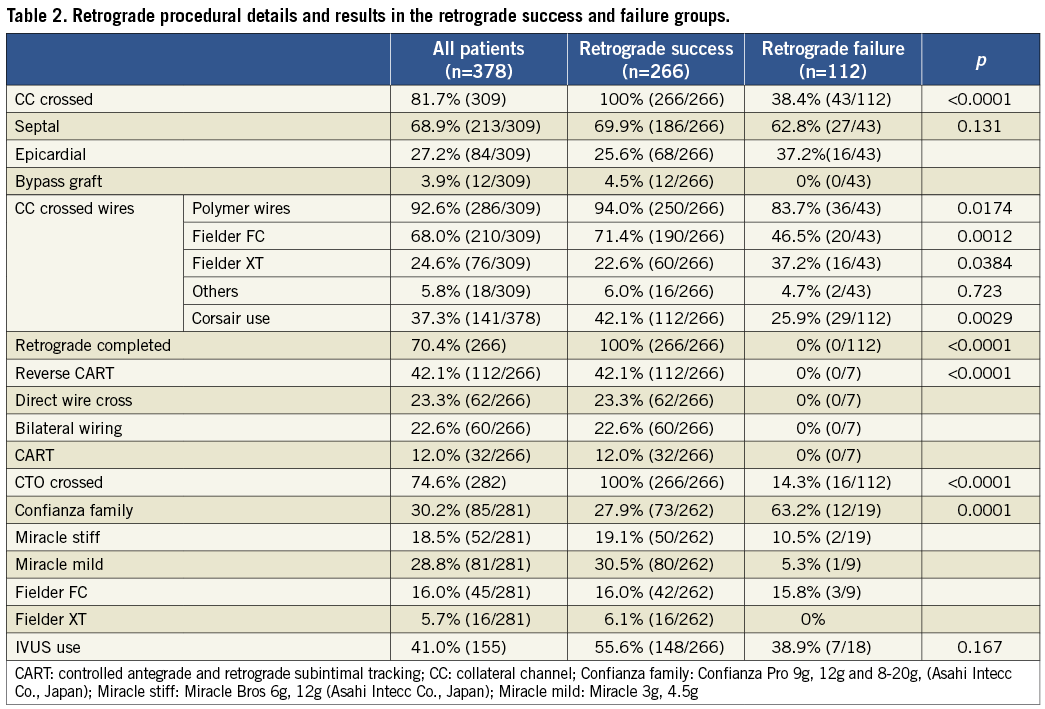 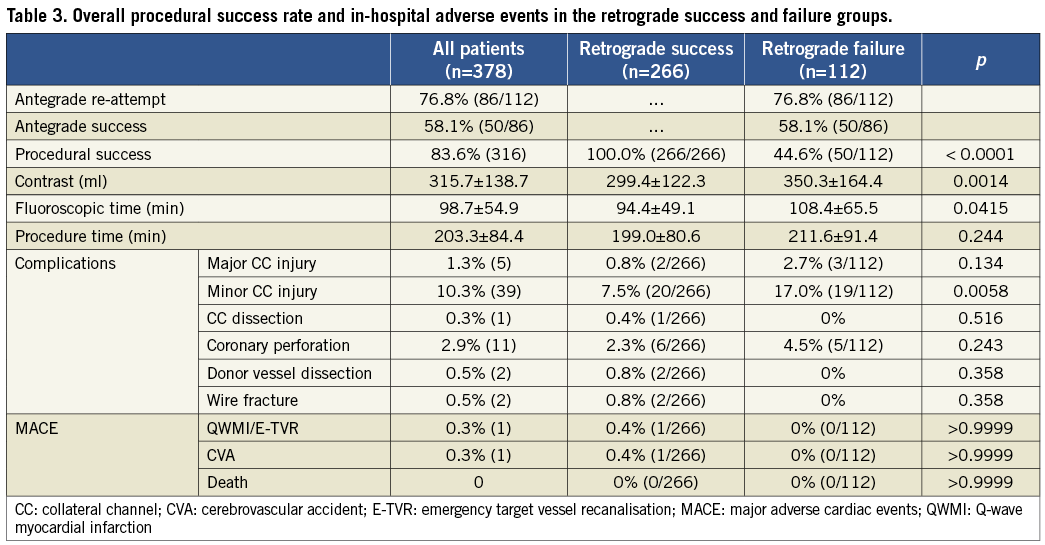 Coronary perforation developed in 2.3% (6) in the RS group, three treated by prolonged balloon inflation, two by covered stents, and one by clot embolisation. Among the 4.5% (5) in the RF group, four were treated by balloon inflation and one by a covered stent (p=0.243). None of them required emergency pericardiocentesis. Collateral channel dissection was noted in 0.4% (1), donor vessel dissection in 0.8% (2) and wire tip fracture in 0.8% (2) in the RS group, without any clinical sequelae.

USE OF THE CORSAIR VS. OTHER SYSTEMS (Table 4)

The results of logistic regression analysis are shown in Table 5. There was no difference between the groups in gender, hypertension, CABG, previous PCI, calcification, >20 mm lesion length, >45° bending, tortuosity, RVD ≥3.0 mm and use of the Fielder FC wire. Corsair use was, however, found to be a significant contributor to successful recanalisation (p=0.0292, CI: 0.149-0.945). 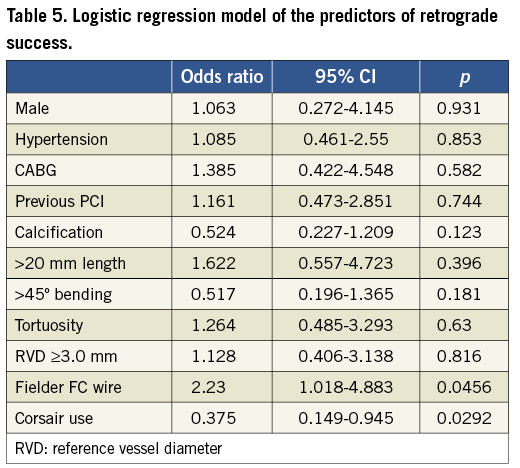 This is the largest retrograde CTO PCI series, involving 27 Japanese institutions across the country. A wide application of contemporary retrograde PCI achieved a high rate of recanalisation in complex CTOs with few in-hospital complications in experienced hands. Although use of the Corsair was not randomised, it appears to have been a contributor to retrograde procedural success. Despite the difference of CTO and retrograde volume in each institution, the success rate did not differ significantly in the three separate classes (Figure 1).

Kimura et al reported the results of a 224-case CART registry (64.7% previously failed PCI) of two highly experienced CTO operators, and demonstrated collateral channel crossing in 87.7%, retrograde success in 83.5%, and overall success in 90.6%17. Despite differences in retrograde (re) entry, however, multicentre registries with multiple operators tend to have a lower success rate in overall recanalisation, probably due to operator experience, case selections and difference in management when the initial attempt failed. Limited operator performance could have explained the lower than anticipated success rate of antegrade (re) entry (58.1%) in the RF group, once the procedure had developed in an unfavourable direction.

In terms of CTO crossing wires, the RS group was characterised by a significantly greater use of softer wires, compared to stiffer wires in the RF group, suggesting a potential advantage of retrograde implementation in CTO crossing.

In the Sianos series, 8.6% developed retrograde-related complications, including collateral channel perforation or haematoma in 6.9%, donor artery dissection in 1.1%, and wire entrapment in 0.6%15. In the Rathore series, 15.6% developed retrograde complications, including collateral channel dissection in 10.6%, septal perforation in 3.9% (0.6% (1) required coil embolisation), dissection in 0.6%, and delayed cardiac tamponade in 0.6%, the last of which necessitated pericardial drainage16.

Both groups had very large contrast volume and long fluoroscopic times, with significantly unfavourable profiles in the RF group.

Tsuchikane et al reported that application of the newly developed Corsair microcatheter achieved a higher recanalisation rate in 98.8% (n=93), compared with the non-Corsair group (92.5%; n=93) after successful wire crossing through the collateral channel (p=0.030)14. The study reported that the Corsair was also associated with a higher collateral channel crossing in 96.8% and CTO crossing in 84.0%, without increasing major or minor collateral channel injuries, quite consistent with our findings. They applied a retrograde approach, predominantly via reverse CART in 60.9%, retrograde crossing in 20.6% of the Corsair group, whereas CART was used in 64.0% and retrograde wire crossing in 24.4% of the non-Corsair group (p<0.0001). They reported that total fluoroscopic time and the whole procedure time tended to be shorter in the Corsair group (60.1±26.3 vs. 67.8±29.1 min, p=0.087 and 135.6±57.4 vs. 155.5±65.0 min, p=0.078, respectively). This report also found the same trend in favour of the RS group, which suggests a potential refinement of the retrograde approach by using dedicated devices.

In a logistic regression model, use of the Corsair was found to be the only factor associated with successful retrograde recanalisation, thus emphasising the potential benefit of new device technology.

This was a retrospective observational study, which inherently had certain shortcomings. The major disadvantage was the lack of standardised protocol for measuring the post-PCI CPK and detailed analysis of collateral channels, which may have led to the underestimation of the rate of MI and contributor(s) of successful collateral crossing, respectively. Also, use of the Corsair was not randomised. The procedure time was a poor indicator of irradiation dose, since actual calculated doses of radiation could have been recorded in terms of Air Kerma with modern digital equipment. Lack of long-term follow-up beyond hospital admission is another disadvantage, especially in terms of contrast-induced nephropathy and late irradiation injuries. Nonetheless, a wider application of the retrograde approach may change the way we treat CTO, considering the similar high success rate across the globe in dedicated CTO centres in Europe and the US15,18. Further larger prospective studies, based on consecutive patient enrolment with a rigorous protocol, are required to determine the optimal PCI approach in patients with CTO and persistent ischaemia.

Wider application of the retrograde CTO approach provides an excellent chance of successful recanalisation with very few serious complications. However, this requires dedicated devices and advanced technical skills to minimise adverse events. Implementation of the reverse CART method, in conjunction with Corsair, will facilitate the retrograde procedure with less contrast and radiation in properly trained hands.

We sincerely appreciate the dedicated CTO pioneering efforts of Drs Osamu Kato, Takahiko Suzuki and the late Hideo Tamai for the development of the modern retrograde approach to CTO PCI.