Comparison of cardiac computed tomography angiography and transoesophageal echocardiography for device surveillance after left atrial appendage closure. What we see depends on where we are looking from and what we are looking for

Left atrial appendage occlusion (LAAO) for the prevention of cardioembolic strokes in patients with non-valvular atrial fibrillation (NVAF) is being performed with increasing frequency1,2. Although there is only one device approved in the USA, European and other countries have the advantage that several devices are either undergoing clinical testing or are already approved. As the field evolves, now that procedural safety issues have been largely resolved and long-term efficacy established, two items have become of increasing concern – device-related thrombus (DRT) and residual leak. Both were described early in the field but have now been accorded more interest because they might affect longer-term outcomes with the potential for adverse events as well as the need for implementing different preventive and therapeutic strategies.

The field of imaging post LAAO has been part of the whole process of care for LAAO since its inception. This was integral as both of these issues – DRT and residual leak – could potentially be identified by transoesophageal echocardiography (TEE) and/or cardiac computed tomography angiography (CCTA).

The article by Qamar et al3 in this issue of EuroIntervention is an important piece that sheds light on imaging for these issues.

They report on their single-centre series of 102 patients treated with LAAO who underwent both TEE and CCTA post procedure. The goal was to evaluate the role of CCTA compared with what has been and still is the standard of care, namely TEE. The studies were performed at slightly different time points following implantation as part of their routine care at 105.2±54.8 days for CCTA and 124.9±100.3 days for TEE.

There is substantial discussion in the paper on the performance of CCTA and the definitions used; this may indicate that the application of this technology may not be readily transferable to many hospitals engaged in a routine follow-up of these patients. Not only are there scanner issues, but there are also operator-dependent evaluation issues with CCTA technology. This is in contrast to TEE which, while also susceptible to operator-dependent analysis, is widely available in the majority of cardiac care facilities (Table 1). 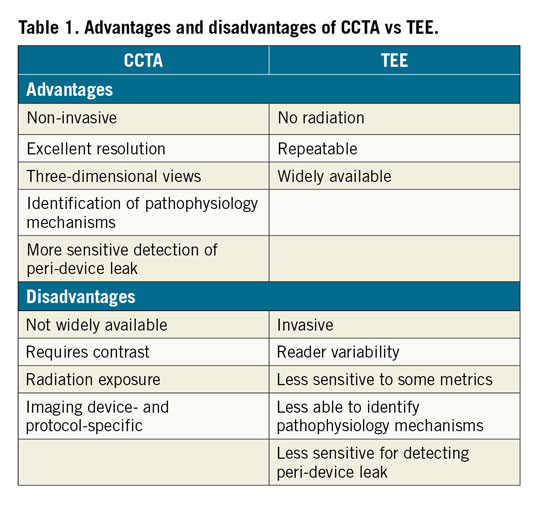 Not surprisingly, the findings in this current study were somewhat divergent. In this regard, it is important to remember that DRT was seen in only one patient (and was seen in that single patient by both imaging approaches). In addition, at a median duration of follow-up of 177 days (IQR 66-546), no patient had suffered any stroke or systemic embolism and there was only one death. There had been a single episode of transient ischaemic attack in a patient with no sign of cerebral infarction on imaging. Accordingly, the actual clinical significance of the findings in this article of both imaging approaches remains to be explored in larger patient series with longer follow-up.

That being said, there were differences in the findings. The authors found that CCTA was more sensitive in identifying residual contrast in the LAA (a.k.a. leak). In addition, CCTA allowed assessment of the mechanism of LAA patency including inadequate device compression with leak or “fabric leak”. It must be reiterated that small peri-device leak has not been associated with adverse clinical events in clinical series4. Accordingly, while both techniques can be used, at least in this current data set, the identification of any abnormality may or may not be associated with adverse events.

There are several important findings or pieces of information and guidance that the authors do not address which would have been of great and incremental value.

1. When should imaging be performed? The essential case for imaging in patients having received an LAAO device is in any patient in whom an adverse event occurs – stroke, transient ischaemic attack, or systemic embolism. Such imaging should be performed irrespective of the time duration since implantation.

2. What is the role of routine post-procedural imaging? It must be remembered that the role of post-procedural imaging was identified and then mandated in the randomised clinical trials of LAAO. In those randomised trials in which warfarin was prescribed for six weeks, imaging was routinely performed at the end of six weeks following LAAO and was typically mandated as part of the industry instructions for use. If there was no leak at that point in time, the antiplatelet/anticoagulant strategy was changed and warfarin (which was used at that time or now newer anticoagulants) was discontinued and only antiplatelet therapy continued after that. That evaluation was still valuable if the patient had an absolute contraindication to anticoagulation because, if a thrombus was found, or a large leak, then other strategies could be considered such as more prolonged dual antiplatelet therapy or placement of a plug to treat a large peri-device gap5.

3. Optimal frequency of imaging. Surveillance imaging has now shifted for evaluation of DRT. Studies have documented that DRT is most common early post procedure, within the first three to six months; however, there are anecdotal cases of patients in whom DRT has occurred later6. It has been felt that DRT was in part related to device incomplete endothelialisation. Given that that may occur by six months, surveillance imaging which identifies DRT after that may identify different mechanisms. Obviously, any patient who has an event with a known DRT should undergo imaging. However, in patients with DRT in whom there is no clinical event, should there be a series of follow-up imaging dates selected, for example at six months, at one year or two years? The authors might have given their strategy.

4. Are there risks associated with repeat imaging? Transoesophageal echocardiography, while invasive, is repeated relatively frequently in the clinical care of patients and has well-defined risks. On the other hand, CCTA is less often used sequentially. The authors remind us that there is a small amount of radiation with this procedure (5.1±3.9 mSv dose for the entire group, which is well below the accepted limit for radiation exposure); however, over the course of a lifetime it may have some potential implications. We must remember that a typical patient undergoing LAAO at the present time is 65-85 years of age in whom the incremental risk of isolated or even serial CCTA may not have marked clinical significance. Nonetheless, the issue of contrast nephropathy in patients who often have some degree of chronic kidney disease needs to be kept in mind.

The authors are to be commended for this important article. It raises multiple issues. Certainly, the images are superb with either technique and are complementary. Selection of the specific approach may depend upon the operator and centre experience with that technique. As more data become available, the relative risk-benefit ratio will be able to be mapped accordingly.

Frailty in patients undergoing TAVI: how can we measure it?