Conclusions: RIPC reduced the incidence of PMI following PCI, especially when performed in the lower limb and for patients with multivessel disease and complex lesions.

Reperfusion injury occurs at the time of restoration of blood flow following lethal ischaemia and leads to the generation of superoxide radicals. The free radicals promote oxidative stress, endothelial cell dysfunction and release of pro-inflammatory cytokines. Remote ischaemic preconditioning (RIPC) antagonises these deleterious effects through induction of intracellular kinase and subsequent modification of mitochondrial function within the cells, via opening of ATP-sensitive potassium channels and closure of mitochondrial permeability transition pores1-10. In animal models, intermittent, brief ischaemia in a remote organ has been shown to reduce myocardial infarct size when applied immediately before or during the onset of coronary ischaemia, as well as during reperfusion11.

Potential benefits of RIPC have also been tested in the setting of percutaneous coronary intervention (PCI). RIPC reduced troponin release for patients presenting with ST-segment elevation myocardial infarction15, while for patients with stable angina contrasting results are reported, from a reduction16 of periprocedural myocardial infarction (PMI) to a neutral effect17. Similarly, these trials also evaluated RIPC to reduce C-reactive protein (CRP)18,19, which has been shown to be related to the presence and severity of periprocedural myocardial infarctions, without homogenous results. Release of pro-inflammatory cytokines plays a pivotal role in ischaemia-reperfusion injury (IRI) cascade. Parenchymal damage and instability of subcritical plaques other than the target lesion are two potential consequences of the iatrogenic inflammatory stimulus during percutaneous coronary intervention. Large prospective studies have affirmed high-sensitivity CRP as being a relevant risk factor in the development of unstable atherosclerotic plaques. As outlined in recent European guidelines about cardiovascular disease prevention, specific therapeutic strategies targeting circulating CRP are still lacking. We would like to prove RIPC as a ground-breaking treatment to prevent IRI. CRP may thus represent a useful marker of the effectiveness of preconditioning techniques. Moreover, RIPC recently showed an impressive positive result for acute kidney injury20.

Thus a meta-analysis was performed to pool available evidence about the potential cardioprotective role of RIPC in reducing periprocedural myocardial infarction.

Pubmed (MEDLINE), Embase and Cochrane databases were searched using terms such as “ischaemic preconditioning or remote ischaemic (or ischaemic) preconditioning”, “percutaneous coronary intervention or PCI”, according to optimal search strategies21. Moreover, abstract sites for the ESC, TCT, AHA, and ACC were also searched for abstracts of unpublished studies.

The references quoted in the articles included were also reviewed, and no language restriction was performed. All corresponding authors of shortlisted studies were directly contacted for additional data and invited to participate in data analysis and interpretation, as well as suggestions for additional studies.

Randomised controlled trials which evaluated the effect of RIPC against a control population of patients undergoing PCI were selected. Inclusion criteria were: i) patients undergoing PCI, and ii) evaluation of PMI or reactive CRP levels as endpoint. Exclusion criteria were: i) animal studies, ii) non-randomised clinical studies.

The rate of PMI was the primary endpoint, while absolute values of CRP after PCI and rates of MACE (major adverse cardiac events) at follow-up were the secondary ones.

Using event rates as a dependent variable, a meta-regression was performed to test whether there was an interaction between baseline clinical features (age, female gender, diabetes mellitus and multivessel disease) and rates of periprocedural myocardial infarction.

Hypothesis testing for statistical homogeneity was set at the two-tailed 0.10 level and based on Cochran’s Q test, with I2 values of 25%, 50%, and 75% representing, respectively, mild, moderate, and extensive statistical heterogeneity. Funnel plots were explored to identify small study biases by the Duval and Tweedie trim and fill method. Statistical analyses were performed with Review Manager 4.2.4 (Windows; Microsoft, Redmond, WA, USA), and Comprehensive Meta-Analysis (CMA; Biostat, Inc., Englewood, NJ, USA).

A total of 294 citations were initially screened, and appraised using the abstracts; nine articles were selected, among which four were excluded, because of not evaluating clinical endpoints15,20,24,25 (Figure 1). Finally, five studies were included in our analysis16,17,26-28.

Figure 1. Profile of the review.

The protocol of RIPC was similar, with only one study using the lower limb24, and the definition of periprocedural myocardial infarction was consistent among studies, i.e., an increase of troponin greater than three times the 99th percentile URL (Table 2). 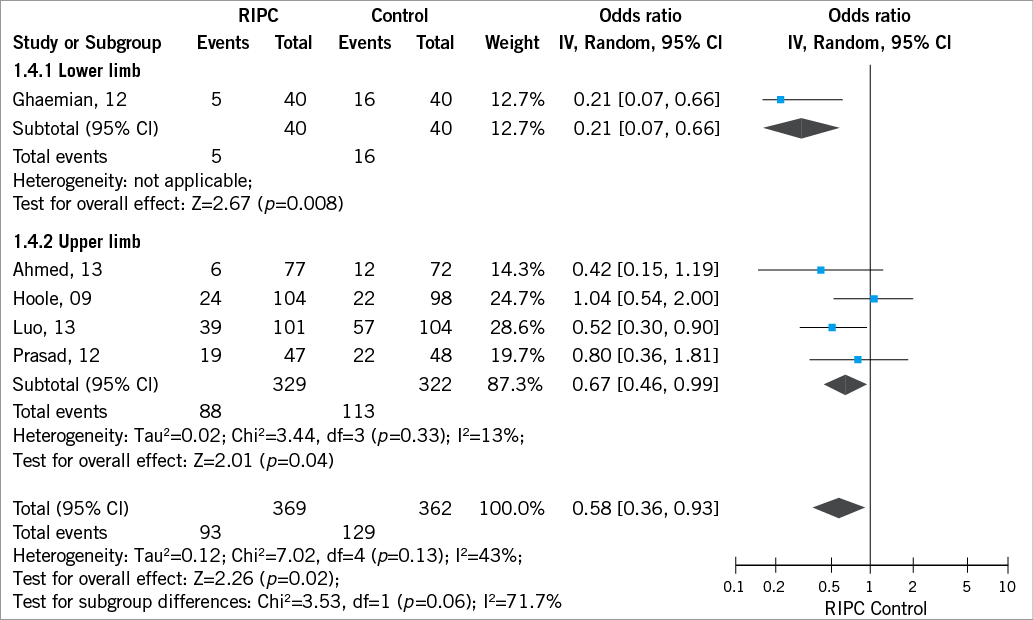 Figure 3. Pooled analysis of periprocedural myocardial infarction according to site or RIPC. 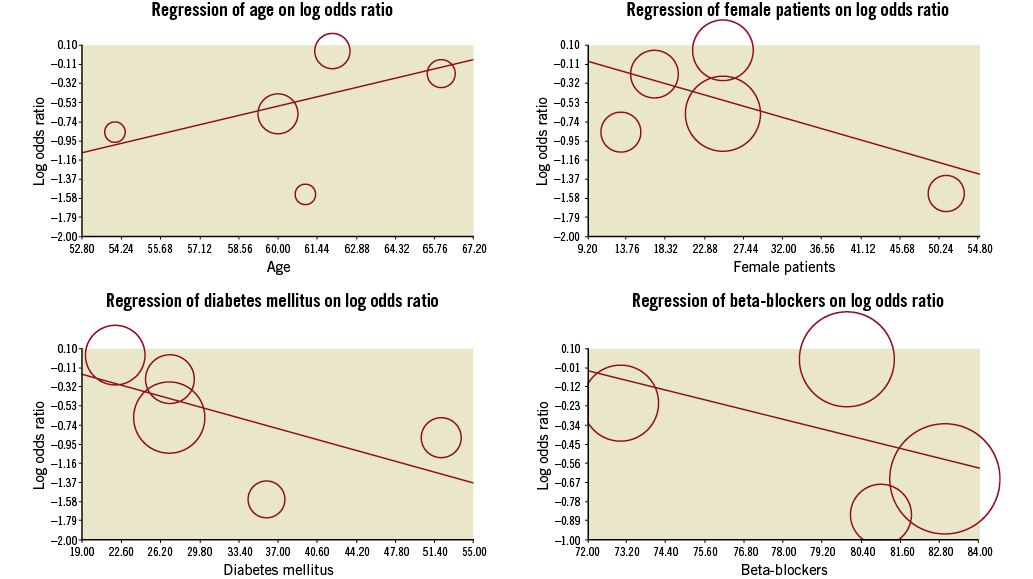 Figure 4. Meta-regression of clinical variables on reduction of periprocedural myocardial infarction (no significant interaction was noted). 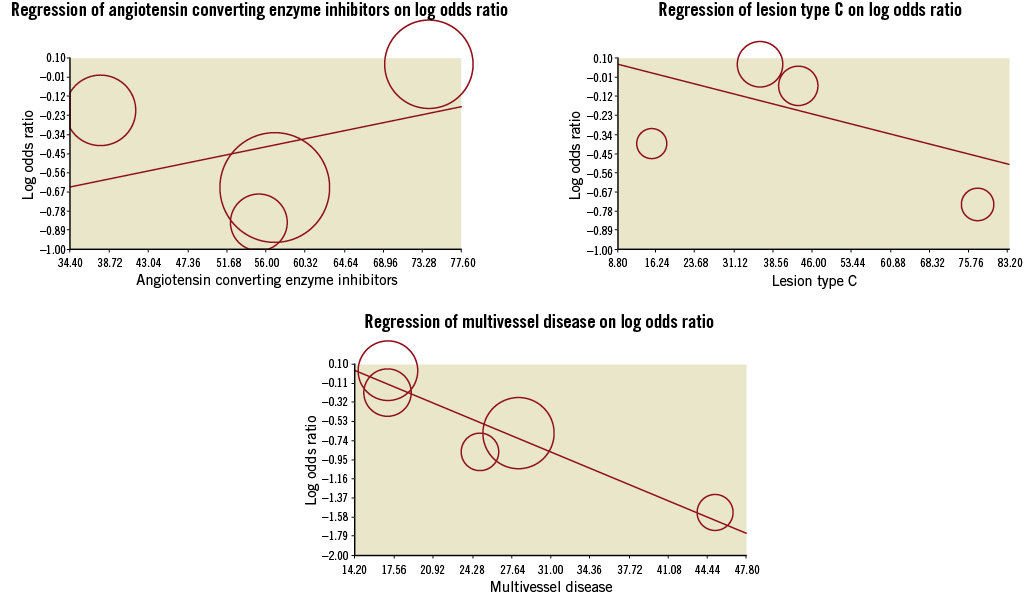 As shown in panel A of Figure 7, publication bias towards positive studies may be present, but Duval and Tweedie’s trim and fill showed significant reduction both for observed and adjusted methods. Moreover, risk of bias was small (Figure 7, panel B). 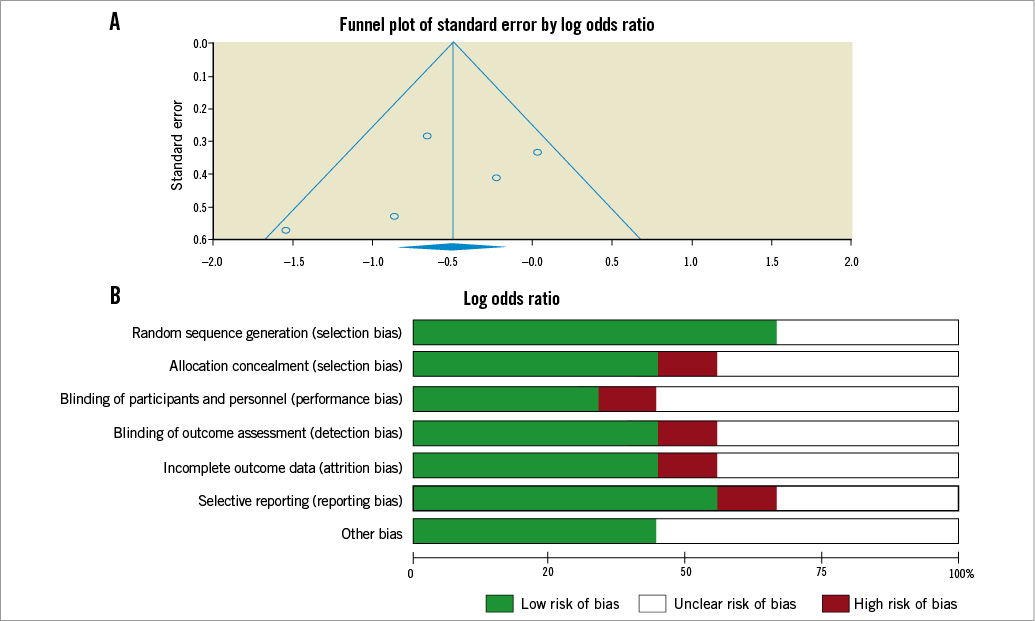 Figure 7. A) Funnel plot describing risk of publication bias. B) Risk of bias percentages of studies with low, unclear or high risk of selection, attrition, reporting and blinding bias are reported.

To the best of our knowledge this is the largest meta-analysis demonstrating, for the first time, a cardioprotective effect of RIPC during non-emergent PCI.

RIPC significantly reduced PMI with an estimated 10 patients needed to be treated to avoid one adverse event. Reduction of periprocedural myocardial infarction was increased for patients with multivessel disease. These observations are consistent with the benefit of RIPC we have recently reported in a meta-analysis of studies among patients with diffuse coronary disease undergoing surgical revascularisation12, highlighting the concept that positive effects of preconditioning may be more relevant and easier to detect in patients with a larger amount of cardiac damage. This may account for the fact that some investigations with a small sample size and in relatively low-risk patients16,17 (i.e., low frequency of diabetics and multivessel disease) did not demonstrate a benefit of RIPC on PMI. An interesting and hypothesis-generating observation from our analysis is that the benefits of RIPC may be enhanced when ischaemia and reperfusion therapy is performed in the lower limbs. This raises the question as to whether RIPC is an “all-or-nothing” or a dose-dependent phenomenon29. If the latter theory is true, the lower limb, with its signiﬁcantly larger bulk of skeletal muscle, may confer maximal cardiac protection.

An alternative to RIPC is direct cardiac preconditioning. Laskey29 demonstrated that direct ischaemic preconditioning performed in the coronary vascular bed prior to PTCA by two 90-second cycles of ischaemia induced by balloon inﬂations, separated by five minutes of reperfusion, signiﬁcantly reduced post-procedural creatine kinase elevation. However, direct preconditioning has the potential disadvantage of inducing complications such as macro- or microembolisation, ventricular arrhythmia or mechanical trauma to the vessel. In contrast, RIPC represents a safe, quick and cost-effective way to reduce PMIs, with a low number of patients needed to be treated to avoid one event30. This is comparable to a recent trial of statin use before PCI31, showing that 10 patients given atorvastatin were needed to reduce one event.

Although the cardioprotective mechanism of RIPC remains incompletely understood, preconditioning has been postulated to stabilise vulnerable plaques through platelet inhibition and antithrombotic effects32. Preclinical studies have shown that humoral mediators such as adenosine and bradykinin or neurogenic pathways probably play a crucial role in RIPC33. Also, endogenous myocardial mediators such as erythropoietin, nitric oxide, delta 1-opioid, and free radicals are involved9,34,35.

PMI can occur through a variety of mechanisms. A recent study using magnetic resonance imaging for delayed enhancement with gadolinium has shown that both impairment of flow in coronary side branches and distal embolisation of atheromatous material contribute to myocardial necrosis during PCI36,37. When substantial elevations of CK-MB of troponin are recorded, side branch occlusion though plaque shift is the most probable mechanism. On the contrary, smaller increases in cardiac enzymes are more likely due to microembolisation of thrombotic or atherosclerotic material. Moreover, some studies advocate that the presence of an enhanced inflammatory state could predispose patients to thrombosis as well as vasospasm, playing a role in the microembolism mechanism38,39. The lack of effect of RIPC on the CRP levels in our analysis suggests that modulation of inflammation may not be the predominant mechanism of action of preconditioning.

The majority of PMI, especially when measured with a sensitive biomarker such as troponin, probably represent a marker of atherosclerotic burden and procedural complexity. Nevertheless, large PMI are likely to affect prognosis, and strategies to limit them are worth pursuing38. The Joint ESC/ACCF/AHA/WHF Task Force Universal deﬁnition of Myocardial Infarction 200740 deﬁned PMI (type 4a) during PCI as an elevation of serum biomarkers (preferably cardiac troponins) above three times the 99th percentile upper reference limit (URL) after PCI, in patients with a normal baseline troponin value. Testa et al41 in a recent meta-analysis of 15 studies incorporating 7,578 patients demonstrated that these patients were at high risk of further adverse events both during the hospital stay and at 18 months. However, the accuracy of these results was limited by the use in the included studies of troponin cut-off values higher than the currently recommended 99th percentile. The incidence of PMI in selected studies of our review was about 15-20%, being higher in those studies with relevant rates of multivessel disease26,27, i.e., with larger atherosclerotic disease and more complex interventions. Recently, a revised universal definition of PMI has been proposed42, although the selected threshold of >5×99th percentile is, as acknowledged by the authors, arbitrary and without demonstrated correlation with prognosis43. The studies included in our study predated this definition and hence did not use it. Moreover, in our pooled analysis, RIPC did not influence prognosis. This finding should be confirmed in larger studies. Actually, the lower rates of adverse events after a PCI for stable angina require a larger sample size to drive a significant reduction; interestingly, the only positive trial was the one with the longest follow-up.

Our work has several limitations. First, a small number of studies were included which enrolled a small sample size due to the relatively recent interest in the clinical application of RIPC, which represented a limitation both for main analysis, and for meta-regression. Moreover, there is a lack of economic interest in this procedure. A second publication bias was noted towards positive effects, even if Duval and Tweedie’s trim and fill produced a negative result. In the included trials, overall quality was good, with a low risk of blinding and of selection bias.

The preliminary data for RIPC are very encouraging. However, confirmation in larger randomised multicentre studies that are adequately powered to assess major clinical endpoints is required. Unfortunately, the size of trials required to demonstrate benefits in hard clinical endpoints makes mortality trials unlikely, necessitating reliance on composite measures together with softer endpoints.

Tools and Techniques - Statistics: How many variables are allowed in the logistic and Cox regression models?