The introduction of drug-eluting stent (DES) dramatically changed the management of patients with coronary heart disease. Risk models for predicting adverse outcomes such as mortality and complications after percutaneous coronary interventions (PCI) have been published.1-9 However, all of the existing models derived from the datasets prior to approval of the first DES (the sirolimus-eluting stent, SES) in April 2003, and none of them was tested in the DES registries.1-9 Although it was reported that there was no difference in 30-day stent thrombosis rates between DES and bare-metal stent (BMS) as long as dual antiplatelet therapy was continued, there are still concerns about short-term complications related to DES.10 Therefore, at least the discriminatory values of the existing risk models should be tested in DES cohorts.

All of the existing models used in-hospital events as their study outcomes, and none evaluated 30-day outcomes. However, many complications can manifest after hospital discharge. Therefore, with contemporary hospitalisation discharge patterns requiring only one or two days of hospitalisation after procedures, in-hospital outcomes may underestimate actual short-term post-procedure complications.

The STENT (Strategic Transcatheter Evaluation of New Therapies) study is the first and largest multicentre prospective registry to collect short and long-term clinical outcomes with SES and paclitaxel-eluting stents (PES) from a “real-world” patient population in the United States.11 It provides a unique opportunity to identify a group of variables which predicts clinical adverse outcomes after PCI with DES. Thus, we sought to utilise the STENT registry to develop an integer-based risk score predicting 30-day major adverse cardiac or cerebrovascular events (MACCE) after PCI with DES.

The details of patient enrolment and the data collection process were previously described elsewhere.11 Briefly, the STENT study is a multicentre multi-device PCI registry that began enrolment in May 2003. Centres were selected to represent a mix of large tertiary referral- and smaller community-based interventional cardiology programs. All eight centres obtained institutional review board (IRB) approval to prospectively consent and enrol patients. For patients having more than one procedure during the study period, the first procedure was used for 30-day follow-up. Patients having lesions treated only with SES or PES were included.

All univariate testing for categorical variables was done with the Chi-square test for association, or the Fisher’s exact test when expected cell counts were less than five observations. Continuous variables were evaluated with the Student’s t-test after confirming a normal distribution. All p-values were two-tailed.

Logistic regression was used to model the incidence of MACCE and generate parameter estimates. Characteristics significant (p <0.1) in univariate analysis and/or clinically relevant were used into a stepwise regression model. Any fields missing more than 5% of the data were excluded. Forward and backward stepwise regressions were done using p<0.1 as the initial cut off to enter or exit the model, and p<0.05 to remain in the final model. These models were used to determine a set of variables which has the best likelihood ratios for predicting post-procedure complications. These analyses were done in the study-set of patients. An integer-based risk score system was developed based on the final logistic regression model using the method described by Sullivan, et al.12 Briefly, the risk factors identified through the multivariable logistic regression modelling were assigned an integer coefficient. Integers were chosen to be approximately proportional to the estimated continuous coefficients from the logistic model. Within the study-set, discriminatory ability of the final logistic regression model was determined. The integer-based risk score was calculated for each patient, and the c-statistic was determined for each sample.

We utilised the validation-set (the remaining 22.5% of the all study patients) to validate the logistic regression model and the risk score algorithm. Model discrimination was assessed by c-statistic, and calibration was tested with the Hosmer-Lemeshow statistic. The association between total risk score categories (tertile and quintile) and observed event rates was also assessed with the use of the Cochran-Armitage test for trend. All analyses were performed using SAS® version 9.1 (SAS Institute, Inc., Cary, NC, USA).

The incidence of major adverse outcomes in both the study and validation-sets are shown in Table 1. 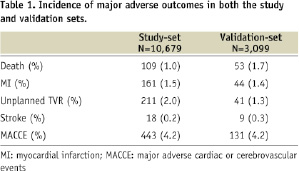 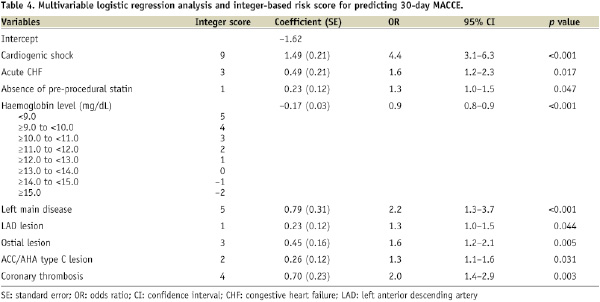 The variables were cardiogenic shock, acute CHF, haemoglobin level, absence of pre-procedural statin use, left main disease, LAD lesion, ostial lesion, coronary thrombosis and ACC/AHA type C lesion. The C-statistic and the Hosmer-Lemeshow p-value of the final model in the study-set were 0.653 and 0.448, respectively.

Creation of an integer-based risk score

An integer-based risk score was created based on the model coefficients in Table 4. Estimates of 30-day MACCE risk corresponding to different total scores are shown in Figure 1.

The range of possible MACCE risk scores is from –2 to 32 and the estimated risk goes up to 85%. The C-statistic of the integer-based risk score in the study-set was 0.646. Predicted and observed 30-day MACCE by total risk score categories (tertile and quintile) are shown in Figures 2A and 3A, respectively. 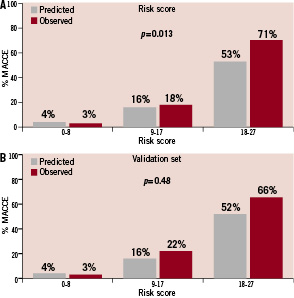 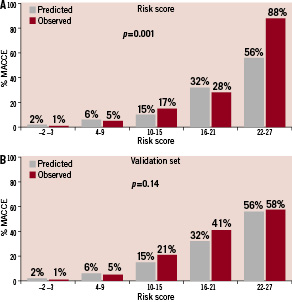 The predicted and observed event rates appear to be similar, except perhaps in the upper range of the distribution in the study set. The Cochran-Armitage test for trend was significant when total risk scores were broken down by quintile (p=0.001) and by tertile (p=0.013).

Validation of the integer-based risk score

In the validation-set, there was 1.7% death (N=53), 1.4% MI (N=44), 1.3% TVR (N=41), 0.3% cerebrovascular accident (N=9), 4.2% MACCE (N=131) within 30 days after PCI with DES. The final multivariable logistic model had a C-statistic of 0.704 and a Hosmer-Lemeshow p-value of 0.64. The C-statistic of the integer-based risk score in the validation-set was 0.692. Predicted and observed 30-day MACCE by total risk score categories (tertile and quintile) are shown in Figures 2B and 3B, respectively. The Cochran-Armitage test for trend was not significant when total risk scores were broken down by either tertile (p=0.48) or quintile (p=0.14). Additionally, the integer-based risk score was tested for the prediction of in-hospital MACCE in the validation-set. For predicting in-hospital MACCE, the C-statistic of the model was 0.799.

In the present study, a risk score system for predicting 30-day MACCE was developed based on the data of 10,679 patients in the STENT registry. The system was then validated using the data collected from other 3,099 patients in the STENT registry. Compared to the previously reported risk scores, the present risk score system is unique because of the following reasons.1-9 First, this risk score system was derived from and validated in the dataset exclusive to DES. It should be emphasised that most of patients (N=13,378, 97.1%) received thienopyridine at least after the procedures in the STENT Group registry. Our risk score may not be applicable if patients are not given post-procedure thienopyridine. Second, this risk score system predicts 30-day post-procedural complications. All previous documented risk scores predicted mortality or major complications in the index hospitalisations.1-9 However, the present study demonstrated that short-term complications were underestimated by using these in-hospital outcomes. It may not be fair to inform patients undergoing procedures of estimated in-hospital outcomes alone as risk of short-term complications. Many short-term post-procedural complications can manifest out of the hospital because of the contemporary hospitalisation pattern: most of patients who underwent PCI were discharged home in one to two days after the procedures.

Of the nine variables in our risk score, cardiogenic shock, acute CHF, left main disease, LAD lesion, ostial lesion, ACC/AHA type C lesion and coronary thrombosis were risk factors of high-risk procedures consistently identified in previous studies.1-9 In contrast, pre-procedural statin and haemoglobin level were not in the previously reported risk score systems. The benefits of HMG-CoA reductase inhibitor (statin) are well established in primary and secondary prevention for coronary artery disease.13-17 Moreover, the benefits of statin therapy seem to extend to the patients experiencing acute coronary syndrome.18 A few studies have suggested that statin therapy prior to PCI was associated with reductions of myonecrosis and mortality after PCI.19-22 In our study, absence of pre-procedural statin was an independent predictor of 30-day MACE even when adjusted with absence of post-procedural stain and the other eight variables in the final risk model. However, it remains to be proven by future clinical trials whether statin use before PCI improves post-procedure outcomes.

Anaemia has been reported to be associated with increased mortality in patients who undergo PCI.23-25 Although presence of anaemia prior to procedures was associated with post-procedure major bleeding complications, the mechanisms associated with increased mortality among patients with pre-procedural anaemia have not been fully defined.23 It is reasonable to think that transfusing anaemic patients who undergo PCI will improve post-procedure outcomes. However, the previous studies have shown the paradoxical relationship between post-procedure blood transfusion and higher short-term mortality (in-hospital, 30-day) among patients who underwent PCI.25-27 Some potential reasons for the paradox between blood transfusion and short-term higher mortality have been proposed, such as depletion of nitric oxide (NO) and increasing inflammatory mediators in the stored red blood cells.28,29 To the best of our knowledge, there is no reported data whether correcting haemoglobin level before PCI in patients with baseline anaemia improve outcomes.

C-statistics of our model were modest; 0.653 and 0.692 in the study- and validation-sets, respectively. This may be the most significant limitation of our study. Previously Mayo Clinic Risk Score was reported to predict in-hospital MACCE with good c-statistics; 0.782 and 0.755 in the study- and validation-sets, respectively. In contrast, c-statistics of SCAI risk score predicting in-hospital major adverse cardiac events (MACE; a composite of death, non-fatal MI and emergent CABG) were reported lower; 0.71 and 0.65 in the study- and validation-sets, respectively. It may be reasonable to assume that the prediction of 30-day events is more difficult than the prediction of in-hospital events because more factors are likely related to far future events. This was confirmed by our own validation of in-hospital MACCE with the 30-day MACCE algorithm. The model actually was a better predictor for in-hospital MACCE, suggesting that the in-hospital endpoint is more easily predicted due to the close proximity to the intervention.

In Table 2, p-values comparing mean age, prevalence of diabetes, hypertension, hypercholesterolaemia and acute CHF between the study- and validation-sets were significant (<0.05). 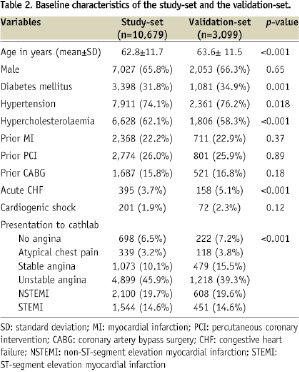 However, these significant p-values are likely the type I error which is incorrectly rejecting the null hypothesis due to very large sample size. We do not see any reasons why the patient characteristics were different between the two time periods. Indeed, the effect sizes between the two groups were very small.

The previously reported demographic risk factors such as higher age, female gender and prior history of CABG were not predictors of post-procedure complications in the present study.1-9 Age was analysed as categorical and continuous variables, however it was consistently non-significant through the entire study including univariate and multivariable analyses. We are unable to explain these findings against the previously published data. We might have been conservative for procedure indications in patients with these traditional demographic risk factors, therefore potential selection bias cannot be excluded in the study.

The potential risk of PCI has to be assessed and weighted against the potential benefit before the procedure with informed patients and their families. The present study provides updated evidence and a useful risk score system which would help clinicians estimate short-term procedural risk.