Aims: We aimed to perform a meta-analysis on transaortic (TAo) transcatheter aortic valve implantation (TAVI) in order to gain more insight into the safety and efficacy of the approach in addition to the data available from selected centres with small numbers of patients.

Conclusions: In this meta-analysis of observational studies, transaortic TAVI appears to be a safe procedure with low complication rates.

Transcatheter aortic valve implantation (TAVI) for the treatment of symptomatic severe aortic stenosis is now a well-established treatment in a selected group of patients1. A transfemoral (TF) first approach is used in most centres. However, if the iliac and femoral arteries are not suitable or too small to accommodate sheaths for valve deployment, an alternative route is advisable. The transapical (TA) route is often used when TF-TAVI is not feasible, but is not preferred in patients with left ventricular dysfunction or with significant frailty. Experience with several additional alternative routes has been published, including the subclavian, transcarotid, and transaortic (TAo) approaches.

A number of centres have reported their practice of TAo-TAVI and have suggested that it offers a safe and efficient alternative access route2. As a result, it is becoming a more popular approach. However, data, and therefore the strength of the current evidence, are mostly from single-centre experiences with small numbers of patients. Therefore, we performed a meta-analysis in order to gain more insight into the short-term safety and efficacy results of the TAo-TAVI approach.

A systematic review of the published data was conducted in accordance with the guidance and the reporting items specified in the Meta-analysis Of Observational Studies in Epidemiology (MOOSE) guidelines3.

Two investigators (H. Amrane and S.J. Head) independently screened the yielded articles, using the following criteria: (i) the publication was an original full-length English article in a peer-reviewed journal; (ii) results were reported for a specific group of patients that underwent TAo-TAVI; (iii) the group of patients that underwent TAo-TAVI consisted of ≥5 patients; and (iv) at least the endpoint of 30-day mortality was reported.

During initial screening, the titles and abstracts were reviewed. A second in-depth screening of the full-text articles was performed. In a third screening, the study location and patient inclusion periods were compared to assess whether studies reported results from the same patient population. Conflicts between investigators were resolved by discussion. Reference lists from included studies were checked to ensure that no potentially relevant studies were missed.

Random-effects models using the DerSimonian and Laird method were constructed to estimate the pooled complication rates with 95% confidence intervals (CI), as is advised for observational studies5. For studies that reported zero events, 0.1 events were used to calculate an estimated event rate with 95% CIs. Heterogeneity across studies was explored using the Cochran Q and I2 statistics, where low values correspond to little heterogeneity. Sensitivity analyses were performed only with studies that reported results according to VARC-2 definitions, providing a pooled estimate for VARC-2 endpoints with the transaortic technique. Planned subgroup analyses were performed according to hemisternotomy versus thoracotomy and different THV devices, by calculating pooled complication rates in each subgroup and generating a p-value for interaction. Only a single study reported results of a thoracotomy approach separately, which was considered too few for a comparison with the hemisternotomy approach. Only one study reported results of the Direct Flow Medical® device (Direct Flow Medical Inc., Santa Rosa, CA, USA), which could therefore not be compared to the SAPIEN (Edwards Lifesciences, Irvine, CA, USA) and CoreValve® (Medtronic, Minneapolis, MN, USA) devices, and was excluded from the subgroup analysis.

The search yielded 251 potentially relevant studies. After screening of the abstracts and applying exclusion criteria, 16 studies were included in the meta-analysis (Figure 1)6-21. Results of 1,907 patients were reported. All studies were observational, and all but three were single-centre experiences. 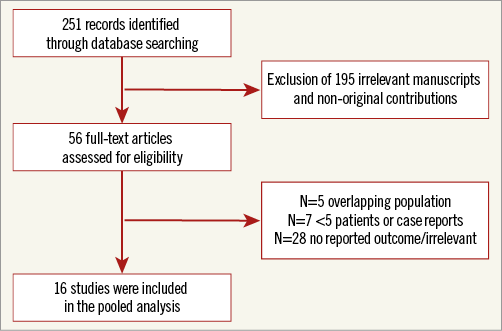 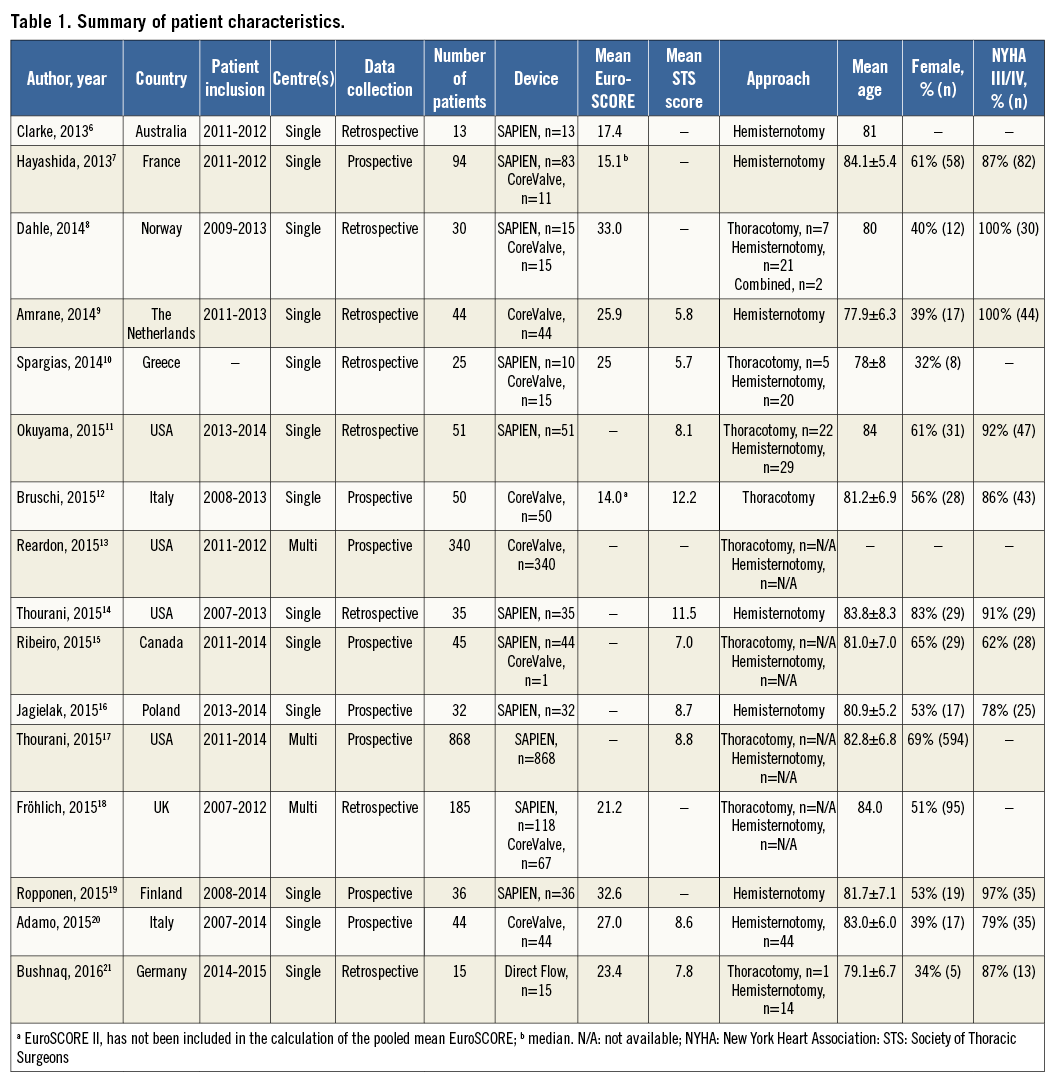 Definitions were reported according to VARC-2 criteria in 13 of the 16 studies (Table 2). 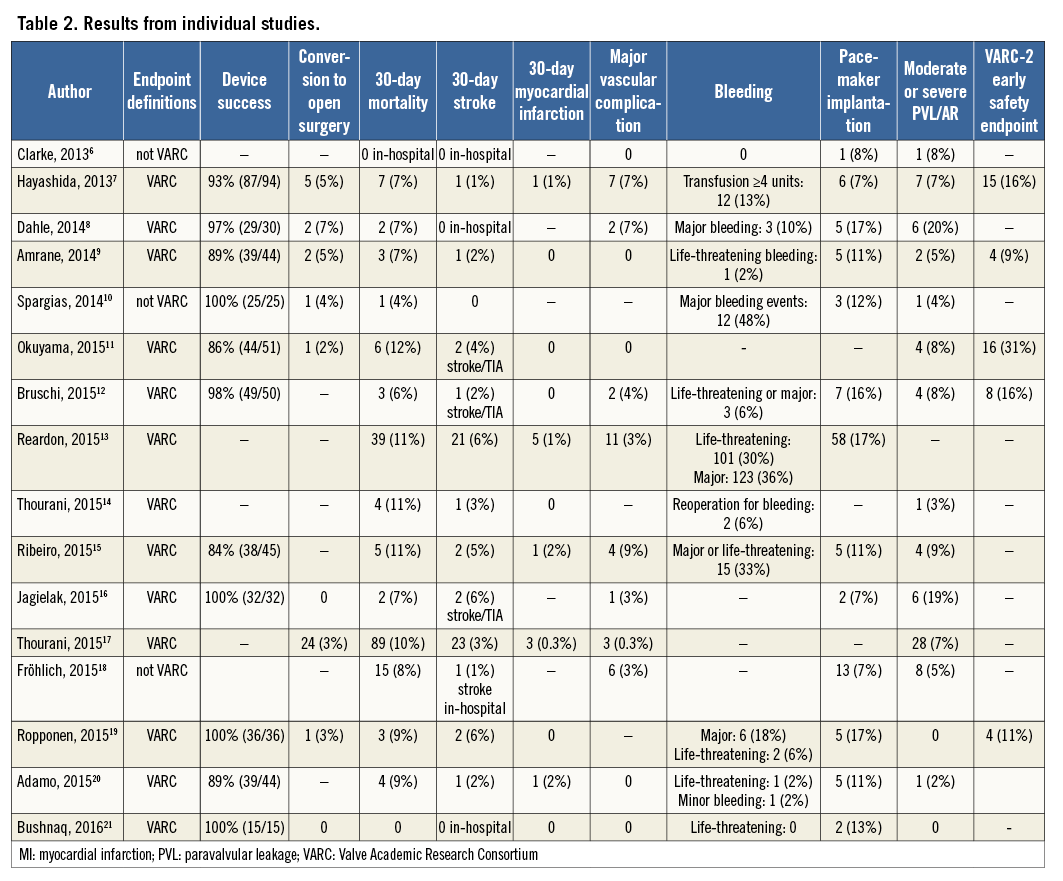 In this meta-analysis of 16 studies comprising 1,907 patients, TAo-TAVI appears to be a safe procedure with low procedural complication rates. Moreover, there were no differences in terms of hard clinical outcomes when comparing the use of a SAPIEN or CoreValve device, although the SAPIEN device appeared to have a higher rate of PVL/AR while the CoreValve device required more permanent pacemaker implantations. The majority of TAo-TAVI procedures were performed employing a hemisternotomy approach; however, it remains unclear whether this access is superior to a thoracotomy. The fact that most publications on results of TAo-TAVI also reflect learning curves has to be taken into account when evaluating these results.

According to the risk profile of patients included in individual studies, patients were considered to be at either high or intermediate risk. However, considering that TAVI is generally recommended for high-risk patients only, it can be expected that all patients were deemed high risk for surgery. Risk models provide no information on the reason for patients to be considered high-risk outside the standard risk factors included in the EuroSCORE and STS score, the most important factor probably being frailty. The absence of a uniformly used and validated frailty index stresses the key role the Heart Team plays in the preoperative evaluation of these patients. All studies mentioned the fact that patient assessment was carried out by the Heart Team or a multidisciplinary team consisting of at least one cardiologist and a cardiac surgeon, underlining the importance of the Heart Team.

The device success, as defined in VARC-2, was reported in 11 studies, with the highest rate being 100%. This endpoint evaluates the procedural mortality, the correct positioning of a single prosthetic heart valve and meeting the intended performances of the valve itself without more than moderate regurgitation. The latter can be largely influenced by the amount and distribution of the calcifications in the “landing zone”, bicuspid native aortic valve and by post-dilatation procedures, as extensively shown in previous publications22, but these data are not available for all the included individual studies.

The rate of permanent pacemaker implantation is reported in the literature to be as high as 28% after TAVI, with a higher incidence in CoreValve series compared to SAPIEN valves23. In our pooled analysis, pacemaker implantation after the procedure occurred at an estimated rate of 11.7%, with a significantly higher rate when using a CoreValve versus a SAPIEN device. One of the most important predictors of new conduction disturbances is the depth of implantation: the relatively favourable rate of permanent pacemaker implantation obtained with TAo-TAVI found in the current study may rely on the precise positioning due to the short distance to the aortic valve and annulus which permits a higher implant of the prosthesis.

Moderate/severe PVL and AR were present at a pooled rate of 6.7% (95% CI: 4.3-10.1%). Data from a PARTNER-I substudy on two large cohorts of patients showed the same rates for TA-TAVI and higher rates for TF-TAVI at discharge (8.9% and 12%, respectively, p=0.001)24. Unlike studies that showed that regurgitation appears higher with a CoreValve vs. a SAPIEN device25, we found a (non-statistically significant) higher rate with the use of SAPIEN devices. We can only speculate that the short working distance and immediate tactile feedback achieved with TAo-TAVI made it possible for the operators to use the full potential of the CoreValve with an increased precision of positioning, thereby possibly reducing the incidence and severity of paravalvular regurgitation in comparison to other published series26. Rates of PVL with a SAPIEN device have recently been shown to be significantly lower with the use of the SAPIEN 3 valve, but these devices were not used in the studies included in this meta-analysis. Our pooled analysis of PVL should be interpreted with caution, as measurement of PVL remains challenging and proposed definitions have been difficult to incorporate in current guidelines.

Mortality in this analysis varied between 0 and 12%. In total, 183 patients died within the first 30 days after their intervention, which represents a pooled 9.9%. The mean EuroSCORE and STS score was 8.4 and 23.5%, respectively, although not all papers reported on one or both scoring systems. Causes of death were not always described, but about half the patients died periprocedurally due to annular rupture, left or right ventricle laceration, coronary occlusion, aortic dissection or bleeding from the pulmonary artery. Post-intervention causes of death varied and consisted mostly of cardiac and/or respiratory failure or stroke.

The incidence of stroke ranged between 0 and 6% in the pooled studies, with an estimated pooled rate of 3.7%. These results are a composite of disabling (major) and non-disabling (minor) strokes, as per VARC-2 criteria, and are comparable to the 3.3% major stroke rate reported in the large meta-analysis on stroke after TAVI by Eggebrecht et al27. More recent results from the ongoing PARTNER-II trial, comparing SAPIEN to SAPIEN XT for inoperable patients, reported a stroke rate of 4.3% for the TA arm. The results of TAo-TAVI are in line with results achieved with other techniques, thus confirming that TAo-TAVI appears not to increase the risk of stroke. In fact, avoiding manipulation of the aortic arch and supra-aortic vessels may offer a theoretical advantage over other retrograde TAVI accesses. Conversely, the aortic puncture required for TAo-TAVI may increase the risk of emboli and, therefore, stroke. Insights from studies that employ procedural transcranial Doppler may identify the timing of these emboli and compare different approaches, although the default use of cerebral protection devices may be warranted in any type of aortic valve procedure.

Myocardial infarction has been pooled at 1.0%. We have to take into account that this particular patient subset includes vascular patients often with generalised atherosclerosis also involving the coronaries. Pre-procedure coronary angioplasty is in some cases necessary but can be a confounding factor in detecting infarction because an elevation of the cardiac markers following percutaneous interventions can be due to the coronary angioplasty itself.

Despite these encouraging results, the TAo approach also has several potential contraindications: i) the presence of a true porcelain aorta; ii) a short ascending aorta that does not permit a minimum of 6 cm distance from the cannulation site to the aortic valve annulus; iii) possible graft injury in a redo setting; and iv) severe COPD making mechanical ventilation undesirable. Patients with these risk factors and absence of femoral access may remain candidates for a TA approach, although it has also been considered that TAVI may be futile in patients with many technical risk factors.

As with any meta-analysis, the analyses rely on the studies that are reported in the literature. This is a meta-analysis of mostly small single-centre observational studies as there are currently no randomised trials comparing access routes of TAVI. The procedural and technical aspects of current TAVI practice are variable and each centre may have different treatment protocols, which could explain some of the heterogeneity observed in the analysis, although heterogeneity was overall considered moderate at most. Moreover, this can also be considered one of the strengths of this meta-analysis, demonstrating the real-world practice of TAo-TAVI.

Only a limited number of studies were performed using a thoracotomy approach, and therefore we were unable to perform subgroup analyses according to incision. Furthermore, not all studies reported outcomes according to VARC-2 and many studies only reported outcomes selectively. Therefore, event rates for a number of important endpoints could not be pooled. Moreover, considering the fact that almost all studies are retrospective in design and are single-centre reports, results and conclusions, particularly of the subgroup analyses, should be interpreted with some caution. Small studies with fewer than five patients were excluded to limit the impact of the learning curve and provide more substantiated outcomes.

In this meta-analysis that was largely based on small single-centre experiences, transaortic TAVI appears to be a safe procedure. However, further data from larger multicentre studies are required to evaluate the optimal approach in terms of comparing TAo with other access routes, as well as a hemisternotomy versus thoracotomy approach.