Conclusions: The use of Absorb BVS in patients meeting the ABSORB II trial inclusion criteria or those with low SYNTAX scores is associated with acceptable clinical outcomes at two-year follow-up. Patients with more complex characteristics have significantly higher revascularisation rates.

The Absorb bioresorbable vascular scaffold (BVS) (Abbott Vascular, Santa Clara, CA, USA) has been intensively investigated and was the first bioresorbable scaffold (BRS) to receive a Conformité Européenne (CE) mark. The ABSORB trials have shown the safety and feasibility of the scaffold, with a low rate of major adverse cardiovascular events (MACE) up to five years after implantation1-3. The ABSORB III trial, the largest randomised controlled trial powered on clinical endpoints, has shown non-inferiority on the primary endpoint of target lesion failure4. These trials were performed in selected patients and with exclusion of more complex patient categories such as acute coronary syndrome (ACS) patients, coronary artery bifurcation lesions or heavily calcified lesions.

Recent studies in patient populations more comparable with daily clinical practice, including patients with ACS, have shown acceptable rates of MACE at up to one-year follow-up5-8. The clinical event rates of the BVS were comparable with everolimus-eluting metallic stents and bare metal stents at 30-day and one-year follow-up in the setting of ST-segment elevation myocardial infarction (STEMI)9. However, some reports have raised concerns about a non-negligible incidence of scaffold thrombosis (ST) of up to 3% at six-month follow-up10-13. Furthermore, long-term follow-up data on the BVS are restricted to the highly controlled ABSORB A and B trial and there are limited data beyond one-year follow-up available on its use in lesions reflecting the complexity of daily clinical practice.

The design, baseline and procedural characteristics, quantitative coronary angiography (QCA) analysis and the six-month clinical outcomes of the Amsterdam ABSORB registry are described in detail elsewhere11. Briefly, this registry evaluated the clinical outcomes of all patients who underwent percutaneous coronary intervention (PCI) with Absorb BVS implantation between August 2012 and August 2013. Implantation was part of routine clinical practice at the Amsterdam Medical Center (AMC), University of Amsterdam, The Netherlands. The AMC is a high-volume, tertiary PCI centre, with a PCI volume of approximately 1,400 stent implantations per year.

Baseline demographic characteristics were collected prospectively. Clinical follow-up was obtained by telephone contact. The necessity to obtain written informed consent was waived by the institutional review committee. When patients reported potential clinical events, patients’ medical records, discharge summaries and, if applicable, repeat angiograms and PCI procedures were reviewed. If patients could not be contacted, follow-up information regarding vital status was obtained from the Municipal Personal Records Database (BRP, formerly the GBA database). All reported events were verified and adjudicated by an independent adjudication committee according to criteria defined below.

All baseline anonymised diagnostic angiograms were analysed independently by two of the investigators (R.P. Kraak and M.J. Grundeken). Each coronary lesion resulting in ≥50% diameter stenosis in vessels ≥1.5 mm was calculated using the online SYNTAX score (SXscore) calculator 2.11. The mean SXscore of the two observers was used for the final analysis, except when there was a difference in SXscore of >5 points. In these cases, the baseline angiograms were reassessed and a consensus between the two investigators on the final SXscore was obtained and used for the final analysis.

Continuous data were expressed as mean±standard deviation (SD) or as median quartiles, and dichotomous data were summarised as frequencies. Stratified analysis was performed according to the median of the SXscore and the ABSORB II trial inclusion and exclusion criteria. Survival analyses were performed using the Kaplan-Meier method. Follow-up was censored at two years or at the last known date of follow-up, whichever came first. A p-value <0.05 was considered statistically significant and statistics were performed using the Statistical Package for Social Sciences software (SPSS), Version 20.0 (IBM Corp., Armonk, NY, USA).

Baseline patient and angiographic characteristics are shown in Table 1. A total of 135 patients (59±11 years, 73% male, 20% diabetic) were enrolled and 159 lesions were treated. 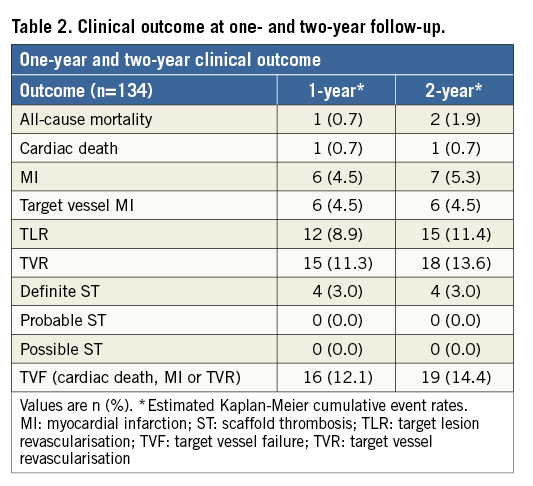 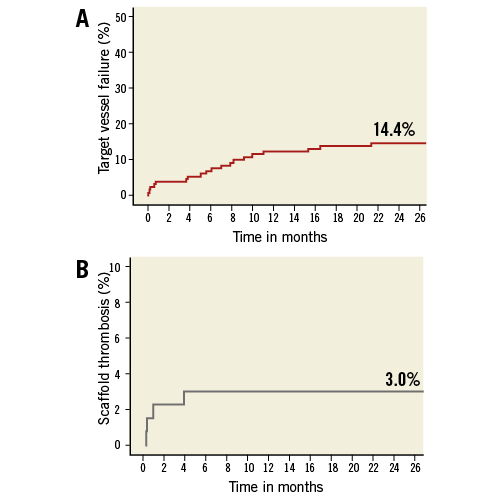 Figure 1. Kaplan-Meier (KM) survival curves for target vessel failure and ST. A) KM curve of the combined endpoint of target vessel failure (TVF) at two-year follow-up, with a two-year cumulative event rate of 14.4% in the overall study population. B) KM curve of definite scaffold thrombosis, with a two-year cumulative event rate of 3.0%. There were no cases of late or very late scaffold thrombosis observed beyond six-month follow-up.

The SXscore was collected in 129 of the 135 patients. Reasons for the SXscore being missing were a history of prior coronary artery bypass grafting (CABG) (n=3) or unavailability of the baseline angiograms (n=3). The SYNTAX score ranged from 1 to 50, with a median of 11.5 (Q1-Q3: 6-17.5). In the stratified analysis, the patients were divided according to the median SXscore: <11.5 (SXlow, n=64) and ≥11.5 (SXhigh, n=65). The baseline and lesion characteristics according to the SXscore are summarised in Table 4. 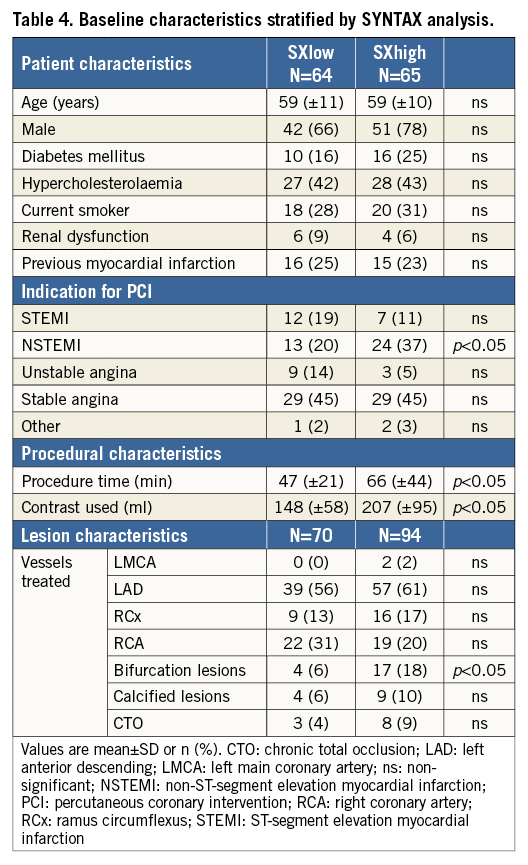 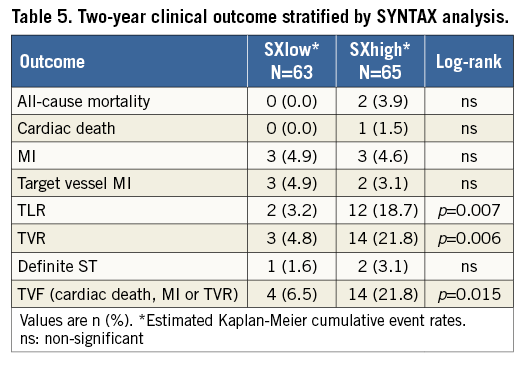 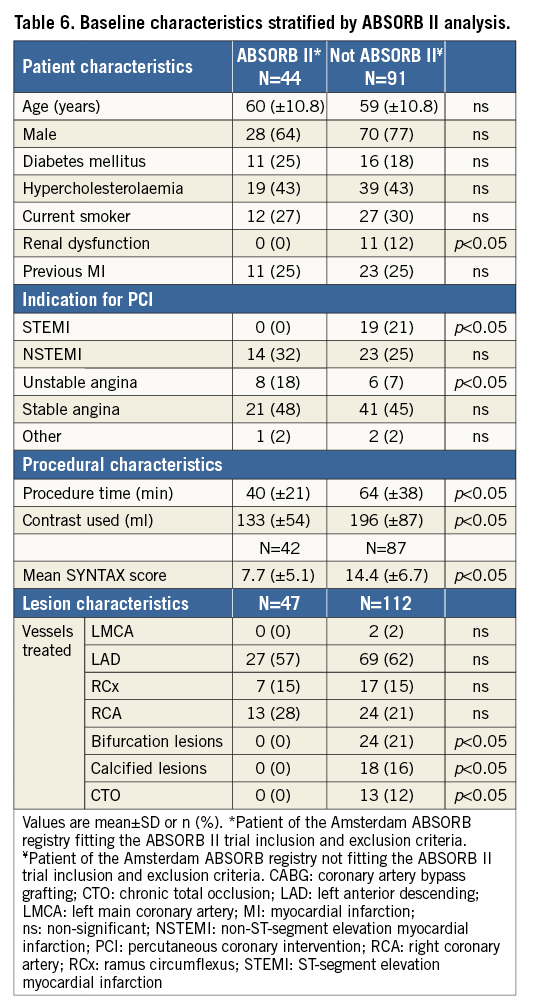 The main findings of this study were the following.

1. Implantation of the Absorb BVS in a patient population reflecting daily clinical practice was associated with acceptable two-year clinical outcomes.

2. ST was not observed after six months in our registry.

3. The two-year clinical outcomes in patients meeting ABSORB II trial inclusion criteria or those with low SYNTAX scores were acceptable.

4. BVS implantation in more complex patients seems to be associated with a significantly higher revascularisation rate.

Our study provides the first longer-term clinical follow-up data on the use of the Absorb BVS in a patient population reflecting daily clinical practice, including ACS patients (of whom 14% presented with STEMI), bifurcation lesions and lesions classified as AHA/ACC lesion classification type B2/C (67%). We have demonstrated that implantation of the Absorb BVS is safe (cardiac death rate 0.7% at two years). The revascularisation rates (TLR 11.3%, TVR 13.6%) were also acceptable. Although the ST rate (3.0%) was quite high in our previous report presenting the six-month follow-up11, we did not observe any additional late or very late ST cases beyond the initial six months.

The observed revascularisation and ST rates are comparable with the clinical outcome of first-generation drug-eluting stents (DES). The LEADERS trial demonstrated a 2.5% two-year definite ST rate in the CYPHER treatment arm, and the COMPARE trial showed a 2.9% two-year definite ST rate in the TAXUS treatment arm16,17. Similarly, the SORT-OUT II trial observed 1.6% and 2.2% probable and definite ST rates at 18-month FU, respectively, in the TAXUS and the CYPHER stent arms18. This is in contrast to the currently used second- and third-generation DES, which have lower ST rates both at one- and two-year follow-up (ST rates between 0.2% and 1.0%)19-22.

Randomised controlled trials comparing the Absorb BVS with the XIENCE DES have demonstrated the same trend towards an increased ST rate in Absorb. At two-year follow-up, the ABSORB II trial demonstrated a numerically higher, though statistically non-significant, ST rate of 1.5% in the Absorb BVS group compared with 0% in the XIENCE DES group. Moreover, despite non-inferiority on the primary endpoint, the ABSORB III trial demonstrated a non-significantly higher definite and probable ST rate in Absorb BVS compared to XIENCE (1.5% vs. 0.7%)4. This increased incidence is worrisome, and could be related to the thick 150 µm BVS struts. Thicker stent struts, especially when malapposed, are associated with increased blood flow alterations and thrombogenicity23,24. Furthermore, animal studies have demonstrated an increased platelet aggregation and inflammatory cell adhesion, while the endothelial recovery was reduced in the Absorb BVS juxtaposed with thin-strut third-generation metallic DES25. Therefore, a reduction in the strut thickness of bioresorbable scaffolds could lead to a reduced ST risk. However, while reducing strut thickness, radial strength must be preserved.

Despite the relatively small sample size and the potential selection bias in treatment of patients with the Absorb BVS in our cohort, the SXscore analysis in the current study demonstrated that our patient population resembles daily clinical practice. With a median SXscore of 11.5, our cohort’s SXscore distribution is comparable to that observed in the LEADERS all-comers trial26. Moreover, our results indicate that the SXscore may also be an appropriate tool to stratify risk in patients treated with BRS, as it has been used in patients treated with DES27. Our stratified SXscore analysis confirms that the use of the Absorb BVS in patients with relatively simple coronary artery disease, as demonstrated in the ABSORB trials, is feasible, safe and associated with acceptable clinical outcomes at two-year follow-up. The observed event rates in the lowest SXscore group appear to be similar to the event rates observed in the second- and third-generation DES28. However, just as in the LEADERS trial, higher SXscores appeared to confer an increased risk for repeat revascularisation, in particular TLR29. Larger-scale study data are needed to confirm these findings.

Stratified analysis on whether our patients would have fulfilled the inclusion and exclusion criteria of the ABSORB II trial demonstrated good two-year clinical outcomes in patients who would have been eligible for enrolment (TVR 2.3%, TLR 2.3%, TVF 2.3%). These revascularisation rates, in the group meeting the ABSORB II inclusion criteria, are slightly lower compared with the revascularisation rates demonstrated in the BVS-treated arm at two-year follow-up in the ABSORB II trial (TVR rate of 4.2% and TLR rate of 2.7%). Regarding the composite endpoint of TVF, the ABSORB II trial demonstrated a non-significantly higher TVF rate in Absorb compared with XIENCE DES at two years (8.5% vs. 6.7%, p=0.48). It is important to keep in mind that the ABSORB II trial is powered for angiographic endpoints at three-year follow-up and not for clinical endpoints; therefore, these event rates and p-values should be interpreted with caution.

At this stage it may be advisable to confine the use of the Absorb BVS in daily clinical practice to patients fitting the ABSORB II inclusion and exclusion criteria or low SXscores, until further evidence in “all-comers” patients becomes available. Such a trial, the AIDA all-comers trial, with a primary endpoint of TVF at two-year follow-up, completed enrolment in 201530.

Furthermore, long-term follow-up data (five-year) will be crucial in assessment of this technology, not only because the potential benefits of bioresorbable scaffolds are likely to become evident in the longer term, but also because of reports of scaffold thrombosis as late as 44 months after scaffold implantation31.

This study has the intrinsic limitations of a registry: most importantly, no control group was available to compare the clinical outcome after the use of this device with contemporary devices. Patients were not consecutively enrolled and therefore selection bias cannot be excluded. The registry was confined to one centre and includes 135 patients. Stratified analysis further diminishes the sample size per group. This analysis remains exploratory in character.

In a patient registry reflecting daily clinical practice, including both high-risk lesions and patients, the use of the Absorb BVS was associated with acceptable two-year clinical outcomes. Stratified analysis on SYNTAX score and ABSORB II inclusion and exclusion criteria showed acceptable clinical outcome in less complex patients with a relatively simple coronary anatomy. A higher SYNTAX score and not matching the inclusion criteria of the ABSORB trials, however, appear to be associated with a higher risk of revascularisation in patients treated with BVS.

We thank the members of the clinical events committee, Yoshinobu Onuma and Pannipa Suwannasom for their valuable contribution.